Post Covid-19 70% of investors will still invest in the Luxury market with Apparel & Accessories, Cosmetics & Fragrances and Digital Luxury being the most prominent sectors

Lisbon, 13 July 2020- The spread of the Coronavirus pandemic, the unsteady global political scenario, the new commercial agreements increasingly introducing protectionist policies, together with the more and more pervasive use of advanced digital technologies are deeply influencing the business models in the luxury market. This is the scenario that global investors must face, and where investors interested in the Fashion & Luxury industry must operate, as highlighted by the Global Fashion & Luxury Private Equity and Investors Survey 2020, the Deloitte report that analyzes the luxury market trends and the M&A activities of the sector based on market data and C-level management interviews.

Market perspective: luxury market will grow between 2 and 2.5% per year

The market expects Luxury Hotels, Cruises, Watches & Jewellery and Furniture to be the most affected sectors by the pandemic, while Cosmetics & Fragrances and Private Jets will be the least affected. In terms of post Covid-19 recovery speed, Luxury Hotels, Apparel & Accessories and Cosmetics & Fragrances will be at the forefront, benefiting from the re-open of borders and the increased focus on online sales.

Within the PLG sector, the market expects Europe and the Americas to suffer a longer demand contraction with an expected drop in sales from 30 to 40% and expected recovery time from 12 to 18 months. The mostly adopted strategies to overcome the crisis will be online distribution channels focus, digital marketing and promotion and environmental sustainability.

2019 proved to be a fertile soil for the luxury market, with 271 M&A transactions, a slight but stable increase of +6 deals compared to the previous year.

The Hotels sector, which represents 43% of total, was the best segment in terms of deals growth with respect to the previous year, increasing by #40. Luxury Cars deals significantly increased during 2019 (+6 deals), driven by the very active electric car’s industry. 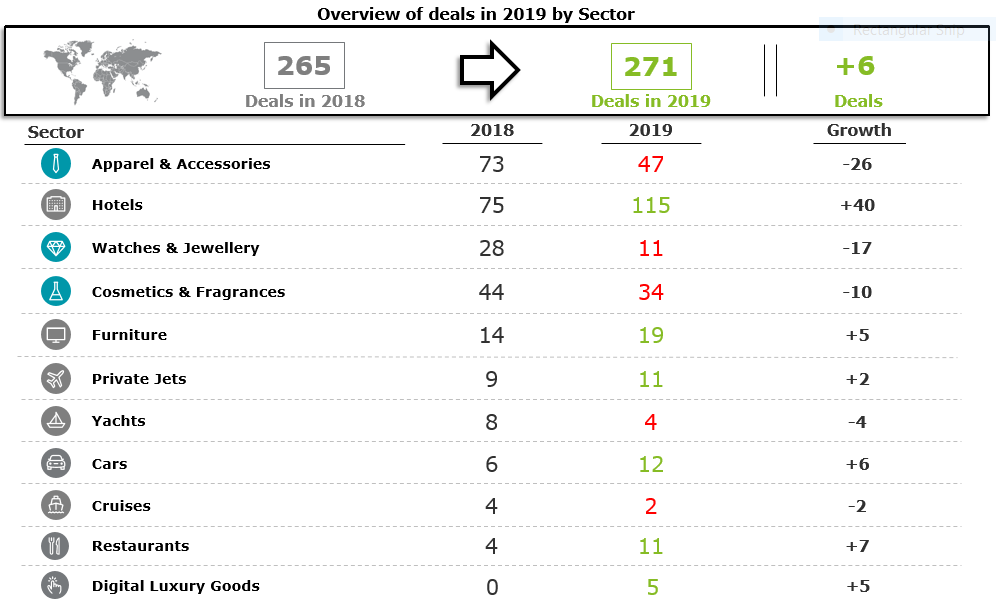 In 2019, strategic investors, representing 55% of total bidders, led the merger and acquisition operations mainly concentrated in the world of "Hotels” and “Other industries”. Financial investors carried out 5 transactions more than last year and represented the 45% of bidders, where the majority is composed by private equity and venture capital.

From the survey results, Deloitte found out that 70% of funds are considering investing in an F&L asset in 2020, with notable interest rising in: Apparel & Accessories (+28 pts), Cosmetics & Fragrances (+15 pts), Digital Luxury (+53 pts) and Furniture (-17 pts). Interest across these categories is increasing compared to previous year, mostly noticeable at Digital Luxury Goods.

Nonetheless, investors foresee a significant Covid-19 impact in the next three years with Cars, Hotels, Restaurants, Cruises and Retailing as the most negatively affected sectors. Apparel, Watches, Yacht and Private jets are expected to remain stable, while Cosmetics & Fragrances and Furniture will show an increase. Digital luxury will be the sector reaching the strongest increase thanks also to a positive effect of the pandemic.

Investors expect the Asian and the Middle Eastern areas to have a faster recover after the negative Covid-19 impact, with a growth of the F&L industry. On the other hand, Europe and Latin America are expected to suffer more, showing a decrease in the next years.

Covid-19 pandemic will also boost the adoption of disruptive technologies. In fact, digital disruptions, such as Big Data & Analytics, Artificial Intelligence (AI) and Internet of Things (IoT) enable companies to keep pace with the virtual customers; given that, luxury companies are seeking for digital startup/companies to exploit synergies. Digital penetration will lead to physical disruption; the classical store will inevitably change from point of sales to point of touch. According to respondents in 2020, 57% will probably invest in disruptive technologies in order to benefit from potential synergies. Internet of Things, Big Data & Analytics and Artificial intelligence will have the largest impact on investors’ portfolios according to respondents in 2020.