Deloitte analysis: The M&A activity slowed down in the third quarter of 2019, but remains solid

The mergers and acquisitions (M&A) market was solid in the third quarter of 2019, with 29 transactions announced, one more compared to the similar period of 2018. According to Deloitte estimations, the total volume, including transactions whose values were not disclosed, was EUR 650-850 million (EUR 1.4-1.6 billion in the third quarter of 2018), while the disclosed transactions amounted to EUR 343 million (EUR 814 million in the similar period of 2018).

“This year’s third quarter saw a solid M&A activity, after an atypical quarter, in which it had strongly accelerated. For the rest of the year, we anticipate the market will remain active, as a significant number of M&A projects are in progress in various industries,” said Ioana Filipescu Stamboli, Corporate Finance Partner, Deloitte Romania.

Out of the total analyzed transactions, only seven had their amount disclosed.

“We notice an increased appetite for acquisitions from the private equity funds which are active on the local market, especially in fields such as specialized retail, medical services or manufacturing, as well as a significant decrease of the number of disclosed transactions. For instance, in the first nine months of this year, there were only 19 disclosed transactions, compared to 28 in the similar period of last year and 44 in the same period of 2017,” added Ioana Filipescu Stamboli.

The biggest transactions announced in the third quarter of 2019

Evolutions of the number disclosed transactions 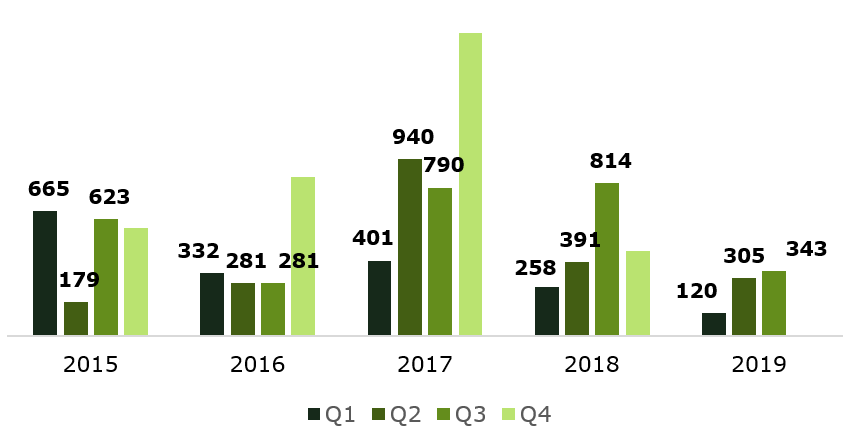 Deloitte Romania is one of the leading professional services organizations in the country providing, in cooperation with Reff & Associates, services in audit, tax, legal, consulting, financial advisory, risk advisory, business processes and technology services and other related services with more than 1,700 professionals.