The 2019 M&A market will count around 100 deals, keeping a similar trend with the 2008-2018 period, according to Deloitte Romania Financial Advisory estimations. Also, the average transactions value for 2019 is estimated by Deloitte Romania between 40 and 50 million euros, slightly above the 40 million euros average in the past decade.

“Despite the harsh fiscal context at the beginning of 2019, we do not anticipate major consequences on the M&A market in the first half of the year, but rather towards year-end, when the window of opportunity may close, depending on the macroeconomic context. We expect the most dynamic sectors of the M&A market in 2019 to be technology, retail, healthcare, consumer goods and real estate,” said Ioana Filipescu, Corporate Finance Partner, Deloitte Romania.

The 2018 Romanian M&A market, estimated by Deloitte Romania between 3.8 and 4.3 billion euros, including deals with undisclosed value, was less transparent than in the previous years, with a significant decrease in the number of deals with disclosed values. Considering the disclosed values, the market continued to be dominated in 2018 by strategic investors, which were involved in 56% of the transactions, while the private equity funds were at 39% of the disclosed volume.

As far as the 2016-2018 M&A deals with disclosed values are concerned, Romanian companies’ total value has been assessed at an average of 8.5 x EBITDA, slightly above those in the CEE area, of 7.8 x EBITDA, according to a Deloitte Romania analysis based on Mergermarket data.

“Over the past three years, the industries with the highest EBITDA multiple in Romania have been consumer products, healthcare and TMT – technology, media and telecommunications -, while the lowest have been construction and retail,” added Marius Vasilescu, Financial Advisory Director, Deloitte Romania.

The Romanian banks sold non-performing loans (NPL) portfolios with a face value of 1 billion euros in 2018, according to Deloitte Romania estimations, significantly down from 2.1 billion euros, in 2017.

“The significant decline of NPL transactions in 2018 is the result of a decreasing non-performing loans stock and of the legislative changes. We expect the NPL transactions to further decrease in 2019, considering the present context, even though banks still have an on-balance sheet stock of non-performing loans estimated at 3-4 billion euros, as well as a similar volume off balance sheet,” said Radu Dumitrescu, Partner Transaction Support, Deloitte Romania.

In 2018, Deloitte Romania’s Financial Advisory team has been involved in over 100 complex projects across its business lines, which cover corporate finance advisory, forensic, financial valuation, economics and modeling, as well as transaction support and reorganization services. With a team of 60 dedicated professionals, Deloitte’s Financial Advisory practice is one of the most prominent market players in Romania, providing services to domestic and multinational clients, private as well as governmental.

Deloitte Romania is one of the leading professional services organizations in the country providing, in cooperation with Reff & Associates, services in audit, tax, legal, consulting, financial advisory, risk advisory, business processes and technology services and other related services with more than 1,200 professionals. 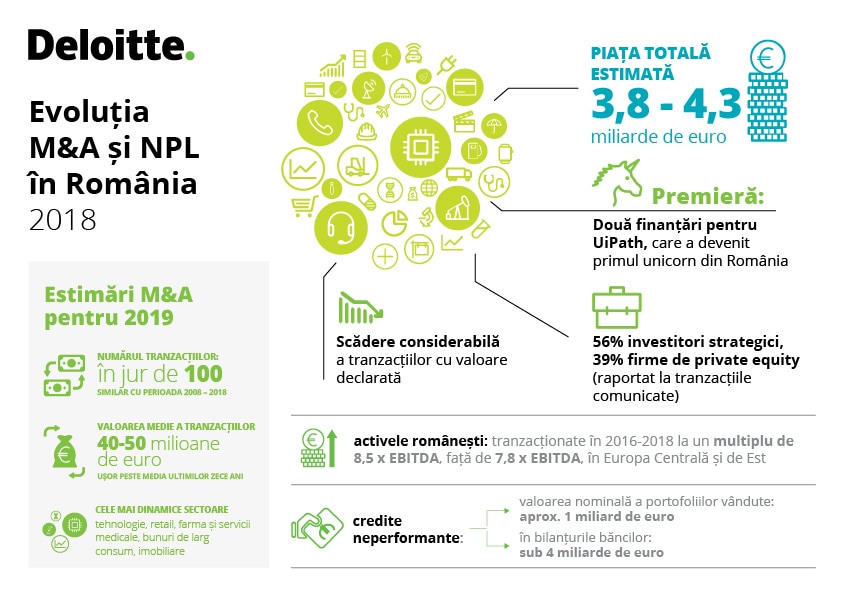