What we do has been saved

What we do has been removed

An Article Titled What we do already exists in Saved items

With teams around the globe, we have broad and deep experience of delivering strategic advice, including assessing economic impact, to major sporting events worldwide

Our differentiating expertise creates fantastic opportunities with our clients. 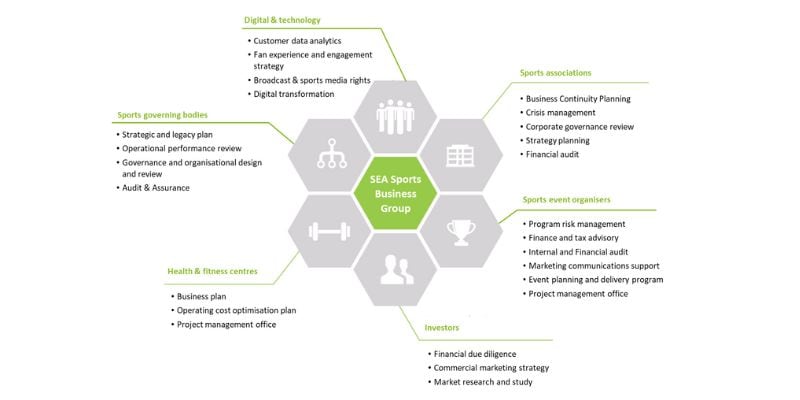 To enhance our support for athletes, Deloitte developed our unique in house programme called Deloitte Ignite . Over 90 current and retired national athletes have worked in Deloitte since the Deloitte Ignite programme was launched in late 2014, making Deloitte the largest employer of Team Singapore athletes in the nation.

James Walton was also one of 9 ‘industry leaders’ appointed to SportSG’s original spexBusiness Advisory Panel and was recently reappointed for another term, and Deloitte has helped introduce several major companies to the program including Fullerton Healthcare.

Deloitte has also sponsored and supported numerous SportSG and Team Singapore initiatives including greenhouse workshops on key strategic issues including the development of the Athlete Data Management System and the creation of Singapore’s new coaching academy. We also helped develop and facilitate the SEA Games and APG teambuilding camps in 2015 and 2017, sponsored and spoke at the 2016 IASF Forum and sponsored the launch of a book on athlete sponsorship developed with SportSG.

Deloitte has been a proud supporter of Singapore Disability Sports Council over the years and continues to support athletes, community organisations and para sports in Singapore.

Deloitte is a proud supporter of Team Singapore employing many national team athletes, being members of Sport Singapore’s Business Network and having a seat on the Business Advisory Panel. Deloitte is committed to Singapore and committed to deliver the dreams of a nation.