Developments in the charity sector has been saved

Developments in the charity sector has been removed

Developments in the charity sector

We have highlighted a few reports and changes which may have an impact on your charity. The first relate to COVID-19 but we have also flagged climate change, cyber and other issues that trustees may have on their agenda.

The Charity Commission for England and Wales guidance to help with running your charity during the coronavirus (COVID-19) outbreak was last updated on the 8 January 2021. This page is regularly updated to provide additional guidance for charities, and assurance that the Commission's approach to regulation during this uncertain period would be as flexible and pragmatic as possible in the public interest, whilst helping trustees to be aware of and think about the wider or longer impact of their decisions on their charity. The latest updates give further guidance on virtual meetings and legal considerations around holding AGMs, particularly considering the impact of the further lockdown.

Guidance on the government funding response to COVID-19 is also maintained on the Deloitte website. This has been updated to cover the extensions to the coronavirus job retention schemes and extension amongst other government support.

The Charity Commission reminds those charities wanting to help that they must first consider whether that help is within their charity’s existing charitable objects.

Specific guidance for charities and trustees on the accounting implications was also issued on 23 March and can be found on the SORP microsite.

This includes considerations around going concern and the disclosure of post balance sheet events.

Trustees may also find the guidance published by the Financial Reporting Lab of the Financial Reporting Council in October 2020 which updated some of its earlier work useful. The two short guides (COVID-19 – Resources, action, the future and COVID 19 – Going concern, risk, and viability) highlight the importance both of providing specific assumptions around going concern scenarios and about integrating the impact of COVID-19 into their principal risks rather than dealing with it in isolation.

Guidance for charities registered in Scotland was initially published by OSCR on 30 March and is available at https://oscr.org.uk/guidance-and-forms/covid-19-guidance-for-charities/

The Charity Commission published guidance on the 23 April which can be found at https://www.gov.uk/guidance/manage-financial-difficulties-in-your-charity-caused-by-coronavirus to support trustees with some basic practical steps to maintaining and monitoring the going concern status of the charity, the main point being that trustees must always consider the best interests of their charity, which may include merging or working with others.

Trustees may also find the guidance published by the Financial Reporting Lab of the Financial Reporting Council in October 2020 which updated some of its earlier work useful. The two short guides (COVID-19 – Resources, action, the future and COVID 19 – Going concern, risk, and viability) highlight the importance both of providing specific assumptions around going concern scenarios and about integrating the impact of COVID-19 into their principal risks rather than dealing with it in isolation.

Trustees should remember when considering their funds that whilst they have discretion over general and designated funds they may need approval from the donor to re-purpose restricted funds. If a charity is considering accessing permanent endowment assets, Charity Commission agreement should be sought.

For charitable companies qualifying as large under the Companies Act 2006, there is now a requirement for periods commencing on or after 1 April 2019 to report on energy use and carbon emissions. The SORP Committee has published Information Sheet 5 to assist charities in making the disclosures.

There are some exemptions, for example if the charity consumed less than 40,000kWh of energy during the period.

In November 2020, the FRC published Climate Thematic and its thoughts on how to raise the bar in climate reporting. Its main findings included that evidence of climate considerations influencing business models and strategy was limited and whilst some strategic goals were set it was unclear from the reporting how progress towards the goals would be achieved, monitored or assured.

Whilst the Task Force on Climate-related Financial Disclosures (TCFG) framework does not directly apply specifically to charities, there is growing public opinion that these issues should be on the Board agenda. There is further guidance on climate change and the impact on narrative reporting in our publication A closer look | climate change.

For further information on the question “what does climate change mean for business?”, please see our website www.deloitte.co.uk/climatechange.

The Charity Commission for England and Wales in Spring 2020 sought views on responsible investment:

"Trustees have a duty to maximise the financial returns generated from the way in which they invest their charity’s assets, but the Commission also encourages them to consider whether their investments are consistent with their charity’s aims. As public expectations and attitudes evolve, there are welcome signals that charities are thinking about how to reconcile achieving good returns with responsible investments that align with the charity’s mission and purposes. Many in and around the sector are championing this way of thinking and leading the way, but as the regulator we want to understand what is holding others back, and give more charities the confidence to follow suit where possible."

Following their listening exercise the Charity Commission published the feedback in November 2020. The barriers identified included:

The Charity Commission will now consider how best to address these concerns.

The survey also reported that the nature of cyber attacks had changed since 2017, and that over this period, there had been, among those identifying any breaches or attacks, a rise in organisations experiencing phishing attacks (from 72% to 86%), and a fall in viruses or other malware (from 33% to 16%). A separate infographic has been produced to focus on the impact on charities. The summary highlights that 38% of charities update their board at least quarterly and 31% have insurance against cyber risks. Half of the charities surveyed said that they have sought information but only 16% had heard of the National Cyber Security Centre’s Small Charity Guide.

The Charity Commission updated its guidance protect your charity from fraud and cyber crime in October 2019. It includes reference to the National Cyber Security Centre’s toolkit designed to encourage essential cyber security discussions between the Board and their technical experts. The toolkit sets out a number of challenging questions for Boards about ‘what good looks like’ in different contexts, for example, risk assessment, collaboration and developing a positive cyber security culture. This guidance also includes 8 guiding principles for tackling charity fraud which are particularly relevant in this current pandemic environment.

We would recommend that trustees review this guidance and ensure that cyber considerations are established as part of the charity’s operational considerations and that there are reporting routes and planned incident responses designed and tested for potential and actual cyber security breaches.

In October 2020 as part of charity fraud awareness week the Charity Commission for England and Wales issued a press release which stated :

“charities have reported being victims of fraud or cybercrime 645 times since the start of the pandemic in March, amounting to £3.6 million in total losses to charities. The true scale of fraud against charities is believed to be much higher, as fraud is known to be underreported.”

The regulator is concerned that remote working and virtual activities and sign-off processes, combined with charities’ tendencies to place goodwill and trust in individuals, may make them especially vulnerable.

Research by the Charity Commission in 2019 (Preventing Charity Fraud - insights and action) suggests that over a third of those committing fraud were the charity’s own staff members; trustees and volunteers together were responsible for 28%; and beneficiaries were identified in 13% of known frauds. The report also found that two thirds of frauds were picked up by financial controls or audit, so simple checks and controls, along with a strong counter-fraud culture can be key.

We would recommend that trustees review their controls, or management’s assessment of the control environment and be particularly mindful of where controls have changed from face to face, paper based controls to on-line communication with electronic documentation, and assure themselves that the controls remain suitable to address the risks.

Regulating in the Public Interest

The Charity Commission for England and Wales and Populus in May 2020 reported the results of a survey titled Regulating in the public interest – the relationship between Charity, charities and the general public.

The report identifies one of the key roles of the regulator is to make charities more resilient which means upholding the special meaning of Charity and recognising that the regulator and the regulated both have a responsibility to justify the privileges enjoyed in its name. The survey identified some key expectations that influenced public trust in charities and therefore potential areas for regulator focus.

The perceived importance of charities to society had fallen from 72% of respondents in 2008 to 55% in 2020. And whilst 55% of respondents considered charities to be the best way of channelling support for good causes, 45% considered other alternatives including volunteering and more community activities including food banks. The report shows that while spending on charitable activities is a key factor in public trust there is much less confidence in charities actually ensuring that the money raised goes to those they are trying to help. Source:Regulating in the public interest - The relationship between Charity, charities and the general public May 2020 (Populus and the Charity Commission)

The Charity Commission for England and Wales and Populus in June 2020 reported the results of the regular survey considering the public trust in charities. 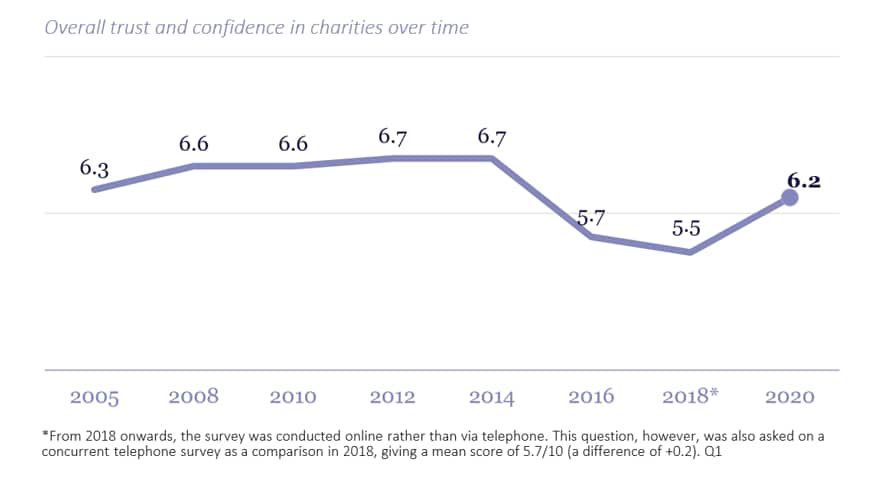 Source:Trust in Charities 2020 – overview of findings (June 2020) (Populus and the Charity Commission)

The report identifies that trust in charities has increased but is still below 2014 levels.

This change in perception means that charities move up one rank and are now trusted more that the ’ordinary person’ but remain below doctors and the police.

Resources reaching intended recipients remains the number one priority for the public in judging a charity, and being registered by the Charity Commission gives an overwhelming majority confidence that this is happening.

In November 2020 the Charity Commission for England and Wales published five, five minute guides to some key topics to mark Trustees’ week. These guides are a quick reference point for issues as they arise and include links to more detailed guidance and support to help trustees navigate to further advice.

The topics covered are listed below and they explain the basics of:

These guides provide a useful source of information for Trustees can could be included as part of induction and on-going training, with deeper dives available for issues as they arise.

The Charity Commission newsletter 65 contains some useful links for charities regarding the UK and EU transition.

Here is what you need to do if your charity:

There is also a range of guidance for DCMS sectors on GOV.UK.

“The register has an important role to play in informing and inspiring that generosity. And my principal ambition for the new register is that it is used, and used increasingly widely, in helping people make informed choices about the charities they want to support.”

One of the key features of the new register is the disclosure of how many staff members receive pay packages of £60,000 and above. The most regularly searched for information should now appear on the landing page or within a one-click menu of further options.

The Charity Commission blog in December 2020 highlighted work a review that the Charity Commission has done into pension deficits as a result of an almost doubling of charities reporting a pension deficit between 2012 and 2018. The investigation found that, while the risk was in general being handled appropriately, most charities did not report the matter in enough detail in their trustees’ annual report.

Specific advice on managing a pension scheme deficit can be found via the Pensions Regulator.

Developments in the not-for-profit sector - January 2020

Developments in the not-for-profit sector - January 2019

Developments in the not-for-profit sector - October 2018

Developments in the not-for-profit sector - March 2018

Developments in the not-for-profit sector - September 2017

Jonathan is a Partner in Deloitte’s Public Audit Group and has 20 years’ experience of auditing with the Firm. He is passionate about working with organisations that operate for the public benefit, an... More