Intellectual Property and Artificial intelligence has been saved

Intellectual Property and Artificial intelligence has been removed

‘By far the greatest danger of artificial intelligence is that people conclude too early that they understand it.’ ― Eliezer Yudkowsky

With the continued advances in artificial intelligence (AI) driven specifically by the field of machine learning (ML) and the evermore pervasive use of these approaches in consumer products, it is of little surprise that the rate of patent filing in this field is increasing so rapidly. In particular, companies in the AI/ML field are increasingly interested in the limitations and requirements for patenting their technology. This is reflected across the industry, from large technology giants to start-ups making their first investments to protect their AI inventions.

The European Patent Office (EPO) and the US Patent and Trademark Office (USPTO) have both recently issued guidelines that seek to clarify what can and cannot be considered patentable inventions in cases where AI is involved. In this two-part article, we will begin by discussing briefly the terminology and concepts in AI, some context on patenting software in general and an examination of recent guidance from the EPO. In part two, we will cover the guidance issued by the USPTO and look at some broad patent-filing trends in AI over the last 20 years.

This article is primarily intended for those interested in the patentability prospects of AI and machine learning, such as Intellectual P roperty (IP) managers or professionals developing a company’s AI technology. However, no specific technical knowledge is needed and the article may also be of use to those with a general interest in the current state of AI research and development.

Historically, most algorithms, and so most programmes and software, are functional. Inputs are supplied and outputs are computed according to instructions a human has written. One could introduce (pseudo) random elements but fundamentally a human has ‘told’ the machine what to do. In comparison, AI aims to let a computer perform tasks that we might call ‘reasoning’ or ‘adapting’.

You might imagine that someone could write a programme by hand that imagines every possible scenario a machine would ever encounter and has an optimal action or decision in each scenario. If this were large and complex enough, it might give the impression that it is capable of some kind of ‘reasoning’ or ‘adapting’. In practice, of course, this is impractical and it is impossible to anticipate every possible situation a computer or machine may encounter.

Instead, most AI relies on ML, which is a subset of AI that describes a process where the behaviour of the system is learned rather than manually coded. Some implementations of ML are extremely basic, some are very complex. Like the whole AI field, it represents a broad spectrum, but remains a useful term especially in patents because it encompasses so many different types of algorithm.

To dispel a popular misconception, it is not the case that you cannot patent software at all. However, it is also not true that all software inventions are automatically patentable. Although it varies depending on jurisdiction, and more detail will be given below, the general stipulation is that software or algorithms can form part of a patentable invention. It is not usually possible to patent software if it is not in the context of a specific use to solve a specific problem.

Superficially, AI may seem like an extension of existing cases of patenting software. However, AI in particular is garnering considerable attention because it often forms a core part of inventions in its own right. Perhaps even more so than has ever been true with algorithms in general. Companies are beginning to become highly specialised in deploying particularly good or useful AI (generally ML) models that can be applied to a range of problems, in contrast to previous generations of software that are only applied to specific use-cases. This is part of the reason patent offices are currently devoting time to clarifying guidelines on patentability. 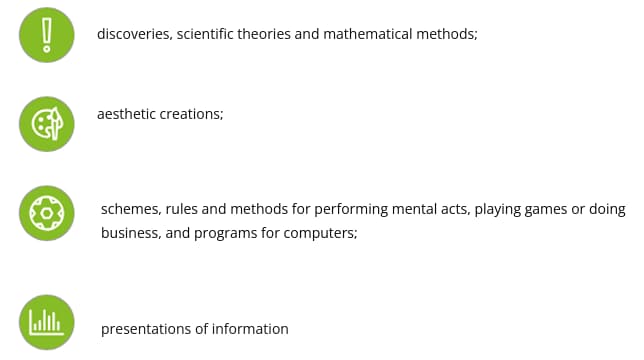 The third of these exclusions would appear to preclude software from patentability entirely (as does the first exclusion, since nearly all algorithms can be said to be ‘mathematical methods’). However, the Act clarifies that these exclusions only apply to inventions that comprise the exceptions listed above ‘as such’. In other words, while not eligible for patent protection in isolation it appears software can form part of a patentable invention.

Perhaps the most important terminology to consider with regards to EPO patentability of software is the ”technical character” of an invention, referenced repeatedly in EPO cases and guidelines.3  This has been the focus of clarification that seeks to present examples where mathematical methods or software contribute to the ‘technical means’ by which a problem is being solved, and are thus eligible for patentability.4 These examples include:

These examples seem to show that, although unlikely to be eligible for patent protection on its own, an algorithm may be eligible if it is used as part of an invention that does something that is ‘technical’.

In a 2020 conference, the EPO explicitly clarified that AI inventions are subject to the same type of scrutiny as other “computer-implemented inventions”. From the previous examples, it can be inferred that the EPO is more likely to grant patents to AI/ML inventions that interact with videos, images, machines, text (to an extent) or other external factors than to algorithms that simply sort or tag data. Again, the question of the problem solved being ‘technical’ must be considered. In the past, the EPO specifically ruled against a ML system to generate customer bills. It also rejected a ML document classifier becauseit was regarded by the appeal board as being too ‘obvious’ a use of ML to warrant protection.

At a 2018 conference on patenting AI, it was reaffirmed that the EPO asks of AI/ML inventions: ”Do(es) the AI and ML method (steps) contribute to the technical character of the invention?”. Elaborating on the recurring use of the term ”technical effect”, it was recommended that applicants include in the specification of their invention ”as much information about the technical effect as possible” to increase likelihood of acceptance.

Examples of AI patent filings in the EPO

These are a few granted EPO filings that involve AI/ML. The first is typical of grants where the ML architecture (in this case a neural network) is given less prominence than the specific problem being solved. The method is framed as a way of helping drive a vehicle and the neural network is simply a means to an end (the same way any other software might be). The second is similar, with relatively specific independent claims that focus on the ”technical problem” of processing and identifying the voice input of a user, where the application of a neural network is mentioned as being a component of this process. Both of these serve to highlight cases where a specific ”technical problem” has been addressed and where ML is at least part of the way the problem is being solved. In other words, the assignees have not tried to patent the ML methods in isolation.

The third example takes the approach of not mentioning ML explicitly within the claims. There is reference only to a ‘failure condition estimation unit’, and a single line within the descriptive text clarifies that this may be “configured by a learned model (a so-called artificial intelligence (AI) program)”. This method of so-called ‘black boxing’ the ML portion of an invention is fairly typical, although it can lead to pitfalls with regards to prior-art1 if the claims are overtly broad.

In general claims will refer to ‘modules’ that can ‘automatically’ perform analysis or tasks, and then in the longer patent description it may mention that these might use ML/AI (often listing a few example methods). This not only helps to de-emphasise the AI itself in favour of the solution of the broader ‘technical problem’, it can help also help assignees who do not wish to give away too much detail of exactly how their proprietary AI/ML architecture might work.


Filing AI patents in the EPO

As much as it might seem like there are very high standards or restrictions on what can be patented within the EPO (with regards to AI), the fact is that filings are happening, and are happening increasingly frequently. A patent landscape report can be invaluable in identifying the filing behaviour of competitors, as well as identifying untapped areas of invention. Capturing new AI inventions as they appear is also crucial to developing a robust filing strategy, and ensure valuable patents are secured.

Please come back next month where we will discuss the comparable advice from the US Patent and Trademark Office (USPTO) and some broad trends in patent filing in the last 20 years.

Deloitte’s dedicated team of IP experts helps clients to implement end-to-end IP strategies increasing the overall value of their business. Our data-driven innovation and intellectual property strategies enable clients to plan, protect and profit through the strategic management of their IP assets.

1EPO definition:
“Prior art is any evidence that your invention is already known. Prior art does not need to exist physically or be commercially available. It is enough that someone, somewhere, sometime previously has described or shown or made something that contains a use of technology that is very similar to your invention.”

Chris is an experienced assistant manager in Deloitte’s IP Advisory team, with specialisation in machine learning and AI patents. He has extensive experience in all aspects of IP services and has deve... More