Premier League clubs generated £4.5 billion of revenue during the 2019/20 financial year, according to analysis from Deloitte’s Sports Business Group, a decline of 13% compared to 2018/19 (£5.2 billion). This is the first time that Premier League clubs have cumulatively reported a year-on-year fall in revenue.

Under normal circumstances, clubs have a financial year-end that aligns with their domestic season. However, the disruption to the 2019/20 football season has resulted in club revenues for that season being spread across the two financial years ending in the summers of 2020 and 2021.

As a result, clubs have seen some of their revenue for the 2019/20 season being deferred into the 2020/21 financial year as matches were delayed from spring into summer of 2020, beyond their 2019/20 year-end and other revenue, primarily matchday revenue and broadcast rebates, permanently lost. Overall matchday and broadcast revenue decreased by 13% and 24% respectively compared to the prior year. In terms of broadcast revenue deferred from the 2019/20 financial year into 2020/21, while this will provide a boost to 2020/21 revenues, the gains will be outweighed by the near total absence of matchday revenues for that season.

Dan Jones, partner and head of the Sports Business Group at Deloitte, commented: “The decrease in revenue in the 2019/20 season is, unsurprisingly, down to the global economic and social disruption caused by the COVID-19 pandemic and will continue to have a heavy impact on the 2020/21 season’s financial results when available.

“The absence of fans, postponement of matches and rebates to broadcasters had a significant impact on the revenue clubs have been able to generate. Nonetheless, whilst this has been the most challenging period for all concerned in the football industry, Premier League clubs showed impressive resilience in mitigating the financial impact of the COVID-19 pandemic. By completing the 2019/20 season in full, live football provided a great boost to the public and valuable content for broadcasters.”

The analysis reveals that Premier League clubs’ aggregate wages-to-revenue ratio increased to a record high of 72% in 2019/20, as a result of the decrease in year-on-year revenue.

“In this extraordinary year it is difficult to read too much in to whether this marks a shift in clubs’ approach to wage spending, or one-off elements such as the absence of end-of-season bonuses, which will have been deferred to the next financial year, or the impact of temporary wage cuts or deferrals. With wages always representing the largest cost for football clubs we will watch with interest in years to come to understand whether this financial shock will come to be seen as having caused a change in approach and greater control over wage expenditure.”

With the decrease in revenue and a general inability to reduce costs that clubs had committed to incur, Premier League clubs made a collective pre-tax loss of almost £1 billion, (2018/19: £0.2 billion loss) which is the largest pre-tax loss in Premier League history. Less than a quarter of the Premier League clubs reported a pre-tax profit and those that did had generally extended their financial year-ends to become a 13-month accounting period, thus bringing in another month of the delayed season’s matches and reducing the revenue deferred to the next financial year.

Jones added: “The full financial impact of the pandemic on the Premier League will depend on the timing of the return of fans to stadia in significant numbers and the ability of clubs to maintain and develop their commercial relationships, in particular at a time when many other industries are suffering. Matchday operations are a cornerstone of a club’s business model and fans’ absence will be more fully reflected in the financial results of the 2020/21 financial year, covering a larger period of the pandemic.

“Nonetheless, and with the recent announcement of a renewal of the Premier League’s domestic broadcast rights on similar terms to those currently in place, once fans are able to return in full, hopefully during the 2021/22 season, Premier League clubs have the potential to again return to record revenue levels.”

Full analysis of football clubs’ finances will be published in the next edition of the Deloitte Annual Review of Football Finance in July 2021.

Notes to the editor 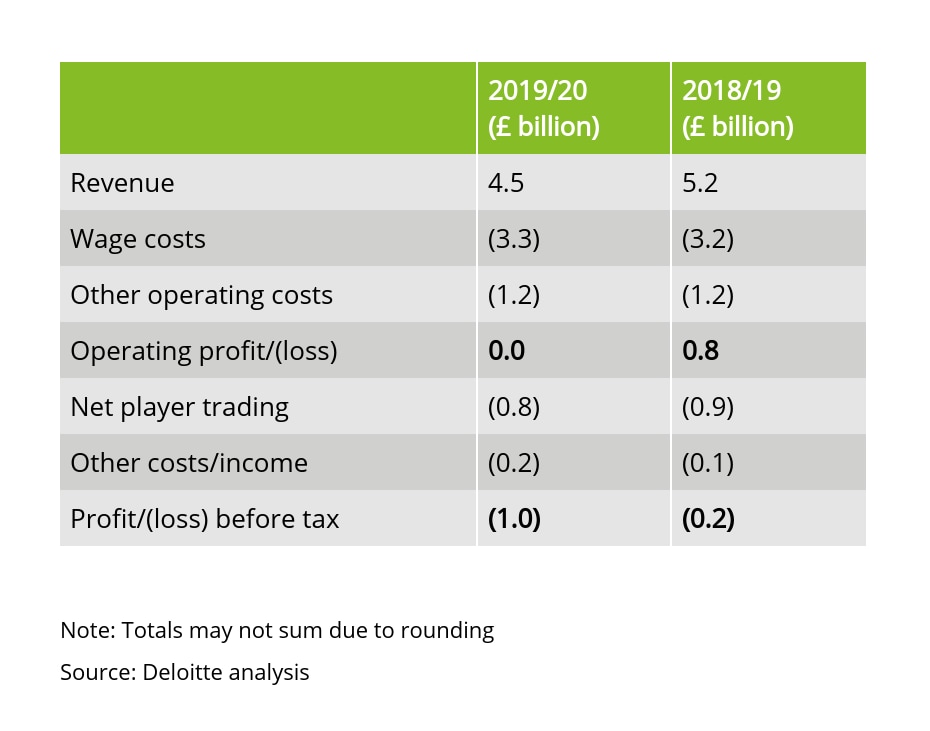 The analysis of the financial results of Premier League clubs for 2019/20 has been based on figures extracted from the latest available company or group financial statements in respect of each of 18 clubs and informed estimates for the remaining two, which at the time of writing, have not released their financial statements or produced a press release.

In general, the financial figures are extracted from the annual financial statements of the legal entity registered in the United Kingdom which is at, or closest to, the ‘top’ of the ownership structure in respect of each club. In some cases Deloitte has made adjustments to club’s figures to enable, in our view, a more meaningful comparison of the football business on a club by club basis and over time.

The published financial statements of clubs rarely split wage costs between playing staff and other staff. Therefore, references to wage costs relate to total wage costs, including both playing staff and other staff. For the purpose of this analysis, references to operating result (profit or loss) is the net of clubs’ revenues less wages and other operating costs, excluding player trading (amortisation of transfer costs and profit/loss on disposal of players) and certain exceptional items.

Over the last 30 years Deloitte has developed a unique focus on the business of sport. Our specialist Sports Business Group offers a multi-disciplined expert service with dedicated people and skills capable of adding significant value to the business of sport. Whether it is benchmarking or strategic business reviews, operational turnarounds, revenue enhancement strategies or stadium/venue development plans, business planning, market and demand analysis, acquisitions, due diligence, expert witness, audits or tax planning; we have worked with more clubs, leagues, governing bodies, stadia developers, event organisers, commercial partners, financiers and investors than any other adviser.