Dan Jones, partner in Deloitte’s Sports Business Group, commented: “This has been a remarkable transfer window. Club spending records have been broken, player moves - including the two greatest players of their generation - have grabbed the headlines and Premier League clubs have spent in excess of £1 billion for the sixth summer in a row. Perhaps most remarkable is that all this has been achieved with lower spending than we have seen in the previous two summers.”

Arsenal, Manchester United, Manchester City and Chelsea were the top four biggest gross spending Premier League clubs and were responsible for the four highest-value individual transfers this window. All transfers were valued at £50m or more, double the two transfers in summer 2020 of that scale, demonstrating the financial capabilities of the highest revenue generating clubs.

A key metric to understand Premier League clubs’ overall approach compared to previous windows is to assess their net transfer spend as a proportion of their estimated revenue. Last year this totalled 18% compared with an estimated 10% this year, a marked and concerted reduction as clubs look to spend within their means.

Tim Bridge, director in Deloitte’s Sports Business Group commented: “Whilst this summer transfer window saw gross spending fall by 11%, many would have actually predicted the drop to be much larger. Even with the pressures of a pandemic, there have been a number of high-profile deals, with some of the highest revenue generating Premier League clubs flexing their financial muscles to strengthen their competitive position both domestically and at a European level.”

Outside of the ‘big six’, significant deadline day activity by West Ham, Leeds United, Brighton and Hove Albion and Crystal Palace contributed £90m (59%) of the total deadline day expenditure, as clubs looked to reinforce their squads with the lucrative aims of achieving qualification for UEFA competition and/or retaining their Premier League status.

Free rein: window sees increase in volume of free transfers
Whilst overall spending decreased, the volume of transfers remains relatively consistent with historic levels, with Premier League clubs’ having signed 148 players-in (on either a permanent or loan-basis). This compares to 132 transfers-in during summer 2020 and 128 in summer 2019.

Interestingly, Deloitte’s analysis shows that the percentage of players acquired on a free transfer increased from 20% to 22% during this window. Only four Premier League clubs did not acquire a player on a free transfer in the summer window, half the number compared with last year.

Jones added: “Whilst the volume of transfers has remained consistent, the number of free transfers has increased as have the number of the highest value deals. This reflects twin forces of clubs prioritising financial stability and seeking value in the market while also being willing to pay for the very best talent. This pattern has been reinforced by the financial impact of the COVID-19 pandemic and the relative financial strength of the Premier League clubs compared to some of their European peers.”

European spending dwarfed by Premier League
Behind the Premier League, Serie A €550m (£475m) is the next highest spending league, although Premier League clubs’ gross transfer spend is still more than double that of Serie A clubs.

With the exception of the Bundesliga, gross transfer spend is down for all other ‘big five’ leagues for the second consecutive year. Bundesliga clubs have reported a net surplus of €40m (£35m) which is largely driven by sales to the Premier League of key players such as Jadon Sancho (£73m), Ibrahim Konaté (£35m) and Leon Bailey (£25m).

La Liga clubs are the lowest spenders at a gross level for the second consecutive year. This is largely driven by the relatively restrained spending of Barcelona and Real Madrid, with both generating a net transfer surplus during this window.

Bridge added: “Both of the major Spanish clubs are looking to shore up their finances and, at a time where their stadium redevelopment projects are planned or underway, they have not been able to take their usual approach in the transfer market. Challenging times lie ahead in the short-term for both, who will appreciate the financial boost that return of fans to stadia bring more than most clubs.”

Relegated side Fulham accounted for 55% of gross transfer spend in the Championship, largely driven by the purchase of Harry Wilson from Liverpool for £12m. Due to the stretched financial position many Championship clubs find themselves in, the number of clubs that have acquired a player for a fee has reduced from 18 to just seven clubs.

Whilst overall Championship clubs have a net transfer surplus of £60m, this is 77% worse than the prior year due to the post-pandemic market and the substantially lower volume of transfers to the Premier League. Premier League clubs have only purchased six players from the Football Leagues this window compared to 22 in summer 2020.

Dan Jones concluded: “With reduced activity from Premier League clubs acquiring from the Football League, the financial challenge of running a Championship club is going to be tougher than it ever has been. This is perhaps indicative of Premier League clubs being less willing to take a risk on players unproven at Premier League level, in conjunction with a plentiful supply of more established talent not only in the Premier League but across Europe’s top tier football leagues.”

Summary of key findings from the analysis by Deloitte’s Sports Business Group include: 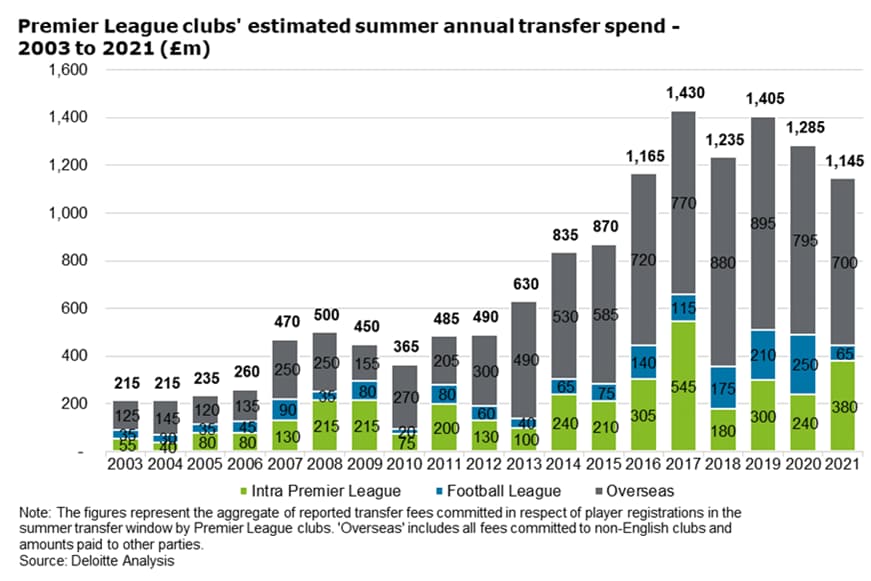 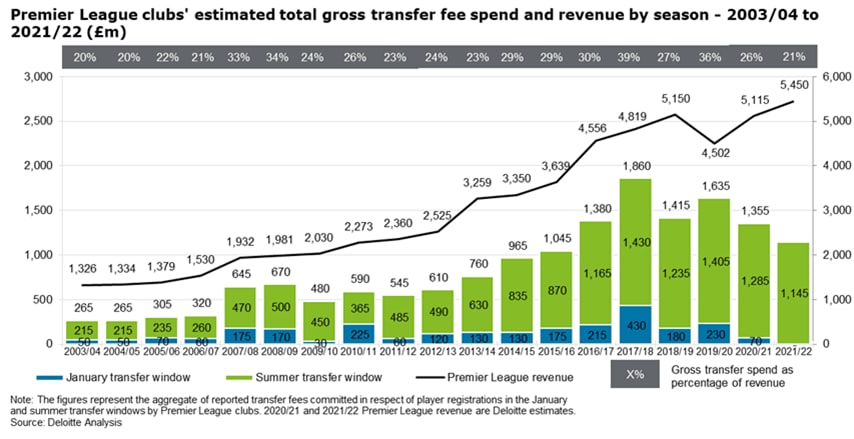 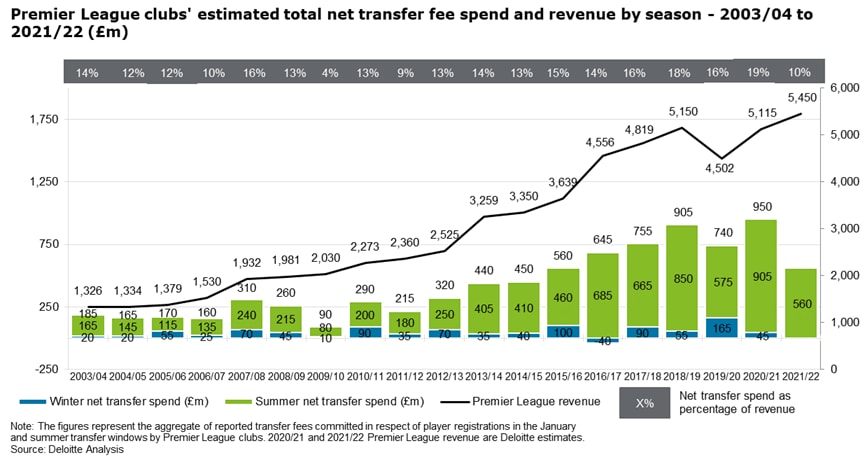 Note to editors
The transfer window for the Premier League, English Football Leagues, Bundesliga, La Liga, Ligue 1 and Serie A all closed on 31 August 2021.

The information on player transfers is based on publicly available information in respect of player registration acquisitions by clubs, including from club websites, www.bbc.co.uk and www.premierleague.com, and further analysis carried out by the Sports Business Group at Deloitte. The information is based on reported transfers as at 23:00 on 31 August 2021. Further commentary about the transfer market is included in the Deloitte Annual Review of Football Finance. The figures contained in this release will not necessarily be the same as the cost of acquiring players’ registrations as recognised in the financial statements of each club. Under accounting requirements, the cost of acquiring a player’s registration includes the transfer fee payable (including any probable contingent amounts), plus other direct costs such as transfer fee levy and fees to agents. The exchange rate at 31 August 2021 has been used to convert figures between euros and pounds sterling (£1 = €1.17).

Over the last 30 years Deloitte has developed a unique focus on the business of sport. Our specialist Sports Business Group offers a multi-disciplined expert service with dedicated people and skills capable of adding significant value to the business of sport. Whether it is benchmarking or strategic business reviews, operational turnarounds, revenue enhancement strategies or stadium/venue development plans, business planning, market and demand analysis, acquisitions, due diligence, expert witness, audits or tax planning; we have worked with more clubs, leagues, governing bodies, stadia developers, event organisers, commercial partners, financiers and investors than any other adviser.