HMRC has published its latest statistics in respect of the UK’s R&D and patent box regimes for the tax years 2019/20 and 2020/21. Key takeaways from the announcements are as follows:

HMRC has published its up-to-date statistics regarding the United Kingdom’s R&D and patent box regimes in respect of the tax years 2019 to 2020 and 2020 to 2021. Broadly speaking, the statistics provide an overview of the total number of claims made during the periods, and a ballpark stratification of the claims by value and by frequency in terms of industrial sector, region, and company size.

For both the R&D and Patent Box regimes, claimants have until two-years after the end of the relevant accounting period, as defined in the respective legislation for each regime, to submit a claim to HMRC. We expect, therefore, that, as HMRC recognises further claims, an updated dataset will be compiled. According to the Government’s website, these updated statistics will be released in August 2023.

The projected total number of R&D claims for the tax year 2020 to 2021 has increased by 7% in comparison to the prior tax year, which brings the total number of claims submitted during the period to approximately 89,300. This total figure comprises of 78,825 Small- or Medium-sized Enterprise (SME) scheme claims and 10,475 Research & Development Expenditure Credit claims (RDEC). This represents an increase for both schemes in comparison to the prior tax year (2019/20).

This £6.6bn of tax relief can be disaggregated into £4.2bn claimed through the SME scheme and a further £2.4bn claimed through the RDEC scheme. Note, however, that of the £2.4bn in RDEC tax relief, approximately £365mn, or 15%, is received by SME companies claiming under the RDEC regime for subcontracted R&D projects with either grant funding or expenditure that exceeds the SME scheme aid cap.

It is worth noting the figures show that, for the 2020/21 tax year, although the total volume of claims submitted under the SME regime is larger than those under RDEC, the average size of each claim is significantly larger for the RDEC regime than under its SME alternative.

According to projected figures, approximately 72% of claimants in the tax year 2020/21 will receive support up to £50,000, which corresponds to the large volume of claims made under the SME scheme. Despite of this, the figures nonetheless suggest that 26% of the total relief granted is captured by claims that are in excess of £2mn. This is a clear indication that a few large companies continue to receive a not insignificant amount of the tax relief available.

The total amount of identified R&D expenditure used to claim R&D tax relief is estimated to be £38.1bn for the tax year 2020/21, a decrease of almost 11% on the prior tax year. Of this total, 59% was incurred by companies claiming under the RDEC regime.

The majority of claimants in the tax year 2020/21 are found in the ‘Information and Communication’ (22%), ‘Manufacturing’ (21%), and ‘Professional, Scientific and Technical’ (19%) sectors. These sectors each respectively account for 25%, 23%, and 22% of the total amount of relief claimed, or 70% in total. The spread of claimants by sector is in line with prior tax years and emphasises the outsized contribution that companies in the IT, Manufacturing, and Scientific sectors make to British innovation and economic competitiveness.

Outside the South of England, the East of England has the third largest amount claimed, representing 12% of the total, but despite this, is only the fourth largest region based on the number of claims. Conversely, the Northwest has the third largest number of claims but is the fourth largest region in terms of the amount of relief received.
Although the stratification of the figures by region illustrates a marked bias towards Southern England, it should nonetheless be emphasised that the registered address of a company says little about where their R&D activities are carried out, geographically speaking. It might be the case, for instance, that a company registered in London carries out their R&D activities in a site located in Scotland; a scenario not uncommon in the oil & gas industry.

The UK’s R&D tax landscape is undergoing significant change as highlighted by the Spring Statement and Autumn Budget in 2022. The updated regime intends to refocus the relief to favour claimants who undertake their R&D within the UK (through the exclusion of overseas Externally Provided Workers). The government has also announced plans to expand the scope of qualifying costs to include cloud computing and expenditure incurred through activities involving pure mathematics that relate to eligible R&D.

If you are interested in finding out whether you are undertaking qualifying R&D activities, and how this might allow you to make a claim under one of the UK’s R&D regimes, please reach out to the Deloitte Gi3 team.

Projected figures for the tax year 2020/21 also predict a continuation of this year-on-year growth. As per the data available, HMRC forecast that the aggregate number of companies claiming UK patent box will reach 1,535, albeit that the total relief claimed will reduce marginally to £1,205mn, an increase and decrease of c.10% and c.1.2% respectively. See below table:

Projected figures for the 2020 to 2021 period exhibit similar patterns and distribution. It is projected that large companies will receive 94% of the aggregate tax relief granted during the period, totalling approximately £1131mn, while making up 24%, or 375, of claimants. Medium-sized enterprises made up 25% of claimants, or 390 companies, and received 4% of the total relief claimed—a projection that is largely analogous to the prior period. Small and Micro enterprises again comprised the remaining 49% of claimants and 2% of tax relief. Updated statistics for 2019/20 show that a large proportion of patent box claims emanate from the manufacturing, wholesale, and/or retail industries. The figures make clear that 32% of tax relief in the tax year 2019/20 was provided to the UK’s manufacturing sector. Further to this, the ‘Professional, Scientific & Technical Sectors’ make up a further 35% of tax relief claimed. In all, these sectors together represent 65% of claimants and receive 67% of the available tax relief. This makes sense on the basis that a large portion of UK R&D activities can be found in the manufacturing and technical sectors. 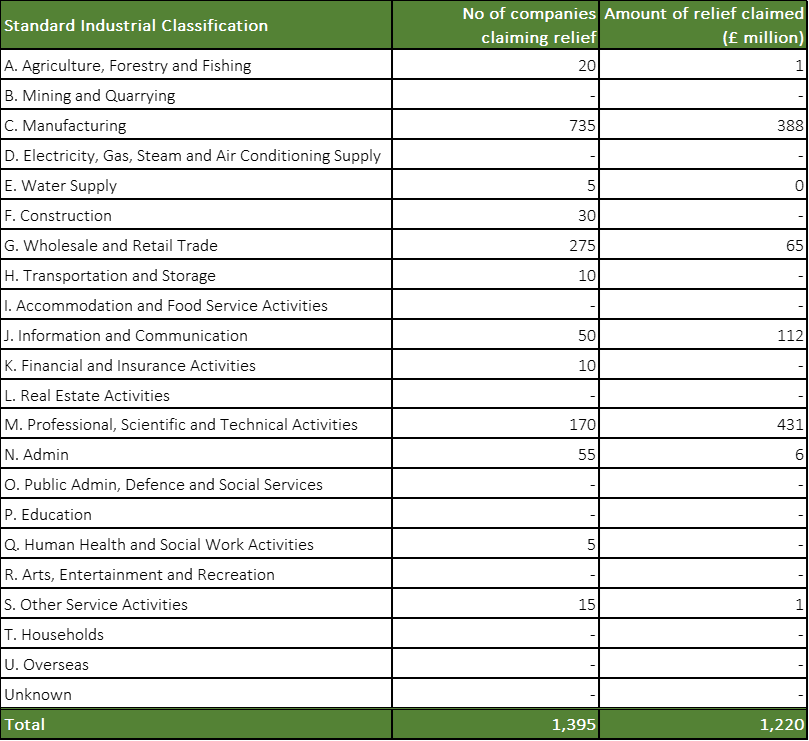 Akin to prior periods, projected figures for the tax year between 2020 and 2021 show that an estimated 42% of total relief claimed is attributable to the manufacturing industry, and a further 23% from the ‘Professional, Scientific and Technical’ sectors—collectively making up 54% of claimants, a slight decline on the prior tax year. 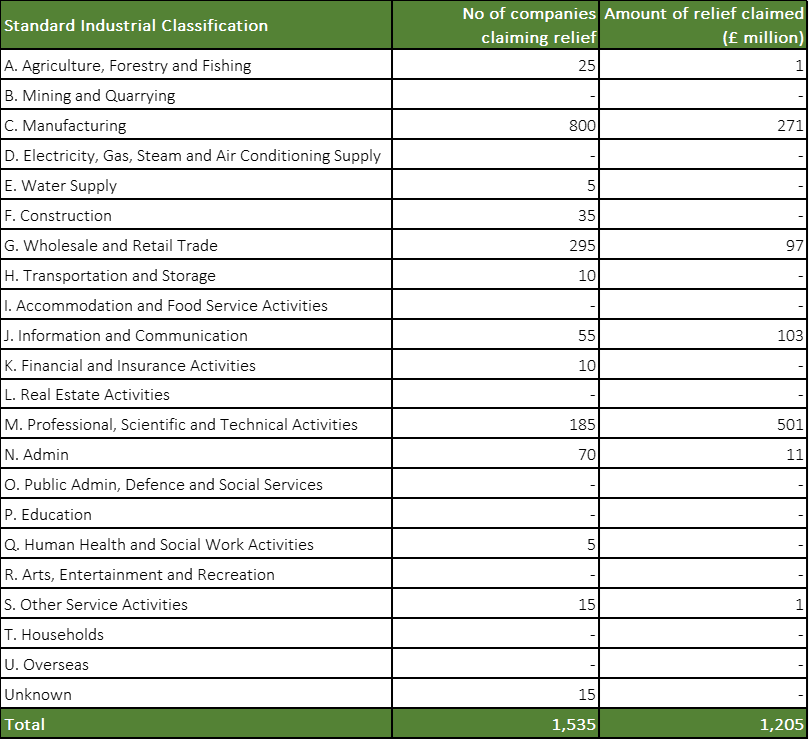 For the tax year 2019 to 2020, London-based companies claimed the largest amount of tax relief, equal to approximately 46% of the total. Provisional statistics for 2020/21 suggests that London-based companies will remain the largest recipients of patent box associated tax relief—roughly 50% in all. Despite the clear bias towards London headquartered companies, as with the R&D regime, the location of the actual R&D or IP generating activities might very well be located elsewhere in the UK. A biotech company registered in London might, for instance, have regional labs that carry out the vast majority of its R&D work, whilst the London offices function as the administrative and operational node of the company’s national operations.

In light of recent announcements made by the UK Government, it is apparent that corporation tax will be increasing to 25% in 2023. The incentive for companies to use the UK Patent Box is therefore going to grow significantly. Companies wanting to utilize UK Patent Box must first obtain granted and qualifying patents.

If you are interested in finding out whether you potentially have patentable technology, and how to apply for a patents that are eligible for UK Patent Box tax relief, please do reach out to the Deloitte Gi3 team.

Sarah is a Partner in our Gi³ practice and has over 20 years’ experience working in international and UK corporate tax. Sarah specialises in R&D and Patent Box tax incentives and leads the firm’s Pate... More

Sarah is a Director in our Gi³ practice based in Leeds. She has more than 15 years’ experience advising clients on corporate tax matters, including tax reliefs for innovation. Her experience has given... More