With a higher-than-expected GDP growth rate reported in 2017, the outlook for Singapore looks positive. Growth across sectors is likely to even out in 2018, indicating a well-rounded recovery. However, short- and long-term risks persist, which could derail growth projections.

Real GDP increased 3.6 percent in Singapore in 2017, higher than what most analysts projected.1 Growth was driven by external demand for electronics and advanced machinery, which benefited Singapore’s manufacturing sector. However, the much larger services-producing industries of the economy grew at a slower pace. In 2018, the economy is expected to experience less uneven growth across sectors. In this article, we look at the drivers of growth in 2017 and the likely path to more evenly distributed growth in 2018. We also look at possible downside risks to growth as well as Singapore’s likely monetary and fiscal policy path in the near term.

The goods-producing industries (manufacturing, construction, utilities, agriculture, fishing quarrying), which collectively account for 25 percent of GDP, grew 5.7 percent in 2017. However, growth was uneven across the sectors—a sharp decline in the construction sector was more than compensated for by strong growth in manufacturing (see figure 1). Manufacturing grew 10 percent during the year, the fastest rate of growth in the last seven years. Within manufacturing, the electronics cluster grew 33.5 percent and the precision engineering cluster grew 17.8 percent. 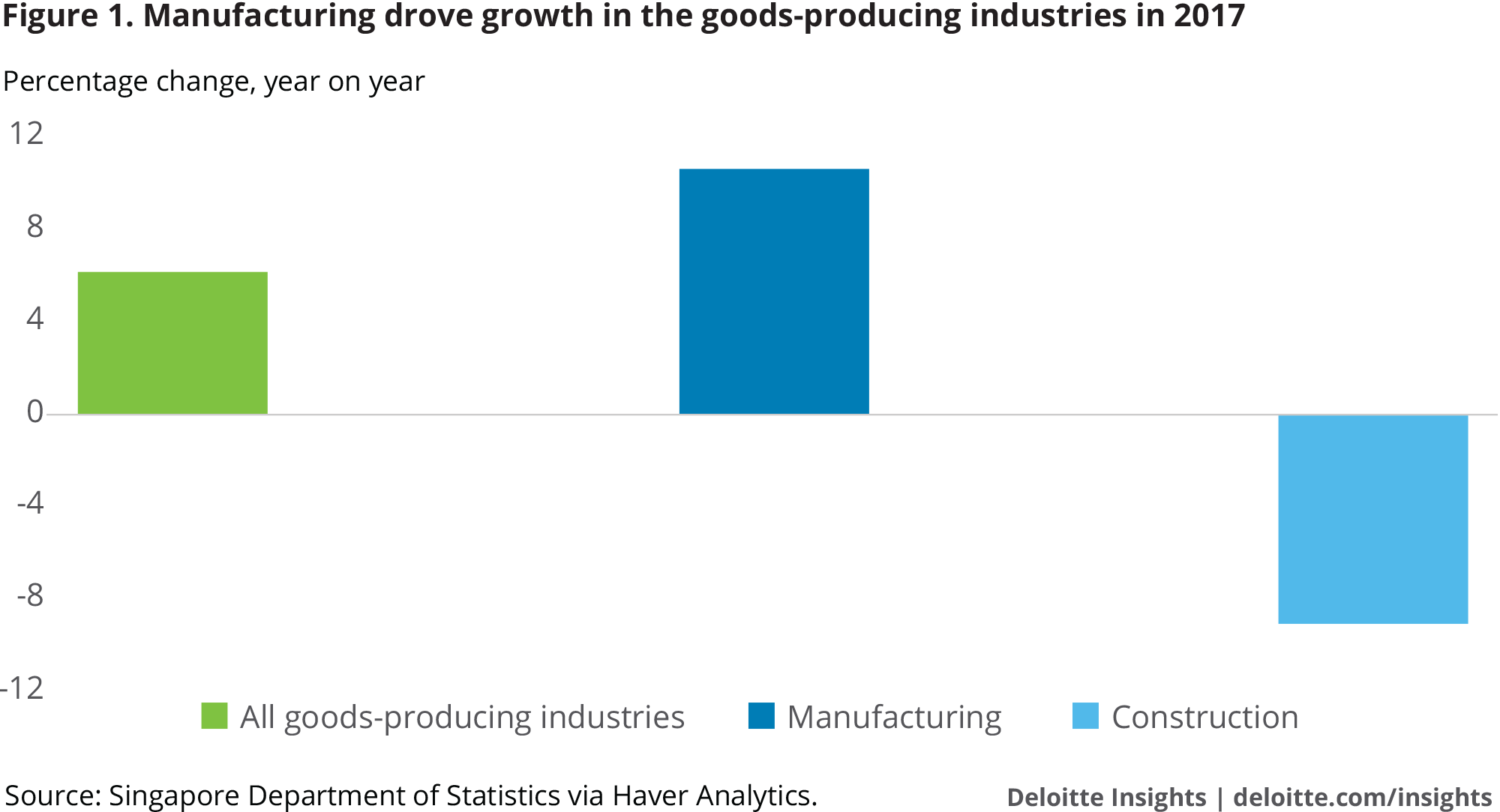 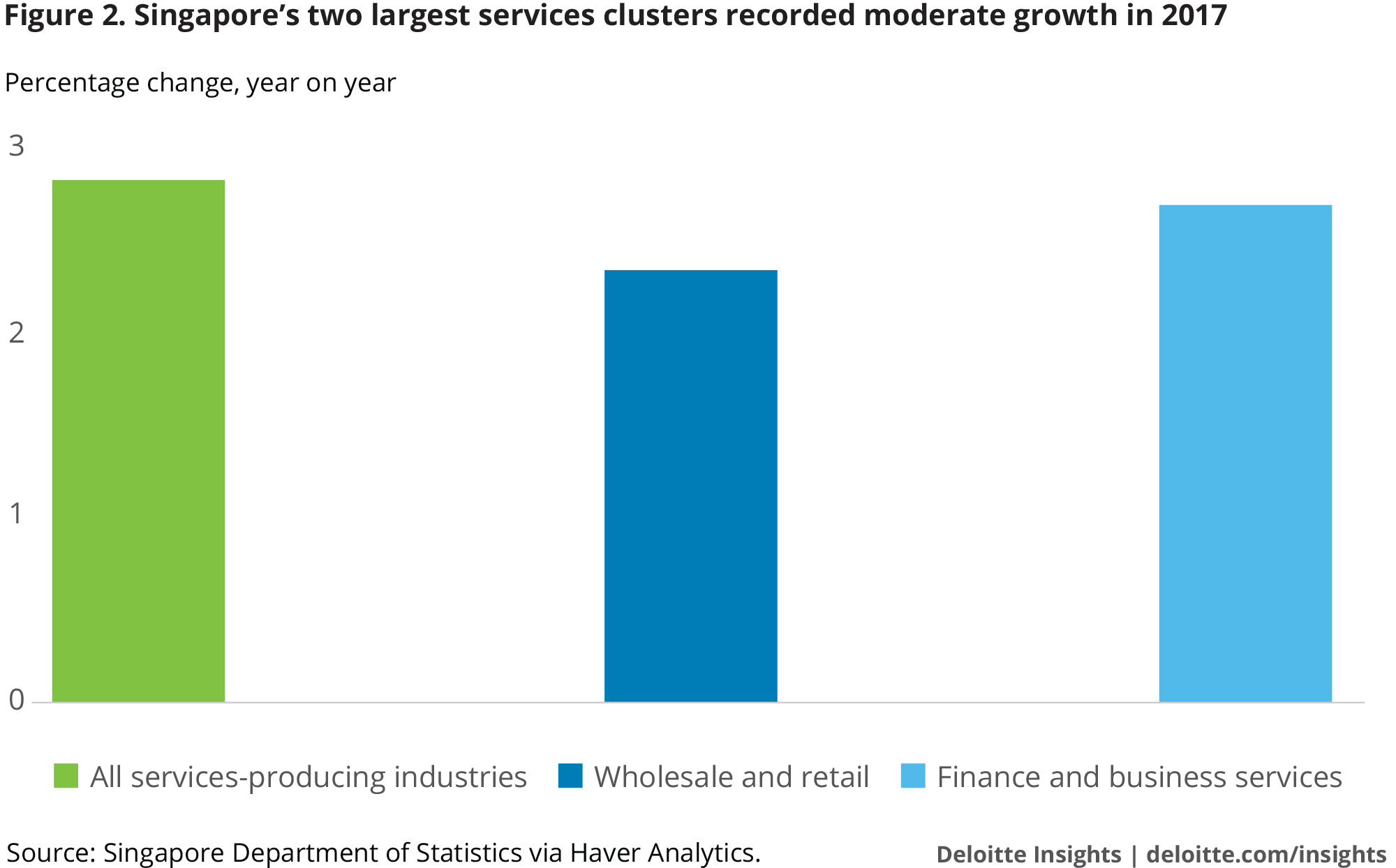 Apart from manufacturing, the other major goods-producing industry is construction. Construction has slowed since 2015 and shrank 8.4 percent in 2017. Singapore’s Building and Construction Authority projects a recovery of the construction sector in 2018.7 Demand is likely to be driven by the public sector, but private demand is also projected to improve. However, if there are further delays in large-scale public sector infrastructure projects such as the North-South corridor and if private sector demand remains subdued, the construction sector might continue to be a drag on overall growth in 2018. In addition to infrastructure project delays and weak private demand, another factor could likely weigh on the supply side of the sector: Singapore’s curb on low-skilled foreign workers may create labor shortages in the sector. Any recovery in construction in 2018 is likely to be modest.

If manufacturing growth slows and the recovery in the construction sector is modest at best, Singapore’s services-producing industries will likely need to continue growing to keep overall GDP growth healthy in 2018. Strong global demand and a recovery in domestic business and consumer sentiment point to the likelihood of broad-based services growth in 2018. External-facing services sectors, such as finance and business services and transport and storage services, are likely to be direct beneficiaries if global trade momentum continues. Domestically oriented services such as retail are likely to benefit from an ongoing improvement in the labor market—retrenchments (employee redundancies) fell in 2017 and the real median monthly income for full-time employees increased 5.3 percent (as of June 2017).8 The information and communications sector is also likely to benefit from an improved labor market and growth in overall operating surplus in 2017. GDP growth in 2018 is, therefore, likely to be more evenly spread across different sectors compared to 2017.

Downside risks could be a game changer

The near-term outlook for Singapore, though firm, comes with downside risks that could derail growth projections. The greatest risk to a small open economy such as Singapore is the possibility of increased global protectionism. Although the World Trade Organization projects that global trade momentum will continue in 2018, trade friction between the United States and China could lead to a spread in protectionist policies.9 In such a scenario, Singapore’s GDP growth is likely to be hit hard.

Another risk to near-term growth is the possibility of a faster-than-expected acceleration in inflation in the United States, which could lead to a quicker rate of increase in the federal funds rate. This could, in turn, lead to higher domestic interest rates in Singapore, which could be burdensome to already indebted households.

A longer-term downside risk to growth prospects is the possibility of labor shortages. As Singapore attempts to climb the value chain, the demand for high-skilled labor is likely to increase. However, with Singapore’s rapidly aging population (see figure 3) and with curbs on the employment of foreign workers in place, companies seeking highly skilled labor might be faced with an uphill task. Labor shortages could lead to bottlenecks and translate into slower growth. 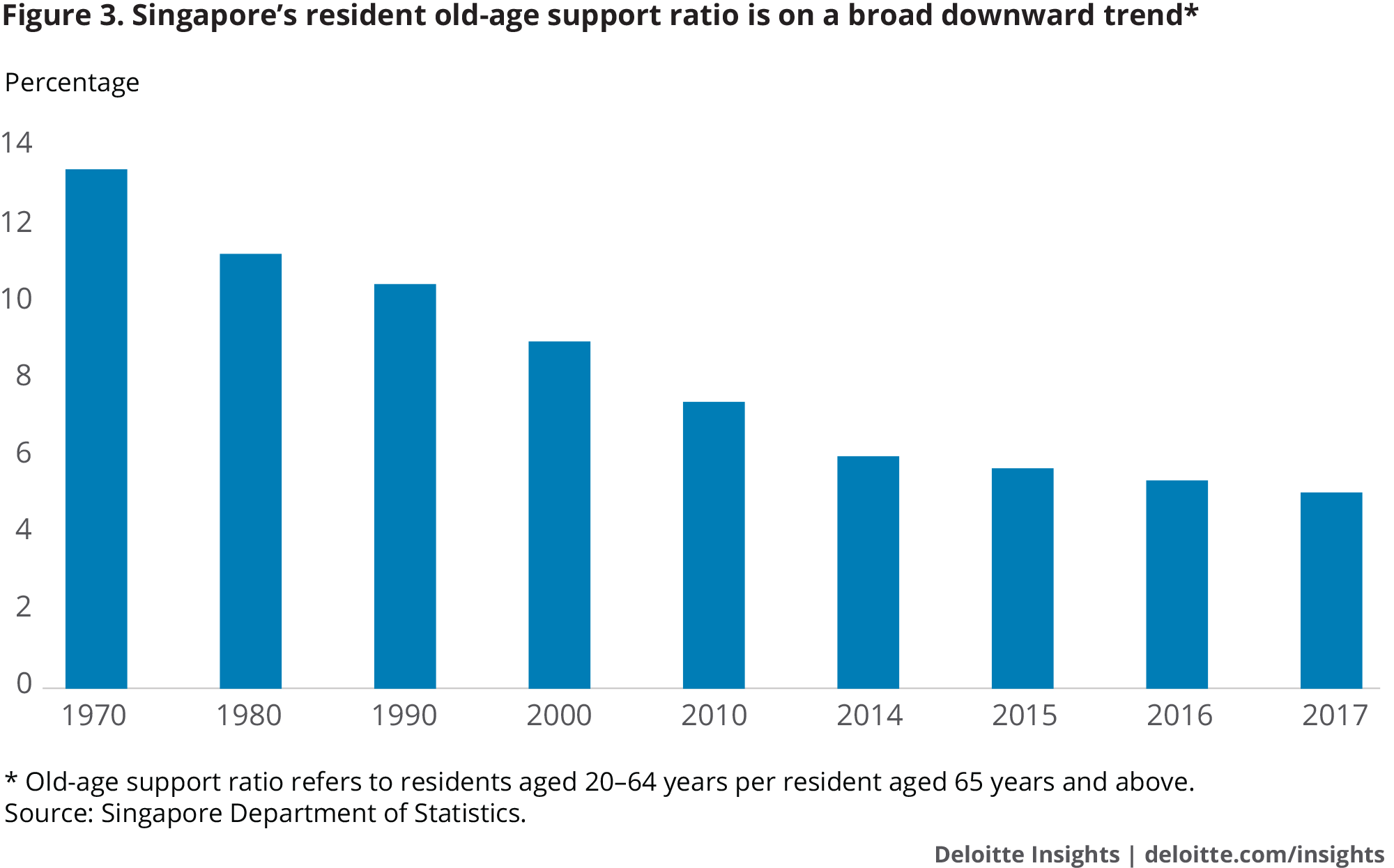 The near-term policy path is likely to support growth

Fiscal policy will likely remain expansionary in the near term. The budget for 2018 made provisions to distribute a larger-than-expected budgetary surplus from the previous year to Singaporeans in the form of a one-off bonus.10 Apart from this, the budget for 2018 continues outlays for the development of workforce skills and domestic infrastructure.11 The budget does, however, indicate that goods and services tax rates will be hiked from 7 percent to 9 percent, effective as early as 2021.12 The impending hike in indirect tax rates might spur consumer spending in the next couple of years.

Given the backdrop of more evenly distributed growth, the downside risks and Singapore’s likely policy path, GDP growth is likely to be slower in 2018 than in 2017. The Ministry of Trade and Industry projects GDP growth in 2018 to be slightly above the middle of the forecast range of 1.5 percent to 3.5 percent.13 Slower but broad-based growth could, however, be indicative of a well-rounded recovery in Singapore’s economy.

Singapore: Strong growth in 2017 is likely to stabilize in 2018 has been saved

Singapore: Strong growth in 2017 is likely to stabilize in 2018 has been removed

An Article Titled Singapore: Strong growth in 2017 is likely to stabilize in 2018 already exists in Saved items