Only 6% of journeys in Brussels are on foot or bike, spend 41 hours per year in congestion has been saved

Only 6% of journeys in Brussels are on foot or bike, spend 41 hours per year in congestion has been removed

An Article Titled Only 6% of journeys in Brussels are on foot or bike, spend 41 hours per year in congestion already exists in Saved items

Only 6% of journeys in Brussels are on foot or bike, spend 41 hours per year in congestion

Deloitte’s Global City Mobility Index reveals that while Brussels has a well-developed public transit network, insuﬃcient coverage in some areas of the city leads to high use of cars, increased traﬃc congestion and reduced air quality. A lack of coordination and shared ticketing between STIB, SNCB, De Lijn and TEC has hindered progress to solve transportation problems and accelerate the adoption of other mobility solutions. Overall, these issues mean citizens walk less than their European counterparts and spend 41 hours per year in traffic.

Cities with high population densities such as London, Singapore, and Berlin scored highest on transportation performance. Walking and cycling are most prevalent in Paris, Berlin, and Amsterdam—all northern European cities. Helsinki is a top performer, too.

Sam Sluismans, Deloitte Belgium Partner, responsible for Innovation services: “Belgium is a small country that facilitates a private car commuting culture. Given the prevalence of company cars, changing public behaviour will be a challenge. In addition, with 19 municipal authorities, Belgium’s complex governmental and institutional framework hinders the development of a coherent strategy. To embrace the rapid changes occurring in the transportation ecosystem and to reach the level of Helsinki, London and Singapore, which are among the world’s best city mobility systems, vision and leadership are needed.”

The key issue that Brussels faces is intensive traffic congestion, particularly during peak hours, both on the ring road and within the city itself. Improving intermodal connectivity between different regions, especially in the city outskirts, and harnessing data and analytics to implement real-time traffic and demand management, could help Brussels raise its rather low “Transit supply” score. Reducing traffic would also help lower the time spent in congestion each year, which currently is 41 hours.

Amsterdam, a global leader in mobility, demonstrates how urban mobility can thrive without heavy reliance on private cars thanks to its effective and integrated transport system. Despite being a major capital city with a sizeable population, there is limited use of private transportation and incentives to use alternatives.

A leader in cycling infrastructure, Amsterdam has the highest modal share for active transportation. Walking and cycling account for 61 percent of journeys, compared to only 6 percent in Brussels. The time spent in congestion each year in Amsterdam is therefore only 26.5 hours, compared to 41 hours in Brussels.

“Integrated and shared mobility” is also an area in which Brussels underperforms, compared to top-performing cities, such as Helsinki. An immediate next step for Brussels to improve in this domain would be to introduce an integrated ticketing and payment system across different mobility players through a MaaS (Mobility as a Service) solution.

The highest customer satisfaction within our sample was in Helsinki, which scored 88 percent customer satisfaction for public transport services in spring 2017, despite being relatively expensive. High security, convenience and ease of use are the main contributing factors for the high score. Another important factor behind these high ease of use and satisfaction scores is the innovative MaaS app. Created by a Helsinki start-up, the app allows citizens to travel on public and private services via a monthly subscription.

Brussels achieves a high rating in terms of “Environmental sustainability” in part due to the fact that it is fairly well developed in terms of the number of bicycle lanes compared to other cities in the Deloitte City Mobility Index, however the highly car-driven mobility landscape results in a low rating for “Air quality”.

Brussels has already taken steps to try to reduce its air pollution by banning old diesel cars from the city centre, within the so-called “low emission zone”.

Like Brussels, Manchester has a high share of private vehicle journeys (58 percent). However, it outperforms in air quality thanks to the Greater Manchester Electrical Vehicle Scheme for promoting electric vehicles in the city, and its reliable and popular bus and tram networks.

“We are encouraged to see increasing alignment among stakeholders in Brussels on the need for change in mobility, with a number of forward-thinking initiatives across public- and private-sector players across public- and private-sector players,” Sluismans continued. “There is also an existing multimodal network with all forms of public transport -tram, bus, metro, train and bicycle- represented. The growth of shared mobility players seeking to address some of the key mobility challenges is another strength Brussels can build on to further develop its mobility landscape.”

About the Deloitte City Mobility Index

The Deloitte City Mobility Index is a comprehensive review that assesses major cities on key aspects of mobility and readiness for future mobility solutions (the Future of Mobility). It covers three thematic areas – performance and resilience, vision and leadership, service and inclusion – to gauge whether the transport networks move citizens efficiently, inclusively, sustainably, and in an integrated way, and how forward-thinking and effective the various government bodies are in delivering quality mobility.

Drawing on publicly available data, client conversations, and Deloitte’s own analysis, it covers over 60 individual parameters. A total of 18 cities from across the globe have been released in the first wave, selected to represent a variety of sizes by population and area, geography and levels of economic development. An analysis of more than 20 cities is slated to follow and results will be updated annually thereafter. 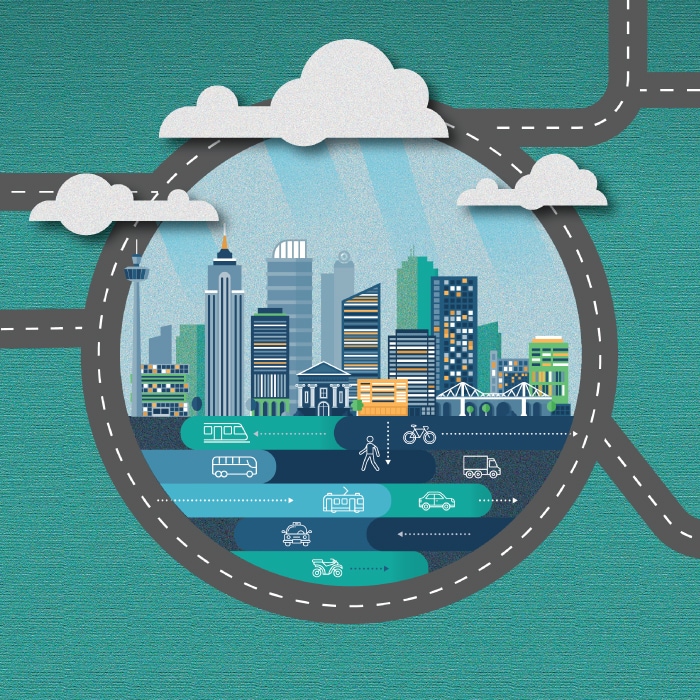 Sam is the Managing Partner for our Business Unit Accountancy and a member of Deloitte Belgium’s Executive Committee. Sam has led an established career within Deloitte, with years of experience combin... More

Only 5% walk or bike, spend 41 hours/year in congestion