A new digital consumer emerges from the COVID-19 crisis

Launched today, Deloitte’s Digital Consumer Trends 2020, previously known as the Global Mobile Consumer Survey, reveals that a new digital consumer has emerged from the COVID-19 crisis. This new digital consumer prefers to use his/her smartphone despite being confined at home with several other devices, such as laptop or TV. This is the case for all generations, including 65+. Working and shopping from home has become the norm, and the new digital consumer is becoming more aware of the types of online data being shared and used. His/her attitude toward the prospect of 5G is also evolving.

Deloitte’s Digital Consumer Trends is a multi-country survey of digital services users around the world. The 2020 study comprises approximately 35,150 respondents across 22 countries and six continents, including 2,000 nationally representative Belgian consumers aged 18 to 75.

Vincent Fosty, Deloitte Belgium’s Technology, Media and Telecommunications Industry Leader: “We see that the COVID-19 crisis, and the lockdown measures, have revealed a new digital consumer. Habits as well as perceptions have changed. While we don’t know if the trends that have emerged or been accelerated by the crisis will last, they are likely to influence consumer behaviours for years to come.”

The smartphone was already the preferred device for many media and entertainment activities prior to the lockdown. The 2020 data shows that the 65+ generation now also prefers their phone over their laptop for checking bank balances and social networks, which was already the case for younger generations.

Fifty-two percent of Belgian respondents believe that they used their smartphone a lot more during the lockdown. About half said that their smartphone helped them feel less isolated as it enabled them stay in touch with friends and family during that period. Although new consumption habits may decline post-lockdown, they will remain more important than prior to the lockdown.

Seventy-three percent of respondents did not purchase any tech devices (Smartphone, Game Console, Smart Watch, etc.) as a result of spending more time at home because of the coronavirus pandemic. This may reflect the sanitary measures, with closure of physical shops as well as shopping restrictions. Some households may also have dusted off formerly unused devices.

Belgians work and shop from home

Other activities that saw an increase as a result of staying at home include online shopping for items other than groceries (for 23 percent), and offline entertainment activities like reading (for 22 percent) and spending quality time with family/friends (for 20 percent).

“The type of data influences people’s willingness to share. We found that almost 6 in 10 people would like to restrict access to some of their data, but they do not know how to. On top of that, 80 percent of respondents accept terms & conditions without reading them. This is interesting to see, as less than 1 in 4 people thinks that the benefits from interacting with companies online outweigh data privacy concerns,” said Fosty

Restricting app access to photos or contacts and deleting browser history are the top actions taken due to worries around data usage. Six percent of users have stopped using a social media platform permanently and 5 percent temporarily as a result of privacy concerns.

Fosty: “A third of the respondents supports the government's use of their devices for contact tracing and 3 in 5 are in favour of thermal camera usage in well-populated areas. There is however a generational divide: Older age groups tend to be more supportive of the government’s use of technology to mitigate the impact of COVID-19.”

Third of Belgians believe there are health risks with 5G

Tim Paridaens, Deloitte’s Global Chief IoT architect: “Across all age groups, one third believes that there are health issues with 5G, while 2 out of 3 people in Belgium report limited understanding of 5G and its possibilities. There is a clear readiness divide compared to US respondents which Belgium should address to keep up with the speed of innovation in both business as consumer applications.” 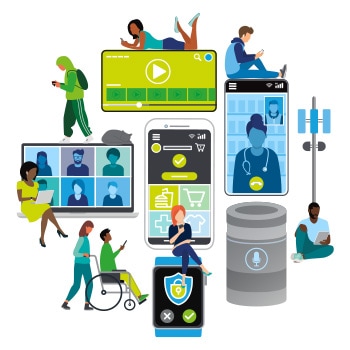 Deloitte’s Digital Consumer Trends is a multi-country survey of digital services users around the world. The 2020 study comprises approximately 35,150 respondents across 22 countries and six continents, including 2,000 nationally representative Belgian consumers aged 18 to 75.

Read all of the results of the Digital Consumer Trends at www.deloitte.com/be/digital-consumer