Workplace of the future: 28% of Swiss workforce work from home, 25% as freelancers – and the trend is on the rise

According to a new study by Deloitte, one in four people in Switzerland currently works as a freelancer. Of the remaining 75%, one third would like to do so in the next year. The rise of the sharing economy – which incites people to offer and provide services via online platforms – is the main driver of the freelancing trend. At the same time, knowledge-intensive careers and mobile working are becoming increasingly important. 28% of the Swiss already work at least half a day per week from home. And this number is likely to increase: Half of all employees have the potential to perform their jobs on a mobile basis. Many companies have recognized this trend and promote various forms of workplace models, from working from home to the new trend of coworking spaces.

Freelancing is on this rise: According to a representative survey of 1,000 Swiss residents of working age conducted by Deloitte, 25% of Swiss citizens currently work as freelancers. A third of them on a full-time basis, the other two thirds part-time. Nowadays, thanks to the up-and-coming sharing economy, all types of services are offered to companies or individuals via online platforms, at any time and across the globe. Freelancing is currently predominant in knowledge-intensive activities such as consultancy, IT, design and editorial work.

Although one in four Swiss citizens is already working as a freelancer, the number will continue to rise in the coming years. Almost a third of non-freelancers are planning to take on additional or project-based work in the next year, on a full-time or part-time basis. Additionally, 45% of freelancers think that demand for their work will increase. 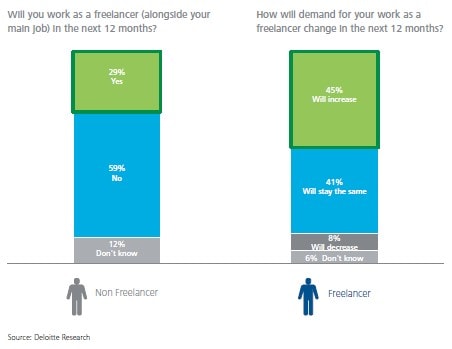 Figure 1 - The future of freelancing in Switzerland

The workforce of the future is flexible

The workforce is not only becoming more independent, it’s also becoming more mobile. The increase in service and knowledge-based jobs, together with advancing digitisation and the growth of the sharing economy, is leading to a rising number of people who are able to work independently of time and place.

“The daily trek to the office and fixed workplaces are becoming less common,” said Michael Grampp, Chief Economist at Deloitte in Switzerland. “According to our study, 28% of the Swiss workforce is currently working from home on at least one half-day per week. We will see this figure further grow in the coming years. In total, about half of the 4.9 million strong workforce in Switzerland could be working on a mobile basis or from home. And this is what employees increasingly are asking for.” 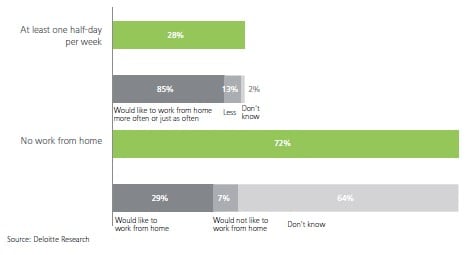 Coworking as a an alternative to working from home

The sharing economy has also shaped another new workplace model: ‘Coworking spaces’ or ‘office communities’ provide offices and meeting rooms on an hourly basis – and are thus an up-and-coming alternative to the conventional office. Online platforms bring together people who are seeking to rent and lease office space. As freelancers are driving the demand for flexible office space, this new trend does not come as a surprise.

The flexible rental of workplaces is becoming more common in Switzerland, although it is still at a relatively low level. In 2014, there were 30 coworking spaces; now there are 50 which together offer just over 1,000 workplaces. A survey of coworking spaces, carried out by Deloitte in collaboration with the association Coworking Switzerland, found that among the 38 that took part, the demand for flexible workplaces had significantly increased over the past year. Demand had increased for 64% of them and only decreased for 6%. Almost half are therefore planning to expand their capacity in the next two years.

Freelancers are the number one customers of coworking space providers (79%). Entrepreneurial businesses are also major users (68%). Company employees are customers of about one in four providers. This shows that there are Swiss companies, both SMEs and larger corporations, whose employees are already making use of the new coworking model.

Where do Swiss companies stand?

Almost every company has the potential to allow employees to work on a mobile basis. Many companies in Switzerland are actively promoting these new workplace models. However, the implementation of mobile workstyle methods differs for each company. Most companies promote working from home, and some endorse their employees working in coworking spaces or even rent their office space to external users. This trend should strengthen in the future, with more large corporations offering flexible workplaces to start-up companies, freelancers and employees of other companies.

Karl Frank Meinzer, Head of Real Estate Services at Deloitte in Switzerland, explained: “Flexible workplace models not only offer advantages to employees, but also to employers. On the one hand, the benefits can include a more efficient use of office space and hence a reduction in costs. In the current Swiss office property market, this is of particular relevance for areas of high population density, which are characterized by very high office space costs in international comparison. On the other hand, companies can increase their appeal as an employer and the satisfaction of their employees. Flexible workplace models can also have a positive impact on the productivity of the workforce.

He added: “By offering flexible workspace to external users, companies can expand their external networks and hence profit from the knowledge of others. Such models are not only sought after as a new form of the networking economy, but also promote the image of being an innovative and collaborative company. Moreover, companies can generate income from unused work space. This is a significant aspect for companies to consider, since the demand from freelancers for flexible office space is expected to grow significantly.”

The workplace of the future

The study The workplace of the future: How digital technology and the sharing economy are changing the Swiss workforce investigates trends in the composition of the Swiss workforce and the effect they will have on the workplace of the future. Face-to-face interviews were conducted between December 2015 and January 2016 with executives from the following companies and associations: AXA Winterthur, Basler Versicherungen, Coworking Switzerland, Die Schweizerische Post, economiesuisse, Microsoft Schweiz, PopupOffice, SBB, Swiss Re, Swisscom and Zürcher Kantonalbank. In collaboration with the research institute Research Now, a representative survey of 1,000 Swiss residents was carried out, representative according to age, gender and region. In addition, in collaboration with Coworking Switzerland, a survey was conducted among 38 Swiss coworking spaces.