Consumers in emerging markets such as China, Russia and United Arab Emirates continue to drive luxury market growth with 70% of consumers claiming to have increased their spending in the last 5 years, compared to 53% in the more mature markets (EU, US and Japan). Switzerland remains one of the strongest luxury goods markets with two companies in the Top 10, excelling especially in luxury watch-making, according to the fourth annual Global Powers of Luxury Goods report issued by Deloitte.

The report examines and lists the 100 largest luxury goods companies globally, based on publicly available data for consolidated sales of luxury goods in FY2015 (which we define as financial years ending within the 12 months to 30 June 2016). It also discusses the key trends shaping the luxury market and provides a global economic outlook.

The world’s 100 largest luxury goods companies generated sales of US$212 billion in FY2015, which represents a currency-adjusted growth of 6.8%1. The average luxury goods annual sales for a Top 100 company is now US$2.1 billion.

“The essence of luxury is changing from an emphasis on the physical to a focus on the experiential and how luxury makes you feel”, said Karine Szegedi, Head of Fashion & Luxury at Deloitte in Switzerland. “However, premium quality remains a ‘must have’ and consumers retain a keen eye for craftsmanship and hand-made products”.

Swiss luxury market clearly dominated by three players
There were ten Swiss companies in the top 100 this year. Switzerland's luxury good sales are dominated by Richemont, Swatch, and Rolex, which together account for 87% of FY2015 luxury goods sales for the ten Swiss companies in the Top 100. Richemont retained its #2 position in the Top 100, Swatch Group was overtaken by Kering and now ranks #6, while Rolex retained its #11 position.

Just as Italy is the global leader in fashion, Switzerland is second to none in luxury watch-making: Nine out of the ten Swiss companies in the Top 100 are watchmakers. The strength of their brands can be seen in their presence in jewellers and other distribution outlets for luxury watches around the world, as well as in their own growing store networks. Multiple luxury goods company Richemont for example obtains nearly 30% of its sales from its portfolio of luxury watch brands such as Piaget.

“This ongoing sales growth is a remarkable achievement, especially in the context of the 15% rise in value of the Swiss franc since January 2015, making their brands more expensive for customers in their important export markets. This resilience of Swiss luxury goods companies comes down to their positioning as all-rounders in contemporary fine watchmaking and their strategy of dividing sales evenly among geographic regions,” said Karine Szegedi. “The barriers to entry created by the brand heritage and the technical and design excellence of the Swiss luxury watchmakers are proving very hard to overcome.” 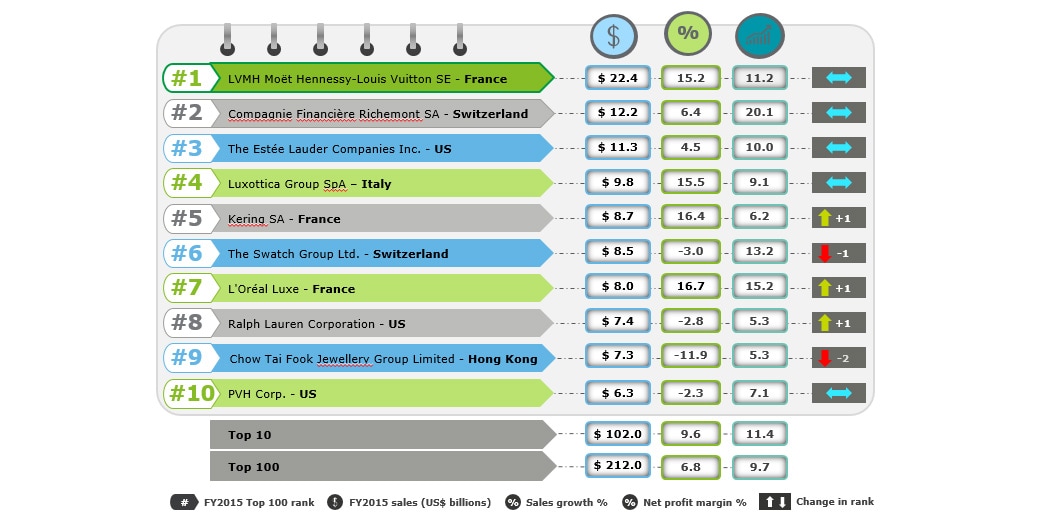 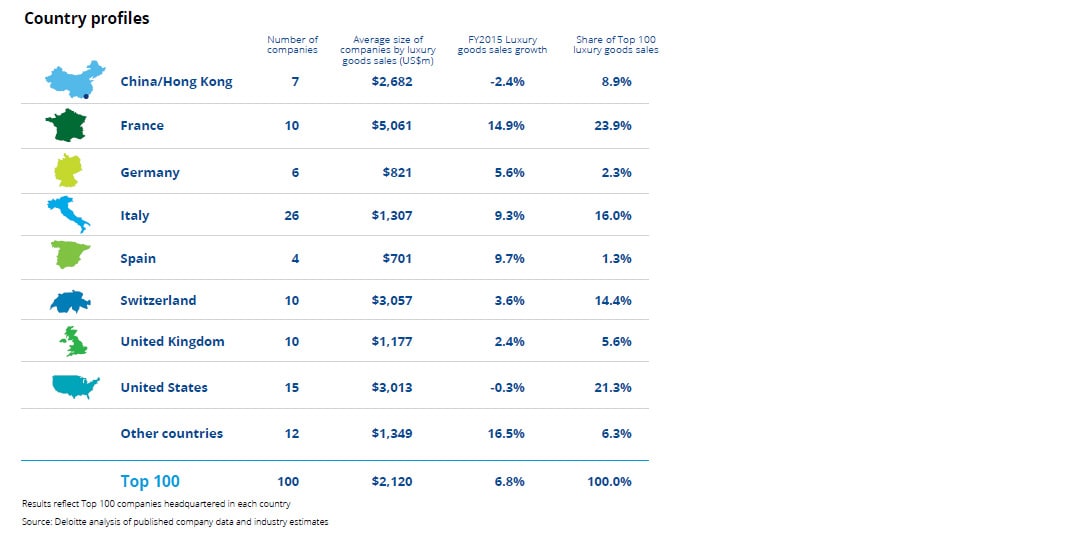 1The 6.8% year-on-year growth is based on currency-adjusted composite retail revenue for the FY2015 group of Top 100 companies. This growth rate was adjusted for fluctuations in currency exchange rates from FY2014 to FY2015, thus representing true growth.

2Multiple luxury goods companies are those with substantial sales in more than one product sector: apparel and footwear, bags and accessories, cosmetics and fragrances, and jewellery and watches.

About the Global Powers of Luxury Goods report
The Global Powers of Luxury Goods report identifies the world’s top 100 largest luxury goods companies based on publicly available data and analyzes them from multiple perspectives. It also examines industry trends and global economic conditions. For the “New luxury consumer” section of the report, Deloitte surveyed over 1,300 consumers in 11 countries (China, France, Germany, Italy, Japan, Spain, Switzerland, UAE, UK and US) to explore their attitudes to luxury goods and their purchase behaviour.

Deloitte in Switzerland
Deloitte is a leading accounting and consulting company in Switzerland and provides industry-specific services in the areas of Audit & Risk Advisory, Consulting, Financial Advisory and Tax & Legal. With more than 1,700 employees at six locations in Basel, Berne, Geneva, Lausanne, Lugano and Zurich (headquarters), Deloitte serves companies and institutions of all legal forms and sizes in all industry sectors. Deloitte AG is a subsidiary of Deloitte LLP, the UK member firm of Deloitte Touche Tohmatsu Limited (DTTL). DTTL member firms comprise of over 245,000 employees in more than 150 countries.

Note to editors
In this news release, Deloitte refers to one or more of Deloitte Touche Tohmatsu Limited (“DTTL”), a UK private company limited by guarantee, whose member firms are legally separate and independent entities. Please see www.deloitte.com/ch/about for a detailed description of the legal structure of DTTL and its member firms.
Deloitte AG is a subsidiary of Deloitte LLP, the United Kingdom member firm of DTTL. Deloitte AG is an audit firm recognised and supervised by the Federal Audit Oversight Authority (FAOA) and the Swiss Financial Market Supervisory Authority (FINMA).