The social enterprise in a world disrupted: Leading the shift from survive to thrive

In today’s world of perpetual disruption, it’s time for organisations to shift from a survive mindset to a thrive mindset. Making this shift depends on an organisation’s becoming—and remaining—distinctly human at its core, because today’s environment of extreme dynamism calls for a degree of courage, judgment, and flexibility that only humans can bring.

COVID-19 proved that people and organisations are capable of tremendous growth under the pressure of a crisis. The challenge for many will be to sustain that momentum to discover new ways to thrive in the long term, even as disruption constantly resets the path forward.

The social enterprise in a world disrupted

Making the shift from “survive to thrive” depends on an organisation becoming distinctly human at its core—a different way of being that approaches every question, every issue, and every decision from a human angle first.

In 2020, COVID-19 forced organisations around the world to enact radically new ways of working and operating amid the pandemic’s human and economic impacts. Organisations had to respond to a sudden, unforeseen crisis whose rapidly changing nature confounded efforts to predict and plan for events. The pandemic brought into sharp relief the pitfalls of strategies that envision moving from point A to point B on a static path, and that assume that one has years, not months or weeks, in which to rethink outdated views and establish a new set of truths. As we all learned the hard way, in an environment that can shift from moment to moment, the paths and time frames to achieving one’s goals must shift as well.

Having a plan to deal with the unexpected, as important as it is, isn’t all organisations need in such an environment. Even more necessary is to make a fundamental mindset shift: from a focus on surviving to the pursuit of thriving.

In a world of perpetual disruption, a focus on surviving restricts one’s aspirations to accepting each new reality and working within it to accomplish what an organisation has always done. A survival mindset views disruptions as point-in-time crises to be addressed with the expectation that the organisation will revert to “business as usual” once the crises are over. Organisations with a survival mindset aim to deal with the reality that the world imposes; it’s about doing what’s necessary to succeed today.

The pursuit of thriving, in contrast, orients organizations toward welcoming each new reality and using it to reimagine norms and assumptions in ways that were not possible before. A thrive mindset recognises that disruption is continuous rather than episodic, and embraces disruption as a catalyst to drive the organisation forward. Organisations with a thrive mindset aim to create new realities that they choose for themselves; it’s about doing what’s possible, not just to succeed today, but also to dominate tomorrow.

It’s our view that the shift from survive to thrive depends on an organisation becoming—and remaining—distinctly human at its core. This is not just a different way of thinking and acting. It’s a different way of being, one that approaches every question, every issue, and every decision from a human angle first. And it’s not just a good idea, but a mandate for growth. Today’s environment of extreme dynamism calls for a degree of courage, judgment, and flexibility that only humans and teams led by humans can bring. A predictable world can be effectively dealt with by algorithms and equations. A messy world cannot, even in an age of increasingly intelligent machines.

Being distinctly human at the core is the essence of what it means to be a social enterprise. To combine revenue growth and profit-making with respect and support for its environment and stakeholder network, an organisation needs to ground itself in a set of human principles: purpose and meaning, ethics and fairness, growth and passion, collaboration and relationships, and transparency and openness. The human focus these principles bring to an organisation is what puts the social enterprise in a position to thrive—to continually reinvent itself on the back of perpetual disruption.

Preparedness stems from a “thrive” mindset

In the 2021 Deloitte Global Human Capital Trends report, we set out to understand what characteristics can support organisations in the shift from survive to thrive. We started our exploration by asking a paradoxical question: How can organisations position themselves to thrive when they are focused on making the changes necessary to survive?

To find out, we surveyed 6,000 professionals across every industry, sector, and region of the globe, with 99 countries participating. 3,630 of this year’s respondents were senior executives. And, for the first time in the survey’s 11 years, business executives outnumbered HR executives, underscoring the importance they placed on human capital issues in the COVID-19 crisis. We asked them about their experiences since the pandemic began, seeking to understand how the crisis affected the way they viewed organisational preparedness, the challenges and opportunities they expected to face in future disruptions, and their plans for approaching work transformation strategies moving forward.

From this research, we learned that the organisations that were best prepared for the COVID-19 crisis were already adopting a “thrive” mindset of using disruption as an opportunity to propel the organisation forward. The 15% of executives who said that their organisation was “very prepared” for the pandemic were 2.2 times more likely to pivot investments for changing business demands. The “very prepared” group was also twice as likely to use technology to transform work. And most importantly, those who were “very prepared” were twice as likely to recognise the importance of organising work to facilitate rapid decision-making and nearly three times more ready to leverage worker adaptability and mobility to navigate future disruptions.

While it may not be obvious, these last findings highlight that organisational preparedness hinges on the ability to bring human strengths such as decision-making and adaptability to the fore, not just during a point-in-time crisis, but continually. It means perpetually cultivating resilience, courage, judgment, and flexibility in order to navigate a turbulent reality. And it means taking the creativity unleashed by the need to survive a crisis—the creativity that is a hallmark of being human—and using it to reinvent the organisation and its future. COVID-19 proved that people and organisations are capable of tremendous growth under the pressure of a crisis. The challenge for many will be to sustain that momentum to discover new ways to thrive in the long term, even as disruption constantly resets the path forward.

Elevating the “human” in human capital

In contrast to the idea that disruption can be a catalyst for reinvention, many human capital topics, and particularly those we’re exploring in more depth in this report, have traditionally been approached through discrete programs and initiatives. As organisations make the shift from survive to thrive, these solutions need to become dynamic so that they can better support the human strengths that enable the broader organisation to flourish. In the following chapters, we dive deeper into five topics we wrote about in our 2020 Deloitte Global Human Capital Trends report to further explore how organisations can bring out the human strengths that make organisational thriving possible:

Our May 2020 special report challenged organisations to leverage the COVID-19 pandemic as an opportunity to embrace possibility: to explore how they could draw energy from the pandemic’s chaos and disruption and return to work by designing the future of work. Seven months later, that challenge is even more relevant as we learn more about how the focus on the human dimension of work is guiding organisations as they forge a path forward. Organisations that use disruption as an opportunity to embody human qualities will enable them to thrive through disruption. Organisations that do not will quickly fall behind. 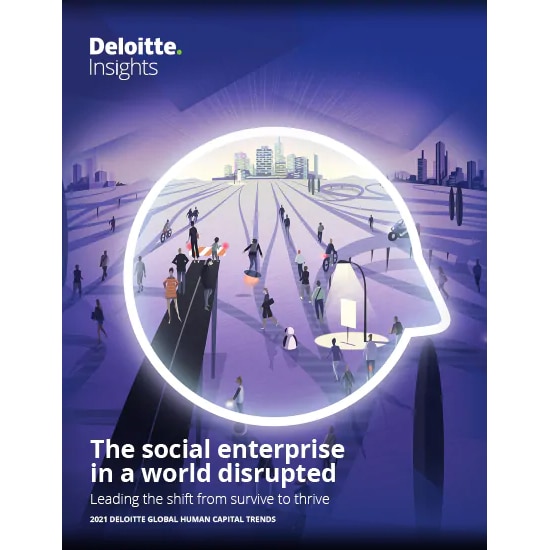 Access the full report of the Global Human Capital Trends 2021

Adrian Mamo leads the Human Capital service line at Deloitte Consulting. He brings with him over 18 years of experience in management, human resources, learning and development, and industrial relatio... More