About Deloitte has been saved

About Deloitte has been removed

An Article Titled About Deloitte already exists in Saved items

Learn about our global organization

Deloitte is a leading global provider of audit and assurance, consulting, financial advisory, risk advisory, tax & legal, and related services. With more than 150 years of hard work and commitment to making a real difference, our organization has grown in scale and diversity—approximately 312,000 people in 150 countries and territories, providing these services—yet our shared culture remains the same. Our organization serves four out of five Fortune Global 500® companies.

Sharon is the Chair of the Deloitte Global Board of Directors. Prior to leading the board, Sharon was the Deputy CEO and Managing Partner Global & Strategy of Deloitte North West Europe (NWE), and a m... More

Pui Yuen started his career as an auditor with Touche Ross & Co, a predecessor firm of Deloitte Singapore, in 1989, and was admitted as an Audit & Assurance Partner in 2000. With more than 29 years of... More

A year of connection, action and impact

Explore the report Download the PDF Watch the video

Our stakeholders’ trust is earned daily by every professional who represents Deloitte and supported by policies and reporting that promote transparency and accountability.

The Deloitte network is committed to driving societal change and promoting environmental sustainability.

Working in innovative ways with government, non-profit organizations, and civil society, we are designing and delivering solutions that contribute to a sustainable and prosperous future for all.

DTTL and its member firms commit to conduct business with high integrity, quality and levels of professional behavior. Our Shared Values and Global Principles of Business Conduct are the foundation of our culture, shaping who we are, what we believe and how we behave.

Learn more about the culture of ethics and integrity at Deloitte.

Explore the Deloitte Newsroom for the latest information.

Every day, our employees work to make an impact that matters. Deloitte offers a dynamic culture of inclusion, collaboration, and high performance. As the undisputed leader in professional services, Deloitte professionals find unrivaled opportunities to succeed and realize their full potential. What impact will you make when you join Deloitte?

Learn more about Life at Deloitte.

About Deloitte in Singapore

The making of Deloitte in Singapore

1970: Goh Tan & Co joined The SGV Group, then the largest professional services firm in Asia based in the Philippines. The firm continued to operate under the name, Goh Tan & Co: the consulting arm was known as the SGV-Goh Tan Pte Ltd

1979: Deloitte Haskins & Sells registered as a practicing firm in Singapore and operated through Goh Tan & Co

2011: Launch of the Deloitte Analytics Institute Asia, the second one to be established by Deloitte, joining the flagship facility in the United States

2012: Integration of the SEA Consulting Practice into the Deloitte Southeast Asia firm

2013: Deloitte’s acquisition of Monitor, one of the world’s leading strategy consulting firms which has operations in Singapore and serves clients across Southeast Asia

In Singapore, services are provided by Deloitte & Touche LLP and its subsidiaries and affiliates. 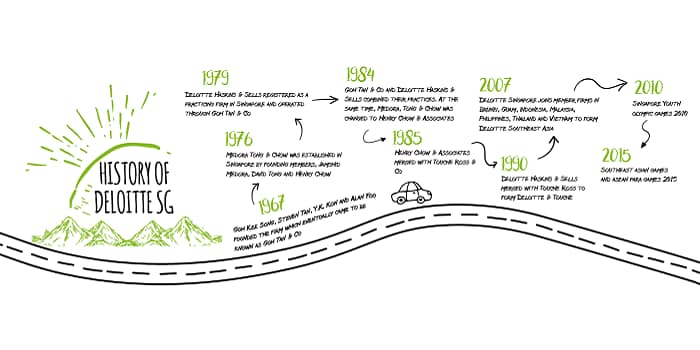