How to overcome the crisis of trust and achieve synergy of business, state, and society?

The Conductors of Changes VI Forum was held in Kyiv

On 24 October 2019, Kyiv hosted the Conductors of Changes VI Forum that brought together more than 500 participants – owners and executives of Ukrainian and international companies, as well as reputable public and state leaders. This year's Forum was organized by Deloitte Ukraine. The Forum included four panel discussions and a workshop, both under a common theme “Trust. Partnership. Responsibility”.

“Lack of trust entails heavy losses – not only in business but also in the family and life in general. This gives rise to secret plans, intrigues, interpersonal conflicts, competition between colleagues, thinking in the “win-lose” paradigm, and creates tension between employees. Low trust slows everything—every decision, every communication, and every relationship. Trust is what the state, business and society badly needs, both in Ukraine and around the world. Understanding the situation is important, but the context of today places even greater priority on finding ways to build trust at all levels,” said Andriy Bulakh, Managing Partner at Deloitte Ukraine.

According to him, Deloitte's global mission is to make an impact that matters. “This is why we invited conductors of changes who transform themselves and their businesses, by acting rather than talking, and who uncover new opportunities for society and the state. What's more, we decided to bring a new facet to the Forum by adding a social component: 20% of the cost of the tickets sold and partners' contributions were donated to social initiatives,” Mr. Bulakh added.

The speakers looked into what happened in Ukraine during the past 14 years through the prism of trust and discussed the process of formation of relations between society, business and the state amid the economic crisis, revolutions and other socio-political turmoil.

Audience participated in the voting and expressed their opinions on trust at different levels. 75% of respondents estimated the level of trust between business and the government as low, and almost 20% believed that there was no trust at all. As related to public trust to business, the indicators proved to be less consistent: 57% of respondents were of the opinion that society was more likely to trust business, and 39% felt a rather low level of trust. Lack of trust was also recorded by indicators of relations between society and the state: 52% of respondents voted for a low level, and 40% stated they did not trust the state and state institutions at all.

Referring to Stephen Covey's book “The Speed of Trust”, Andriy Bulakh focused on four elements of trust: integrity, intentions, abilities, and results. By voting during the discussion, we identified which of these elements we need to seriously focus on to restore a healthy balance of trust at all levels in the immediate future. Most votes (44%) were given to “deliver on promises to win a vote of confidence”. 32% of respondents believe that the key to trust is integrity that includes reputation and alignment of actions with values. 12% and 11% voted for abilities and intentions, respectively.

The second discussion was devoted to the problem of the new social contract as a way to manage relations between the state, business and society. The discussion was attended by Oksana Markarova, Minister of Finance of Ukraine; Alex Lissitsa, CEO of IMC; and Yevhen Bystrytsky, Doctor of Philosophy and professor, Institute of Philosophy of the National Academy of Sciences of Ukraine. The moderator was Valeriy Pekar, lecturer, Kyiv Mohyla Business School.

The discussion raised the issues of how a new social contract should be concluded, who should be its stakeholders, what principles it should be based on and what role institutions should play in developing this agreement.

Yevhen Bystrytsky offered a definition of the civil society and a concept of democracy. The speaker emphasized the importance of communication between the state and civil society represented by small and medium-sized business, for effective implementation of reforms.

Alex Lissitsa believes there is no need to reinvent a new social contract. Instead, we can use the existing models that have yielded results. Oksana Markarova underlined that the Ukrainians have historically established traditions and moral principles that make up the existing social contract. According to the Minister of Finance, Ukraine should primarily concentrate on setting up various scale institutions underpinned by a social contract that immediately arising between them; and the country's development should be driven by the state and business by ensuring welfare that will be of value to society.

Results of the voting held as part of the discussion show that half of the Forum's audience believe that business should, first and foremost, seek to invest in the growth, create employment opportunities, increase exports and develop the country in every possible way. Only 5% of the business representatives voted for high salaries.

Summarizing the discussion, moderator Valeriy Pekar specified three main components that will help to create a new social contract in Ukraine, specifically: establishing institutions, multilateral dialog and involvement of every member of our society in the country's processes.

In between the discussions, there was a workshop on “People and/or technology: new interaction formats” that stirred considerable excitement among participants of the Forum. The event was attended by Kseniia Prozhohina, HR and Communications Director, MHP Agro-industrial Holding, and Ivan Malafeiev, Director of Products at Terrasoft. The workshop was moderated by Volodymyr Yumashev, Partner and TMT Group Leader at Deloitte Ukraine; and Olena Boichenko, Human Capital Advisory Director at Deloitte Ukraine.

The main issues under discussion were global technologization, the state digital agenda and possible interaction between man and technology. Deloitte Ukraine's representatives presented the results of the TMT Predictions 2019 survey and noted that, on the one hand, technologies are a threat to employees' jobs and, on the other hand, they help to increase their involvement and make their work more meaningful.

Ivan Malafeiev told about business process automation and related challenges; he also covered change management as exemplified by Terrasoft. Kseniia Prozhohina shared the specifics of the technology for monitoring employees' emotions that MHP has been using for over a year.

“Trust in business: declared value or value indicator?” was the topic of the third discussion. Among those who imparted their ideas were Andriy Pyshnyi, Chairman of the Board of JSC Oschadbank; Vitaly Butenko, CEO at D.TRADING; Yurii Fyluik, CEO of “Promprylad. Renovatsiia”, founder of Teple Misto platform; Dmytro Bondarenko, General Director of the LIGA Group of Companies, Supervisory Board member at the LIGA Group of Companies, CEO Ligamedia; Andrii Stavnister, owner and CEO of TIS port; and Dina Nemyrovych, Strategic Consulting Leader at Deloitte Ukraine, as panel moderator.

Andriy Pyshnyi shared his experience of restoring trust of Ukrainians to the State Savings Bank and actively promoting the country's most expensive brands. Andrii Stavnister suggested that a distinction should be made between trust to corporate clients and trust to institutions. Yurii Fyluik told the story of the Teple Misto platform, both a non-governmental organization and a business association that has implemented approximately 400 initiatives in different areas. Dmytro Bondarenko disclosed a secret of success of the LIGA family business that has been operating for 28 years and includes 15 companies with nearly 3000 employees. Vitaly Butenko emphasized the importance of building trust as a multi-faceted and complicated process both within the company and in relations with clients, as exemplified by DTEK.

The last discussion centered around leadership through trust. The leading transformational leaders of the country, including Hanna Novosad, Minister of Education and Science of Ukraine; Oleksii Tymofeiev, Co-founder of Trident Acquisitions Corp.; Inga Andreieva, Country Manager of MasterCard in Ukraine; and Sergey Badritdinov, CEO of Intertop Ukraine, shared their insights into this issue. The discussion was moderated by Roman Bondar, Deputy General Manager, Transformation, Ukroboronprom.

In particular, Oleksii Tymofeiev stressed the decisive role of humanitarian management. “Trust must be practiced consciously. It does not spring out of nowhere simply because we are talking about this matter. We must commit to trust as an ideal and take real steps in this direction. Responsibility for achieving trust should be assumed by company leaders,” Mr. Tymofeiev noted.

Inga Andreieva told how MasterCard manages to team 13,000 employees in 210 countries by uniting them with a common goal to create a cashless world. The multicultural approach, flexible working conditions and consideration of psychology of the millennials that prevail among the MasterCard staff are the main principles that the company upholds in its work. Sergey Badritdinov noted that Intertop is making efforts to turn into a technology company that follows the key principles of the Agile Manifesto, and stressed the crucial role of communication at all levels.

Hanna Novosad, Minister of Education and Science of Ukraine, outlined the current state and challenges of the governmental structure and shared her managerial approaches applied in public sector.

Participants of the final discussion of the Forum concluded that diversification in management, clearly defined common goal, openness and multilateral communication determine the team's effectiveness and directly affect the level of trust, both to the company and to the company leader in particular.

As noted, this year's Conductors of Changes Forum supported three organizations that help people with disabilities, including all-Ukrainian Charitable Organization “Down Syndrome”, NGO ”Bachyty Sertsem”, and “Vidchui” Charity Fund. In the intervals between discussion sessions, all participants of the Forum could specify the organization that would receive 20% of the cost of their tickets. The organizers of Forum raised UAH 500 thousand that will soon be donated to the above mentioned NGOs.

“In addition to financial support, each of these organizations has already received and will receive something greater – our attention, ideas for new partnerships, and the opportunity to be heard and seen by you as conductors of changes,” said Kateryna Iurchenko, senior CR&S coordinator at Deloitte Ukraine.

To learn more about the Conductors of Changes VI Forum, please visit its official website.

Among the partners of the Conductors of Changes VI Forum were:

For coverage of the Conductors of Change Forum, please contact Anastasia Begheza at: abeheza@deloitte.ua, +38 095 8207913. 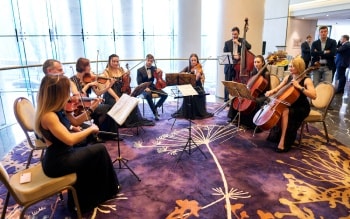 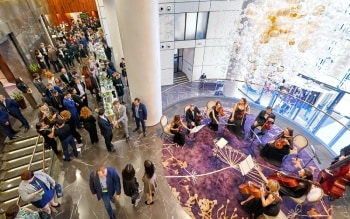 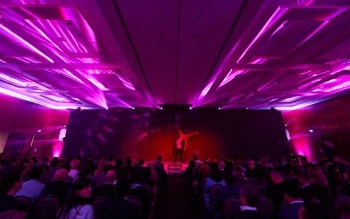 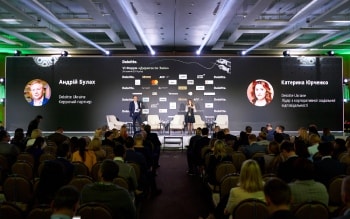 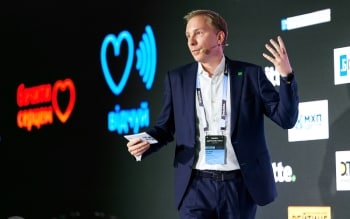 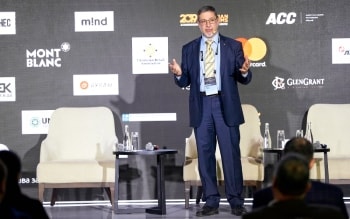 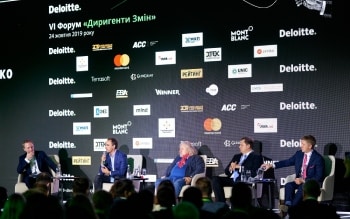 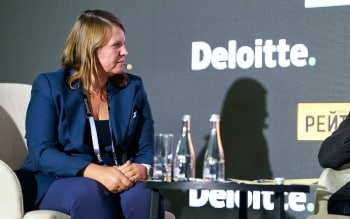 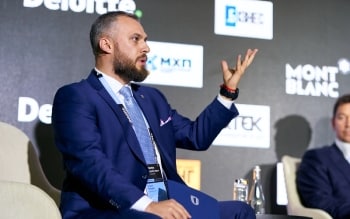 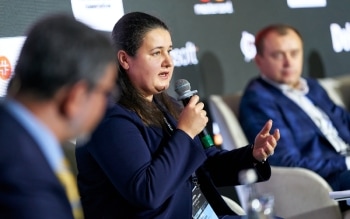 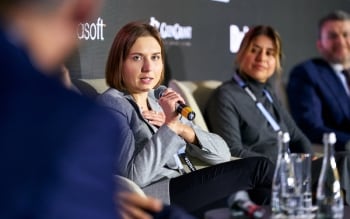 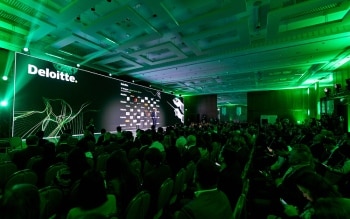 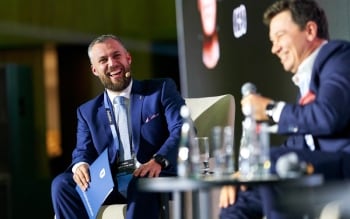 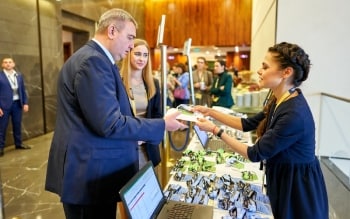 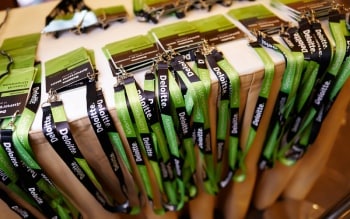 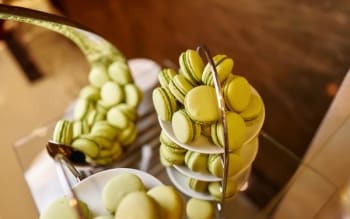