In 2019 we published a paper that included some estimates of how much investment would be required for a public charging network to meet the needs of a greatly expanded electric vehicle (EV) fleet.

Following the government’s announcement of a 10-point plan in November 2020, and the moving forward of the requirement for all new car sales to be zero-emission, we have revisited our estimates of the amount of investment needed to reach an appropriate level of electric vehicle charging infrastructure.

Our analysis suggests that in the 10 years to 2030, between £8bn and £18bn of investment in the electric vehicle (EV) charge point infrastructure will be required.

The annual sales of new battery electric vehicles (BEVs) will need to jump from just over 100,000 in 2020 to around 2.5 million in 2030, a huge increase. The public charging network will also need to be upscaled radically to serve all these BEVs, especially because many future purchasers will be people who do not have access to charging either at home or the workplace.

Between 2021 and 2030, the total number of Rapid (50kW DC) charge points is expected to increase 22-fold from the 2020 figure. Among AC chargers, the number of Fast (11-22kW AC) chargers will also grow 13-fold and Slow (3-7kW) chargers will grow at a slower pace (seven-fold). Ultra-rapid chargers are currently the fastest-growing segment but are not expected to occupy a large share overall. For a forecast to 2030, see Figure 1.

Figure 1. Forecasted number of charge points in the UK in 2030

Our most recent assessment of the investment required combines estimates of investment spending with operating costs in order to reach the annual amount needed to build and operate the EV infrastructure. Capital spending includes charge point devices, site preparation, and installation. Not included are the costs of land, or of grid investment by distribution network operators (DNOs) or various opportunity costs.

Our projections draw on the CCC figures, data from existing charge point installations, and a range of sources on current and potential capital and operating costs. See Figure 2 for three different deployment scenarios, low, medium or high uptake, based on CCC estimates. 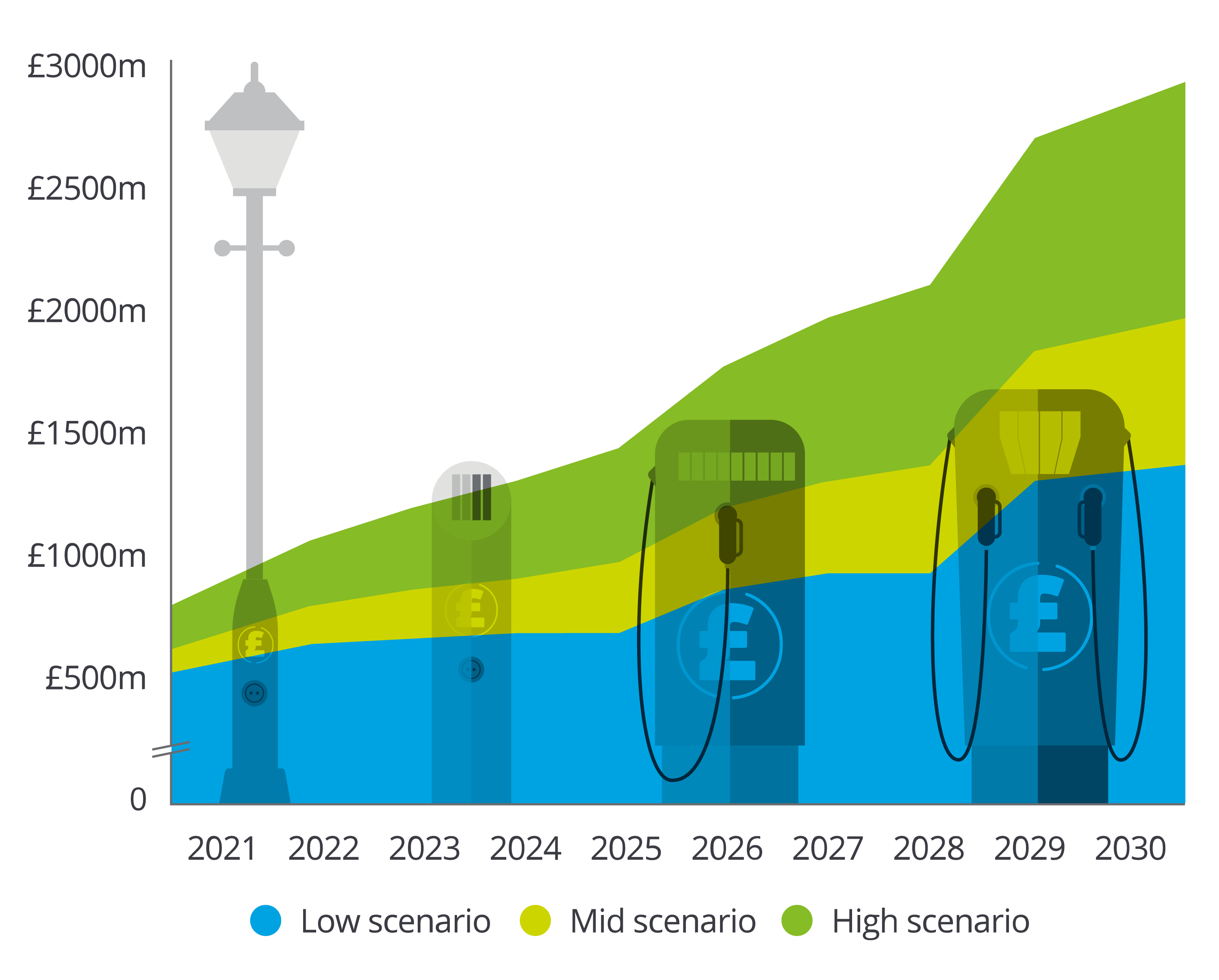 Expenditure breakdowns vary between the different types of charge points. A large proportion of lifetime costs for Slow and Fast chargers are operational: insurance, inspection and maintenance. The costs for Rapid and Ultra-rapid chargers include a bigger proportion of capital costs, which include the physical infrastructure itself and any necessary grid reinforcements.

In our analysis, the numbers of installed Rapid chargers will overtake Fast chargers by 2030, as the largest proportion of chargers by type. But by 2025, the midway point, Rapid chargers will account for approximately 70 per cent of the annual investment required, due to higher capital costs connected to their higher power rating.

Ultra-rapid chargers could also see a jump in demand as a greater number of BEV models are able to take a minimum charge rate of 125kW, which is estimated to happen from 2023 onwards. 2

Impact of EVs on the electricity network infrastructure

While much has been made of the impact that the increase in EV numbers will have on the grid, the reality is far less exciting. The grid has more than enough capacity at present to accommodate the expected increase in demand; and to a certain extent, technologies can be deployed to help moderate the peaks. In addition, a much heavier demand on the grid will come from the electrification of heat, over the same period, which will require up to three times as much capacity as EV charging. 3

Consider this: the heaviest demand for electricity that the transmission grid has experienced in the past was for 62GW in 2002. Since then, peak demand has fallen to about 50GW, usually in the middle of winter. Average demand is about 42GW. The maximum capacity of the grid is about 160GW; running it at this level would cause problems, but it could probably manage to run without difficulty at about 120GW, which is roughly three times current average use.

At a local distribution network level, there are pinch points. Areas with historical and active industrial or agricultural sectors have probably had the upgrades to the grid that will be needed to support EV charging. But some areas currently have limited capacity for a big surge in demand. Examples include Coventry, where the grid is older and rated to a voltage that is not big enough for today’s requirements, and Lincolnshire, which is predominantly rural.

A lot depends on the speed of the uptake in EVs, and who is doing the vehicle charging, and when. Estimates by National Grid indicate that EV charging could add between 3GW to 8GW to peak demand by 2030, increasing to 13 - 20GW by 2040. Areas where EV concentration is highest or where grid constraints are already an issue could require reinforcement of the substation infrastructure.

The CCC estimates that new investment needed in the distribution network for both EVs and electrified heat would require up to £50 billion by 2035, or about £1.8 billion per year. This is about four per cent of the total cost of the electricity system. Two-thirds of this would be for the reinforcing of networks of cables buried underground, and the rest would be for overhead lines and transformers. Most of these reinforcements will be in semi-rural areas.

The deployment of key technologies—for demand management and battery storage—can create flexibility within the system, which could reduce the investment required for these reinforcements by around 10 per cent to 2035. Figure 3 shows how much flexible systems can increase capacity on the low voltage network.

Figure 3: Number of EVs that can be connected before transformer capacity is reached without/with flexible charging

Given that most cars are parked 90-95 per cent of the time, they do not need to charge every day or whenever the car is not being used. Most vehicles can also programme charging times to make use of off-peak electricity pricing. Households with off-street parking, and those using slow lamppost or residential on-street chargers, can do it overnight to avoid peak periods.

Peak demand growth, the principal driver of network cost growth, could be caused by the widespread roll out of charging locations to serve the ‘Around Town’ and ‘En Route’ segments. These segments are less adaptable to moving demand to off-peak periods; and a certain amount of grid reinforcement will therefore be necessary.

Costs for a DNO upgrade are very much a postcode lottery and depend on what the area requires. According to an estimate by a DNO, network upgrades can range from £60k to £2m to connect new rapid and fast charging stations. This could involve a new substation, overhead lines, transformers, additional switching, or other reinforcement. These costs would be paid for by the company wanting the extra capacity / new connection, such as a charge point operator, although a second-comer rule does permit some of this to be rebated.

In capacity-constrained areas, it might be more economical to relocate existing charging sites, such as fleet depots or taxi ranks. Alternatively, the use of on-site battery storage could help manage peak demand and minimise reinforcement costs.

The prospect of bi-directional vehicle-to-grid (V2G) charging is touted as a method to manage peaks. The idea is that a charged car battery can send its power back to the grid during peak periods. Aggregated over tens of thousands of cars, this can provide a meaningful amount of power.

One pilot study suggested that the implementation of V2G technology could result in a whole system net saving of £180m per annum, increasing to between £220m-£270m by 2030.

The realisation of these benefits depends in part on the reduction in V2G charge point costs. In 2020 a 7kW V2G charge point was approximately £6,000 more than a ‘dumb’ charger. These prices are expected to fall thanks to technological advances in semiconductor technology, which could close the gap to between £656 and £1,164.

Studies have also explored how the use of V2G technologies could provide incomes to car owners. These range from £400 to £1,140 per annum and are based on the fact that most vehicles remain parked for 90 per cent of the time.

It should be noted, however, that V2G technology is not available in most EVs. At present, only Japanese models using ChaDeMo connectors can send power bi-directionally. The studies citied, while promising, are pilots and there has been no deployment in wider settings.

To conclude, the next ten years will see a big jump in the number of EVs on our roads. With this will come the need for a public charging network that is over ten times its size today. It will cost a pretty penny—as much as £18bn, according to our estimates. The good news is that companies from a variety of sectors are entering or expanding their presence in the market, so we anticipate that investors will meet the moment.

The electricity grid will require some upgrading. But this will be due to decarbonisation efforts to clean up the environment, especially around heat and transport modes other than EVs. For that reason, we see this as a manageable process as the charging roll-out gathers pace. As the grid is modernised and the capacity expanded, new hardware and software solutions, such as smart charging and vehicle-to-grid capability, will need to be integrated.

It will not happen in one fell swoop, but the various stakeholders, such as central and local governments, DNOs, and charging providers, will need to chart the future state of play and work backwards to ensure that today’s efforts result in the desired outcomes: a stable, secure provision of clean electricity; comprehensive and consistent coverage across the nation; and a range of charging speeds and price points to accommodate consumer preferences.

1. This includes replacement of chargers at the end of their useful life. This lifespan is assumed to be eight years, taking into account technology development and need the need for up-to-date charge points.
2. As an example, Volkswagen’s MEB platform is expected to be compatible with 125kW+ DC chargers and will underpin a wide range of mass-market models from VAG and Ford, ranging from SEAT hatchbacks to Audi SUVs.
3. National Grid FES estimates that electricity for home heating will increase from 24.5GW in 2019 to anywhere from 28 to 42GW by 2030.

Hurry up and... wait 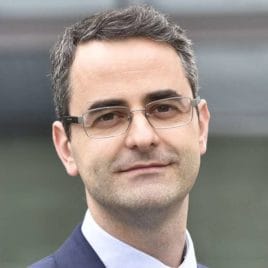 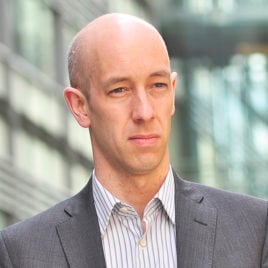 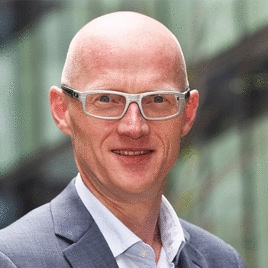