UK consumer confidence fell for the fifth consecutive quarter in Q3 2022, falling by one percentage point to a historically low -20%, according to Deloitte’s latest Consumer Tracker. Spending power also remains significantly strained, as consumer sentiment around levels of debt also reached the lowest levels on record, at -17%; two percentage points below Q2 2022.

The Deloitte Consumer Tracker is based on responses from 3,226 UK consumers aged 18+ between 17th and 18th September. Overall consumer confidence has fallen to its lowest level since the tracker began in Q3 2011.

Consumers cut back to curb costs

Both essential and non-essential spend declined for a second consecutive quarter in Q3, decreasing by two and one percentage points respectively, indicating that consumers are cutting back across all areas. 30% of consumers said they are now spending less, up from 21% at the start of the year. Of these consumers, 58% said they are spending less specifically to save money.

Céline Fenech, consumer insight lead at Deloitte, commented: “Consumers are making conscious efforts to cut-back on all spending. With rising food prices and personal finances coming under further pressure from higher energy bills, we are seeing a contraction in consumer demand.”

Consumers highlight several actions they are taking to combat rising costs. This includes 57% who are reducing their home energy consumption, 40% who are spending less on clothes and shoes, and 22% of respondents who have ended, or intend to end, an entertainment subscription.

Consumers turn their hand to selling, and shop the second-hand market

Growing interest in the second-hand market saw one in five consumers selling items on resale platforms in Q3. 16% of consumers bought more second-hand or refurbished items in Q3, more than twice the 7% that did so in Q3 2020.

Fenech added: “Whilst we are seeing consumers reducing their overall spend, some are also trying to boost their income by reselling items they no longer need or use via reselling platforms. The demand is clearly there as we are also seeing more consumers interested in buying second-hand items, as a way to save.”

Two in five (39%) consumers said they are spending less on going out and on leisure activities as a way to save money. As a result, net spend across leisure fell quarter-on-quarter by two percentage points, to -12%, in Q3 as consumers eat out less and limit their visits to coffee shops, pubs and bars, and to culture and entertainment venues. One exception, attending sports events, was the only area of leisure to see a quarter-on-quarter improvement. This follows a busy period of sporting events; many of which having returned to full-scale audiences again.

Simon Oaten, partner for hospitality and leisure at Deloitte, said: “The hospitality industry has been one of the hardest-hit in recent years. As consumers assess their budgets amidst rising costs, many are having to prioritise the essentials, directing spend away from discretionary categories, including leisure. Many hospitality businesses are already feeling the effects of lower footfall, whilst also having to counteract rising running costs themselves.”

Consumers indicated that they will spend even less on leisure in Q4 2022, with intended net spend down across every leisure category, at a time when 59% of consumers believe they will have less money to spend for the Christmas period.

Oaten concluded: “For the hospitality industry, a reduction in typical festivities or diversion of these to home will almost certainly take the shine off the ‘golden quarter’. Businesses may want to adapt to hosting smaller groups or catering, once again, for more take-home entertainment.”

Consumers remain pessimistic on state of the economy

Consumer sentiment towards the state of the UK economy remains low, at -80%, and at similar levels last seen in Q1 2020 at the start of the UK’s COVID-19 outbreak. Coupled with declining sentiment around job opportunities and career progression, down two percentage points, and sentiment on job security remaining flat, quarter-on-quarter, consumers are reflecting concerns around job prospects by adopting more recessionary spending behaviours.

This comes at a time when CFOs of the UK’s largest firms attach a 78% probability to the UK falling into recession in the next 12 months.

Ian Stewart, chief economist at Deloitte, commented: “High inflation has driven consumer sentiment sharply lower this year despite a red hot labour market. Now consumers are starting to worry about the outlook for jobs. With inflation elevated, interest rates on the rise and the labour market starting to cool the squeeze on spending is likely to intensify.” 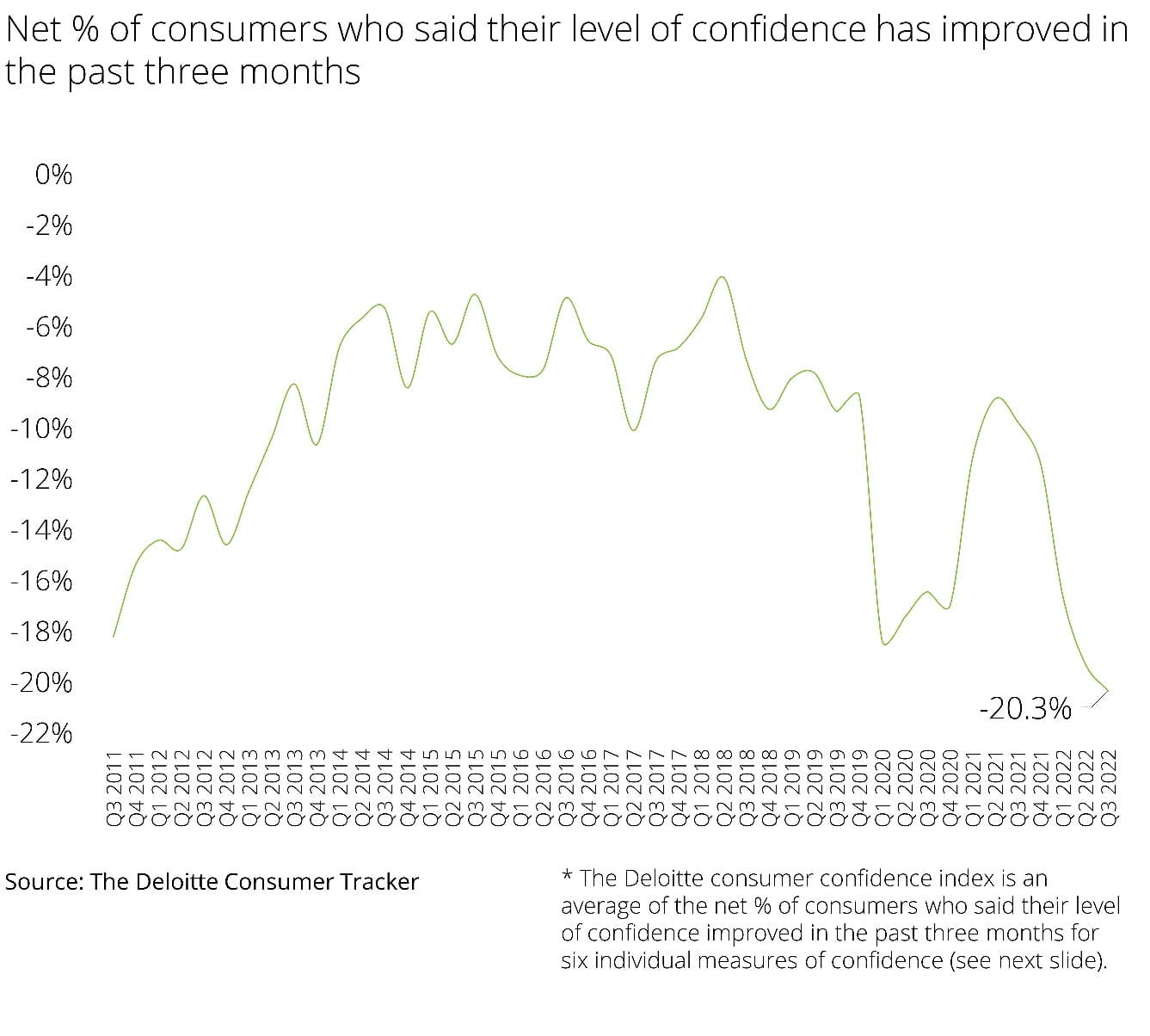 The Deloitte Consumer Tracker is based on a consumer survey carried out by independent market research agency, YouGov, on Deloitte’s behalf. This survey was conducted online with a nationally representative sample of 3,226 consumers in the UK aged 18+ between 17th and 18th September 2022. Overall consumer confidence is calculated as an aggregate of six individual measures: job security, job opportunities, household disposable income, level of debt, children’s education and welfare, general health and wellbeing. Since Q3 2019, respondents have been asked their view on the state of the UK economy.