The European football market as a whole saw revenues grow by 10% to €27.6bn in 2020/21 (€25.2bn in 2019/20) despite an almost complete absence of fans from stadia during the season, according to the 31st Annual Review of Football Finance from Deloitte’s Sports Business Group.

The strong recovery in revenue terms of the European market, which contracted for the first time in over a decade in the 2019/20 season due to the impact of COVID-19, was fuelled by deferred broadcast revenues and the success of the delayed UEFA EURO 2020 tournament.

Largely attributable to deferred broadcast revenue, Premier League club revenues grew by 8% to €5.5bn in 2020/21. By contrast, the Bundesliga - which experienced the lowest uplift in aggregate broadcast revenue of the ‘big five’ in 2020/21 - reported a 6% fall in revenue to €3.0bn.

Revenues in Spain’s La Liga also contracted by 6% to €2.9bn. La Liga clubs collectively recorded a loss in operating profits for the first since the Sports Business Group began tracking this data on a club-by-club level, in the 2013/14 season.

Clubs in Serie A experienced the greatest percentage growth in aggregate revenues of any ‘big five’ league in 2020/21, increasing by 23% to a record high of €2.5bn. Driven by a 48% increase in broadcast revenue due to significant deferrals, it is the only league to have reported higher combined revenues than before the start of the COVID-19 pandemic.

Ligue 1 fell further behind Serie A in revenue terms, with the divide between the two league’s total revenues having doubled to over €900m. Ligue 1 clubs revenues grew by just 1% during the 2020/21 season to €1.6bn, as the curtailment rather than postponement of the competition led to very limited deferred revenue being recognised.

Tim Bridge, lead partner in the Sports Business Group at Deloitte, said: “Clubs across Europe played a significant proportion of matches behind closed doors or with reduced capacity during the 2020/21 season which caused an almost complete loss of matchday revenue. It’s testament to the resilience of the industry, the value driven by broadcast deals and the success of the Euros that the European football market has achieved tenacious growth, in revenue terms, over the past year.

“However, it is important not to overlook the loss-making position of many clubs. The impact of the COVID-19 pandemic fundamentally changed the financial management of European football, with leagues and clubs having to seek external investment and responding to a shift in trends around transfer spending and club operations.

“Leaps made to boost financial sustainability through new UEFA regulations and to professionalise the women’s game will challenge clubs to break from tradition, potentially boosting profitability in a notoriously loss-making industry and creating a more inclusive environment for all. It is an exciting period, but one to be well prepared for.”

30 years of the Premier League

Despite matchday revenue falling to just £31m, Premier League club revenues increased by 8% to £4.9bn in 2020/21, following the league’s first ever drop in revenues in the previous season.

This increase is largely attributable to the reported broadcast rebate of £330m which suppressed 2019/20 revenue, and the deferral of some broadcast income from the 2019/20 season into the 2020/21 financial period.

Premier League clubs’ wage costs increased 5% to £3.5bn in 2020/21, with only seven of the 17 consistent Premier League clubs reporting a reduction in wages. As a result of revenue growth outstripping the increase in wages, the division’s wages/revenue ratio reduced slightly from 73% to 71% in 2020/21.

Deloitte predicts that a return of fans to full stadia, new broadcast deals and improved commercial deals will boost Premier League revenues to exceed £6bn in the 2022/23 season.

Bridge continued: “As the Premier League enters its fourth decade, it’s further ahead of the competition than ever before, having emerged from the pandemic without as significant an increase in net debt as many might have expected. The stark reality, however, is that the league last broke even at a pre-tax level in the 2017/18 season, highlighting the crucial need for strong governance and financial planning in the years ahead.”

Championship clubs’ wage costs exceeded revenues for the fourth-consecutive year with a record high wages/revenue ratio of 125%. Whilst in aggregate Championship clubs managed to reduce wage costs by 8% to £747m, these savings were exceeded by the loss of overall revenue.

In 2020/21, League One club revenues fell by 22% to £129m, while League Two club revenues fell by 4% to £94m. The negative financial impact of the COVID-19 pandemic meant that the average of League One clubs’ wage costs of £5.5m surpassed revenue for the first time with a wages/revenue ratio of 103%. For League Two clubs the average wage cost was £3.1m, with a wages/revenue ratio of 80%.

Bridge continued: “There now can be no doubt that significant change is required to drive long-term financial sustainability in the Championship. Without sustained collaboration across the English football system the gap to the Premier League, the competitive advantage of clubs with parachute payments and the cycle of clubs gambling on promotion will continue to increase.”

Multi-club ownership (MCO) has grown in popularity, with over 70 MCOs now thought to be in existence, more than double the amount only five years ago (28). Nine of the 20 Premier League clubs operate within a MCO model.

Sam Boor, sports M&A advisory lead in Deloitte’s Sports Business Group, said: “Football is proving an attractive opportunity for a growing pool of international investors, whose confidence has been buoyed by clubs’ recovery post-COVID. To ensure that new investment brings value to all - those on the pitch, in the stands and in the boardrooms - the importance of responsible investment, which protects the financial and operational sustainability of clubs, cannot be overemphasised.” 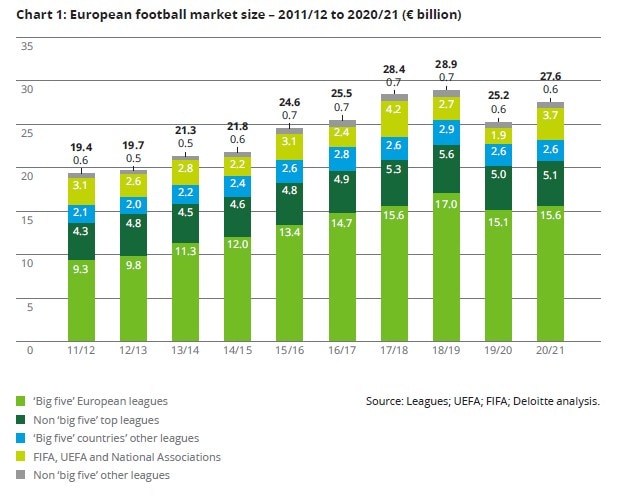 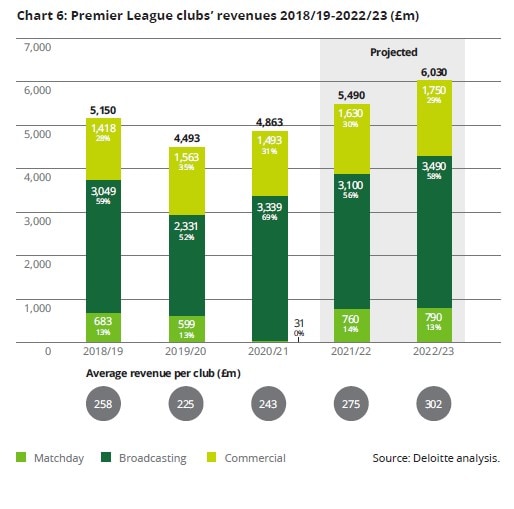 The average exchange rate for the year ending 30 June 2021 has been used to convert figures between euros and pounds sterling (£1 = €1.13).

Over the last 30 years Deloitte has developed a unique focus on the business of sport. Our specialist Sports Business Group offers a multi-disciplined expert service with dedicated people and skills capable of adding significant value to the business of sport. Whether it is transactions advice, benchmarking or strategic business reviews, operational turnarounds, revenue enhancement strategies or stadium/venue development plans, business planning, market and demand analysis, acquisitions, due diligence, expert witness, audits, or tax planning; we have worked with more clubs, leagues, governing bodies, stadia developers, event organisers, commercial partners, financiers, and investors than any other adviser.

The information contained in this press release is correct at the time of going to press. For more information, please visit www.deloitte.co.uk