European football market contracts for first time in over a decade

In absolute terms the ‘big five’ European leagues – representing a record high 60% share of the European football market - bore the most significant financial impact with combined revenues declining by 11% (€1.9bn/£1.7bn) to €15.1bn (£13.2bn).

Germany’s Bundesliga reported the smallest fall (4%, €137m) in total revenue as the season was completed pre-financial year-end and there were only minimal rebates payable to broadcasters. The Bundesliga generated revenues of €3.2bn (£2.8bn) and surpassed La Liga (€3.1bn/£2.7bn) as the second highest revenue-generating football league in 2019/20 after La Liga revenues fell 8%. We expect that La Liga will revert to being the second highest revenue generating league in 2020/21.

Dan Jones, partner and head of the Sports Business Group at Deloitte, explained: “It will be a number of years before the full financial impact of the COVID-19 pandemic on European football is known. But we’re now beginning to see the scale of the financial impact that the pandemic has had on European clubs.

“It should be noted that while it is now 16 months since the pandemic struck in Europe, the analysis in this report focuses on the 2019/20 financial year and hence only accounts for, in most cases, three months of COVID-19 impact. The suspension of leagues led to the misalignment of season completion and typical financial reporting periods across England, Spain and Italy. This will lead to some elements of revenue and costs related to the 2019/20 season being recognised in the financial year ending 2021, and hence next year’s edition of Deloitte’s Annual Review of Football Finance.”

Shock from COVID-19 hits profitability across the Premier League

As reported by Deloitte in June, Premier League clubs’ combined revenues declined by over half a billion pounds (£648m, 13%) in the financial year 2019/20 to £4.5bn, the first drop in total revenue in Premier League history. Despite this, in revenue terms, the Premier League was still 60% larger than its nearest competitor, the Bundesliga, although this gap has decreased from 73% in 2018/19.

Due to the relatively fixed nature of Premier League clubs’ costs and the decline in revenue, collective operating profits were almost completely wiped out. Premier League clubs’ average wages to revenue ratio also increased to a record 73%. The increase in cumulative pre-tax losses was stark, rising to almost £1 billion (£966m) in 2019/20, an increase of over £800m compared to 2018/19, with 15 clubs reporting pre-tax losses.

Jones added: “What we can see clearly is the relatively fixed nature of elite clubs’ cost base and in particular wage costs. Due to the multi-year structure of player contracts, clubs have found it very difficult to offset the shock to revenue caused by COVID-19 by reducing wage costs. It will be interesting to see how the balance of wages and revenues develops in 2020/21 and beyond, and whether the hitherto seemingly inexorable growth in wages slows, stops or reverses.”

The three EFL divisions reported a combined revenue reduction of 13% to £943m, with the Championship reporting the largest fall in revenue (14%) from £786m to £679m due to lost matchday revenue and the deferral of some broadcast revenue into the next financial reporting period. 2019/20 was the first season of the EFL’s new broadcast right deals, at values reported to be 35% up on the previous agreement, which offset lost revenue to some extent.

For the first time since 2003/04 the Championship clubs reduced their cumulative wage costs, falling from £839m to £813m in 2019/20. This was driven by a number of factors including club mix within the division, the deferral of wage costs into the next reporting period and the impact of COVID-19 specific measures such as the use of furlough and temporary wage cuts. If wage costs for the consistent Championship clubs across both 2018/19 and 2019/20 are isolated, there is an average increase in wages costs of 4% per club. Despite the overall decline in total wage costs, the wages-to-revenue ratio for Championship clubs rose to a record high 120% in 2019/20.

Championship clubs’ cumulative operating and pre-tax losses both worsened in 2019/20, with operating losses increasing by 16% to £434m as falling revenues could not be offset by similar reductions in wage costs. At the pre-tax level the increase in losses was more stark as only three clubs reported a pre-tax profit. Pre-tax losses worsened by 94% to £508m, with the three clubs reporting a pre-tax profit only doing so after strong player trading reversed reported operating losses.

Izzy Wray, manager in the Sports Business Group at Deloitte, commented: “Given the historic loss-making nature of the majority of EFL clubs, they have shown remarkable resilience when navigating the impact of the pandemic. As Championship clubs, and to a greater extent League 1 and League 2 clubs, rely more heavily on matchday revenue than Premier League clubs it will likely be sobering to see the impact of a full season with very limited matchday attendance in next year’s edition. Another interesting number to watch will be wage costs, and whether this year’s reductions are a one-off, or a sign of a sustained effort by clubs to exercise greater control over their wage spending.”

The impact of the COVID-19 pandemic on matchday revenue in the 2019/20 financial year is clear, but the impact on the two largest revenue streams of the ‘big five’ leagues, broadcast (which makes up 51% of 'big five' league club’s revenues) - and commercial (36%), remains more uncertain.

Sam Boor, senior manager in the Sports Business Group at Deloitte, added: “Since COVID-19 changed the landscape of top-level European football we have seen developments in the broadcast rights market across a number of ‘big five’ leagues. The Premier League chose to renew their agreements with existing domestic partners at reportedly the same value in what may prove to be an astute decision, while Serie A reportedly agreed a 5% reduction in value in their new domestic deal. Other leagues, including Ligue 1, have experienced more turbulence. We will find out over the coming seasons if these examples of flat renewals and declines are a trend that is here to stay, or a temporary pause.”

Jones concluded: “Despite the uncertainties of the past year, football - and the public interest in it - has shown great resilience. We are hopeful that the 2021/22 season will be a step towards normality, resulting in a strong recovery in revenue terms across the coming seasons.” 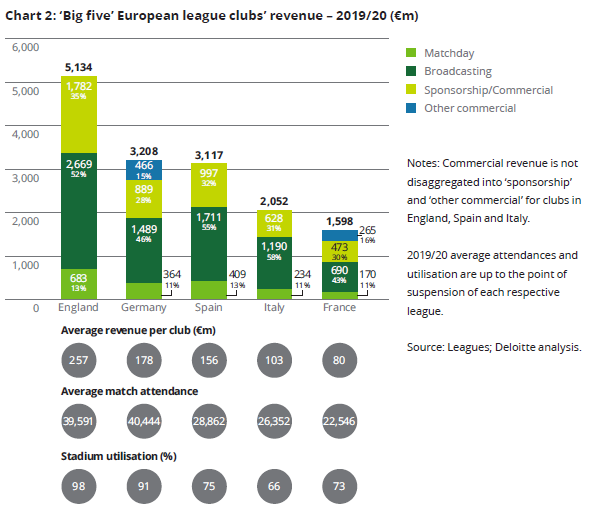 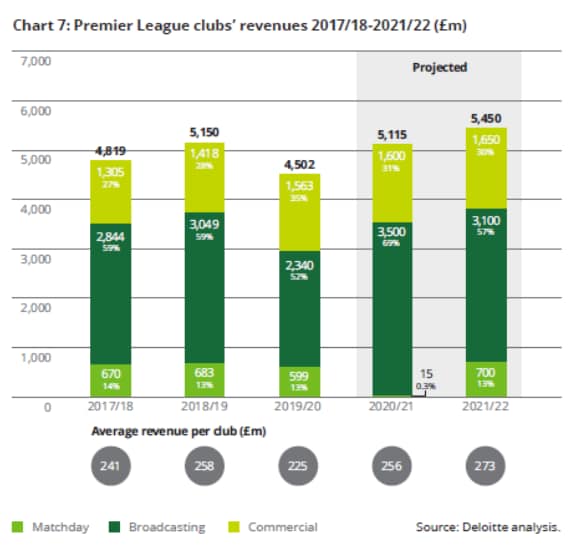 Exchange rate
The average exchange rate for the year ending 30 June 2020 has been used to convert figures between euros and pounds sterling (£1 = €1.14).


About the Sports Business Group at Deloitte
Over the last 30 years Deloitte has developed a unique focus on the business of sport. Our specialist Sports Business Group offers a multi-disciplined expert service with dedicated people and skills capable of adding significant value to the business of sport. Whether it is benchmarking or strategic business reviews, operational turnarounds, revenue enhancement strategies or stadium/venue development plans, business planning, market and demand analysis, acquisitions, due diligence, expert witness, audits or tax planning; we have worked with more clubs, leagues, governing bodies, stadia developers, event organisers, commercial partners, financiers and investors than any other adviser.