The rising cost of living has forced UK consumer confidence to a record low of -19% in Q2 2022, according to Deloitte’s latest Consumer Tracker, as rising inflation and subsequent price increases tighten the squeeze on consumer spending power. Consumers are most pessimistic about their household disposable income, with sentiment also dropping to an all-time low of -55% this quarter.

In addition, 62% of consumers are now spending more, compared to less than half (49%) this time last year. Of these, 86% say their increased spend is specifically due to higher prices. Adjusted for the whole population, it means that the rising cost of living is now driving greater expenditure for more than half (53%) of all UK consumers.

The Deloitte Consumer Tracker is based on responses from 3,031 UK consumers between 17th and 21st June 2022, in the immediate days following the UK’s interest rate rise to 1.25%.

Céline Fenech, consumer insight lead at Deloitte, commented: “With inflation going up faster than average earnings, there are now more consumers feeling the cost-of-living pinch than not. In a sign of the times, the biggest jump in spend this quarter is on energy and housing costs, including rent and mortgages.

“The current situation means consumers are significantly changing their spending behaviours to adapt. This might be by simply buying less, switching to cheaper brands or stores, and postponing major purchases. Some are also seeing an opportunity in reselling and purchasing second-hand goods.”

Compared to the previous quarter, Deloitte’s spending sentiment data fell across both day-to-day and non-essential items - by two and five percentage points, respectively - indicating that consumers are cutting their overall expenditure.

Fenech, continued: “With consumer spending equating for half to two-thirds of all economic activity, this could signal major headwinds for the UK economy.”

Number of consumers switching to cheaper brands to save money doubles

Whilst the majority of consumers have seen their expenditure increase in Q2 2022 due to inflation, a growing number of consumers are, conversely, spending less; 27% in Q2, up from 21% in Q1. Of those spending less this quarter, 58% say it is in an effort to save money, with 45% choosing cheaper brands; more than twice that were doing so a year ago (19%).

Fenech continued: “Inflationary pressures and rising fuel and food bills are having a combined effect on consumer behaviours and, for many, cost is being prioritised over brand loyalty. With inflation expected to rise further this year, consumer businesses must ensure they are able to adopt ‘price elasticity’; stretching their product ranges across budget and premium to suit every consumer pocket.”

Sentiment around the state of the economy in Q2 fell to -83%, the lowest level since the start of the COVID-19 pandemic, when the measure hit an all-time low of -88%. With further interest rate rises on the way, consumer sentiment around the economy could fall further. This would impact already declining sentiment in job opportunities, and job security; down quarter-on-quarter by two and four percentage points, respectively.

Ian Stewart, chief economist at Deloitte, commented: “Consumers are facing levels of inflation that have not been seen in 40 years and a growing risk of recession. Consumer sentiment about the outlook for the economy has plummeted. While the headline job numbers remain strong, our survey shows that consumers are anticipating a cooling in the labour market.”

Amidst growing challenges from inflation and rising interest rates the Chief Financial Officers of the UK’s largest firms now expect the economy to fall into recession within the next 12 months.

Stewart continued, “For consumers, inflation will get worse before it gets better. The lowest income households are facing the greatest pressure but, with inflation set to hit the 11% mark this autumn, the squeeze will be felt across the board.”

The second quarter of the year saw spending fall across almost every category of leisure, with eating out, drinking in pubs and bars, and in-home entertainment seeing the most dramatic quarter-on-quarter fall; by -19, -14, and -13 percentage points, respectively.

However, many consumers have made the most of this year’s additional bank holiday and continued to book both long and short breaks; in some cases, funded through the redemption of vouchers from COVID-cancelled trips.

The return of many summer events has also lifted spend in this category, albeit only by three percentage points compared to the same time last year, signalling that consumers are reining in on non-essentials.

Simon Oaten, partner for hospitality and leisure at Deloitte, said: “The return of summer events, many for the first time in three years, has met pent-up demand amongst leisure consumers. From full-capacity weddings, to cricket and live music, consumers have clearly enjoyed a return to a ‘normal’ summer schedule, aided in many instances with good weather.

“However, the outlook for the next quarter is less sunny, with consumers indicating that they will be reducing their spending across every leisure category.

“Until then, many continue to book long-awaited holidays and hotel stays, both abroad and in the UK. The speed of recovery may be hindered by further disruption in the UK’s transport network.” 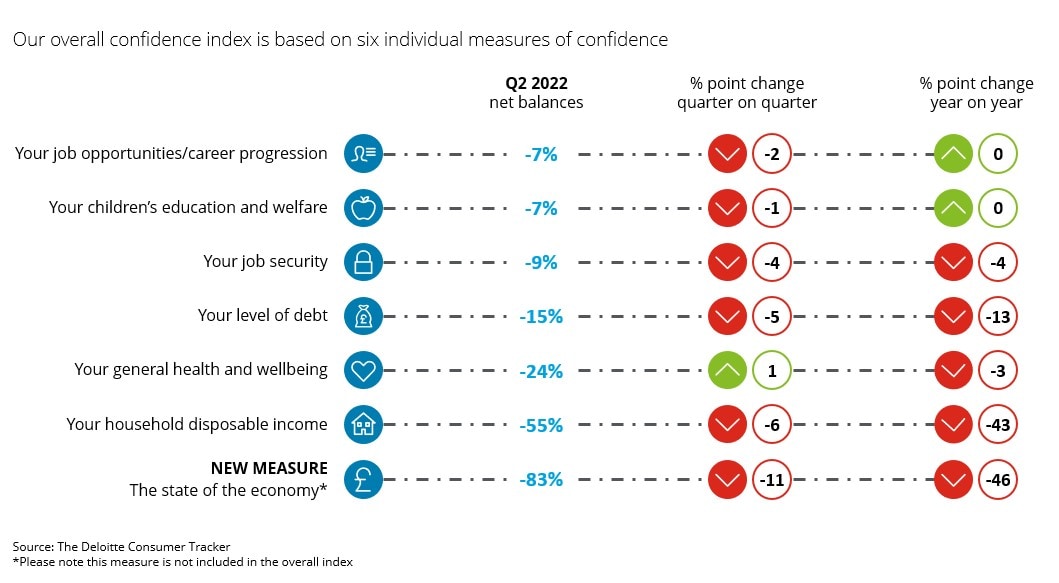 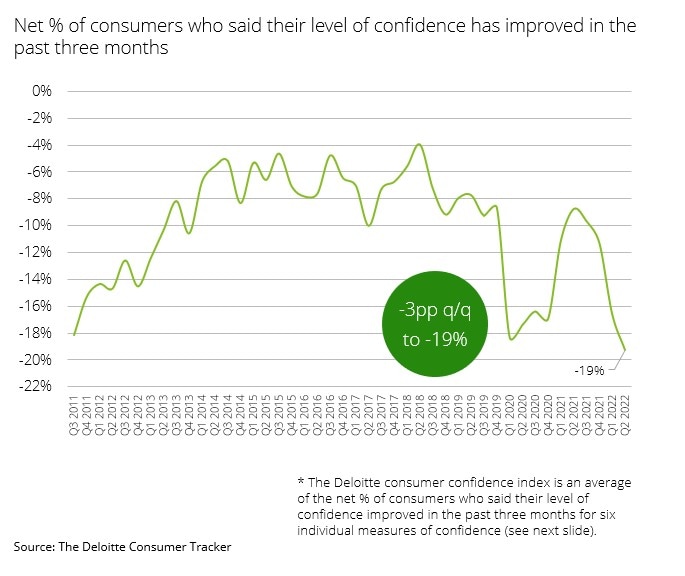 The Deloitte Consumer Tracker is based on a consumer survey carried out by independent market research agency, YouGov, on Deloitte’s behalf. This survey was conducted online with a nationally representative sample of 3,031 consumers in the UK aged 18+ between 17th and 21st June 2022. Overall consumer confidence is calculated as an aggregate of six individual measures: job security, job opportunities, household disposable income, level of debt, children’s education and welfare, general health and wellbeing. Since Q3 2019, respondents have been asked their view on the state of the UK economy.