Eases some timeframes for ACOs taking on risk

Broadly, the MSSP final rule moves ahead with many policies included in the proposed rule, while making certain modifications to meet CMS’ two stated goals of, “Promoting accountability by accelerating the move to two-sided risk while promoting competition by encouraging participation by low revenue ACOs.”

To move forward with the changes, CMS finalized a one-time new agreement period start date of July 1, 2019. CMS will resume the annual application cycle for the performance year beginning January 1, 2020, and subsequent years. To ensure continuity, current MSSP participants whose agreements would have expired at the end of 2018 had the option to extend their agreement until the July 1 start date. The application deadline for all July 1 starts was February 19, 2019. After July 1, all ACOs entering new participation agreements will operate under the restructured MSSP program (more detail provided below).

Importantly, the final rule distinguishes between low- and high-revenue ACOs in terms of eligibility to participate in the two payment tracks, moving high-revenue ACOs to a faster pace to risk. The proposed rule indicates that low-revenue ACOs generally will be more common in rural areas and among smaller, physician-only ACOs, while higher-revenue ACOs in many cases will include a hospital. In addition to revenue differences, the final rule makes a new distinction between ACOs that are experienced or inexperienced with performance-based risk Medicare ACO initiatives.

At the end of 2018, 460 of the 561 MSSP ACOs (82 percent) participated in Track 1, featuring only shared savings. Of the 460 Track 1 participant, 82 ACOs’ second participation agreements under Track 1 were due to end on December 31, 2018, requiring them to move into an MSSP track with downside financial risk or leave the program. CMS reports that 90 percent of ACOs with agreements that expired at the end of the year has signed six-month extensions that would allow them to renew their agreement on July 1 under the new rules.

Overall, CMS projects that the final changes will result in a net reduction in Medicare spending of $2.9 billion for the period of 2019 through 2028; an increase from the proposed rule due to higher levels of participation, lower overall shared savings payments to ACOs, and an increase in incentive payments under the Medicare Access and CHIP Reauthorization Act (MACRA) Quality Payment Program (QPP) for qualifying participants in Advanced Alternative Payment Models.

Additional details on the “BASIC” and “ENHANCED” tracks are presented below. Other key provisions of the proposed rule also are summarized.

Overview of pathways to success: BASIC and ENHANCED Tracks

The final rule discontinues Track 1 and Track 2 under MSSP and similarly discontinues the option for ACOs to renew participation in either track.

Instead, the Pathways for Success initiative restructures MSSP into two tracks:

Both the BASIC and ENHANCED tracks feature five-year participation agreements, with variations in when and to what degree a participating ACO must assume the risk. In addition, the Center for Medicare and Medicaid Innovation will discontinue future applications cycles for the Track 1+ demonstration project under the rule’s Pathways for Success initiative.

The BASIC track, which contains elements of the prior Tracks 1 and 2, begins as a one-sided model for eligible ACOs and gradually transitions to a level of risk-bearing that qualifies as an Advanced APM under MACRA’s QPP by the final year of the five-year participation agreement.

The BASIC track is further delineated into five levels, with levels A and B representing one-sided arrangements, and levels C, D, and E requiring increasing levels of downside-risk. In general, BASIC track ACOs will advance at the start of each performance year along the progression of risk-reward levels. However, the final rule provides for BASIC track ACOs to move more quickly to higher levels of risk and potential shared savings in the initial years of the participation agreement.

The final rule increased total savings received by ACOs under a one-sided risk arrangement from 25 percent to 40 percent of savings below established benchmarks, increasing to 50 percent when the ACO takes on risk.

The ENHANCED track is modeled after the existing MSSP Track 3, including the same shared savings and shared loss rates (see below).

Overview of prior and new MSSP Payment Tracks 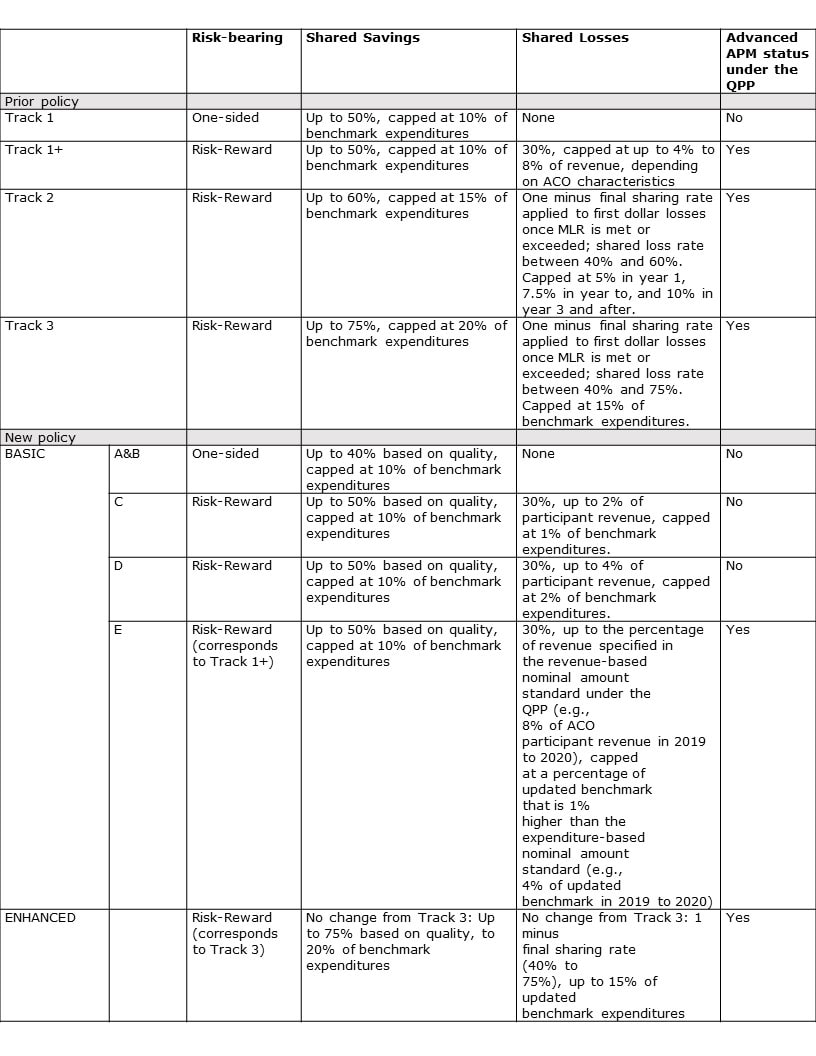 Under the final rule, an ACO would be considered to be low revenue if its ACO participants’ total Medicare Parts A and B fee for service (FFS) revenue for assigned beneficiaries was less than 35 percent of the ACO’s assigned beneficiary population’s total Medicare Parts A and B FFS expenditures. The 35 percent standard is a marked increase from the proposed rule’s 25 percent threshold. Low-revenue ACOs are generally more common in rural areas and among smaller, physician-only ACOs. CMS projects that the threshold increase will “allow more ACOs with small hospitals as ACO participants, including small rural hospitals, to be considered low revenue ACOs, while continuing to ensure that ACOs with large institutional providers are considered high revenue ACOs.” CMS models predict that 31 additional ACOs will participate as a result of this policy change, representing a 13 percent increase from prior estimates.

After the initial five-year participation agreement in the BASIC track, higher-revenue ACOs will be required to move to the ENHANCED track, corresponding to the prior Track 3 ACO model.

As a result, new ACOs entering the BASIC track’s “glide path” for an period beginning on July 1, 2019, would have up to up to 3.5 years under a one-sided model in the case of low-income ACOs that are new to MSSP. Most other new applicants will have 2.5 years under a one-sided model while existing ACOs that have participated in Track 1 will have 1.5 year before automatically advancing into two-sided risk-bearing agreements.

In an effort to improve the accuracy of the benchmarks against which ACO performance is measured, the final rule revises the benchmark methodology to incorporate factors based on regional fee-for-service (FFS) expenditures in the first ACO performance year, rather than the second or subsequent performance period.

The final rule’s benchmarking provisions are largely unchanged from what was initially proposed. The changes are designed to mitigate the positive or negative impact of the regional adjustments used to establish and reset the ACO benchmark by:

The final rule discontinues prior methodology for annually risk adjusting the benchmark for newly assigned and continuously assigned beneficiaries but makes some adjustments from what was initially proposed.

As noted in the table below, future agreement periods would increase the regional adjustment weighting for such organizations.

The final methodology also allows for upward risk score adjustments to reflect changes in health status of up to 3 percent over the length of the agreement period, but CMS declined to finalize a proposed -3 percent limit on risk score decreases.

CMS finalized a plan to use a blend of regional and national growth rates based on Medicare FFS expenditures to calculate the regional trend and update factors. This approach will have CMS increase the weight of the national component of the blend as the ACO’s regional area increases. CMS expects this approach to yield:

CMS further notes that moving from a three- to a five-year agreement period allows for longer-range planning for ACOs to meet and exceed established benchmarks with less concern for a total rebasing on a more frequent timeframe.

To implement a provision of the Bipartisan Budget Act of 2018 (BBA), the rule finalizes flexibility for ACOs to choose prospective beneficiary assignment or preliminary prospective assignment with retrospective reconciliation. ACOs will make the choice prior to the start of each agreement period and will be permitted to change that selection for each subsequent performance year.

To implement the BBA provisions, the final rule provides for payment to ACOs in two-sided risk arrangements for telehealth services furnished to prospectively assigned beneficiaries even if the otherwise applicable geographic limitations are not met, including when the beneficiary’s home is the originating site. The policy will apply to ACOs entering the BASIC track under a two-sided model and the Enhanced track when the ACO elects prospective assignment.

The proposed rule sought comment on an approach that could allow for the policy to be extended to ACOs in two-sided risk arrangements that opt for preliminary prospective assignment with retrospective reconciliation as their methodology for beneficiary assignment, leaving room for this change in future rounds of rulemaking.

The final rule allows eligible ACOs in two-sided risk arrangements within the BASIC track’s glide path and the ENHANCED track to use the existing waiver of the requirement of a three-day inpatient hospital stay prior to admission to a skilled nursing facility (SNF). The waiver will be available to eligible ACOs whether they choose prospective beneficiary assignment or preliminary prospective assignment with retrospective reconciliation.

To implement another provision of the BBA, the final rule allows ACOs operating under certain two-sided arrangements to offer beneficiaries incentive payments of up to $20 for each qualifying primary care service that the beneficiary receives, including visits to Federally Qualified Health Centers or Rural Health Clinics.

Vouchers or other in-kind incentives are also permitted, as long as they have a “reasonable connection to the beneficiary’s medical care and be preventive care items or services or advance a clinical goal for the beneficiary, including adherence to a treatment or drug regime, adherence to a follow-up care plan, or management of a chronic disease or condition.”

The final rule requires ACOs to notify beneficiaries of their participation in the ACO, as well as provide information about their options to change their primary care provider or otherwise opt out of ACO participation. Beneficiaries will be permitted to more closely align with an ACO by designating a particular practitioner as their “primary clinician,” with the responsibility to coordinate their care. For several years, CMS has sought public feedback on whether to allow ACOs to employ a beneficiary “opt-in” approach in lieu of or in addition to the standard claims-based assignment approach, but no such approach has been adopted to date.

Consistent with requirements of the BBA, the final rule modifies existing policies on the voluntary alignment of beneficiaries to ACOs by permitting beneficiaries to designate a physician (regardless of specialty) or a nurse practitioner, physician assistant, or clinical nurses specialist as their “primary clinician” responsible for coordinating their overall care.

In an effort to strengthen program integrity in MSSP, the final rule codifies a combination of policies, including:

ACOs that voluntarily terminate their participation after June 30 of a 12-month performance year will be accountable for pro-rated shared losses.

The final rule adopts new requirements for the use and adoption of certified electronic health record technology (CEHRT), including adding interoperability as a prerequisite for both new and renewing ACOs. ACOs would be required to attest that a minimum of 50 percent of participating clinicians use CEHRT.

ACOS that participate in a track or payment model within a track that is an Advanced APM under MACRA’s QPP will be required to attest to the higher of the 50 percent threshold or the CEHRT threshold required for Advanced APMs.