Néstle, Swatch Group, Rolex and Emmi among the Top 250 of the world

Zurich, 22 April 2014 - Despite a slowdown in the global economy, the world’s 250 largest consumer products companies generated sales in excess of $3.1 trillion in fiscal year 20121. This resulted in an average company size of $12.5 billion in net sales. The Swiss-based multinational Nestlé has moved into the top three of the worldwide ranking. Compared to last year, Swatch Group, Rolex and Emmi increased their standing which emphasises the strong positioning of Swiss companies. This is according to the 7th annual “Global Powers of Consumer Products” report issued by the professional services firm Deloitte.

“The turbulence in the global economy took a toll on the growth prospects for consumer products companies. In both mature markets and export-dependent economies, the industry’s overall rate of growth was much more subdued in 2012 compared with previous years,” said Howard da Silva, Consumer Business Industry Leader for Deloitte in Switzerland. “On the other hand, it is reassuring to see that profitability strengthened—despite rising prices for raw materials. Of the 224 companies that disclosed their bottom-line net profits, only 19 operated at a loss in 2012.”

After a dismal year in 2011 for manufacturers of consumer electronics, 2012 saw the sector bounce back. Electronic products accounted for five of the world’s 10 largest consumer products companies in 2012, with Samsung and Apple ranked as the top two. Consumer’s increasing desire for connected devices pushed revenues up to nearly 10 percent in this industry.

Nestlé, the world’s largest food company, moved into third place ahead of Panasonic. The Swiss multinational also secured its position as number one of the “Top 10 European consumer product companies” and maintained a commanding lead in the food, drink and tobacco sector. Other Swiss companies in the Top 250 worldwide are watchmakers Swatch Group (95) and Rolex (151) as well as dairy company Emmi (237). Compared to last year, they all increased their position in the ranking and prove the strength of Swiss companies.

Looking closer at the apparel and accessories product sector, the biggest change in 2012 was the removal of luxury goods company Richemont from the Top 250 list. Due to its expanding retail business, Richemont is no longer considered to be primarily a consumer products wholesaler. The Swiss watch manufacturers Swatch Group (5) and Rolex (9) are however still represented in the sector’s top 10.

Howard da Silva underlined the sustained importance of the watch industry for the Swiss economy: “The continuing strong global market for high-end watches, the increasing demand from emerging markets and consumer tourism provide a positive outlook for Swiss companies in this sector. We can therefore expect the overall growth story of the Swiss watch industry to continue.”

Despite a fragile global economic recovery, the Deloitte report found that well-funded investors have continued to seek merger and acquisition (M&A) opportunities that strengthen their strategic positions. In 2012, there were 1,298 deals completed by consumer products companies, up from 1,274 in 2011 and 1,117 in 2010. For 2013, 1,182 deals had been reported as of February 22, 20142. Deal activity was found to be stimulated by improved credit availability, low interest rates, rejuvenated capital markets, and, in some cases, companies’ sizable cash reserves. Private equity has also shown a renewed interest in consumer products.

“It is, perhaps, somewhat surprising that the volume of deals in the global consumer products industry has increased in recent years, given the slow tempo of the global economy. However, as concerns over economic uncertainty begin to recede, 2014 is already shaping up to be a big year for M&A activity this industry,” said Howard da Silva.

A connected consumer is a powerful consumer

Consumers today have access to a global audience and have the power to create and distribute their own media. Engaging the constantly connected consumer requires a shift from investing in brands to investing in consumers through customized experience.

Björnar Jensen, Partner at Monitor Deloitte in Switzerland, summed up: “The real challenge facing consumer product companies these days is to survive in a globally connected, consumer-driven world. In order to manage and grow profitably, companies must learn to meet consumer’s demands from any part of the world, through any channel. New approaches that must be embraced include end-to-end global supply chains, virtual market entry, direct-to-consumer channels, and more investment in consumer insights. A more connected consumer is a more powerful consumer, and that is the frontier consumer products companies now face.” 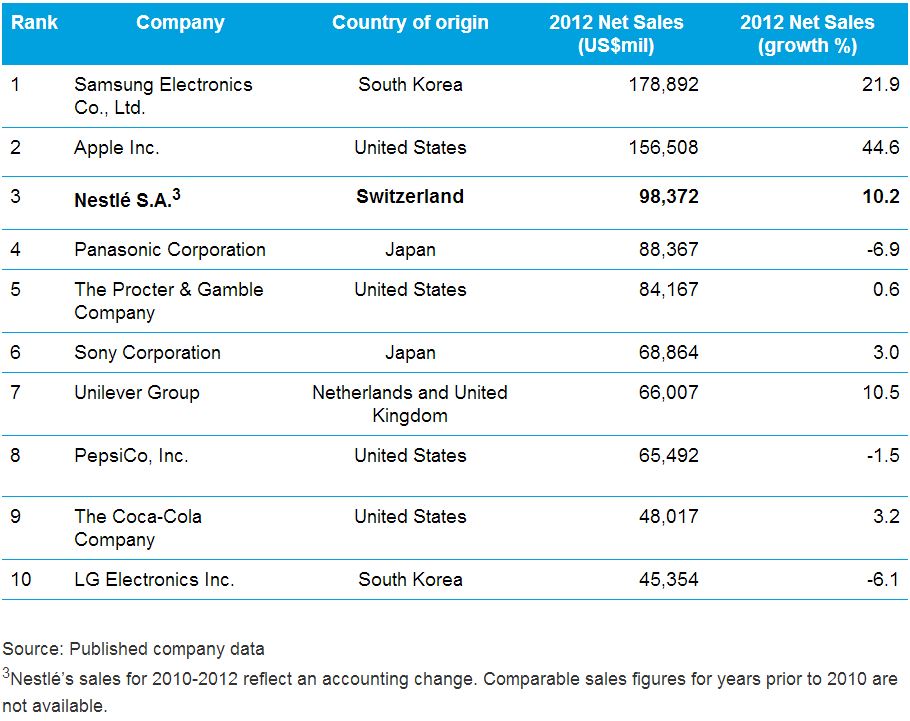 About the Deloitte Global Powers of Consumer Products report

The 7th annual Global Powers of Consumer Products report by Deloitte Touche Tohmatsu Limited (DDTL) identifies the 250 largest consumer product companies. The ranking is based on publicly available data for the fiscal year 2012. The report also provides an outlook for the global economy, an analysis of the market capitalisation of the industry, a look at M&A activity in the consumer products sector as well as a discussion of major trends affecting consumer products companies.

Deloitte is a leading accounting and consulting company in Switzerland and provides industry-specific services in the areas of audit, tax, consulting and corporate finance. With approximately 1,100 employees at six locations in Basel, Berne, Geneva, Lausanne, Lugano and Zurich (headquarters), Deloitte serves companies and institutions of all legal forms and sizes in all industry sectors. Deloitte AG is a subsidiary of Deloitte LLP, the UK member firm of Deloitte Touche Tohmatsu Limited (DTTL). DTTL member firms comprise of approximately 200,000 employees in more than 150 countries around the world.