The 22nd quarterly Deloitte survey of Swiss CFOs reveals: Of the 129 CFOs and finance directors surveyed, the number of those taking an optimistic view of the economy has declined from 80% to 41% in the last 12 months. In addition, the CFOs have lost their appetite for risk. The SNB’s abolition of the lower limit against the euro caught the CFOs off guard.

Increasing state regulation is giving Swiss CFOs cause for concern. The shortage of skilled staff, which could be exacerbated by the increasing regulation of the labor market, is also seen as a major challenge for 2015. Developments outside Switzerland are also dampening the mood. Geopolitical risks continue to be cited as a company risk and concerns about weaker export demand have also increased. The strength of the franc has again come into focus.

Of the CFOs surveyed, only 41% were optimistic about Switzerland's economic outlook – as opposed to over half in the previous quarter (53%), while in the second quarter of 2014, 75% had described themselves as optimistic.

Falling risk tolerance – even before the abolition of the lower limit

Michael Grampp, chief economist at Deloitte in Switzerland, commented on the results: “The reduced risk tolerance is particularly noteworthy: the CFOs have lost their appetite for risk. Some 68% do not wish to incur any increased risks at the moment, which is a solid 19 percentage points higher than three months ago. The fact that the SNB has abandoned the minimum exchange rate of CHF 1.20 to the euro is an additional uncertainty factor, for which CFOs were barely prepared.”

It is clear from the narrow bandwidth of exchange rate expectations in the current survey of just over EUR/CHF 1.20 that the abolition was not expected. Only three of the 129 people surveyed in the survey period in December expected an exchange rate below 1.20 in 12 months’ time. 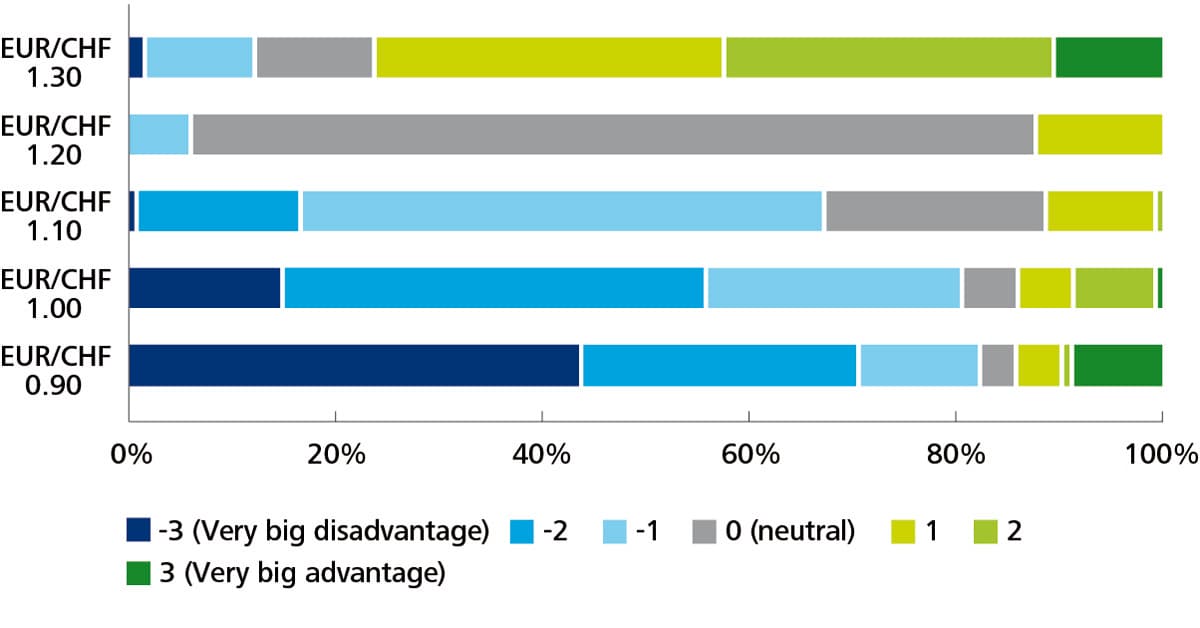 Expectations for sales and operating margins were falling, even before the abolition of the lower limit. Around 40% of CFOs expect declining margins in the next 12 months. For the first time since the end of 2012, a majority of the CFOs surveyed also expect investment to decrease. Michael Grampp adds: “The pressure on margins will continue to increase now that the lower limit has been abandoned” Companies are barely out of crisis mode, yet now they will need to focus on coming to terms with the appreciation of the franc.”

Each quarter, Deloitte Switzerland conducts a survey of chief financial officers (CFOs) and finance directors. Some 129 CFOs took part in the 22nd survey, which was carried out at the end of the fourth quarter of 2014. They represent both listed companies and large private companies from all relevant industries/segments. Deloitte conducts similar CFO surveys in more than 30 countries.

Deloitte is a leading accounting and consulting company in Switzerland and provides industry-specific services in the areas of audit, tax, consulting and corporate finance. With approximately 1,300 employees at six locations in Basel, Berne, Geneva, Lausanne, Lugano and Zurich (headquarters), Deloitte serves companies and institutions of all legal forms and sizes in all industry sectors. Deloitte AG is a subsidiary of Deloitte LLP, the UK member firm of Deloitte Touche Tohmatsu Limited (DTTL). DTTL member firms comprise of approximately 210,000 employees in more than 150 countries around the world.

Deloitte LLP and its subsidiaries are leading business advisers, providing audit, tax, consulting and corporate finance services through more than 14 000 exceptional people across the UK and Switzerland. Known as an employer of choice for innovative human resources programmes, it is dedicated to helping its clients and people excel.