Uncertainty overshadows outlook for 2016, though Swiss CFOs look to move forward and focus on growth

Almost one year after the Franc shock, Swiss CFOs remain downbeat about the outlook for the country’s economy. They do though have an increasingly brighter outlook for their own companies, as the latest edition of the quarterly Deloitte CFO Survey reveals. In 2016, the geopolitical and macroeconomic environment will remain challenging for Swiss companies, though firms are looking to embrace opportunities such as innovation, digitalisation as well as market and product growth.

Among the 123 CFOs recently surveyed, one-third (33%) rate the prospects for the Swiss economy as negative, while 24% are optimistic. However, since the drastic fall in optimism in Q1 2015, expectations have recovered over the last three quarters and the economic outlook stabilized.

When it comes to the historically low level of interest rates in Switzerland, CFOs do not foresee any change in the near future. More than half (56%) do not expect interest rates to rise until 2018 at the earliest, with another 17% thinking that they will remain unchanged until 2019. Swiss CFOs also see the EUR/CHF exchange rate remaining at the current level (1.09) in the next 12 months.

Michael Grampp, Chief Economist at Deloitte in Switzerland comments: "Expectations for the economy have stabilized, though at a negative level. CFOs seem to be more optimistic as to their company’s financial prospects in the next year. But their appetite for risk remains very limited – only one in five think that it’s a good time to take greater risk in their balance sheet. This caution is also reflected in their expectations for the EUR/CHF exchange rate. CFOs are expecting the Franc to remain at its current level (1.09 EUR/CHF) – but are using a slightly strong rate (1.07) for their budgets.” 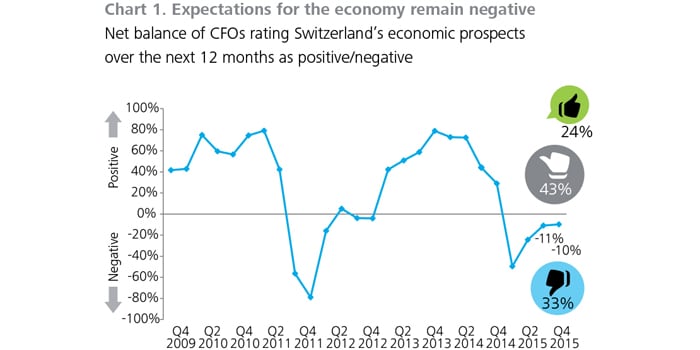 On the back of the recent terrorist attacks, currently more than two-thirds (70%) of Swiss CFOs cite geopolitical risk as the greatest risk to their company (+11pp up from Q3). Other major risks include the strength of the Swiss Franc (63%), increasing business regulation (58%) in Switzerland and the shortage of skilled professionals (58%).

Compared to the economic outlook, CFOs are more optimistic for their own company’s outlook over the next 12 months.

Almost half (45%) rate their company’s financial prospects as positive, with only 20% rating them as negative. This is a marked improvement compared to Q3.

CFOs are similarly optimistic about growth in revenues, and there is a greater willingness to increase capital expenditure as well as number of employees. 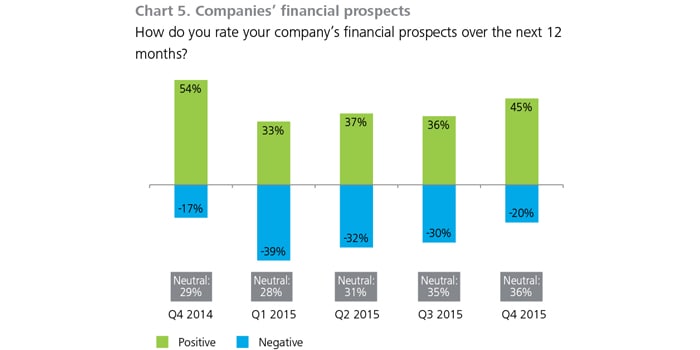 “Swiss CFOs’ responses here may indicate an increased inclination to achieve growth targets through greater investment and higher spending. However, they also may suggest that many companies have already made substantial cuts, leaving little scope for further savings,” says Michael Grampp.

He adds, “All in all, we are observing that growth is a key priority for Swiss companies at the moment. After a tumultuous 2015, companies are predominantly looking to rely on their own strengths to ride out the challenges. One of the key opportunities cited by CFOs for 2016 is digitalisation and innovation. In the past year, we’ve observed a shift away from innovation being a challenge to actually being a stand-out factor.” Next to digitalisation and innovation, Swiss companies frequently refer to their competiveness, the quality of their products and services, as well as corporate strategy as opportunities for the coming year.

Not surprisingly, around one quarter of the surveyed CFOs cite the strong Swiss Franc as the main challenge for 2016. The interest rate environment, shortage of skilled professionals and business regulation are additional causes for concern. More than one-third of CFOs also mention the problems caused by pressure on prices, costs and margins.

Each quarter, Deloitte in Switzerland conducts a survey amongst Chief Financial Officers (CFOs) and Group Financial Directors. The survey gauges their attitudes towards to outlook for business, financing, risk and strategies, and identifies trends and key themes in the Swiss corporate sector. The Q4 2015 edition was conducted between 19 November and 14 December 2015, with a total of 123 CFOs participating. They represent both listed companies and large private companies from all relevant industries. The CFO Survey is the only of its kind in Switzerland. Deloitte conducts similar CFO surveys in more than 30 countries.