For the first time since the floor on the franc exchange rate was abandoned, more than half of Switzerland’s CFOs are optimistic about their companies' financial performance. This is the conclusion of the autumn CFO Survey from Deloitte for Q3 2016. However, the economic environment remains affected by external risks. The uncertain climate of negative interest rates is increasingly concerning to companies. Nearly half are currently feeling adverse effects in the form of insufficient investment opportunities, increased costs for savings capital and implications for pension funds.

Still, despite uncertainty in the form of a strong franc, international interest rate trends and the strained relationship between Switzerland and the EU, more than half (53% in Q3 vs. 49% in Q2) of the 111 Swiss CFOs surveyed see their company’s financial prospects as positive over the next 12 months. Only a small portion (12%; in Q2 it was 20%) are pessimistic. Both figures reflect the most positive (or least negative) results since the franc shock in January 2015. 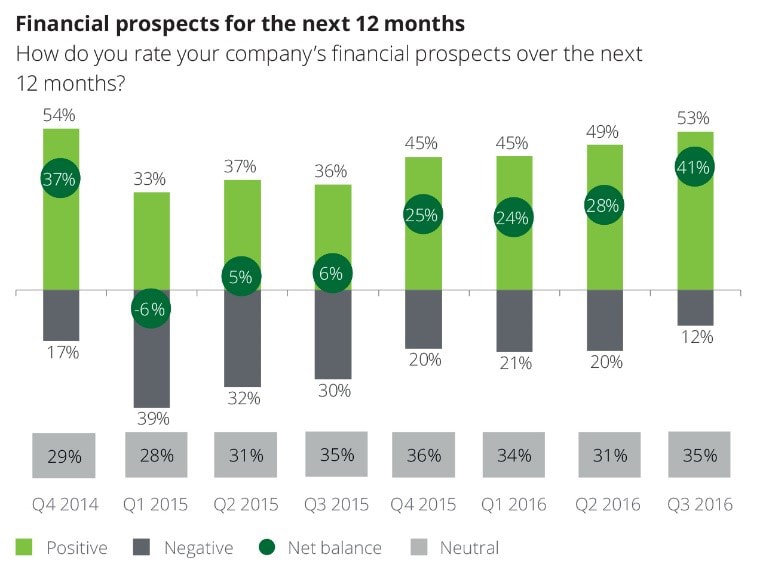 This confidence is also supported by the positive economic outlook. Economic expectations among Swiss CFOs have continued to rise this autumn. 45% of CFOs polled currently see economic prospects as positive, compared to just 12% who are negative. Contrast to the summer survey, this represents a renewed upswing in optimism of 14 percentage points.

“The economic prospects for Swiss companies have once again improved slightly over recent months. It seems CFOs are better prepared for long-term external risks and are addressing them with a degree of routine,” says Michael Grampp, Chief Economist at Deloitte in Switzerland. “But optimistic forecasts should not hide the fact that there are still major challenges ahead for Swiss companies.”

Increased optimism can also be seen in corporate data expectations. Almost two-thirds of CFOs polled (64%) expect revenues to improve over the next 12 months. Despite slightly increased confidence in terms of cash flow and margins, margin pressure remains very much present in Switzerland. More companies still expect lower margins (31%) rather than higher margins (24%).

Yet even with the prevailing margin pressure, CFOs are generally confident with regard to upcoming investment over the next 12 months. In terms of replacement and new investment, as well as headcount, 40% of CFOs are expecting increases.

When it comes to investment, the debt financing environment for Swiss companies is currently attractive thanks to the historically low interest rates. It is no coincidence that over 70% of CFOs surveyed see bank loans as the best source of financing for Swiss companies. Still, the results for Q3 indicate that demand for credit will continue to be modest over the next 12 months. The main reasons for this are the ongoing aversion to additional balance sheet risk and the uncertain effects of negative interest rates.

“If a company has sufficient cash reserves to finance its investment, then self-financing may be more attractive than taking on additional risk in the form of a loan,” comments Dennis Brandes, Senior Economic Analyst at Deloitte in Switzerland. “Negative interest rates may become a real sword of Damocles for some companies. The resulting uncertainty is likely to continue indefinitely, due to the current monetary policy environment restricting the options for the Swiss National Bank.

A majority of companies (61%) are currently reporting effects from negative interest rates. Almost half of those companies (48%) are feeling the negative effects compared to just 13% experiencing positive effects. The negative effects are numerous, ranging from increased costs or (possible) negative interest rates on savings capital, to insufficient investment opportunities and adverse implications for the pension fund. The only positive effect, from the perspective of CFOs, is the low rates for borrowing. 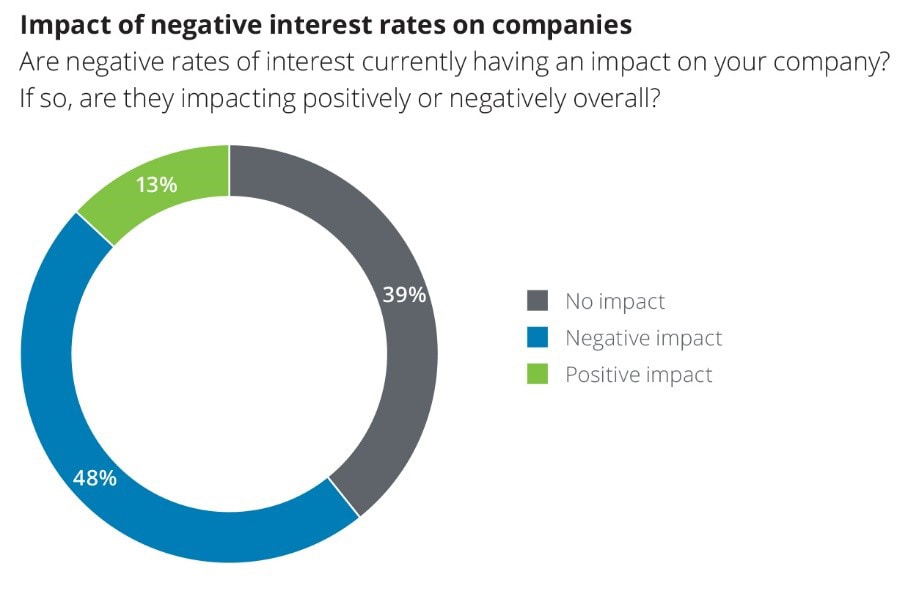 Unlike the optimistic prospects for their own company’s, uncertainty among CFOs regarding the overall economic climate is still divided. Nearly two-thirds of the CFOs (63%) currently regard the uncertainty in the economic and financial environment as high. This large majority, however, has been declining steadily since its peak of 81% following the franc shock. Even other emerging factors of uncertainty, such as the implementation of Brexit, have not fundamentally changed outlook.

Higher growth rates back on the horizon

Each quarter, Deloitte in Switzerland conducts a survey amongst Chief Financial Officers (CFOs) and Group Financial Directors. The survey gauges their attitudes towards to outlook for business, financing, risk and strategies, and identifies trends and key themes in the Swiss corporate sector. The Q3 2016 edition was conducted between 29 August and 21 September 2016, with a total of 111 CFOs participating. They represent both listed companies and large private companies from all relevant industries. The CFO Survey is the only of its kind in Switzerland.

Deloitte is a leading accounting and consulting company in Switzerland and provides industry-specific services in the areas of Audit & Risk Advisory, Consulting, Financial Advisory and Tax & Legal. With nearly 1,700 employees at six locations in Basel, Berne, Geneva, Lausanne, Lugano and Zurich (headquarters), Deloitte serves companies and institutions of all legal forms and sizes in all industry sectors. Deloitte AG is a subsidiary of Deloitte LLP, the UK member firm of Deloitte Touche Tohmatsu Limited (DTTL). DTTL member firms comprise of over 225,000 employees in more than 150 countries.