IT budgets on the rise, as Swiss CIOs look to drive innovation, but also reduce costs

In the wake of the technological revolution, the CIO should be a key strategic driver of a company. Yet the majority of Swiss CIOs feel that they do not have enough say in strategic matters and too much focus on the day-to-day IT business. Deloitte’s CIO Survey 2015 also shows that IT budgets have increased significantly over the last twelve months. However, Swiss CIOs also have to juggle disparate priorities: cost reduction and innovation.

The IT budgets of the surveyed Swiss companies have grown significantly in the last twelve months, continuing a trend observed since 2013. 53% of Swiss CIOs reported a budget increase for 2015 (and 25% a decrease and 22% no change). This percentage is significantly higher than in 2013 and 2014. This upwards trend reflects the continued economic recovery as well as the rising awareness of the strategic importance of IT. The number of growing budgets in Switzerland is also higher than the global average (48%).

Even as IT budgets are on the rise, cost reduction remains on top of CIOs’ agendas. When questioned about their top business priorities for the next year, 54% of Swiss CIOs stated that reducing operational and/or product costs was on the top of their lists. Cost reduction was cited in Switzerland more frequently than anywhere else in the global survey. Just as high on their business priorities list was creating new products and services, with 54% of Swiss CIOs naming innovation as a priority.

Michael MacNicholas, Director in Deloitte’s Technology practice in Switzerland, said: “Prioritizing both innovation and cost reduction may seem paradoxical at first glance, but innovation can also be a source of cost reduction in the mid term. Our survey though does show that CIOs are operating under a number of disparate objectives. We see IT budgets increasing, but cost reduction remaining a key strategy. This could be due to a number of factors, for example the cost consciousness that Swiss businesses have adopted since the Franc shock. But it could also reflect the growing strategic importance of IT, with budgets increasing even in the face of pressures elsewhere in the company.”

CIOs’ technology priorities also line up with the cost and innovation focus. The most named technology strategies for the next twelve months are: Reducing IT costs and driving efficiency (45%), driving digital innovation (43%) and developing new products and services (41%). All of these objectives are rated more highly in Switzerland than globally.

Click on the chart below to learn more about CIO's technology priorities for the next 12 months. 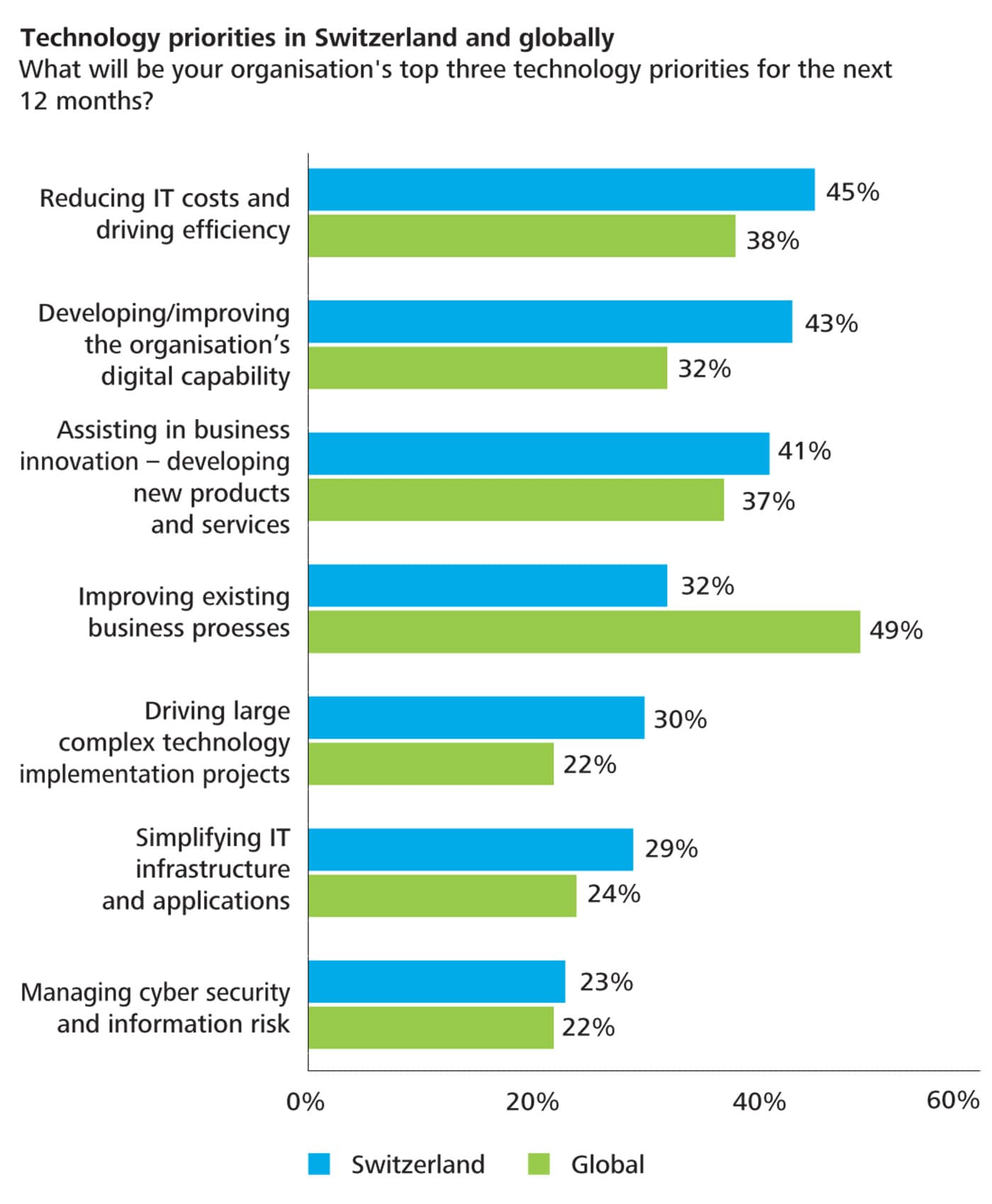 When it comes to their role in the organization, Swiss CIOs state that they would like to be more involved on the strategic level. Swiss CIOs would ideally spend less time as operator (37% current vs. 24% ideal) and more as strategist (18% current vs. 27% ideal).

Two thirds (66%) of Swiss CIOs are either not involved in or are just implementers of the business strategy.

This is a lower number than the global average (56%). Similarly, Switzerland has a smaller proportion of technology leaders currently acting as either initiator or co-leader of strategic development (32% vs. 42% globally). There is a big gap between the actual role of Swiss CIOs and what they ideally would be: 73% state that they’d like to be co-leaders versus 18% who actually are.

Michael MacNicholas commented, “We observe a desire to shift from a delivery-focused ‘keep the lights on’ IT leadership role to more strategic interactions with the business. However, are Swiss CIOs sure of what this may mean for their work? If reporting directly to the CEO, CIOs have to be ready to discuss strategy rather than operations. This asks for a different skill set. They have to devote time to really getting to know the business and being ready to make an executive level contribution, rather than just an operational one”.

Click on the chart below to learn more about the current and desired role of CIOs in business strategy formation. 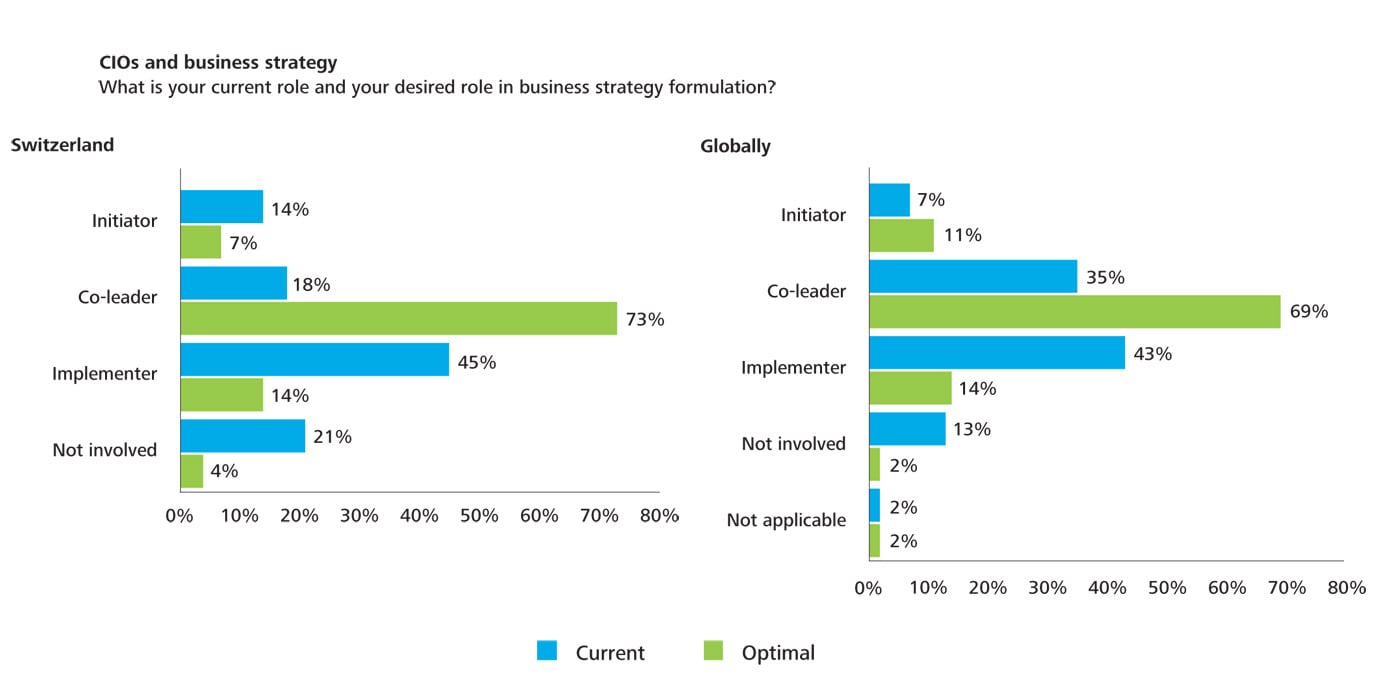 About the Deloitte CIO Survey

The Deloitte CIO Survey Switzerland is part of the firm’s Global CIO Survey, which was conducted amongst more than 1,200 CIOs in 43 countries. In Switzerland, 56 CIOs and IT leaders were surveyed between May and August 2015. The participants cover a wide spread of industries and company sizes, so that the sample can be used as a proxy for the Swiss corporate IT landscape.

The full survey results, including country-by-country breakdowns and previous surveys are available online.