Europe’s chief financial officers (CFOs) are reporting higher levels of optimism, increased risk appetite and a shift towards more expansionary business strategies, according to Deloitte’s latest European CFO Survey. Deloitte has collated the results of surveys run by its member firms in 19 European countries for the Q1 2017 Survey, giving the views of 1,580 CFOs (see the Deloitte CFO Survey Switzerland for more Swiss specifics).

Optimism and outlook for revenue growth improves
When asked how they feel about the financial prospects for their company compared to three to six months ago, 38% of CFOs say they are more optimistic, compared to 26% in the Q3 2016 survey. Just 13% say they are less optimistic, down from 25%. Turkey is the only country where optimism has fallen in the past six months. Switzerland is slightly below average, with one third of Swiss CFOs (32%) asserting a more optimistic view for the financial prospects of their company.

CFOs also remain optimistic about their company revenues: 69% say they expect these to grow in the next twelve months, up from 65% six months ago. Confidence in revenue growth is highest in Sweden, where 86% of CFOs expect growth, and lowest in Turkey where 53% expect growth. At 66% expecting increased revenues, Swiss CFOs are around the European average.

Uncertainty persists, though appetite for risk increases
61% of CFOs say there is a high level of uncertainty facing their business, down from 67% six months ago. Perceptions of uncertainty are highest in the UK and Germany; in both countries, 85% say they face high uncertainty, with Greece at third place (82%). 69% of surveyed CFOs in Switzerland rate uncertainty as high. Traditionally risk-weary Swiss CFOS seem to be closer to their neighbouring countries when it comes to uncertainty, and quite far away from their Nordic counterparts: Just 19% of CFOs in Norway say they face high uncertainty, the lowest across all countries and followed by Finland (25%) and Denmark (30%).

“Recent political shifts and upcoming elections across Europe have seen uncertainty persist among CFOs. But that has not dented their optimism, their willingness to take on risk and the confidence they have in their companies’ performance,” said Michael Grampp, European CFO Survey Lead and Chief Economist at Deloitte in Switzerland. “This improved optimism comes on the back of strengthening growth in Europe. Europe’s recovery gained traction in the final quarter of 2016 and was further boosted in early 2017 with a number of economic indicators suggesting resilience in the face of political uncertainty. Also, many anticipated risks have not materialised or have not created the negative shock some had feared, and geopolitical and economic risks are becoming less pressing.”

Improved outlook for hiring
34% of European CFOs say their company is likely to increase employee numbers in the next year, up from 32% six months ago. Only 22% expect the number of employee to decrease, down from 27%. Again the UK sees the lowest proportion of optimistic CFOs, with just 12% expecting hiring to increase and 40% to decrease. Irish CFOs remain the most optimistic with 67% expecting an increase, and only 4% a decrease. Switzerland falls between that, with 40% expecting an increase and 23% a decrease.

CFOs were also asked what measures would ensure the future success of the EU. 47% would prefer to see a “multi-speed” approach, with further integration among certain member states. 38% favour further integration for the EU as a whole. Only 5% say that no change is the best option for the EU. Support for EU-wide integration is strongest in Greece, where 80% of CFOs back this option, followed by Spain (68%) and Portugal (66%). On the other hand, 69% of CFOs in Germany prefer “multi-speed” integration, followed by Belgium (65%), Switzerland, the Netherlands and Austria (all 57%).

Michael Grampp stated, “That CFOs assign a 33% chance to another member leaving the EU in the next five years shows that this is an unlikely, but not insignificant outcome. There is also a big divide between countries on EU integration, with those in the southern European countries most in favour of further und deeper integration but those in the northern countries leaning towards a ‘multi-speed’ future.” 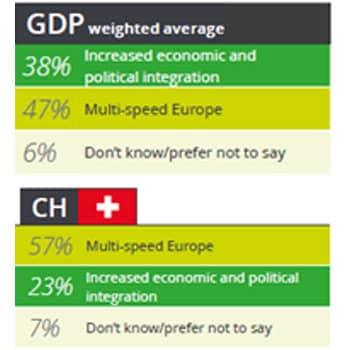 About the European Deloitte CFO Survey
This is the 5th biannual Deloitte European CFO Survey. The Survey collates the findings of surveys conducted by Deloitte member firms in Austria, Belgium, Denmark, Finland, France, Germany, Greece, Ireland, Italy, the Netherlands, Norway, Poland, Portugal, Spain, Sweden, Switzerland, Turkey and the United Kingdom. In total, 1,580 CFOs took part in these surveys conducted between February and March 2017. Percentages used in the report are weighted by GDP to provide accurate comparisons, taking into account individual countries’ GDPs in relation to the total GDP of the 19 participating countries.

The full survey results, including country-by-country breakdowns, and previous surveys are available to view at www.deloitteresearchemea.com

About Deloitte in Switzerland
Deloitte is a leading accounting and consulting company in Switzerland and provides industry-specific services in the areas of Audit & Risk Advisory, Consulting, Financial Advisory and Tax & Legal. With nearly 1,700 employees at six locations in Basel, Berne, Geneva, Lausanne, Lugano and Zurich (headquarters), Deloitte serves companies and institutions of all legal forms and sizes in all industry sectors. Deloitte AG is a subsidiary of Deloitte LLP, the UK member firm of Deloitte Touche Tohmatsu Limited (DTTL). DTTL member firms comprise of over 245,000 employees in more than 150 countries.

Note to editors
In this news release, Deloitte refers to one or more of Deloitte Touche Tohmatsu Limited (“DTTL”), a UK private company limited by guarantee, whose member firms are legally separate and independent entities. Please see www.deloitte.com/ch/about for a detailed description of the legal structure of DTTL and its member firms.
Deloitte AG is a subsidiary of Deloitte LLP, the United Kingdom member firm of DTTL. Deloitte AG is an audit firm recognised and supervised by the Federal Audit Oversight Authority (FAOA) and the Swiss Financial Market Supervisory Authority (FINMA).