Digital payment in Swiss retail: Majority of customers already use self-checkout in supermarket, mobile payment on the rise

Paying by smartphone is becoming more and more fashionable in Swiss retail: 17% of Swiss consumers already pay by smartphone and almost as many want to try it out soon. Twint, Apple Pay and Co. still account for only a low share of retail sales, though. The new study conducted by professional services firm Deloitte “Goodbye wallet, hello smartphone?” also shows that the majority of Swiss consumers scan their products themselves, using automated systems to pay for their shopping. Over two thirds of surveyed consumers use self-checkouts, and more than one fifth even every time they visit a supermarket.

New digital technologies have led to customers of Migros, Coop, Ikea and co. shopping differently today compared to ten years ago. Of course, more and more people are buying online: since 2010, the Swiss retail sector has seen online sales increase by almost half. Almost nobody shops without going online any more: according to research conducted by Deloitte in the summer, 83% of Swiss consumers use their smartphone or laptop when shopping, including before, during and after visits to stores. The boundaries between online and offline shopping are disappearing.

Digitisation has also transformed consumers’ choice of payment methods. In 2000, around two thirds of sales in physical retail outlets in Switzerland involved payment in cash. By 2016, this had fallen to just under half. Although Swiss consumers still pay cash for their retail purchases far more frequently than those in the USA or Sweden - which are already heading towards a cashless economy –, the global and also Swiss trend is steering away from cash and towards digital payment methods.

Paying by app on the rise

Consumers in Switzerland have been able to pay directly by smartphone via apps in more and more stores in recent years. According to the latest Deloitte research, already 17% of Swiss consumers use their smartphone to pay for purchases by at least occasionally.

Digital payment in Swiss retail: Majority of customers already use self-checkout in supermarket, mobile payment on the rise 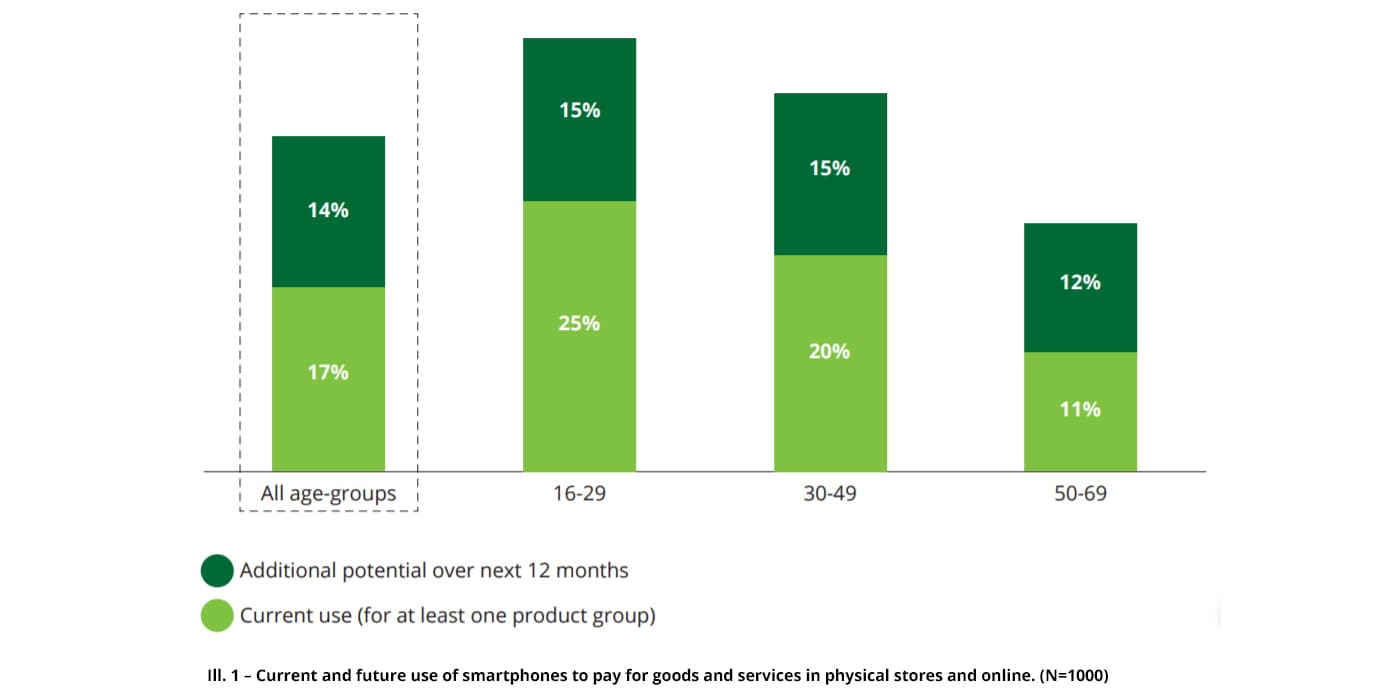 “This figure may appear relatively high, especially considering that Swiss transaction volumes using mobile payment systems still account for less than 1% of all transactions. While a considerable proportion of Swiss consumers appear to have downloaded mobile payment apps to their phones, only a small proportion are currently using them frequently,” explains Konstantin von Radowitz, Head of Consumer & Industrial Products at Deloitte Switzerland.

Use expected to double

In addition to the 17% who already pay by smartphone, 14% of those interviewed stated that they would probably switch to mobile payment over the next 12 months. Just under three quarters (73%) of mobile payment users use third-party providers such as Twint, Apple or Samsung. More and more companies have also included a payment function in their own apps and combine it with bonus programmes and special offers: almost half of consumers (46%) use such apps offered by brands.

Of the third-party providers, Twint – used by 40% of mobile payment users – is just nudging out Apple Pay (33%) at the moment. While Apple Pay and Samsung Pay function like a virtual credit card and transfer data using near field communication (NFC) technology, Twint does not require a credit card, just a bank account. “The direct connection without the need for a credit card as well as the function for making payments and requesting money from private contacts are clear pros for Twint. On the other hand, Apple has a clear convenience advantage thanks to the NFC technology, and Apple Pay and Samsung Pay can also be used internationally,” von Radowitz explains.

Digital technology is also changing the way in which customers pay for the products chosen in the store: automated scanning and checkout systems are on the rise. Through self-checkout, the customer becomes the cashier and the supermarket thus outsources the payment process. 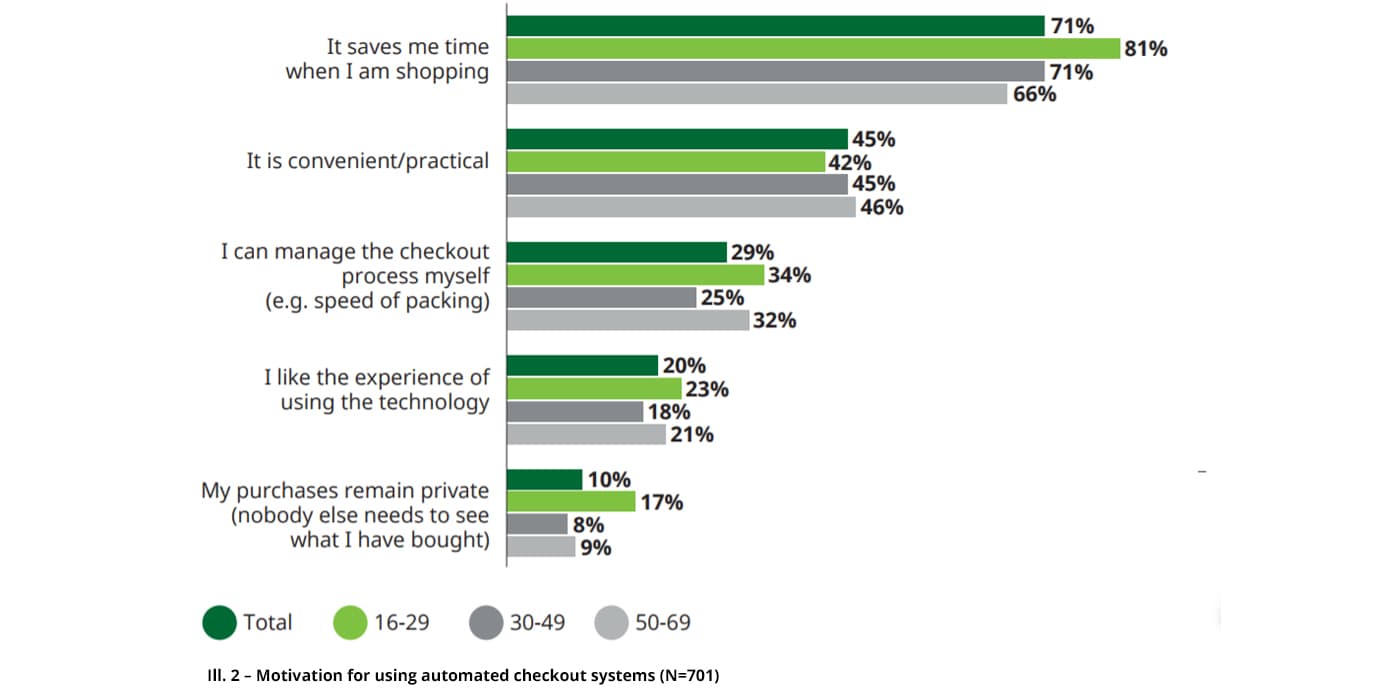 “These figures are very high, clearly illustrating the popularity of automated checkouts in Switzerland,” says Karine Szegedi, Partner in the Consumer & Industrial Products division at Deloitte Switzerland. “When shopping, customers feel good managing the checkout process themselves. They have the impression that they’re saving time – which isn’t always the case in reality, though.”
Such checkout systems lead to greater customer satisfaction, the better use of space and cost savings for the retailers. “But there’s still potential for improving ease of use, security and deployment of staff, in particular re-training checkout assistants as customer advisers,” Szegedi adds.

Supermarkets without tills will become reality

For consumers, what’s key is how user friendly, secure and efficient the entire scanning and payment process is. In the long term, banks could even be excluded from the payment process if the large technology companies start offering their own bank accounts. Amazon has already opened stores in the USA which have no payment infrastructure. The customer scans and pays for the goods with their own smartphone via the store app. “The retailer Alibaba in China is already a lot further and is testing payment based on facial recognition. The store of tomorrow will connect customers, employees and the offer with each other on various levels using combined technologies,” says von Radowitz, taking a look at the future of the retail world.

You can find our study “Goodbye wallet, hello smartphone?” on our website. Also have a look at our video for a summary of the main results.

Konstantin is the Managing Partner of Deloitte Switzerland’s Financial Advisory practice and a member of the Swiss Executive team. He has nearly 25 years of experience focused on serving industrial cl... More

Michael is leading the external communications team and contact for media representatives from all parts of Switzerland. He started his career as a journalist and has over 15 years of experience in co... More

The extent and potential of digital payment systems in Swiss retail

The impact of digital technology on consumer behaviour in Swiss retail