ENEOS Corporation, Hokkaido Electric Power Co., Inc., JFE Engineering Corporation, Hokkaido Electric Power Network, Inc., and Deloitte Tohmatsu Consulting LLC announced that the study for the development of a large-scale green hydrogen supply chain in Hokkaido proposed by the five companies has been selected by the New Energy and Industrial Technology Development Organization (NEDO) for NEDO’s “Hydrogen Production and Utilization Potential Study” under the theme of “Regional Hydrogen Utilization Technology Development” in the “Development of Technologies for Realizing a Hydrogen Society” project.

The five companies will conduct this study to build a large-scale green hydrogen supply chain in Hokkaido. Specifically, the study will examine the feasibility of building a domestic green hydrogen supply chain by introducing a water electrolysis unit (of around 100 MW) that produces green hydrogen on a scale of approximately 10,000 tons (enough to refuel fuel cell vehicles approximately two million times) annually—the largest scale in Japan—at the Tomakomai area in Hokkaido. At the same time, the study will also consider the utilization of excess electricity and for its adjustment capabilities.

In addition, the adoption of “a next-generation water electrolysis energy management system” for the electric grid control system will also be examined. This system seeks to reduce the cost of producing hydrogen by effectively using excess electricity from renewable energy in Hokkaido while discerning factors such as electricity market prices and the state of demand and supply to optimally control the water electrolysis unit and reused storage batteries.

After this study, a technological verification with actual units will be conducted with completion by 2030. The aim is the implementation into society and commercialization of a domestic green hydrogen supply chain. In the future, a business for supplying green hydrogen outside Hokkaido will also be considered depending on the increase in power generation capabilities accompanying the expansion of offshore wind power implementation.

The five companies will use their respective expertise and contribute toward the realization of a carbon neutral society and increasing the rate of self-sufficiency in energy through the social implementation of Japan’s largest scale green hydrogen supply chain with price competitiveness and achieving carbon neutrality in industries and transportation fields where electrification is difficult.

Overview of this studySelected theme

Concept of a large-scale green hydrogen supply chain in Hokkaido 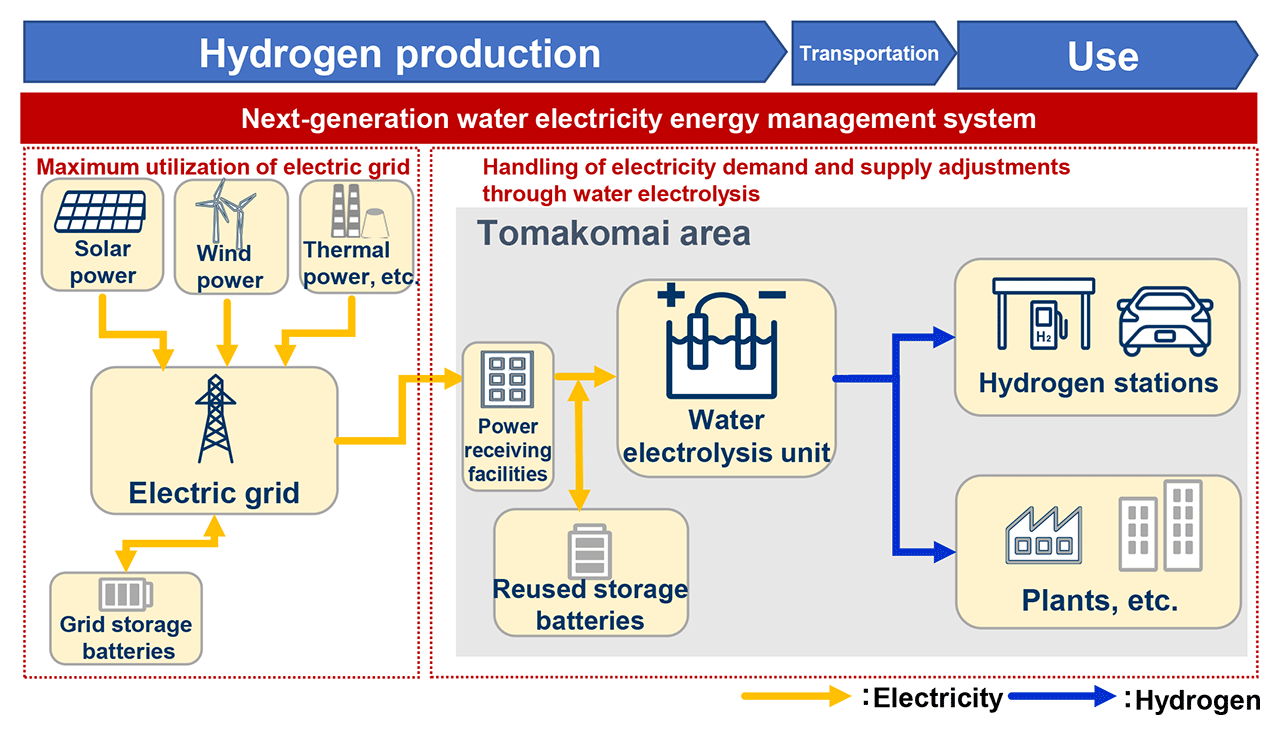