The Future of Energy blog series

Not being able to secure energy supply at all times can have a substantial impact on lives. This became apparent when a large-scale power outage in Texas, during the Texas Freeze in February, lead to 150 deaths and trapped millions of people in freezing cold and darkness. Besides, when security of supply is under pressure, energy prices will rise and may affect affordability. Research organization TNO calculated that 7% of Dutch Households will experience ‘Energy Poverty’ caused by increased energy prices. Energy Poverty means that households must spend up to 20% of their income on gas and electricity, having major impact on their financial situation.1

With the energy transition at full speed and the phasing out of Dutch natural gas, our national security of supply is under increasing pressure leading to higher dependency on import of energy. While only 15% of our energy consumption was imported in 2016, 5 years later this increased to 65%, calculated by Energiebeheer Nederland (EBN). And this dependence will increase even further up to 80% in the coming years as can be seen in figure 1.

The consequences of this dependency are already felt everywhere in our economy. A combination of factors is pushing up the price for natural gas. Now that production in Groningen is phasing out, supply of natural gas must, to a large extent, come from gas storages. These are controlled by private parties such as Gazprom. The filling rate of those gas storages is now 58%, instead of the usual 80%. At the storage of Gazprom in the Bergermeer this is as low as 27%.2 On top of that, the Netherlands hardly has any long-term supply contracts with providers, unlike other import-dependent countries. We are already experiencing the capricious spot market, dominated by the same Gazprom.

In the electricity system the same concerns play a role, only with a different dynamic. Although we still exported electricity last year, according to Tennet, we will become a net importer of electricity from 2025 onwards. In addition, the ‘Planbureau voor de Leefomgeving’ (PLB) calculates that by 2030 we will be more than 70% dependent on sun and wind energy.

For supply and demand to match, international electricity connections are important. But this winter, the three most important connections (Britned, Nordned and Cobra) suddenly experienced technical problems at the same time. For the time being, there is enough back-up capacity (especially from gas-fired power plants). In recent years, however, we have already seen a lot of capacity closing down. In order to guarantee security of supply, back-up capacity will have to be paid for. An electricity market in which the price is based solely on the marginal costs of the marginal producer therefore no longer seems to fit in with a system where 80% of production will soon have no, or hardly any, marginal costs, such as electricity from the sun and wind.

In the future, the security of supply of hydrogen will also become increasingly important. The German government's hydrogen strategy even predicts that 80% of hydrogen will be imported via pipelines or via ships, and the same dynamic will become visible in the Netherlands. As a result, large-scale storage of hydrogen in salt caverns will play an important role in guaranteeing this security of supply. For the time being, it seems that this responsibility will lie with market parties. As could be derived from graph 1, domestic hydrogen production can replace demand for imported gas hitting two birds with one stone; decreasing energy dependency while simultaneously cutting emissions. 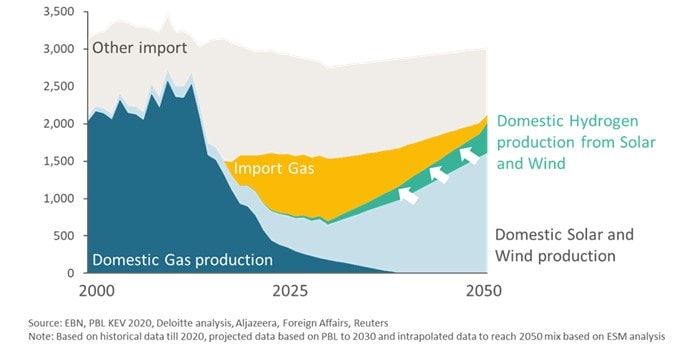 The consequences of import dependency are visible in our oil imports. The idea that the market is responsible for security of supply counts on the idea that a high price causes a response in the market. But are you driving a kilometer less now that the price of petrol is going up? This is the same for companies, which often do not want, and often are unable, to adapt their production pattern to the price and availability of energy.

The liberalization of the energy market increasingly places the responsibility for security of supply on market players, making us dependent on the willingness of these market companies to invest. At the same time, these parties have interests in the spot market. Therefore, domestic production of natural gas, hydrogen, and electricity, especially offshore, will need to be encouraged. Governments could also give guarantees for constructing storages to ensure actual progress. In the meantime, companies can increase their resilience by signing long-term contracts.

While the energy transition continues at full speed, it is essential that the ‘trias energetica’, sustainability, affordability, security of energy supply, remain in balance. Especially security of supply does not receive the attention it deserves. This is not only a task for the government, but also for market parties and energy users.

Would you like to stay up-to-date on the energy transition and be the first to receive our Future of Energy insights? Fill in the form below.

This blog was originally published in the Financieel Dagblad as an op-ed by strategy manager ‘Energy & Resources’ Oscar Kraan from Monitor Deloitte. ‘Toenemende zorgen over gastoevoer naar Nederland’, FD 3 August. It has been updated with more recent information.

Oscar is a Manager at Monitor Deloitte, the strategy practice of Deloitte Consulting in the Netherlands. He joined the firm November 2018 and since then helped various clients in the energy sector nav... More

A Future of Energy point of view on hydrogen