The 20 highest revenue generating clubs in world football earned €9.2bn in the 2021/22 season, according to the 26th edition of the Football Money League published by Deloitte’s Sports Business Group. The year-on-year increase of 13% comes as matchday spending rebounded, rising from €111m to €1.4bn, following the return of fans to stadia as COVID-19 restrictions were lifted.

Commercial revenues rose by 8% year-on-year (from €3.5bn to €3.8bn) but the impact of this was offset by an 11% (€485m) fall in broadcast revenue following a high comparative 2020/21 season, which benefited from deferrals of broadcast revenue relating to postponed 2019/20 matches.

For the first time in the publication’s history, more than half of the Money League now herald from a single country, with Premier League clubs making up eleven of the top-20. Five of the Premier League’s ‘big six’ clubs reported revenue increases of 15% or more in Euro terms (a total increase of €226m) as new commercial partnerships began and non-matchday events such as concerts and stadium tours returned.*

Tim Bridge, lead partner in Deloitte’s Sports Business Group, said: “For the first time, Premier League clubs fill the lion’s share of positions in Deloitte’s Football Money League. The question now is whether other leagues can close the gap, likely by driving the value of future international media rights, or if the Premier League will be virtually untouchable, in revenue terms.

“The Premier League reported a significant increase in its international media rights value during its most recent rights sale process. It continues to appeal to millions of global followers and its member clubs have a greater revenue advantage over international rivals.

“Commercial partner, fan and investor interest in the Premier League appears higher than ever before. While this suggests optimism for further growth, continued calls for greater distribution of the financial wealth of English clubs across the football system and the impact of a cost-of-living crisis makes it all the more important for the game’s stakeholders to keep a clear focus on their responsibility as stewards of leading clubs.”

Following a rapid rise through the rankings, with the club having only broken into the top five for the first time in 2015/16, Manchester City retained its position at the top of the Money League. The club posted a Premier League record commercial revenue of €373m in 2021/22, a growth of €65m from the previous season.

Liverpool was the biggest mover in this year’s edition of the Money League, rising four places (from seventh to third) to achieve its highest-ever position. The Reds have overtaken Manchester United in the rankings for the first time, on the back of a run to the UEFA Champions League Final 2022 which generated additional broadcast revenue. Liverpool was also only one of five clubs to report over €100m in matchday revenue, which was the first time the club had done so, as fans returned to football stadia.

Elsewhere, for the first time since 2018/19, a new club entered the Money League top ten, with Arsenal rising from eleventh to tenth position, primarily due to the significant level of matchday revenue that continues to be generated. Leeds United (eighteenth) also feature in the Money League top-20 for the first time since the 2002/03 season and Newcastle re-enter the top-twenty in twentieth, with these clubs reporting higher matchday and commercial revenues compared to many other English clubs (who are also in receipt of significant Premier League distributions).

Outside of the Premier League, FC Barcelona and Real Madrid have yet to recover revenue to their pre-pandemic levels, with the clubs’ revenues down €203m and €43m respectively from 2018/19.

FC Barcelona reported one of the sharpest falls in the rankings, with the club falling to seventh place from fourth. This was primarily due to a 13% decline in broadcast revenues, partially attributed to underperformance in UEFA club competitions in comparison to the previous year. Meanwhile Real Madrid saw a 40% decline in matchday revenue when compared to 2018/19, predominantly due to ongoing COVID-restrictions in the 2021/22 season.

When considering the top 30, there are 16 English clubs, representing 80% of all clubs in the Premier League. The remainder of the top 30 clubs include five clubs from La Liga, three from both Serie A and the Bundesliga and one from Ligue 1, all of whom competed in UEFA club competitions in 2021/22.

Sam Boor, director in Deloitte’s Sports Business Group, adds: “The Premier League’s financial superiority is unlikely to be challenged in the coming seasons. This is particularly apparent at a time when these clubs continue to attract international investment which often, in the best examples, encourages a focus on profitability, as well as on-pitch success. It’s now likely a case of not if, but when, all 20 Premier League clubs will appear in the Money League top 30.”

For the first time, Deloitte’s Football Money League also reported on revenues generated from the women’s teams at Money League clubs, with clubs reporting average revenues of €2.4m attributable to the women’s sides in the 2021/22 season.**

FC Barcelona generated the highest revenue out of all 2023 Money League clubs from its women’s team. FC Barcelona Femení, 2021 UEFA Women’s Champions League winners and 2022 finalists, generated revenue of €7.7m in the 2021/22 season.

Bridge concludes: “The women’s professional game is still near the start of its journey and revenues reported by top clubs at this early-stage hint at the significant value women’s sides will generate in future seasons. Coupled with long-term and growth-focused decision making, we expect that the development of industry data analysing women’s sport will also support success in the women’s game. This will enable clubs and leagues to clearly demonstrate the value of their women's sides and the fan base that they're attracting.”

Notes to the editor

*The five clubs include Chelsea, Liverpool, Manchester City, Manchester United and Tottenham Hotspur.
** Of the 17 clubs with a current top-flight women’s team, 15 provided information to Deloitte pertaining to the financial operations of their teams in 2021/22. These clubs reported average revenues of €2.4m for their women’s side. 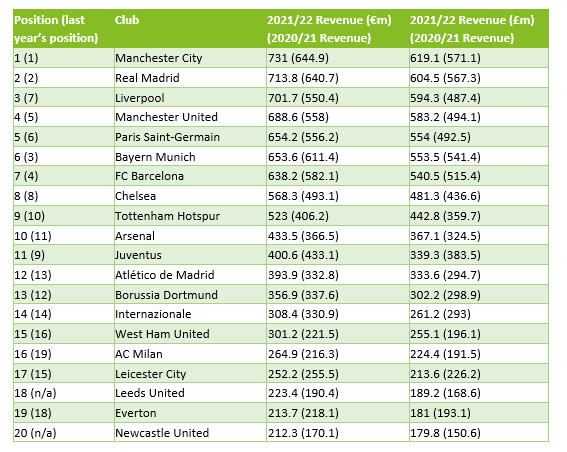 There are a number of metrics, both financial and non-financial, that can be used to compare clubs, including attendances, worldwide fan base, social media following and on-pitch performance. In the Money League we record clubs’ ability to generate revenue from matchday, broadcast rights and commercial sources.

Revenue excludes player transfer fees, VAT and other sales related taxes. In a few cases, we have made adjustments to total revenue figures to enable, in our view, a more meaningful comparison of the football business on a club by club basis.

Information is derived from annual financial statements or information provided directly from individual clubs. Based on the information made available to us in respect of each club, to the extent possible, we have split revenue into three categories – being revenue derived from matchday, broadcast and commercial sources. Clubs are not wholly consistent with each other in the way they classify revenue. In some cases, we have made reclassification adjustments to the disclosed figures to enable, in our view, a more meaningful comparison of the financial results.

Matchday revenue is largely derived from gate receipts (including ticket and corporate hospitality sales). Broadcast revenue includes revenue from distributions from participation in domestic leagues, cups and UEFA club competitions. Commercial revenue includes sponsorship, merchandising and revenue from other commercial operations. For a more detailed analysis of the comparability of revenue generation between clubs, it would be necessary to obtain information not otherwise publicly available.

The publication also discloses revenue generated by the women’s team and associated activities of each club, in relation to the financial year ending in 2022 covering the 2021/22 season. This includes revenue from matchday, broadcast and commercial sources (as defined above) attributed to the women's team and associated activities. Women’s football revenue excludes revenue contributions from men’s football. The women’s team may be part of a separate corporate entity and therefore the revenue generated by the women’s team may not be included in the revenue shown in club rankings. Club pages also note whether there was profit on the sale of player transfers, attributable to the women’s team, and if the women’s team shirt sponsorship and kit manufacturer were negotiated separately to the men’s team’s equivalent agreements. These data points were received directly from clubs, with information not necessarily in the public domain.

The publication contains a variety of information derived from publicly available, or other direct, sources other than financial statements. We have not performed any verification work or audited any of the information contained in the financial statements or other sources in respect of each club for the purpose of this publication. Some charts may not sum due to rounding.

Key performance indicators shown for each Money League club relate to the football season ending in 2022, unless otherwise stated. UEFA Champions League, UEFA Europa League and UEFA Europa Conference League performances shown include participation from the final play-off round only. The UEFA club co-efficient displayed on club pages was correct as of the end of the 2021/22 season.

Comparative figures have been extracted from previous years of the Deloitte Football Money League, or from relevant annual financial statements or other direct sources.

In relation to estimates and projections actual results are likely to be different from those projected because events and circumstances frequently do not occur as expected, and those differences may be material. Deloitte can give no assurance as to whether, or how closely, the actual results ultimately achieved will correspond to those projected and no reliance should be placed on such projections.

Deloitte is a leading advisor to the sports business market.

We equip our clients with knowledge and insight that will resolve challenges, grasp opportunities and deliver transformational change.

Drawing on Deloitte's global network of expertise and capabilities, we work with some of the world’s largest sports organisations, governments and investors.