Coming soon! Results from our 2021 Digital Consumer Trends survey -
21 September 2021. Sign up to be notified of the release of our first trend.

One year on from the consumer launch of 5G in the UK, demand remains modest: as of May 2020 just two per cent of respondents (adults aged 16-75) claim to be using 5G.

COVID-19 may well have constrained the industry’s ability to promote 5G in the UK, but interest should spring back over the next 12 months, as a growing number of 5G devices, including models at mid-tier prices, become available.

The impact of COVID-19 on consumer demand for 5G:

The reshaping of connectivity demand, while temporary, may also slow the roll-out of 5G in the short term. Mobile operators tend to deploy networks to meet anticipated demand – but this has shifted from urban to residential areas and is temporarily far more diffused. Operators may consider delaying the deployment of 5G networks in traditionally busy areas until there is a return to high demand; and, in parallel, operators may prefer to bolster 4G networks in residential neighbourhoods where demand has shifted, particularly for voice calls.

While demand for 5G in 2020 may be softer than it would have been were it not for COVID-19, other markets are likely to see strong demand, particularly in Asia, with China leading due to its strong investment in 5G infrastructure. In some of these markets, 5G is perceived to be of critical strategic interest, and major investment has been encouraged. 5G has been rapidly rolled-out in China, with operators expected to spend $26 billion (£20 billion) deploying over 600,000 5G cells by the end of the year. South Korea reported approaching 7 million 5G subscribers as of the end of May 2020. Korean operators spent $3.4 billion (£2.6 billion) on 5G infrastructure in the first half of the year and plan to invest $22 billion (£17 billion) over the three years to 2022. In 2021, 5G coverage will include subways and all train stations. US network operators have also made bold commitments: Verizon announced as part of its H1 2020 results that it was accelerating its roll out and AT&T planned to have a nationwide network by mid-2020.

Demand for 5G in the UK is also likely to depend on market awareness and consumers’ understanding of the technology. According to our research, this is currently lacking. About two-thirds of adults aged 16-75 in the UK say that they ‘do not know enough about 5G’. A quarter of respondents ‘strongly agree’ with this statement and a further 38 per cent ‘tend to agree’. Only 15 per cent disagree. Among women, the perception of not knowing enough is yet higher, at 74 per cent: websites and other marketing from operators and smartphone manufacturers are failing to connect with three out of four women. Across multiple operators in several countries, the 5G section of operator websites predominantly feature men. Among older age groups, the feeling of not knowing enough about 5G is also elevated: 69 per cent among 55-64 year olds and 73 per cent among 65–75 year olds.

Figure 1. Agreement with the statement: ‘I believe there are health risks associated with 5G’ 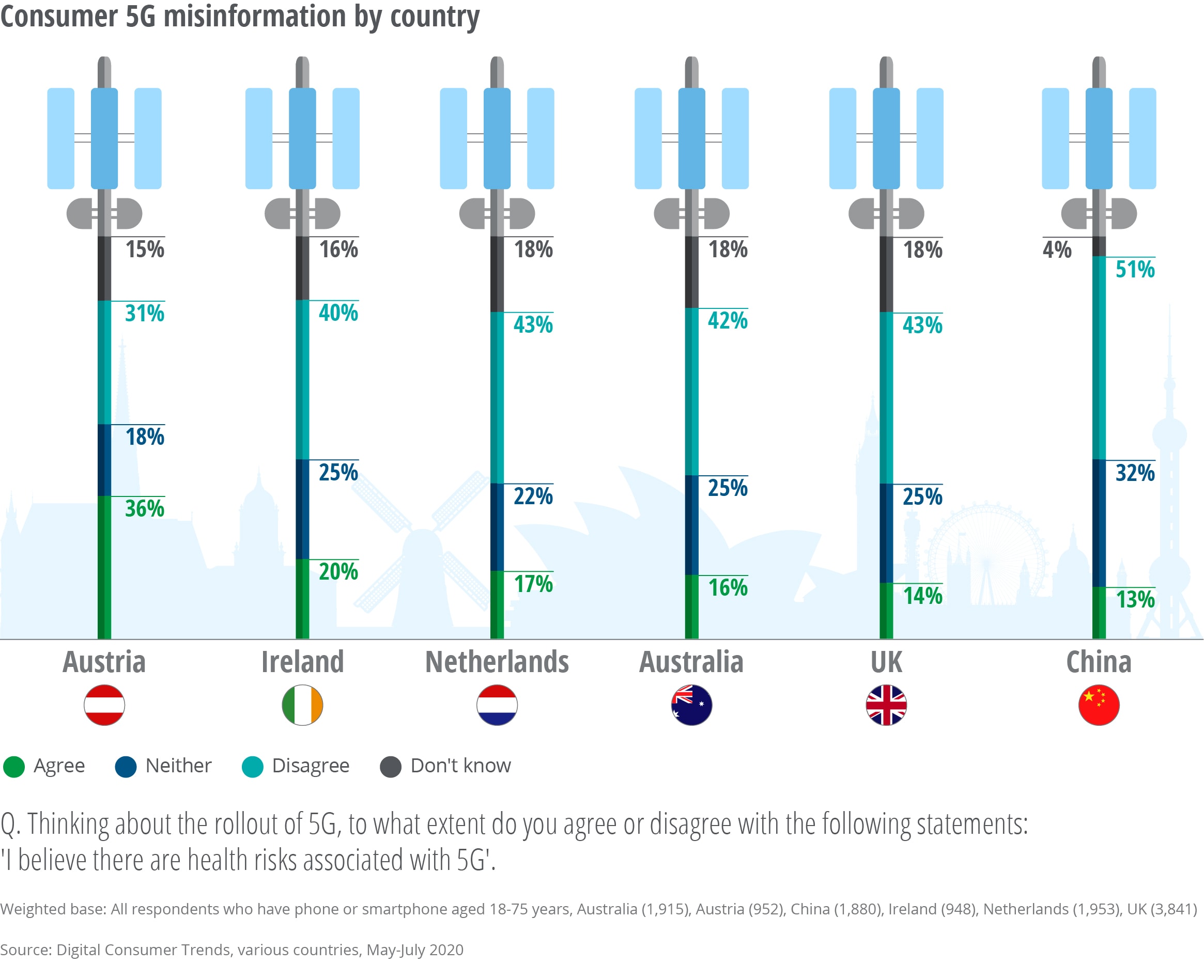 Concerns around the health impact of radio waves have always existed, notably flaring up upon the launch of 3G, 4G and Tetra networks. Exposure to such misinformation is becoming increasingly prevalent, due to the ubiquity of the internet, and its search and sharing tools.

For the record, based on all available evidence from accredited sources, there are no risks to health from either 5G base stations or from handsets. Both emit radio waves, but at a very low power level, which are well within accepted levels. 5G, and other mobile frequencies, operate within spectrum ranges that have been used for mass market activities including television and Wi-Fi.

Misinformation is pervasive, and 5G myths have been among the most seen and shared untruths of 2020. A survey undertaken by Ofcom at the end of June found that 29 per cent of respondents had come across false or misleading information about COVID-19 in the prior week. The most common topic, seen by 21 per cent of respondents was ‘theories linking the origins or causes of COVID-19 to 5G technology’. Exposure to 5G misinformation at the end of June was highest among 16-24 year olds.

In a previous Ofcom survey undertaken on 10-12 April, 50 per cent of all respondents had been exposed to 5G misinformation (linking the technology to COVID-19). Of those who saw what they regarded as misinformation, the majority (57 per cent) took no action. It is also likely that some people do not recognise misinformation as such, which suggests that the actual proportion of people exposed to COVID-19 misinformation may be yet higher than just half the population.

Understanding how mobile networks work is challenging and time-consuming, with every new generation of network more sophisticated and harder to comprehend. There are many technical explanations, accessible for free, of how mobile networks, including 5G, work. Ofcom has posted multiple reports that explain clearly how safe 5G networks are. These include a report, published in February, titled: “Electromagnetic Field (EMF) measurements near 5G mobile phone base stations”. But the typical consumer may not know where to find these reports and once located may struggle to understand them.

ICNIRP is the International Commission on Non-Ionizing Radiation Protection, an association based in Munich. Its remit is “to protect people and the environment against adverse effects of non-ionizing radiation (NIR)”. Non-ionizing radiation is any type of electromagnetic radiation that is sufficiently weak such that it does not ionize atoms or molecules. Radiation is the emission of transmission of energy in the form of waves, and is used for many common applications including mobile telephony, Wi-Fi, microwaves, X-rays and ultrasound scans. Ionizing radiation can be harmful to the body if exposed in large amounts.

Concerns about 5G’s health implications are unlikely to be a major constraint on long-term demand for the technology, but it may slow network roll-out in the short term.

A more concerning recent development, however, has been arson attacks on mobile networks, and threats to engineers working on any communications network. As of May 2020, 90 mobile phone masts – of any generation – had been attacked in the UK. Telecom engineers working on fixed networks have been forced to flee attacks by anti-5G campaigners.

Despite the volumes of misinformation, we would still however expect mobile users to migrate to 5G phones as they become more available. This will be partly out of choice, to access higher speeds and more capacity (or put otherwise, to reduce the risk of not being able to connect in congested areas). And a large proportion of 5G users will migrate out of inertia – within 24 months there may be very few non-5G models available, at any price point.

How should 5G operators respond?

5G is a major innovation which in the long run consumers will benefit from directly (in the form of better service), and indirectly through some of their suppliers using 5G to improve the user experience.

Operators should, as soon as the time is right, restart their marketing around 5G. This is the single most significant network-centric innovation for several years, and it offers the ability to portray telecom companies as innovators.

Consumer acceptance of 5G requires a clear and enthusiastic articulation of the major consumer benefits of the technology. These should be explained in terms that are understandable and relatable to the wider market. Marketing materials for 5G should reflect the diversity of their customers, whilst clearly explaining how 5G enables a wide variety of applications. This ranges from the pragmatic, such as increasing chances of connecting in busy areas, to the more audacious, such as remote surgery. 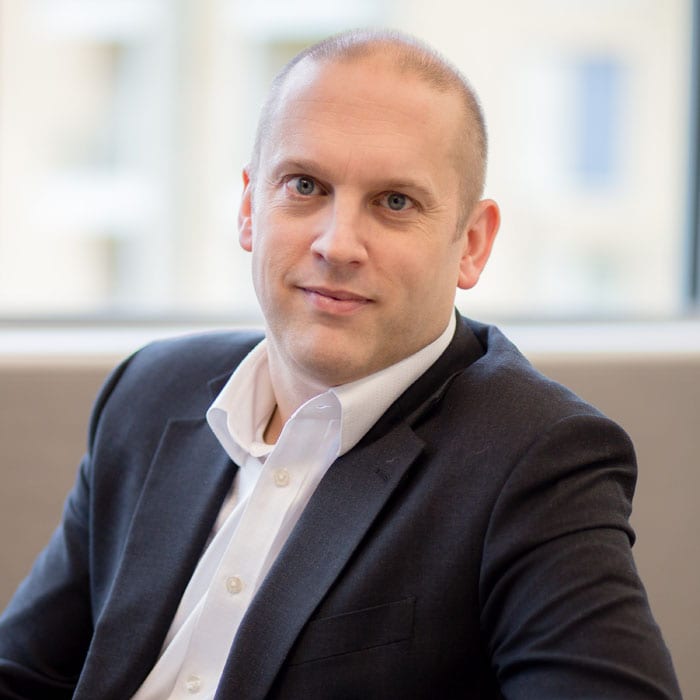 All industry stakeholders, including mobile operators, equipment vendors and regulators, should consider how to re-engage in a debate that they may well have thought had been concluded. Otherwise, adoption of 5G may well be slowed by worries about 5G’s health impacts. Industry stakeholders will need to provide accessible and evidence-based information on the subject, and they should also consider which media channels are best suited to engage in the debate.”

We have launched five articles so far from our 2020 Digital Consumer Trends survey. Click through the links below to discover more insights!


Read more
The future of mobile operators: online or on the high street?

How we can help 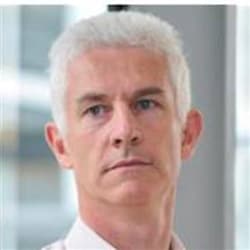 The impact of 5G on consumers is likely to be less pronounced than with the 4G upgrade but should still be tangible. Businesses and the public sector are a different story. 5G is poised to drive massive changes for organisations as they look to automate and drive agility.”

Deloitte can help you understand some of the breakthroughs that 5G brings, how it might help transform your organisation and, importantly, help you make it happen.

Communicating risk in a digital world

The world today is crowded with innovative technology that has the potential to change the way we travel, communicate, work and care for ourselves and others – for the better. The launch of 5G could potentially introduce many disruptive technologies and present opportunities, however these new technologies and innovations also often raise concerns.

Many organisations will be accelerating digital solutions, or fast-tracking physical products to market in the coming weeks and months, either to help with the response to the COVID-19 pandemic or to resolve a problem related to it. Product launches, digital transformation and new campaigns carry greater reputation risk and reward when done at speed.

Therefore, organisations should think about the ways to communicate the risks and benefits of their new products and services to pave the way for their acceptance. How? Find out here. 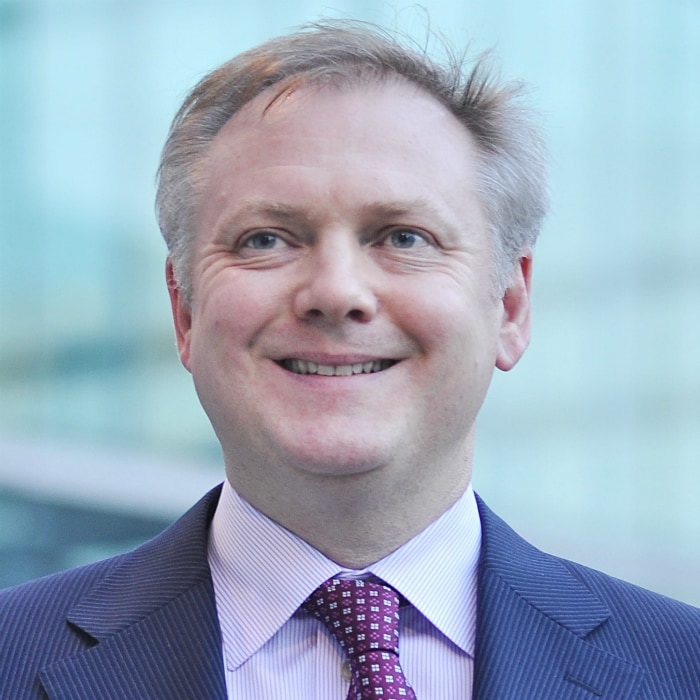 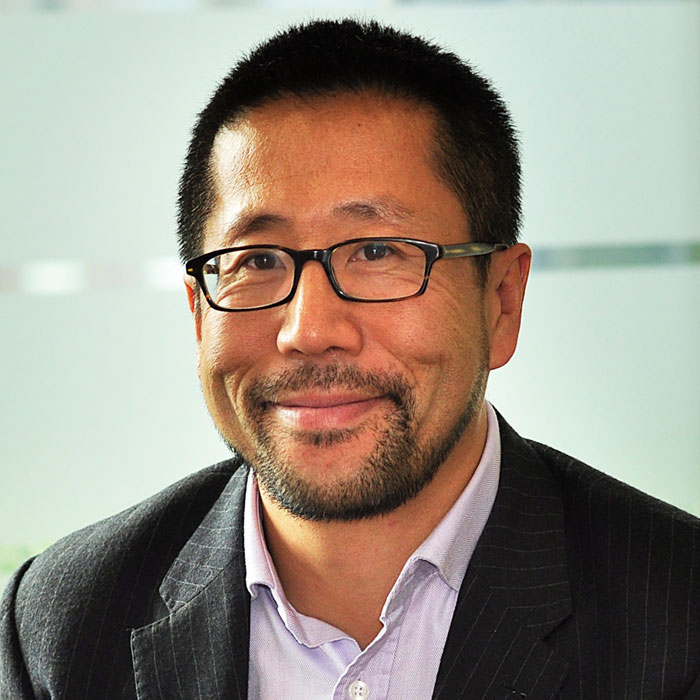 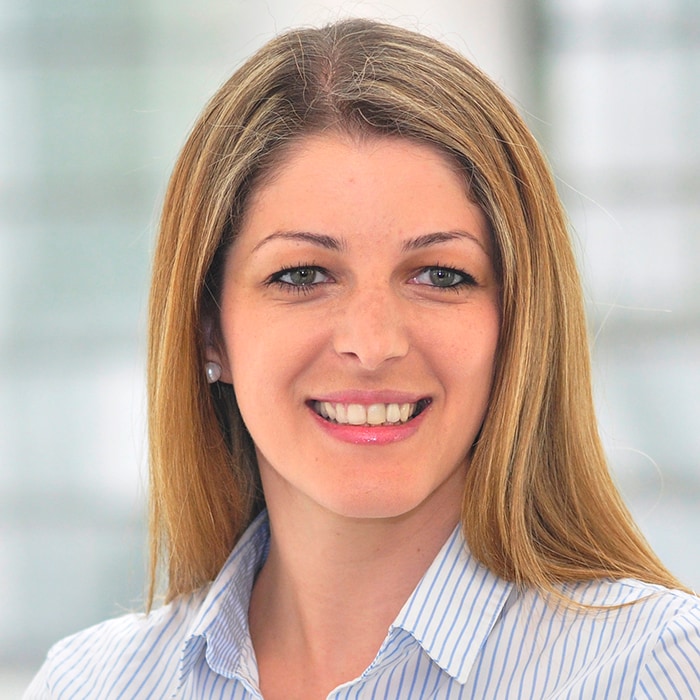 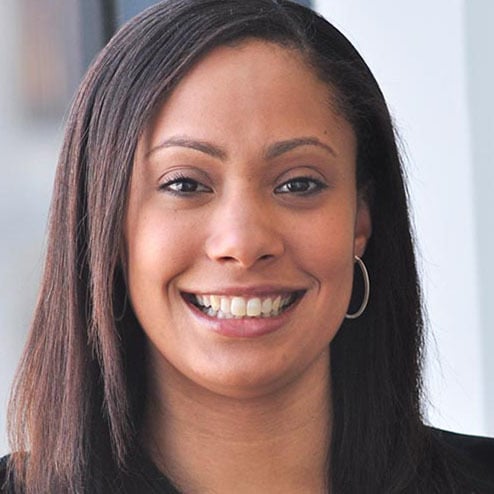 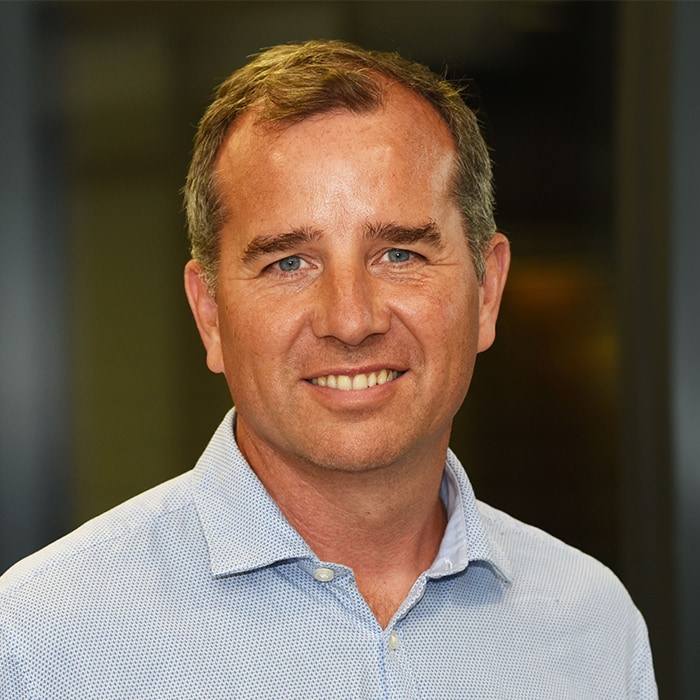 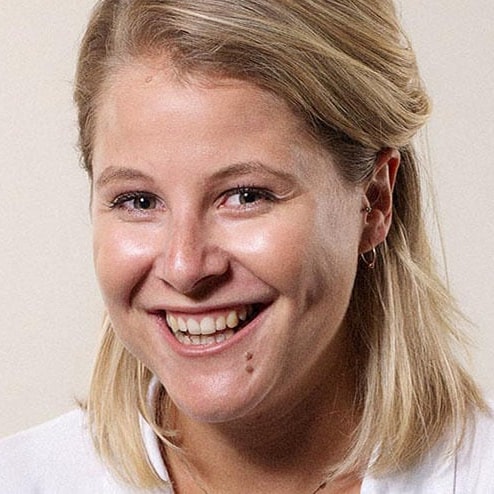 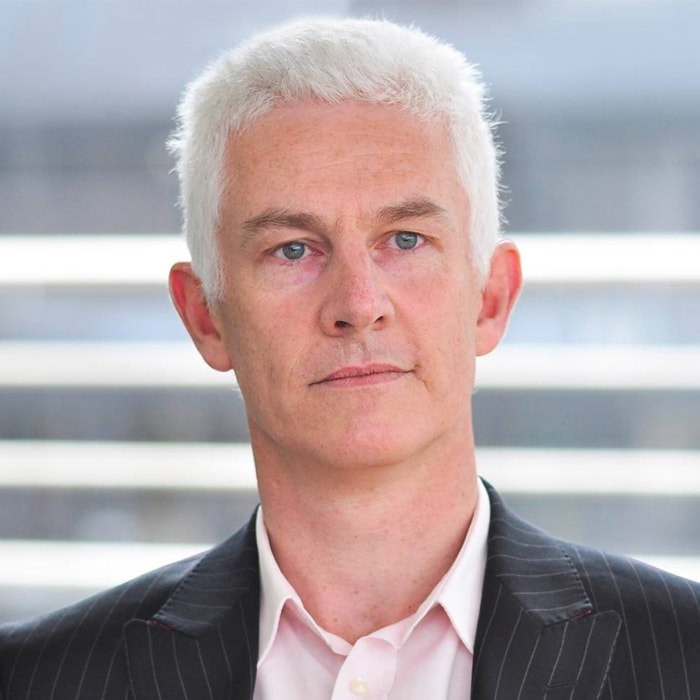 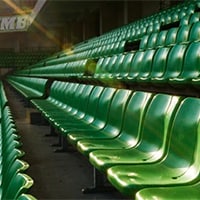 5G in football - a winning strategy 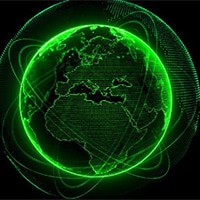 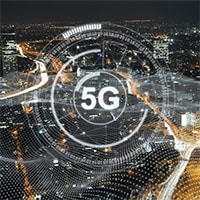 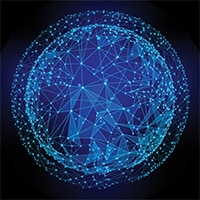 The future of connectivity: The potential value of 5G technology