Brazil finally hears some good news on the economic front, as the economy grows by 0.2 percent quarter over quarter in Q2 2017 after eight straight quarters of contraction. Besides, key indicators suggest that the growth will continue in Q3.

In August 2017, Neymar Jr. dribbled his way to Paris St. Germain as the most expensive player in football history.1 Having to prove that he was worth the US$ 263 million they paid to get him, Neymar didn’t take time settling in, finding the net in his very first game for the club.2 Back home, how much policymakers would have yearned for a similar performance by the economy. With one of the sharpest downturns in recent history, Brazil desperately needed some good news. Luckily, fortune smiled on the economy in the second quarter, not as much as it did on Neymar, but enough to keep hope afloat.

The economy grew by 0.2 percent quarter on quarter in Q2 2017 (figure 1), making its way out of a deep recession spanning eight straight quarters of contraction in 2015–2016. Key indicators suggest that growth will continue into Q3 as well. Consumer and business confidence have edged up, and exports have bounced back. The cost of capital has declined, with the policy rate now down by 675 basis points (bps) over the past year. The pace of the recovery is, however, still slow. And whether it will pick up depends on further reforms, especially on the fiscal side. 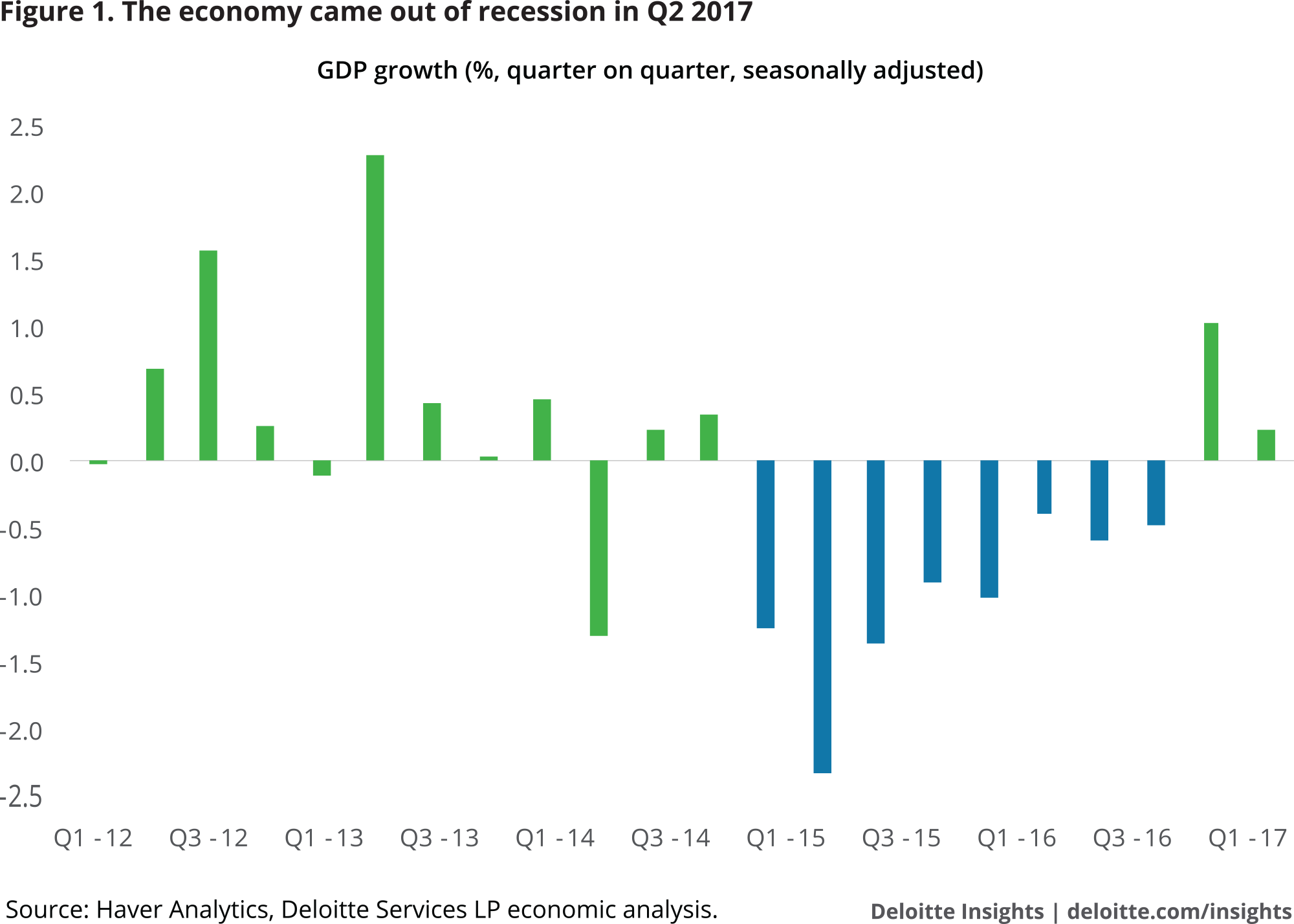 A rebound in private consumption aided the economy in Q2. Private consumption expanded by 1.4 percent, aided by low inflation and lower debt servicing costs. The uptick in economic activity has rubbed off on the labor market as well, with the three-month moving average of the unemployment rate falling further in November (12.4 percent) from the peak of 13.7 percent in March.3 As a result, consumer confidence is inching up, although the level is still below the 100 mark that distinguishes pessimism from optimism.4

There is positive news from the external sector as well. Exports—in terms of both value and volume—continue to gain momentum (figure 2). This has aided external balances, with the trade surplus going up this year and the current account returning to surplus in Q1 (1.0 percent of GDP) for the first time since 2007. Manufacturing too seems to have turned a corner, but the pace of recovery is still slow. This is not unexpected, given that demand growth has been moderate until now. Also, any growth in manufacturing is unlikely to push up investments by much in the near term, as capacity utilization is still low, especially relative to the heydays of 2007–2008.5 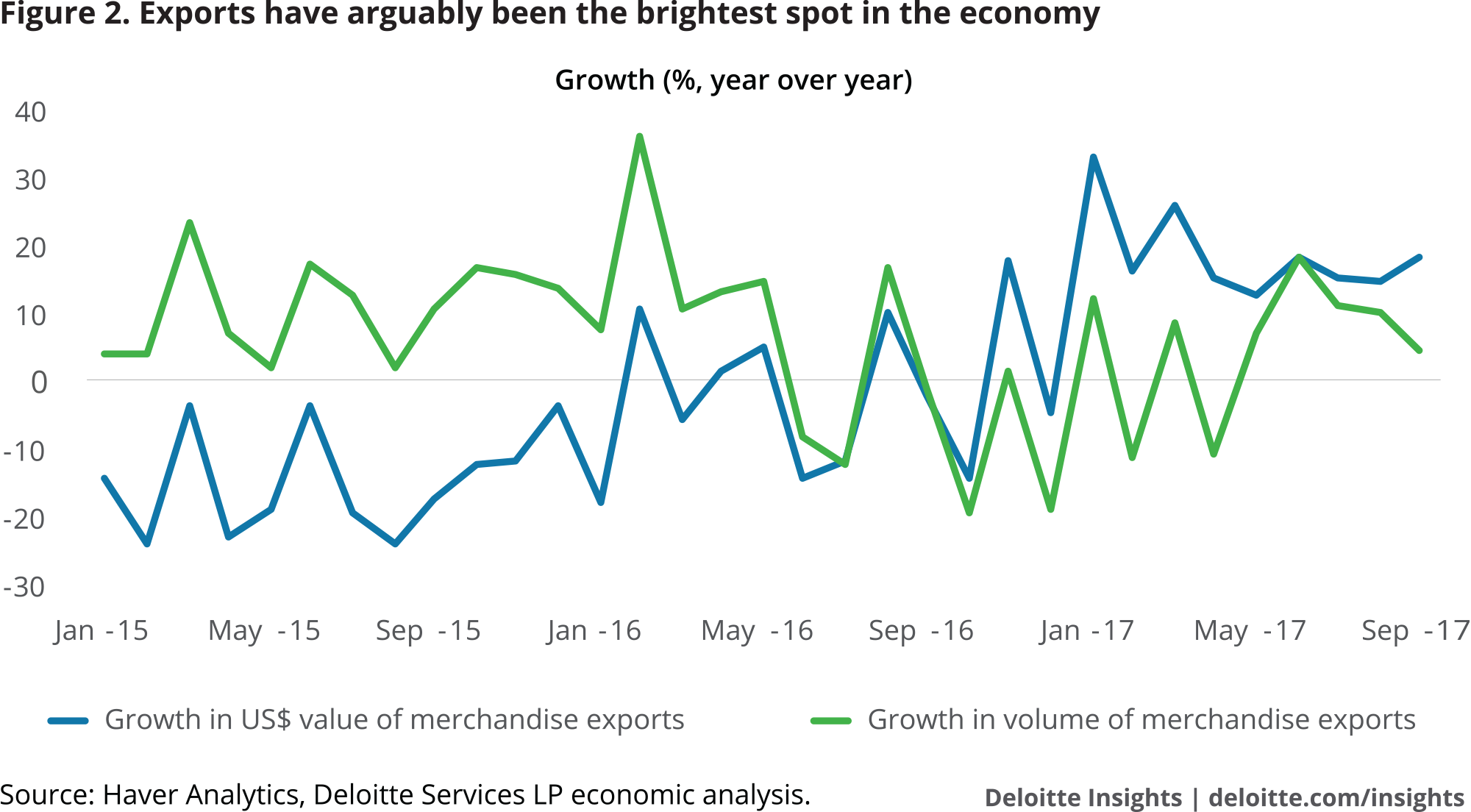 Arguably, one of Brazil’s biggest nightmares in recent years has been inflation staying above the BCB’s mid-point target for much of 2008–2016.6 By January 2016, inflation had jumped to 10.7 percent. Rising inflation, in turn, translated into three ills for the economy. First, high inflation dented real incomes, which, along with rising unemployment, weighed on private consumption. Second, price pressures translated into higher interest rates, pushing up debt servicing costs for households and the government. Finally, inability to rein in inflation cost the BCB and the economy much credibility. And capital flows and bond yields bore the brunt of this.

Thankfully, the tide has changed this year, much to the BCB’s credit. The central bank stuck to high interest rates last year even as the economy tanked, to get prices under control. As the data on inflation improved, BCB was quick to change track by cutting rates, thus ensuring a healthy mix of falling inflation and lower interest rates (figure 3). With the tide turning in the fight against inflation and confidence in the BCB restored, the National Monetary Council in June lowered the inflation target for 2019 to 4.25 percent and for 2020 to 4.0 percent from the current 4.5 percent.7

Inflation was 2.5 percent in September, below BCB’s 3.0 percent lower limit. No wonder then that the BCB cut the SELIC rate by a further 75 bps to 7.5 percent in October, its sixth rate cut over the past year.8 While the rate cut is yet another indicator of BCB’s confidence in the fight against inflation—inflation expectations for the next 12 months fell to 4.0 percent in November, the lowest since 2009—the quantum of the cut (75 bps rather than 100 bps each for the previous four cuts) hints at a likely end to the easing cycle by Q1 2018 at the latest.

Time for a worthy partner on the fiscal side

Measures by the central bank to reassert control over the economy will not give the desired results if the fiscal side does not stick to its side of the bargain, especially given the surge in public debt over the past few years. This, in combination, with high yields had pushed the budget further into deficit (figure 4). While yields have fallen since late last year, primarily as confidence returns to the economy, this may be a temporary hiatus if announced reforms do not see the light of day. Markets had taken much encouragement from initial measures aimed at privatization and capping real government spending for the next 20 years9 but will need further reforms to sustain the momentum.

The trickiest challenge would be to reform pensions, without which it will be impossible to stem the rise in public debt. Any legislation on that will be hard to come by. First, the move to reform pensions and to raise the retirement age has been hotly contested by labor unions, thereby leading to watered-down reforms.10 Second, to push such a strong measure through the legislature appears difficult given recent political turmoil related to corruption allegations.11 Finally, with the government’s approval ratings at a record low and a year left for the next presidential elections, legislators may hesitate to take unpopular measures.12 Markets, however, may not be patient enough to wait for a new government, likely impacting bond yields. If that happens, it would be a big setback in efforts to get Brazil’s fiscal house in order. Most importantly, it would undermine confidence in the economy and, hence, impact fixed investments—both foreign and domestic—critical for not only short-term economic revival, but also medium-to-long-term growth.

Akrur Barua  is an economist with the Research & Eminence team. He is based in Mumbai.

Brazil: It takes two to tango has been saved

Brazil: It takes two to tango has been removed