Job vacancy announcements are rising much faster than hires, even as unemployment remains high. Although there is some evidence of the skills mismatch rising after 2008, other evidence is more equivocal.

One piece of economic news getting some attention lately is that job vacancy announcements are rising much faster than hires, even as unemployment remains high and a substantial number of potential workers remain on the sideline. One explanation is that companies are finding it increasingly difficult to find people with the skills they need. Although there is some evidence of the skills mismatch rising after the global financial crisis of 2008 (henceforth referred as the crisis period), other evidence is more equivocal. In particular, industry-level analysis points to a skills mismatch situation during the current economic expansion (post June 2009), which is at par with the situation during the last expansion post the 2001 crisis (2003–07). This is actually not all that surprising since employers were expressing concern that they could not find workers with the skills they needed even in the years leading up to the last recession. 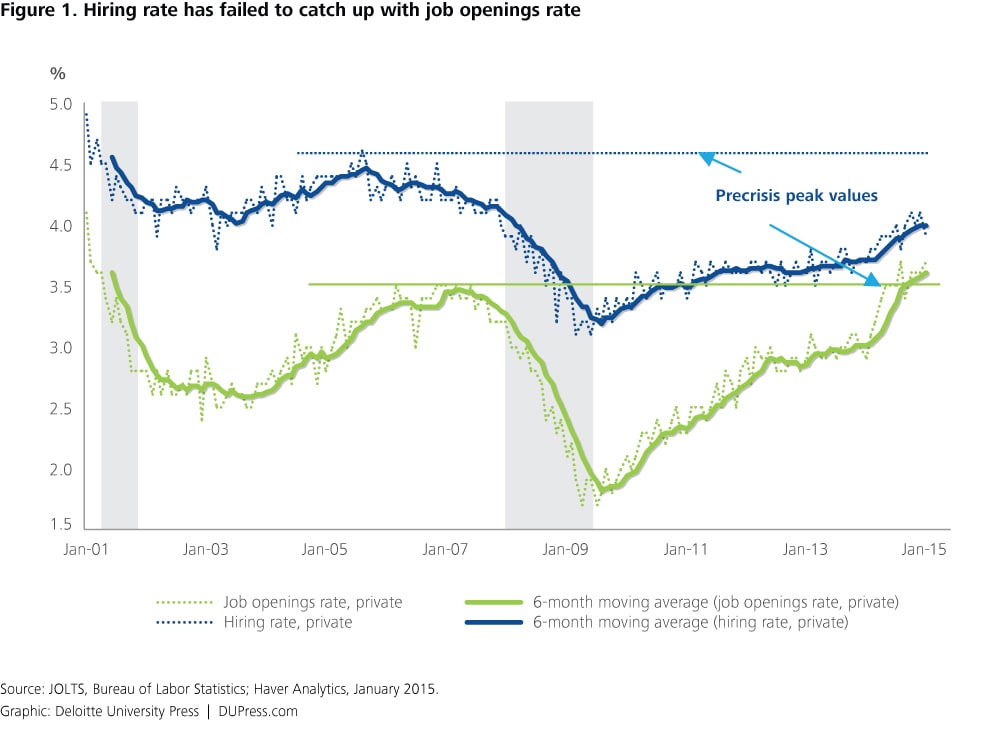 One reason for hires to lag openings could be that businesses find it difficult to find workers with the skills they need. For example, a recent Deloitte survey of manufacturing executives identified the shortage of quality and availability of talent as a reason for unfilled positions.1 The average estimate among the 84 percent of polled manufacturing executives who thought there was a talent shortage was that 6 out of 10 open skilled production positions remain vacant due to talent shortage.

Three labor market indicators do seem to prove there is a rising skills mismatch. The first is a Beveridge curve, which plots the relationship between the unemployment rate and job openings rate over the course of a business cycle. The normally downward sloping curve shows that higher unemployment rates are associated with a lower rate of job openings. An outward shift in the Beveridge curve suggests a deterioration in the matching and hiring process in the labor market—that is, for any given level of openings, the unemployment rate is higher.2 The higher the shift, the greater the degree of skills mismatch in the labor market. 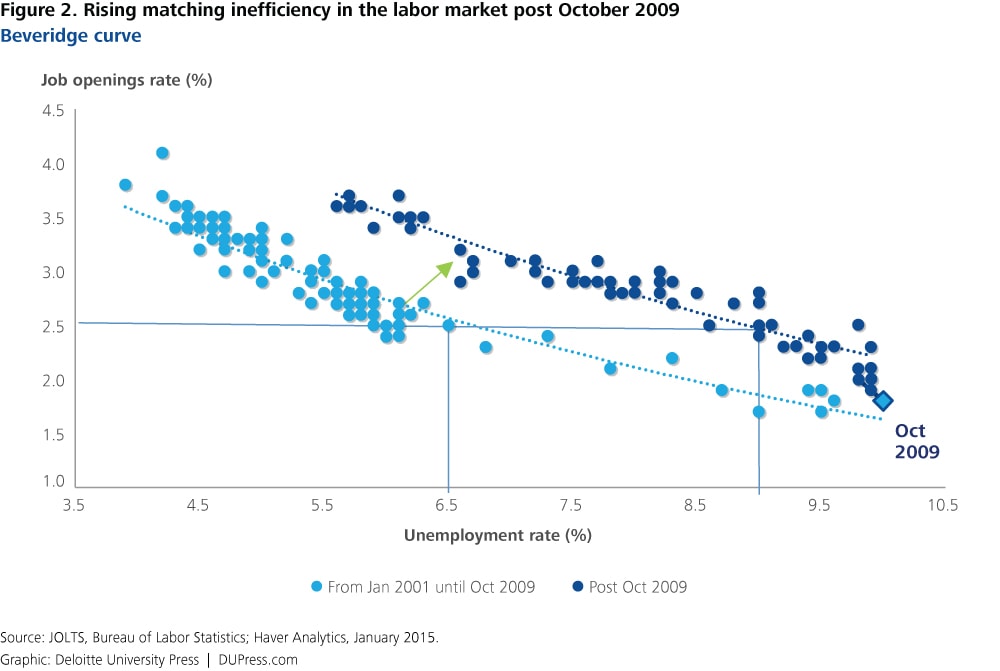 The Dice-DFH vacancy duration statistic measures the average time required to fill open positions.3 Currently, it is at a 14-year high, which implies that new job positions have been open for longer in recent years (figure 3). Both these indicators point to the inability of employers to match a suitable candidate from existing job seekers to a vacant position. 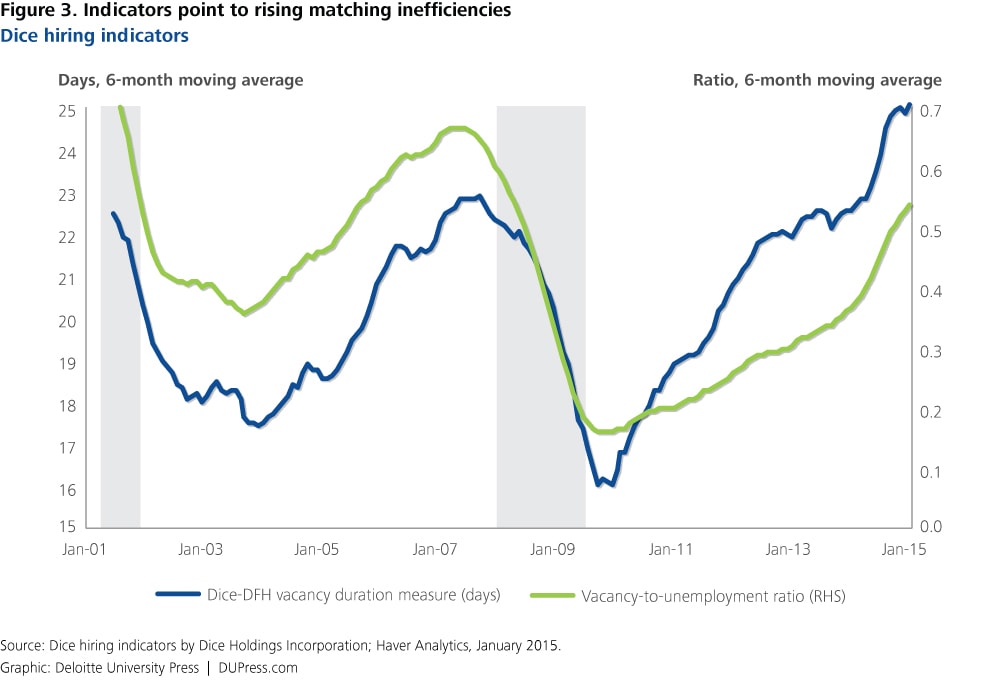 If the interpretation of the Beveridge curve and the two Dice indicators discussed above is correct, one might conclude that employers are finding it harder to fill vacancies with required skill sets in the more recent period than in the precrisis period. However, the Dice recruiting intensity index points to just the opposite.

The Dice-DFH recruiting intensity index quantifies the effective intensity of recruiting efforts per vacancy by US employers with vacant job positions. As shown in figure 4, the recruiting index was high before the crisis, indicating that employers were finding it tough to fill vacant positions with limited available workers. It fell during the 2008 recession, as expected, because there were lower job vacancies and a higher number of unemployed workers looking for jobs. However, the index continued to remain low well after the recession was over, even though the job openings rate kept increasing steadily. It has been only since mid-2014 that the index has begun to rise more rapidly, although it remains well below prerecession levels. 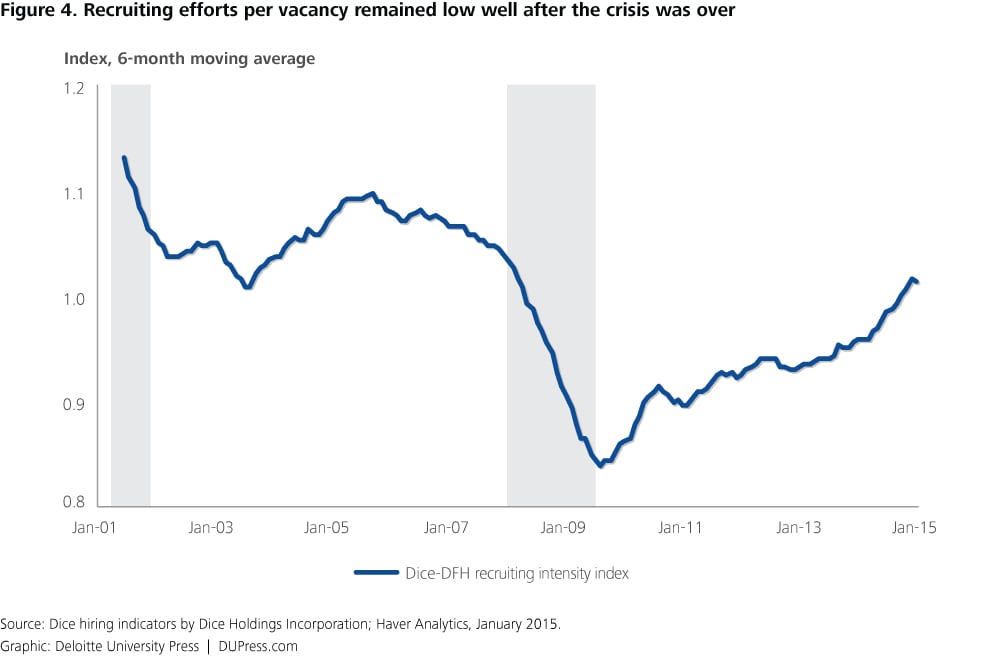 The final piece of evidence we examine is an industry-level analysis for two relatively strong growth periods, one before and the other after the recession. The period 2004–06 represents the middle of the high economic expansion prior to the crisis, and the period 2012–14 represents years with steady improvement in the economic performance post crisis. Figures 5a and 5b compare the average monthly share of job openings and the share of annual employment gain by industries for the two periods.4 Making the simplifying assumption that each sector requires specific skills that would make it difficult for unemployed workers from one industry to freely move to another, these charts compare relative openings with relative employment gains. Thus if some industries show a higher job openings share while employment gains are concentrated in other industries, it might indicate a skills mismatch. However, with a few exceptions during 2004–06 (such as in the manufacturing and information industries), the parity between new positions created and employment gains in industries were very similar in both periods. Therefore, while this analysis cannot speak to the size or even existence of a skills mismatch, it does seem that a bad problem has not become worse. 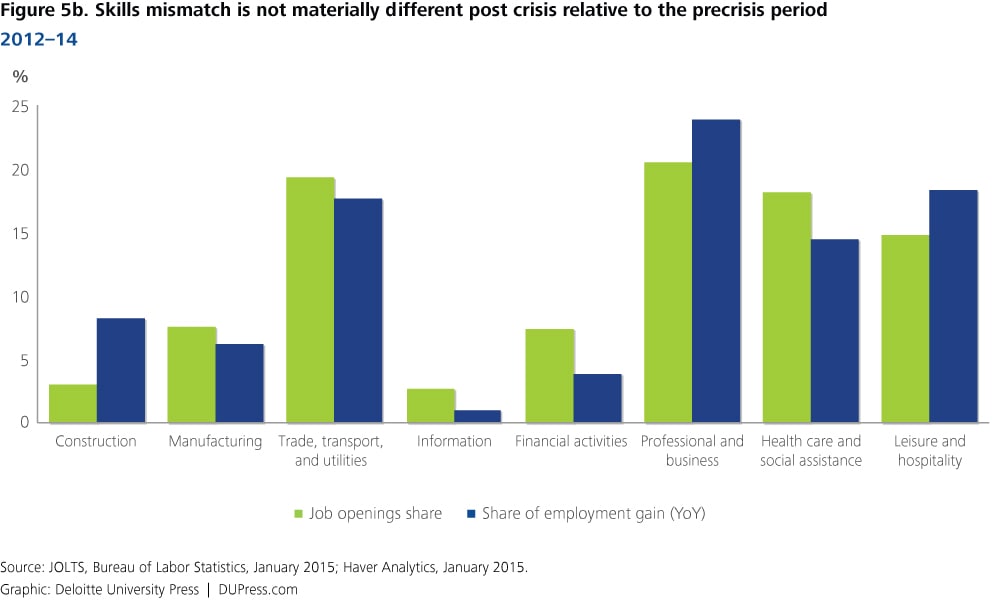 In addition to the skills mismatch explanation, there are several reasons why employers may be keeping positions vacant for longer periods despite workers being available. Employers might be skeptical about the long-term outlook of the economy and so are hesitant to hire even though they have posted vacancies. The number of qualified candidates applying for a position may be high, making it difficult for employers to choose the “best candidate.” Also, the reduced mobility of workers (especially homeowners with negative home equity) may make them less likely to apply for and accept positions in places away from where they currently reside. While all of these factors are likely playing a role in vacancies rising faster than hires, it will take more time before we know if any one explanation currently dominates or will dominate in the years to come.

A growing skills mismatch? Not necessarily has been saved

A growing skills mismatch? Not necessarily has been removed