Companies worldwide are questioning their forced-ranking, rigid rating systems and once-a-year appraisal processes. This is the year a new model of performance management will likely sweep through HR.

Create and download a custom PDF of the Human Capital Trends 2014 report.

Traditional performance management —the annual process of rating employees’ performance and ranking them against their colleagues—is widely considered to be broken.

These “forced curve” evaluations became popular under the influence of the GE model during Jack Welch’s tenure, but they were originally conceived around the turn of that century—the turn of the 19th to the 20th century, that is. At that time, employees were viewed strictly as “workers” whose performance could be accurately measured by output: the number of railroad ties installed, hours worked, or other numeric measures.

Today, more than 70 percent of all employees work in service or knowledge-related jobs. Their performance is driven by their skills, attitude, customer empathy—and by their ability to innovate and drive change by working through teams. These skills must be built over time, and successful performance management must be focused on constantly developing these capabilities rather than ranking them at a moment in time.

In addition, today’s business climate and business priorities seldom follow the annual evaluation cycle. Goals shift, strategies evolve, and employees often switch between multiple projects under various team leaders. Given this dynamic, it is hardly surprising that our research shows that organizations where employees review their personal goals quarterly—or even more often—were nearly four times more likely to score at the top of Bersin by Deloitte’s Total Performance Index.1 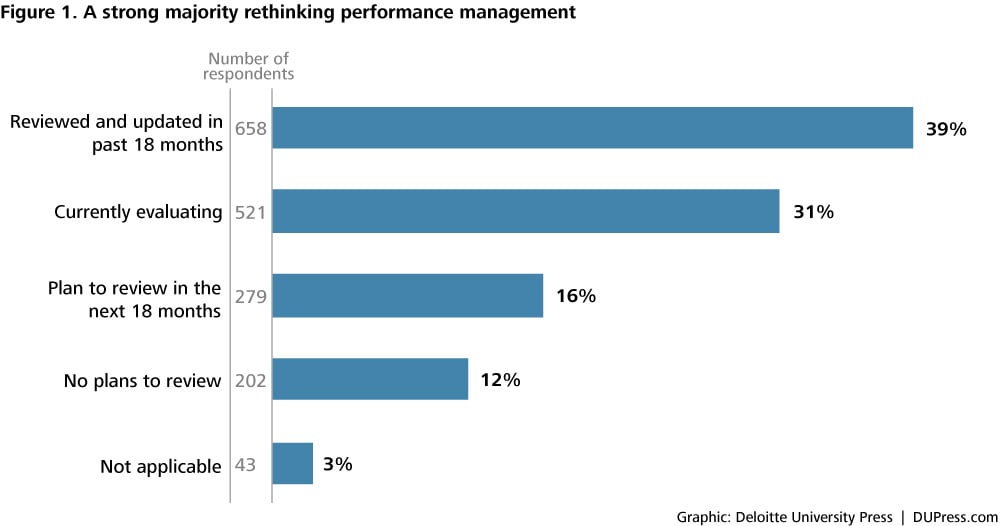 In a world where employee retention and workforce capability are significant indicators of business success, the performance management process should focus on continuous coaching and development, rather than competitive evaluation. Managers who provide regular feedback and opportunities to improve are far more likely to field high-performing teams than those who retain once-a-year rankings.

Why grading on the curve consistently fails

Perhaps the fundamental aspect of traditional performance management is grading by the curve or forced ranking of employees. This process, widely known as “rank and yank,” has been found in many companies to demoralize employees, create animosity, and spur good people to look elsewhere for work.

At Microsoft, which recently abandoned the practice, the ranking process resulted in “capricious rankings, power struggles among managers, and unhealthy competition among colleagues.”2

The distribution of employee performance more often follows the “long tail” rather than the traditional “bell curve,” especially at talent-intensive companies that thrive on expertise and innovation. In other words, some employees are hyperachievers, while many others work at the middle level of performance. In industries such as software, a top performer can often outperform a mid-level performer by as much as tenfold.

In these companies, the performance management system should treat high performers very well, while encouraging mid-level employees to improve through coaching and development. A forced bell curve diminishes the value of the top performers and pushes many mid-level performers into the bottom. In the process, it inadequately rewards top performers and fails to motivate middle-of-the-road employees.

A new role for managers

Shifting away from annual performance evaluations toward a process of continuous coaching and improvement requires a new role for managers.

The days when managers could lead from a position of command and control are over. In today’s high-performing teams, employees must take ownership of their performance and act on their own to improve their capabilities. Managers become coaches, rather than evaluators.

A critical feature of the new “coaching and development” model of performance management is separating feedback provided to employees from compensation decisions.

Neuroscience research shows that conversations about compensation provoke an almost primordial “fight or flight” reaction among employees, which obviously inhibits the coaching process.3 Rather than directly linking ratings and salary increases or bonuses, compensation decisions should be based on the critical nature of an employee’s skills, the cost of replacing them, their value to customers, and the external labor market.

While employees need to be held accountable for the results they produce, most people perform best when they are given tools to succeed and coaching to improve performance. Companies like Juniper Networks,4 New York Life,5 Motorola Solutions,6 Kelly Services,7 and others have all reengineered their process, eliminated ratings, and found substantial improvements in engagement and performance as a result. Companies in other countries like Brazil, Germany, the United Kingdom, and Japan are eager to follow their lead, and recognize that they are far from ready (figure 3). 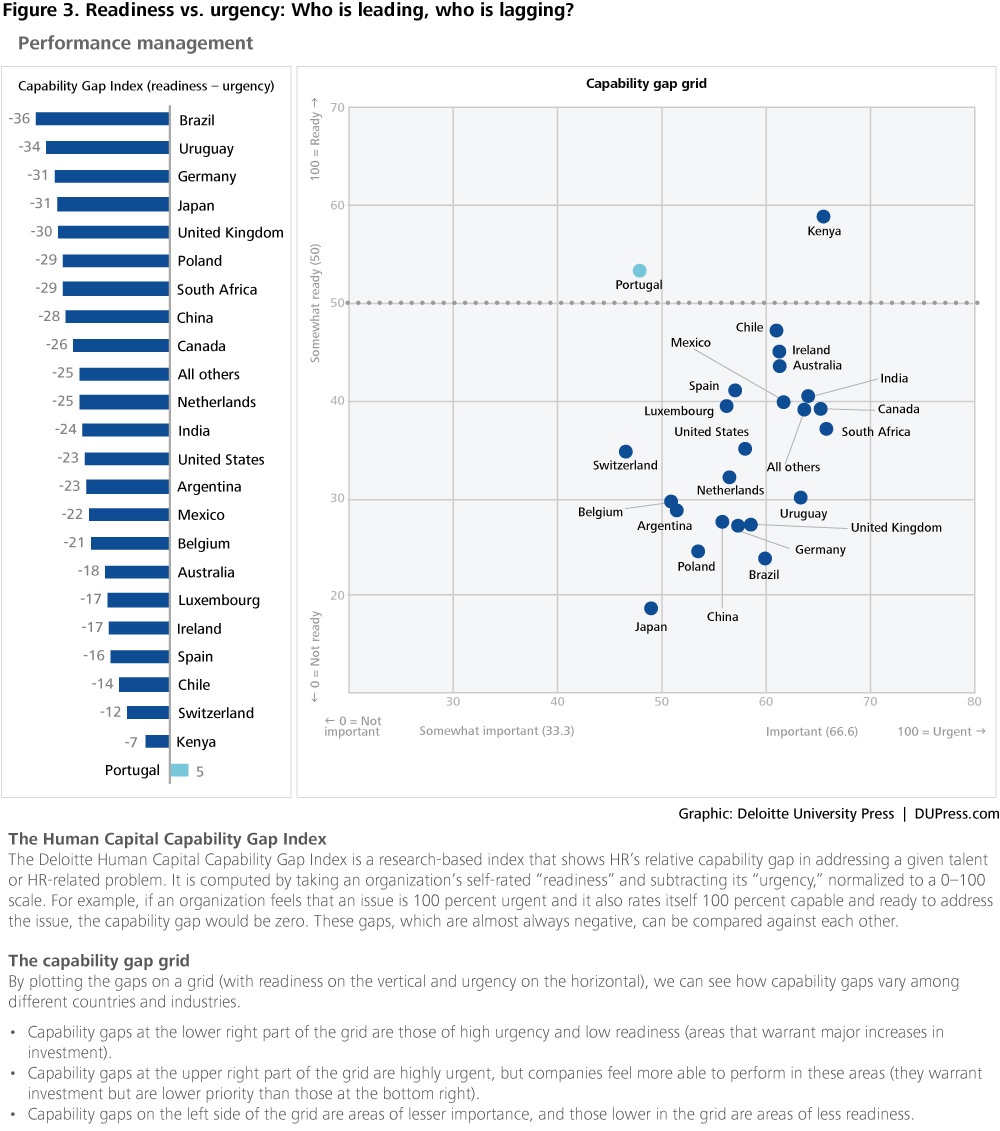 Lessons from the front lines

A continual and collaborative approach to performance development

Prior to radically reforming its performance management system, managers at multinational software company Adobe spent over 80,000 hours per year on traditional performance evaluations—a process one manager described as “soul-crushing.”8

Adobe, a company of 11,000 employees, 54 percent of whom work in North America, tried for five years to modify the traditional performance management system before abandoning it as inconsistent with Adobe’s strong culture of teamwork and collaboration.

Either an employee or a manager may request a “check-in” every three months. Before the actual meeting occurs, a group of employees provides feedback on the employee’s performance.

The results form the basis of a conversation about performance improvement, rather than a zero-sum dispute about compensation or ranking. The goal is to make coaching and developing a continuous, collaborative process between managers and employees—a far more motivating outcome.

The results have been profound: Since rolling out the new approach worldwide, Adobe experienced a 30 percent reduction in voluntary turnover in a highly competitive talent environment.

Where companies can start

A successful shift to leading-edge performance management—replacing annual ranking and yanking with continuous feedback, coaching, and development—begins with a frank determination of whether rigid performance evaluation systems are advancing a company’s business priorities. If not, as many organizations increasingly recognize, it is time to take action. Potential starting points include:

Today’s workers expect to be held accountable for results—but they also expect coaching, development, and regular feedback. Look carefully at the performance management process to see if it truly drives performance today or is merely an artifact of the past. In many cases, a shift from “evaluation” to “development and performance improvement” will drive appreciable results. 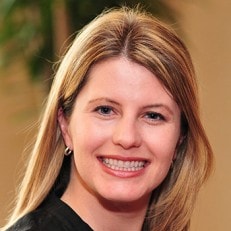 Stacia leads Bersin by Deloitte’s talent management research practice. Her areas of expertise include talent strategy, workforce planning, performance management, and leadership development. Previously she worked for the Corporate Executive Board and also served as an adjunct history professor at Northern Virginia Community College. Stacia holds a master’s degree from the London School of Economics and bachelor’s degrees from Randolph-Macon Woman’s College.

Performance management is broken has been saved

Performance management is broken has been removed