The future of automation in the banking industry has been saved

The future of automation in the banking industry has been removed

The future of automation in the banking industry

What can we learn from ATMs?

Will advances in robotics, artificial intelligence, and quantum computing make machines so smart and efficient that they can replace humans in many roles today? The answer, if you believe the assertions of many experts, seems like a yes.

It is only natural, I presume, to feel somewhat anxious when you hear prognostications about automation’s impact on jobs.1 As a parent worried about my kids’ future, I can’t help but wonder work as we know it, and, as a result, society itself, will be radically transformed by machines in the decades ahead.2

Will advances in robotics, artificial intelligence, and quantum computing make machines so smart and efficient that they can replace humans in many roles today? The answer, if you believe the assertions of many experts, seems like a yes.

This is primarily because the wave of automation we are witnessing today is a byproduct of multiple technologies that have accelerated in the past few years to such a degree that we are reaching a tipping point in terms of superior performance and cost economics. (By “automation” I mean machines/tools powered by computing and artificial intelligence that can now do tasks hitherto done by people.)

As is typical of any information technology, changes wrought will hit all industries. Banking, which has been at the forefront of this new “machine age,”3 will especially experience profound impact. Think about it: Robotic process automation and artificial intelligence applications are becoming more pervasive, with automation rapidly moving from the back-office to the front-office.4 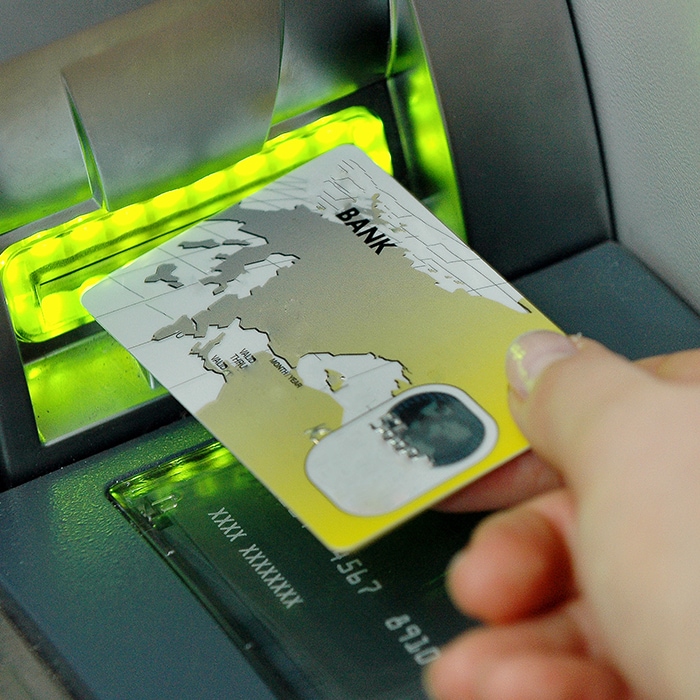 As we contemplate what automation means for banking in the future, can we draw any lessons from one of the most successful innovations the industry has seen—the automated teller machine, or ATM? Of course, the ATM as we know it now may be a far cry from the supermachines of tomorrow, but it might be instructive to understand how the ATM transformed branch banking operations and the jobs of tellers.

It is hard to believe, but ATMs have been around for 50 years now. Since their modest beginnings as cash-dispensing services, ATMs have evolved with the times. The 1980s saw the birth of “drive-up” ATMs, followed by “talking” ATMs with voice instructions in the late 1990s. And, more recently, ATMs with video capabilities have become more prevalent.5

The latest innovations, though, are the integration with mobile technology through so-called “cardless” ATMs with larger and more tablet-like screens.6 The next stage in the evolution of the ATMs maybe “robo-banks” that can pretty much do what tellers in branches do today.7 But we will come back to this point in a bit.

But how did ATMs affect the job of tellers? Interestingly, as ATMs expanded—from 100,000 in 1990 to about 400,000 or so until recently—the number of tellers employed by banks did not fall, contrary to what one might have expected. According to the research by James Bessen of Boston University School of Law, there are two reasons for this counterintuitive result.

First, by reducing the cost of branch operations, ATMs made it possible to rapidly expand the number of branches. Although fewer tellers were required in any single branch, new branches meant more tellers. Second, ATMs freed tellers from some of the basic tasks and enabled them to focus on more “relationship-building” efforts and complex/nonroutine activities.8

Beyond the impact on tellers, ATMs also introduced new jobs—armored couriers to resupply units and technology staff to monitor ATM networks. There were also new challenges in the form of complexities of having multiple systems accessing customer information.

As of 2014, there were about 520,000 tellers in the United States—with one-in-four working part-time. This number is expected to decrease by 40,000 by 2024.9 Proliferation of mobile banking, the rise of “cognitive agents,”10 and other innovations, such as the “humanoid robot,”11 may further reduce the demand for tellers.

It is hard to believe,
but ATMs have been around for 50 years now. Since their modest beginnings as cash-dispensing services, ATMs have evolved with the times.

The impact of automation

So what can we learn from the automation ushered in by ATMs and its impact on jobs in retail banking?

First, as the data show, automation, by reducing the cost of operating a business, may free up resources to invest in other areas. (In the case of ATMs, it was in new branches and new services.) Second, instead of replacing jobs entirely, automation displaced certain tasks and enabled branch staff to “skill-up” and become integral in delivering other high-value added services such as business banking.

In my view, what these facts suggest is that it is important to distinguish between “tasks” and “jobs.” Most jobs are a bundle of tasks—some of which maybe manual or routine (and thus lend themselves to automation), while some require more abstract skills. As David Autor, the MIT economist, points out “the interplay between machine and human comparative advantage allows computers to substitute for workers in performing routine, codifiable tasks while amplifying the comparative advantage of workers in supplying problem-solving skills, adaptability, and creativity.”12

So the question is not whether automation will completely replace jobs, but what “codifiable” tasks can be done by machines (like ATMs), and what complementary skills are better done by humans alone (at least for now), and how best to design these “augmented” jobs of the future.

This is not to suggest that as computers become more intelligent, they may not able to perform the more abstract tasks that still require humans. In my view, we will ultimately get to that world, although probably at a slower pace than most people expect. But as machines become more dominant, further product innovations and changes to competitive market structure will lead to new and more complex tasks that will still require human effort.

Ultimately, the lessons for the banking industry maybe to anticipate and proactively shape how automation will spur innovation, increase demand, and alter the competitive dynamics, beyond operational transformation.

By taking a longer-term view and reimagining the new human-machine interface in almost every job, from the back-office to the front-office, banks can better prepare for a world where people and machines complement each other, and expand the net benefits to both organizations and society.

Traversing this path won’t be easy but the sooner the banking industry begins this journey, the better it will be for everyone, even those whose jobs maybe most impacted by automation.

Ultimately, the lessons for the banking industry maybe to anticipate and proactively shape how automation will spur innovation, increase demand, and alter the competitive dynamics, beyond operational transformation.

What are your views on how automation might impact the banking industry in the future? Are the lessons from ATMs relevant to our thinking?

1 The Economist, “Will smarter machines cause massive unemployment,” June 25, 2016, https://www.economist.com/news/special-report/21700758-will-smarter-machines-cause-mass-unemployment-automation-and-anxiety

6 Alex Morrell, “Bank tellers are in danger of extinction as the ATM of the future takes over,” Business Insider, June 13, 2017. http://www.businessinsider.com/bank-teller-automation-on-the-rise-with-new-atm-technology-2017-6

8 James Bessen, “Toil and Technology,” Finance & Development, Vol. 52, No. 1, International Monetary Fund, March 2015 http://www.imf.org/external/pubs/ft/fandd/2015/03/bessen.htm; James Pethokoukis, “What the story of ATMs and bank tellers reveals about the ‘rise of the robots’ and jobs,” AEIdeas, American Enterprise Institute, June 6, 2016. http://www.aei.org/publication/what-atms-bank-tellers-rise-robots-and-jobs/; Bourree Lam, “Life as a Teller in the Age of the Automated Teller,” The Atlantic, August 12, 2016. Machine https://www.theatlantic.com/business/archive/2016/08/the-teller-in-the-age-of-the-atm/495671/

9 Bureau of Labor Statistics, US Department of Labor, Occupational Outlook Handbook, 2016-17 Edition, Tellers, on the Internet at https://www.bls.gov/ooh/office-and-administrative-support/tellers.htm (visited July 09, 2017).

12 David H. Autor, “Why Are There Still So Many Jobs? The History and Future of Workplace Automation,” Journal of Economic Perspectives, Volume 29, Number 3, Summer 2015. https://economics.mit.edu/files/11563

QuickLook is a weekly blog from the Deloitte Center for Financial Services about technology, innovation, growth, regulation, and other challenges facing the industry. The opinions expressed in QuickLook are those of the authors and do not necessarily reflect the views of Deloitte.