Are there gender differences in banking behavior? has been saved

Are there gender differences in banking behavior? has been removed

An Article Titled Are there gender differences in banking behavior? already exists in Saved items

Are there gender differences in banking behavior?

New survey data finds men and women differ in their banking attitudes and behaviors—but that the variation is influenced by generation. How can banks capitalize on this knowledge?

There is considerable research on gender differences in financial decision making. A number of studies conclude that women, on average, are less risk-seeking than men.1

Meanwhile, the purchasing power of women in the global economy is increasing rapidly. They account for a significant proportion of consumer spending in the US, and in terms of financial assets, have 40 percent of global wealth.2

But little is known about the dissimilarities between men and women in banking behaviors beyond some generic conclusions. Are women more satisfied with their banks than men? Are men more likely to use digital channels rather than branches when applying for a loan? And what is the difference, if any, in their likelihood of switching banks?

Here I present findings from our global banking survey. (See the articles we have already published on this topic.) I focus on data for the US3 market to control for other factors, such as cultural ones, that may influence gender differences. 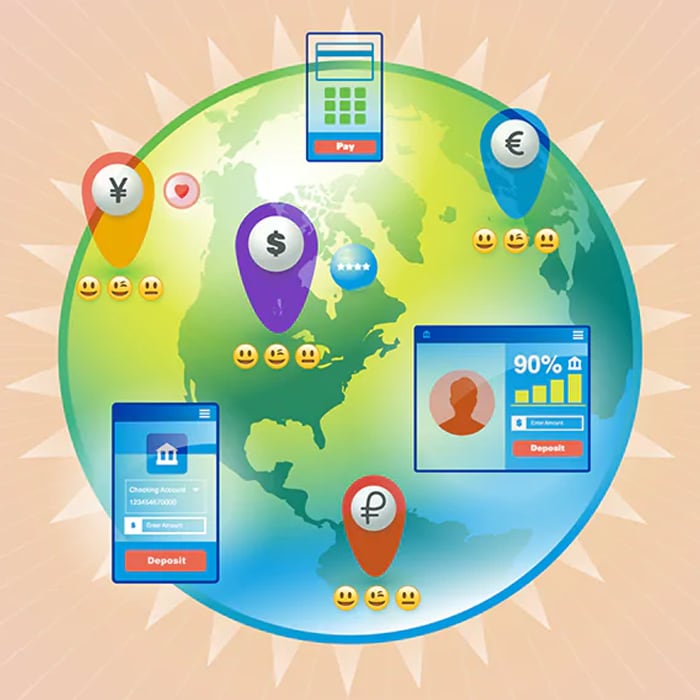 Looking at bank satisfaction by gender

In this survey, first we measured consumers' overall satisfaction with their primary bank (the bank they rely on the most). Overall, there is a meaningful distinction between men and women—77 percent of women versus 73 percent of men are completely or very satisfied (see figure 1). But these differences vary by generation. A greater proportion of Baby Boomer women than Boomer men are satisfied with their bank, but there is no statistically significant gender difference among Millennials. I found this very interesting. Are Millennial women and men more similar in their attitudes and behaviors, compared to their older cohorts? 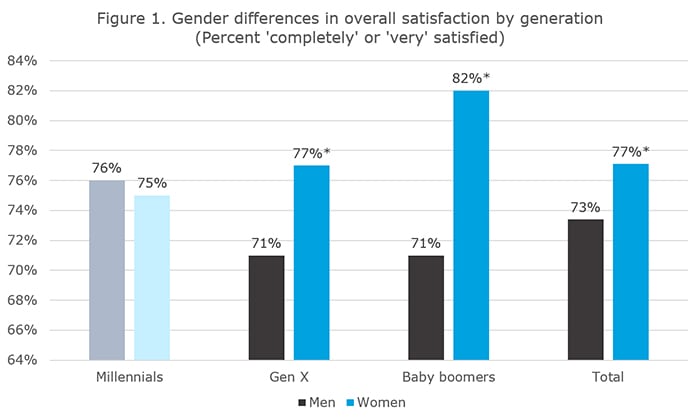 *Note: Differences in the total sample, and among Gen X and Baby Boomers are statistically significant at 95 percent confidence level.

But it appears such a generalized statement cannot be made based on the satisfaction data alone. In looking at switching likelihood (see figure 2), the contrast between men and women is mainly driven by the disparity in the Millennial sample. Millennial men are significantly more likely to switch banks (22 percent) than Millennial women (13 percent) in our study. 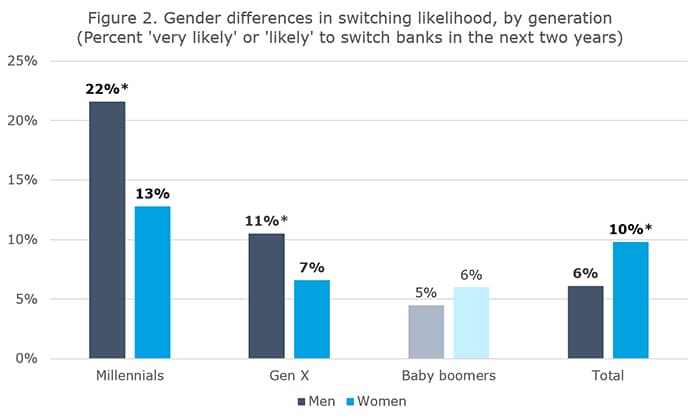 Similarly, while women overall show a greater preference than men to use branches when applying for a loan, the gender variance is starker among Millennials and Gen X (see figure 3). Nearly two-thirds of Millennial and Gen X women prefer to visit a branch, compared to only about half the men in our sample. In contrast, Boomer men and women show the same level of preference, although it is markedly higher than other generations. 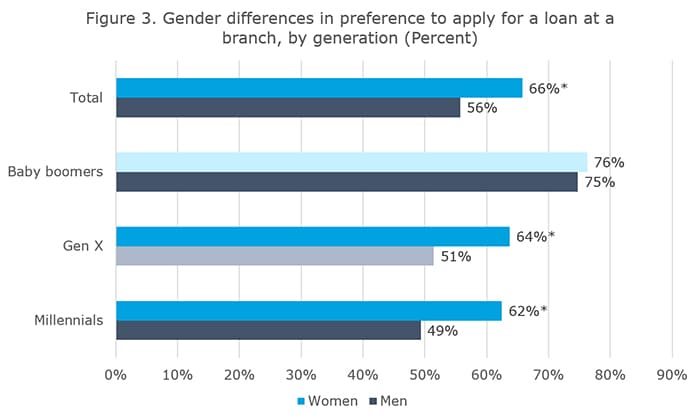 *Note: Differences in the total sample, and among Gen X and Millennials, are statistically significant at 95 percent confidence level. 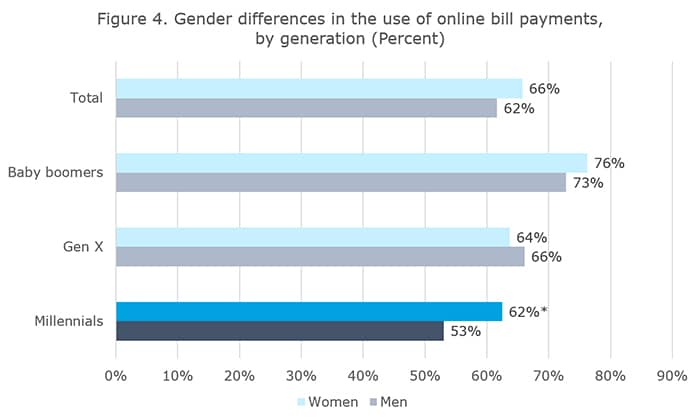 *Note: Only differences among Millennials are statistically significant at 95 percent confidence level.

The above data from our survey indicate that men and women can differ quite a bit in their banking attitudes and behaviors. And, more interestingly, the variation is influenced by generation, but not in a consistent way.

The impact on banks

So, you might ask, what do our findings mean for banks?

It seems to be that banks generally do not adequately account for gender differences overall—and just as importantly—for generational differences among women in the way they market their services. This may well be appropriate if there are no consequential differences in the needs, preferences, and behaviors among different generations of men and women, but our study shows this is not the case.

Based on the above analysis, the main takeaway for me is that the relationship between gender (and age) and banking patterns is real and more complex than the generic stereotypes and cliches currently out there. Banks need to beef up their research and spend more time taking a deeper dive into analyzing these patterns to understand why the discrepancies exist. They can then use that knowledge to better market to and serve these different segments. A deeper understanding of these disparities in behavioral patterns will allow them to better serve their customers, no matter their gender or age.

What are your views on gender differences in banking behaviors? What more should banks do to serve their customers more effectively?

1 Robert A. Olsen and Constance M. Cox, "The Influence of Gender on the Perception and Response to Investment Risk: The Case of Professional Investors,"Journal of Psychology and Financial Markets, Volume 2, Issue 1, June 2012.
2 James Davies and Anthony Shorrocks, "Women and wealth," Global Wealth Report 2018, Credit Suisse Research Institute, Accessed on January 10, 2019.
3 The sample size of the U.S. market in our survey is 2,000.

Insights on the Banking and Capital Markets Outlook