How have US household balance sheets changed since the financial crisis? has been saved

How have US household balance sheets changed since the financial crisis? has been removed

An Article Titled How have US household balance sheets changed since the financial crisis? already exists in Saved items

How have US household balance sheets changed since the financial crisis?

As the United States experiences the longest economic expansion in its history, it seems appropriate to ask: What does the balance sheet of US households look like today, and how has it changed since the financial crisis? And to what degree has there been a redistribution of wealth in favor of those at the bottom of the income pyramid?

The Z.1 Financial Accounts of the United States report from the Federal Reserve can shed some light on these questions.1 Released every quarter since 1952, the Z.1 is a unique and insightful repository of information. It contains balance sheet information, including transactions and levels of financial and nonfinancial assets and liabilities, for major sectors in the economy, including households. The latest release, published on September 20, 2019, contains information through the end of the second quarter of 2019.

The growth in household net worth (difference between assets and liabilities) over the last decade is one of the more striking statistics in the report. From $58 trillion at the end of 2008 (a post-crisis low), household net worth has now reached $107 trillion—an increase of nearly 89 percent. This may not be surprising, given how well the US economy has performed over the past 10 years.

As the chart below shows, the increase in net worth was propelled by a slightly higher growth in total financial assets (such as investments and pension entitlements) compared to the growth in total financial liabilities. Total net worth as a proportion of total assets increased from 81 percent at the beginning of 2009 to 88 percent at the end of second quarter of 2019, a significant increase. 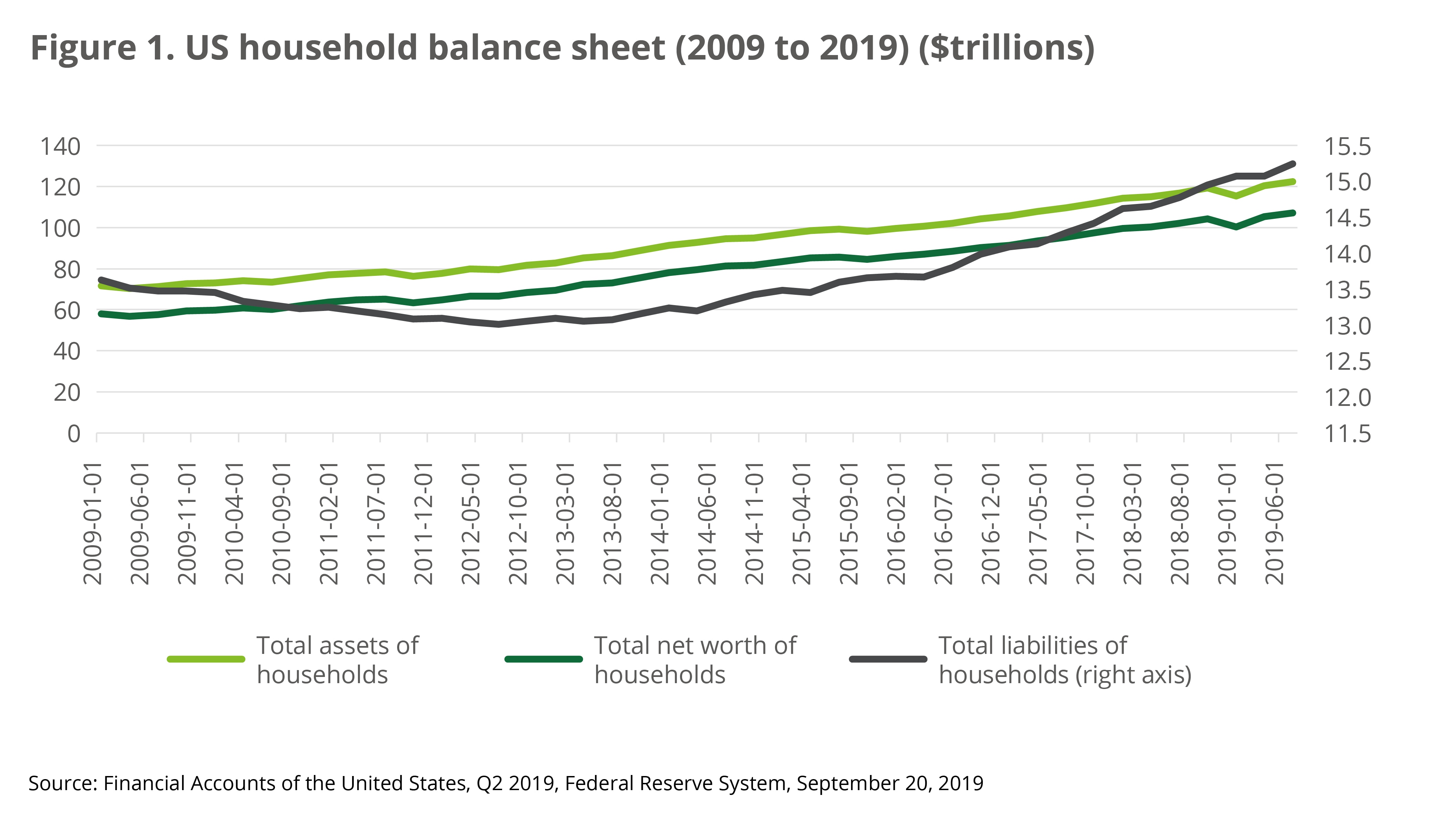 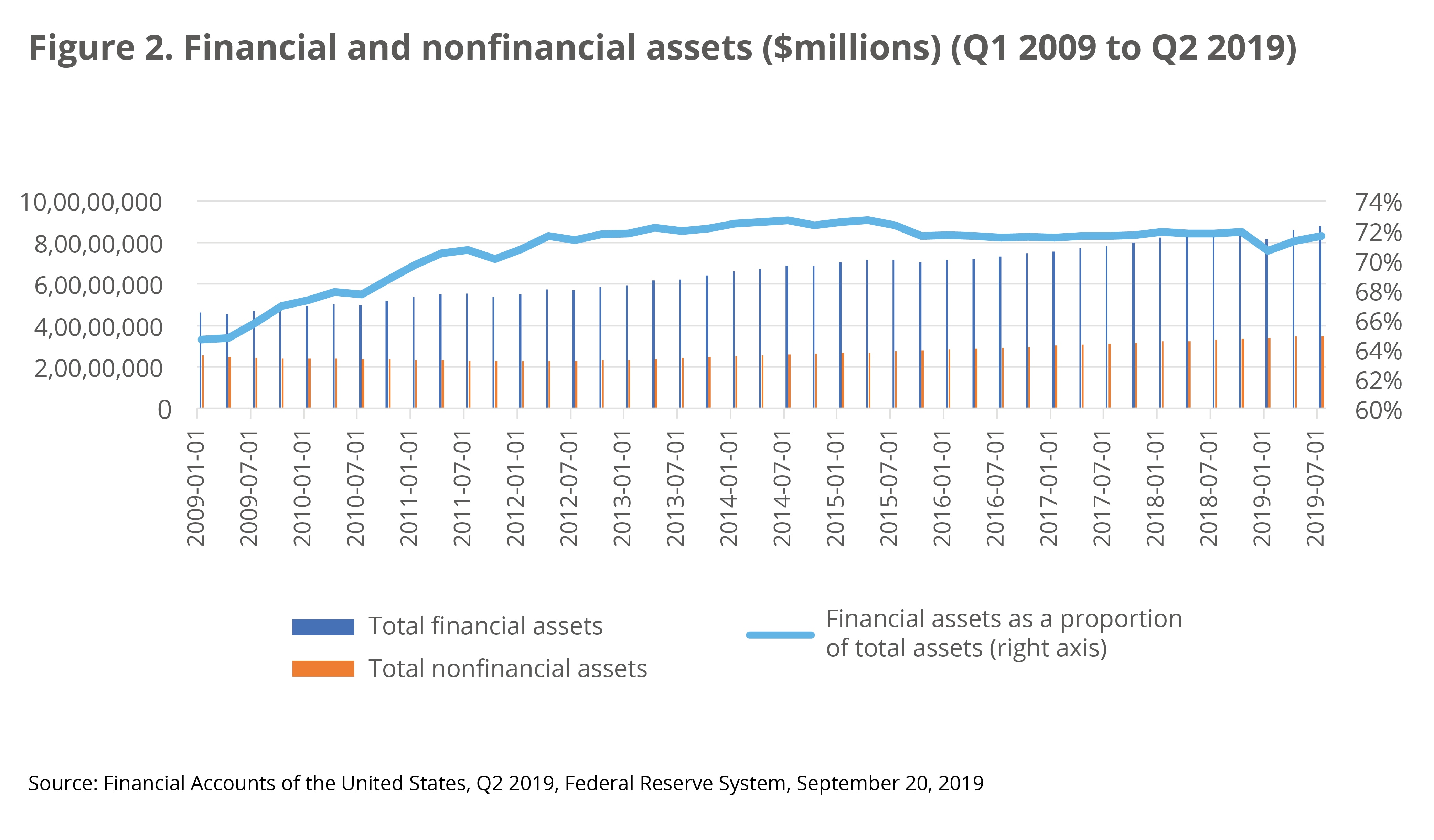 Nearly 31 percent (~ $27 trillion) of financial assets among households at the end of June 2019 was in pension entitlements—with private corporate plans holding 38 percent of the pension liability and public plans, such as municipalities and local governments, nearly half. Investments in equities and mutual funds accounted for 29 percent of financial assets. These investments changed the most in value since 2009, while business equity made up 15 percent and deposits made up 12 percent (figure 3). 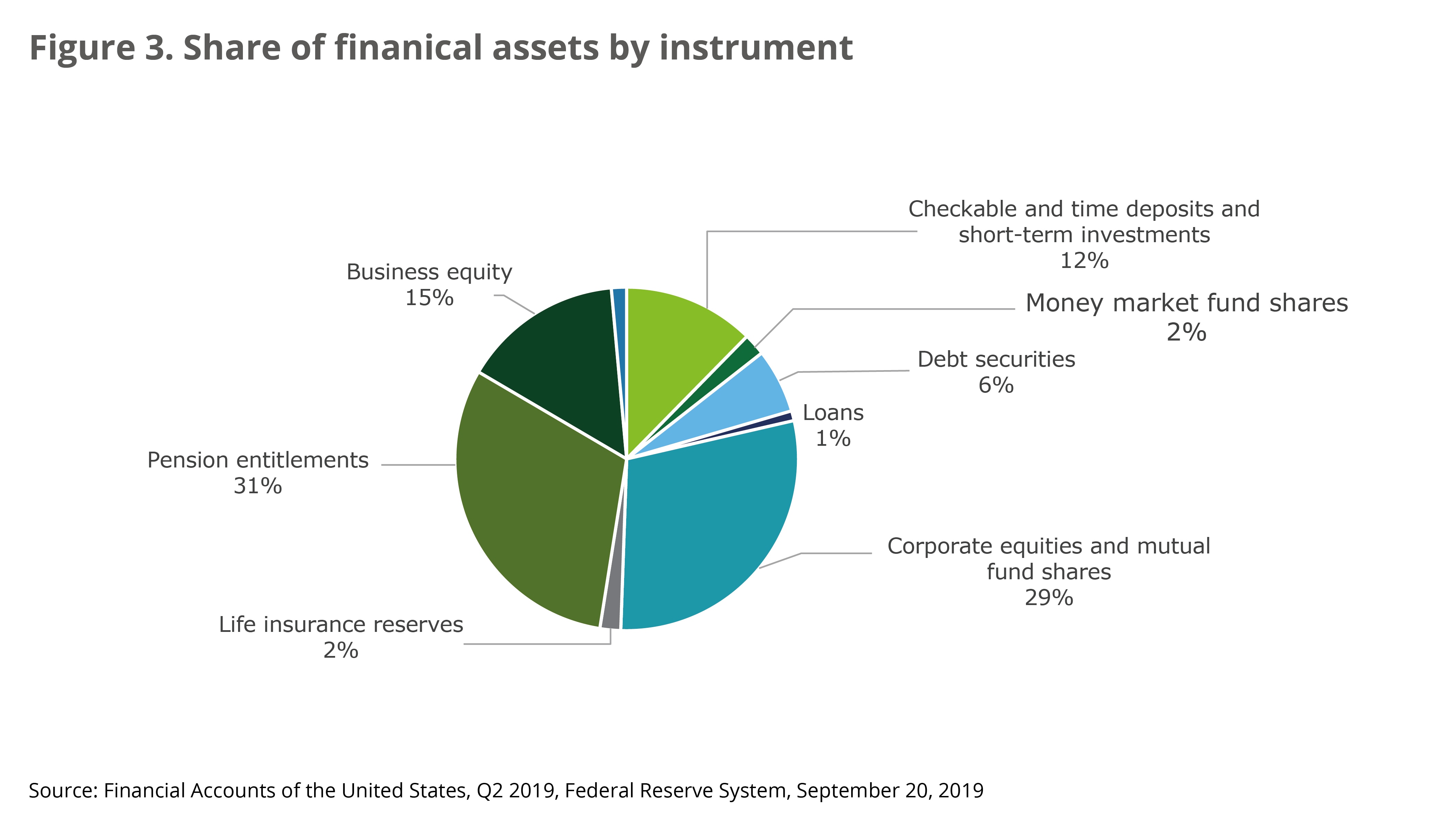 Perhaps not surprisingly, much of the increase in financial assets in the last decade came from appreciation in stocks and mutual funds and business equity. In fact, the former rose by 230 percent ($17.74 trillion), while the latter rose by more than 77 percent ($5.8 trillion) since the end of 2008. If the findings of the last Survey of Consumer Finances3 still apply, the gains in the aforementioned assets should be “broad-based” and evident across the income distribution. Of course, the largest gains are likely to be among the higher-income category, given the higher proportion of equity in their portfolios.

As for nonfinancial assets, the growth has been more modest. The total value of these assets increased only 37 percent from $25.4 trillion at the end of 2008 to $34.8 trillion at the end of Q2 2019. Real estate, not surprisingly, makes up a sizable chunk of this increase—about 88 percent. Real estate’s share of nonfinancial assets was 82 percent at the beginning of 2009, when the home ownership rate was higher. As of July 2019, it stands at 64.1 percent, compared to the peak of 69.1 percent in the first quarter of 2005.4

On the liabilities side, US households increased this component of the balance sheet only by about $1.6 trillion, or 12 percent since the end of 2008, to $15.2 trillion. Interestingly, the bottom 90 percent of the income distribution make up three-quarters of the liabilities. Consumer credit, in the form of revolving credit card debt, auto loans, and student loans, accounted for nearly three-quarters of the increase in household liabilities.5 Student debt expanded the most. It now stands at $1.6 trillion and is more than credit card or auto loans.

Mortgage liability, although making up over $10 trillion, declined by about 1.5 percent in total since the end of 2008. However, since the interest rate drop earlier this year, over $700 billion of mortgage loans (including refinancings) were made in the third quarter of 2019,6 thus increasing this liability in a meaningful way.

This household balance sheet picture, based on the most recent release of the Fed’s Financial Accounts of the United States, suggests that households are in better shape overall. But the figures shown in this article and in the Z.1 are only aggregate and do not show the variation in households’ financial condition.

For instance, according to a recent report on income volatility by the JPMorgan Chase Institute, nearly two-thirds of American families lack a sufficient cash buffer (six weeks of income in liquid assets) to weather a financial emergency.7 This is not an isolated finding, and the unfortunate fact has been documented by several other studies.8 One might say this is particularly shocking given the state of the US economy.

A study by the St. Louis Fed Center for Household Financial Stability, which looked at wealth and demographics such as race, ethnicity, education, and age, concluded that the wealth gap in America from 1989 to 2016 had become “starker.”9 For instance, in 2016, a typical (i.e., median) white family had about 10 times the wealth of a typical black family and seven times that of a typical Hispanic household. Similarly, households headed by someone with a four-year college degree (a little over a third of the families in the United States) had roughly three-quarters of the wealth in 2016, compared to half the pie in 1989. The story is the same among generations as well, with older families having 12 times the wealth of younger families. 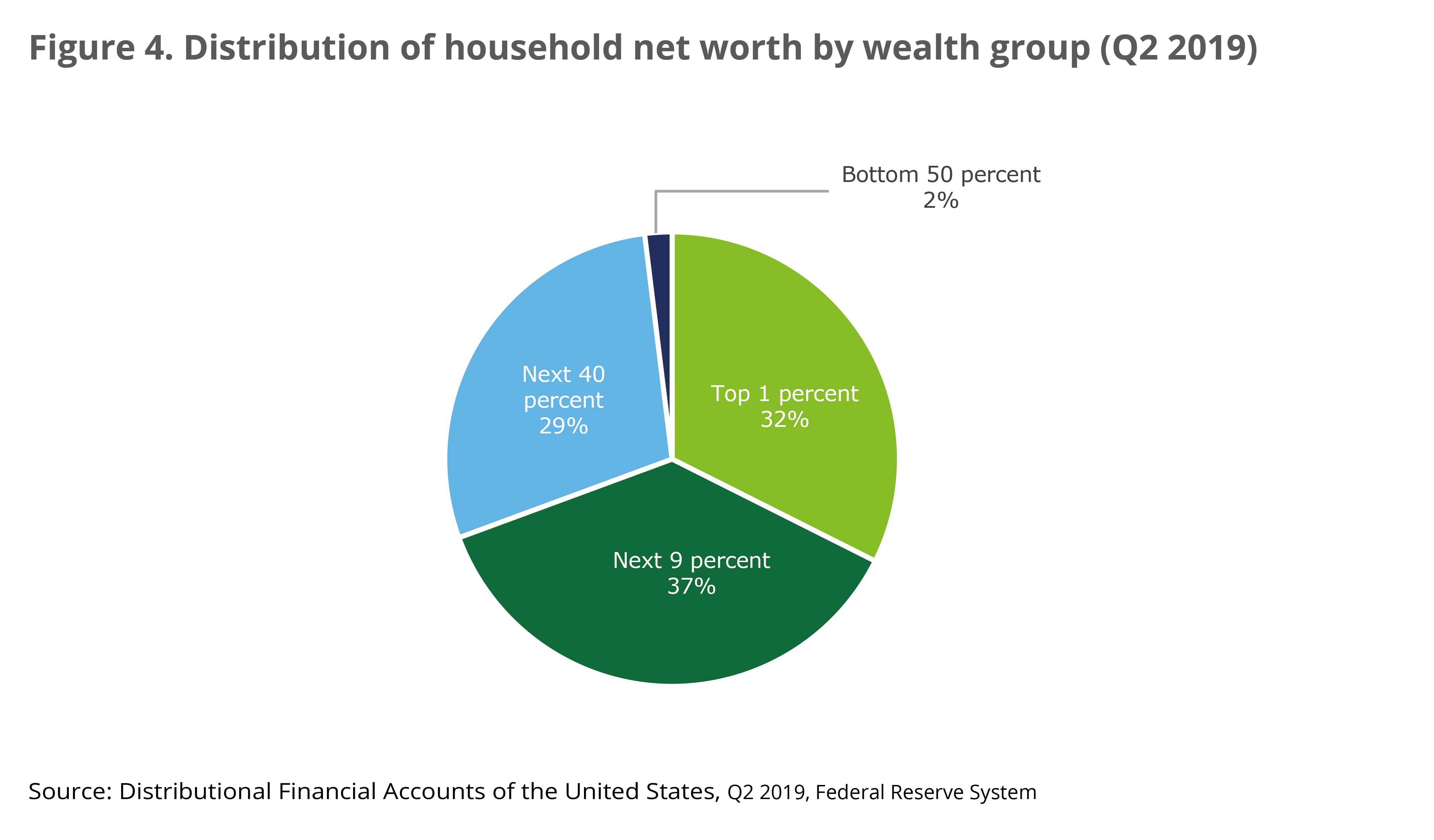 The question one might ask is: In a decade’s time, what could household wealth look like in the United States? And what will wealth distribution look like across the income spectrum? Will wealth disparity get better or worse? Of course, it is difficult to predict the exact outcomes. But based on what we know, here is one scenario.

According to the IMF, US real GDP growth is expected to decline from the current 2.4 percent to 1.6 percent in 2024. Given this prospect, the growth we have seen in household assets and net worth in the last decade may not hold up. Lower interest rates and slower growth in equity prices may further dampen aggregate wealth expansion and possibly worsen wealth inequality.

The other implication for financial institutions serving households is that the future prospects for consumer finance—whether it be managing financial assets through wealth management services or lending to households on the liability side—may not be as bright as the last decade. Now seems the time to refine their market strategies and further drive product and service innovation to remain competitive in the future. These may include new services in the areas of nonfinancial assets, debt management, and financial inclusion.

What does the balance sheet of US households look like today, and how has it changed since the financial crisis?