InsurTech at a crossroads: Launches stall, funds keep flowing has been saved

InsurTech at a crossroads: Launches stall, funds keep flowing has been removed

While the number of InsurTech startups has decreased in the last year, investment and acquisition activity has continued to surge for established InsurTech companies.

The stampede to get in on the ground floor of the InsurTech craze over the past decade may have passed, but the party is far from over for startups that have been around for a few years and have established track records, Deloitte’s latest analysis of investment trends reveals.

Indeed, figures for full year 2018 validate Deloitte’s mid-year assessment, in which we predicted that although the number of brand new InsurTechs launched would dwindle, the money being poured into InsurTech development would continue unabated.1 As you can see in Figure 1, new InsurTechs entered the market at a rate of between 10 and 15 per month from 2012 through 2016, when the total hit its peak of 187. In 2017, however, the number of launches dropped nearly in half, then plummeted to only a handful last year.

Figure 1: InsurTech launches dwindle to near zero
The industry reaches an inflection point as investors reassess their targets 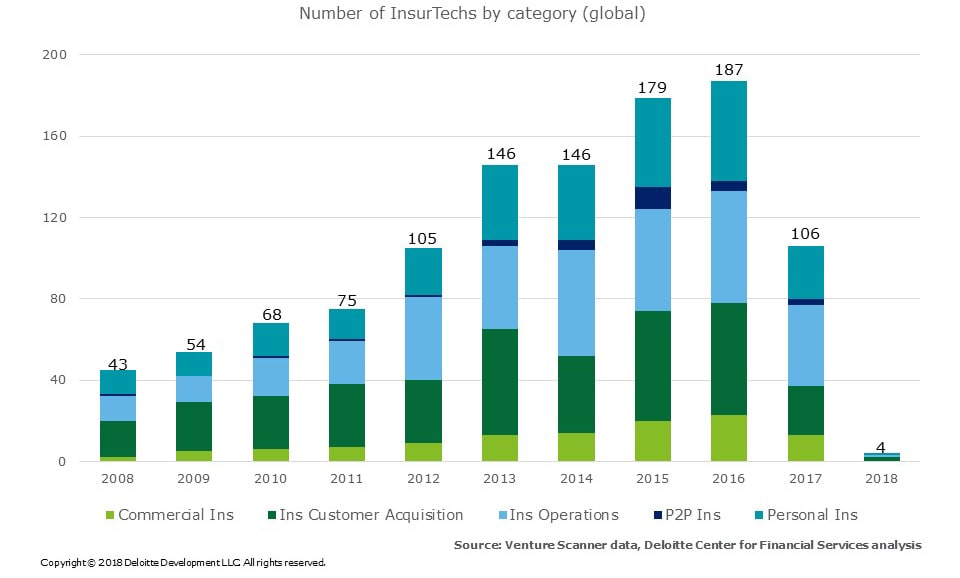 On the other hand, you see in Figure 2 that investors are anything but reticent to keep pouring money into more established InsurTechs. Despite the pause in new startups launched, funds invested in InsurTechs were nearly the same in 2018 as the year before, at around $2.5 billion—the third highest total in the past decade. 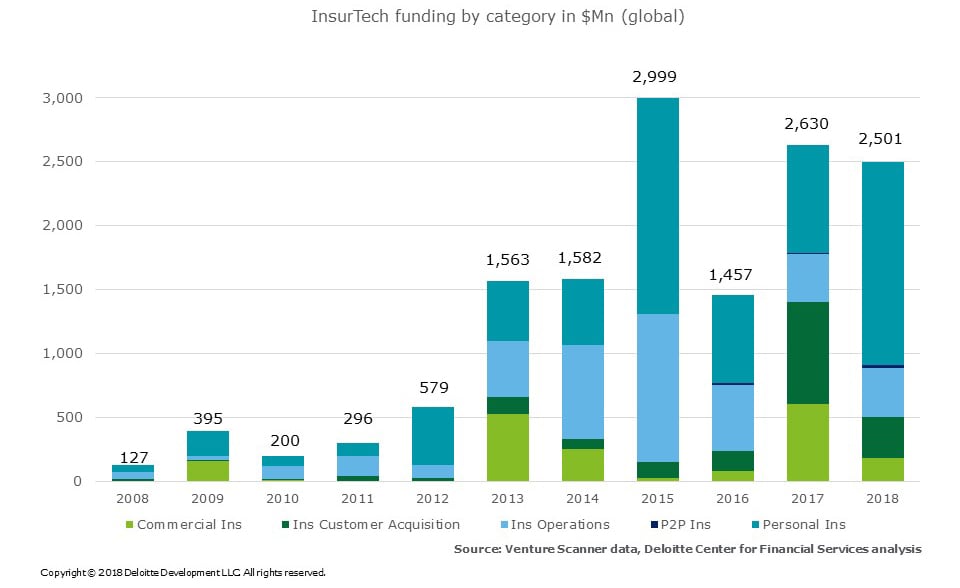 How might these two countervailing trends be reconciled? While investors appear to be done for the moment with brand new InsurTechs, many are starting to double down by making later-stage bets on those that have been around for a few years, and thus are more likely to have gone beyond the drawing board to real world applications and market engagement.

Deloitte’s 2018 midyear report referred to this phenomenon as the “second wave,” as investors reassess existing InsurTechs and begin determining which ones are most likely to succeed long term by achieving scale. This enables investors to make more tactical decisions about where to allocate additional funds to help the most promising candidates reach the next level.

Although these trends are likely to persist through 2019, there may yet be a growth spurt in launches down the road in areas where development have thus far lagged—commercial coverage, life insurance, and annuities.

Last year, nearly two-thirds of total InsurTech investments went into the personal lines space (mostly auto and homeowners insurance), which historically have drawn the most funds overall in the past four years. That’s not a surprise, given that private passenger auto insurance alone accounts for 40 percent of all property-casualty premiums written, based on 2017 industry totals provided by the Insurance Information Institute.2

However, lessons learned from the personal lines space in InsurTech—particularly in terms of direct distribution options for consumers, as well as underwriting and claims capabilities—may be applicable to the small business, life insurance, and annuity segments, thus opening the door for new startups dedicated to those neglected lines.

One other factor to consider is merger and acquisition activity, which quieted down a bit but may be poised to pick up considerably in the years ahead. The number of deals fell from a peak of 39 in 2017 to 25 last year—still the third-largest total. That decline may be short-lived. Given the pause in startup activity and investor emphasis on performance over potential, the third wave in InsurTech is likely to feature consolidation. Duplicative or complementary InsurTechs are more likely to merge or be acquired by competing startups or legacy financial services companies, while a growing number may cease operations if they cannot compete for additional financing, particularly if they do not offer anything tangibly different from the rest of this crowded market.

This is neither a negative nor a positive turn of events, but part of an inevitable culling and shakeout process after a decade of explosive InsurTech proliferation. Think of it as a game of musical chairs, with the music representing investment dollars. It appears the music has stopped, or least paused, for the majority of those looking to launch brand new InsurTech startups. The question is, who among the existing players will prove themselves worthy of further investment or acquisition, thereby earning a seat in the new InsurTech ecosystem?

How do you think InsurTech companies are being affected by shifting investment activity?