Millennial banking has been saved

Millennial banking has been removed

You might be one of those people getting a bit weary of hearing about Millennials and banking. If that’s the case, I am completely sympathetic. I count myself in that category as well. After all, there is no dearth of reports and articles on how Millennials are different from other generations, and what banks should do about it.

A simple web search will confirm this claim: there are close to a million results that come up when you look for Millennials and banks/banking.

As an American Banker article last year said, “you're forgiven if you're a little confused on what to do with millennials given the seemingly endless—and often conflicting—research released about the younger generation's attitude toward financial institutions.”1

On the one side, there are many studies that suggest Millennials, compared with other generations, are more skeptical of and less loyal to banks. This research obviously gets a lot of press and serves as endless fodder for debate at industry conferences, as you can imagine. And on the other side, there is empirical research that shows Millennials might not be that different after all. Unfortunately, this doesn’t get as much attention as it deserves.

Don’t get me wrong. There are many facts about the Millennials that, by now, everybody understands: there are more of them than any other generation (close to 80 million), they are more digitally savvy, and they have a different set of values.

But at the risk of adding to the cacophony, let me share some findings from a robust research study we did at the Deloitte Center for Financial Services recently. I won’t get into all the findings in this blog post, but let me highlight a few that I believe bust some myths about Millennial banking.

In my view, nothing could be further from the truth. Our survey revealed that, compared with some other industries, banking is in fact viewed more favorably (see figure 1). For instance, 46 percent of Millennials thought banks provide “good value for money” (more so than other industries we included in the survey). Furthermore, banks are also seen as more transparent in their pricing by more of the Millennials (37 percent). 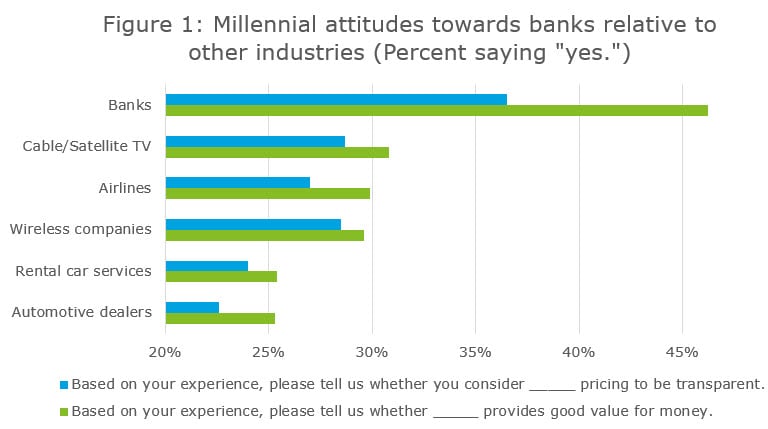 Another myth that is quite pervasive is that Millennials are less happy in their banking relationships compared with older generations. Once again, our survey shows otherwise. When asked how satisfied they are with their primary bank, 95 percent said they are “very satisfied” or “satisfied.” And about the same number said they are likely to use their current bank as their primary bank. Most strikingly, there are no generational differences.

An additional finding relates to the perception of value Millennials receive from banks. As figure two shows, nearly three in four in the 18-35 age group think their primary bank “offers excellent value for the fee” they pay for their checking account, and for this, there actually is a difference among the generations: Millennials see more bang for their buck than older cohorts. 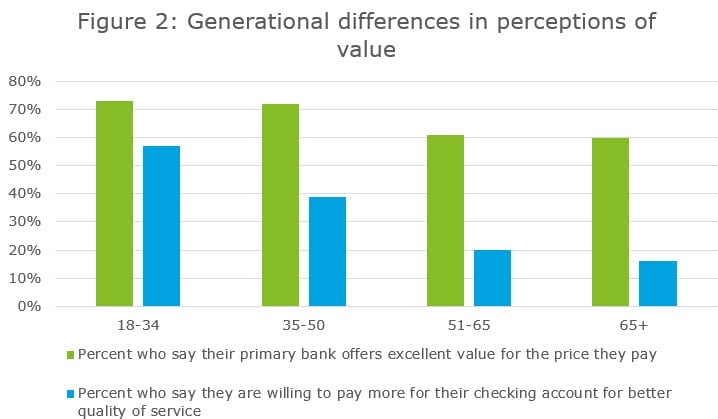 Another argument about Millennials is that they are more price-sensitive. Once again, our survey results show otherwise. More than half the Millennials are willing to pay more for their checking account for quality of service in return.

It is certainly true that many Millennials don’t visit bank branches as often as older cohorts, but this doesn’t mean they don’t see a need for them. According to the survey, having many branches is a “must have” for more Millennials (35 percent) than for other generations (31 percent among Generation X). (See figure three.)

Our study also shows that more Millennials believe that a bank with a recognizable brand is a “must have” (figure three). Once again, this might be contradictory to other studies. 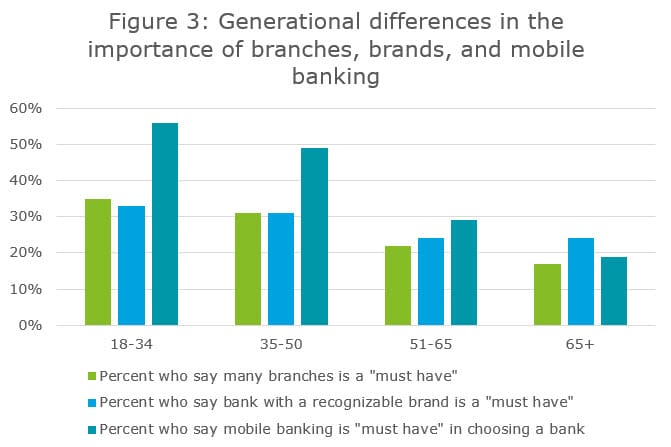 I think by now you follow what I am trying to say here. Unfortunately, there are a number of assumptions made about Millennials that come from jumping to conclusions based on Millennials’ known comfort with digital technology and high demands for a heightened customer experience. I would just caution you to be more skeptical about what you hear about Millennials as consumers and delve into the specifics first.

That said, what is clear from our study, and perhaps many others as well, is that more than anything else, Millennials are indeed comfortable with digital technology and do want a better customer experience, including education about different products. In our survey, nearly 60 percent of Millennials expressed a strong desire more education, compared with only 43 percent among Generation X. This is where I personally think that banks can up their game tremendously and connect with customers eager for their services.

But in all aspects of service, I hope that bankers look at various research studies on Millennials and banking with a more critical eye.

What are your views? Do you see other myths out there about Millennials and banks?

1 Bryan Yurcan, “What Do Millennials Want from Banks? Everything. Nothing. Whatever.” American Banker, March 16, 2016. https://www.americanbanker.com/news/what-do-millennials-want-from-banks-everything-nothing-whatever

Mobile wallets are a growing destination for digital “default” payments