Moving labor-intensive manufacturing outside China will create an opportunity for low- and middle-income countries.

The US-China trade war, climate change, and the global pandemic have disrupted international trade and are forcing businesses and governments to rethink global supply chains. Previously, supply chains were designed to keep costs low and inventories lean. Now, however, supply chains are being reworked to reduce the risks of future disruptions even if doing so means added costs.1 With China being by far the world’s largest goods exporter and mired in a trade war with the United States, supply chains going through China may be among the most vulnerable to future disruption. Rerouting the supply chains for high-tech and research-intensive goods will likely be part of the story. However, economic and noneconomic forces are making China’s sizable labor-intensive manufacturing particularly vulnerable to disruption, creating an opportunity for low- and middle-income countries as well as for China.

When it comes to producing high-tech goods, much attention has been paid to China moving up the value chain and competing with some of the world’s richest countries. Additionally, China continues to produce the largest share of the world’s labor-intensive exports. Using a definition laid out in a paper by the International Monetary Fund (IMF),2 we estimate that China’s share of labor-intensive exports grew from 13.9% in 2000, a year before it joined the World Trade Organization, to 26.9% in 2018, about where it had been for the preceding four years. That share is larger than the next five biggest labor-intensive goods exporters combined.

China’s ability to hang onto such a large share of the world’s labor-intensive export production may come as a surprise.

One possible explanation for China’s ability to hang on to its production of labor-intensive goods is that production could move from the coastal areas where wages are highest and toward inland provinces where wages come at a larger discount. Indeed, there is anecdotal evidence that this has occurred.5 However, the export data casts doubt on this narrative. About 82.1% of all China’s goods exports came from China’s eastern provinces6 in 2018, down only slightly from 85.6% in 2000.7 Given that labor-intensive goods account for roughly one-third of China’s total goods exports, movement to the interior cannot explain China’s ability to continue to produce these goods.

Perhaps a better explanation for China’s ability to continue to export labor-intensive goods is productivity growth. Although we do not have detailed information on China’s productivity growth, we can get some sense of it by looking at the annual statistics on revenue and employment by sector. Using this information, we estimate that productivity gains in the labor-intensive sectors of textiles, apparel, and footwear have made up for the manufacturing wage growth in the largest exporting coastal areas at least between 2010 and 2016. For example, manufacturing wages in the three largest exporting provinces in China grew between 11% and 14% per year between 2010 and 2016. Productivity growth for textiles, apparel, and footwear in all of China over that same period grew between 14% and 15%. This allowed related employment to fall even as revenues continued to rise.11

Perhaps a better explanation for China’s ability to continue to export labor-intensive goods is productivity growth. 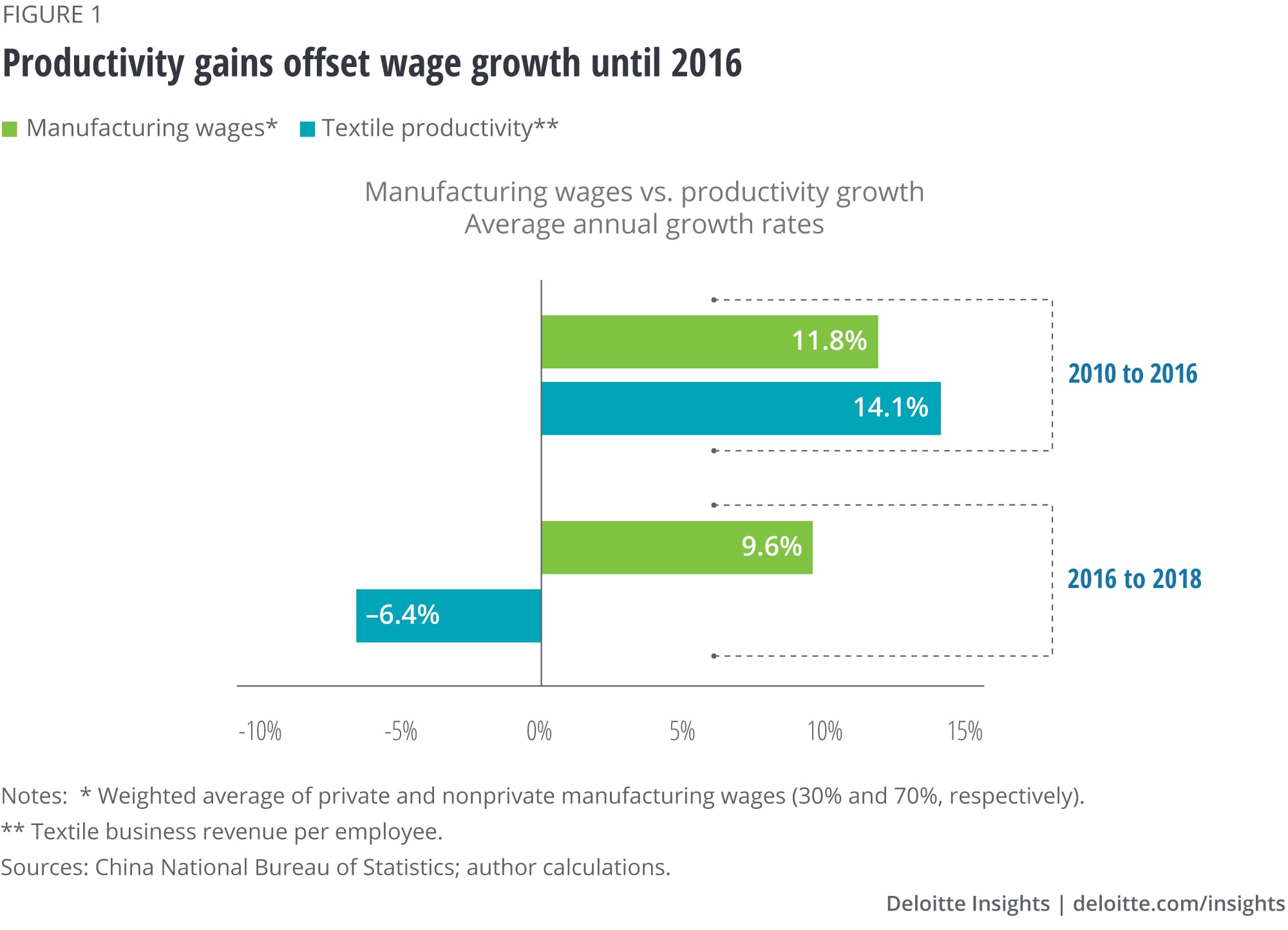 Productivity growth helps explain how China was able to compete globally despite rapid wage increases. However, productivity in these three sectors declined in 2017 and 2018 while wages continued to rise, raising questions over how sustainable China’s exports of labor-intensive goods are. China began to lose market share for some labor-intensive goods exports—in 2015 for apparel and in 2016 for footwear. Although China continued to maintain or even capture additional market share for other labor-intensive goods exports, the combination of higher wages and lower productivity growth suggests that China may struggle to remain competitive in international markets for more such goods.

Noneconomic forces will also encourage more production to be located outside of China. For example, Japan’s concerns over supply disruptions of critical goods during the pandemic has caused it to implement a policy to incentivize Japanese companies to move production away from China and toward ASEAN countries. Some of Japan’s focus has been on research-intensive goods, such as semiconductors and pharmaceuticals, but it also covers labor-intensive goods such as medical clothing.12 One study found that a third of global supply chain leaders had already moved some business out of China or planned to do so by 2023, in part due to the pandemic’s disruption and higher tariffs from the trade war.13

In the United States, the ongoing trade war had already reduced imports from China even before the pandemic struck. High-tech goods received the most attention, but labor-intensive goods trade between China and the United States also waned. For example, US imports of leather and allied products, including footwear, from China fell nearly 35% for the 12 months through August 2020 relative to the prior 12 months. US imports of those goods from the rest of the world fell only about 7% over the same time period. We see a similar pattern when looking at other labor-intensive goods, such as textiles and apparel.14

Advantage everyone if labor-intense production moves away from China

With both economic and noneconomic forces pushing labor-intensive production outside of China, several other nations stand to benefit. China’s labor-intensive goods exports were valued at more than US$800 billion in 2018 so even relatively small shares of that production could have a significant positive effect on low- and middle-income economies. India is particularly well-positioned to absorb some of China’s labor-intensive production. It is already the second-largest exporter of textile yarns and among the largest exporters of apparel and clothing accessories. Plus, the relatively large size of its economy would allow for a larger share of production to be absorbed quickly. Given their already-sizable participation in apparel exports, Vietnam, Turkey, and Bangladesh are well-equipped to absorb apparel manufacturing. Similarly, Czechia, Poland, and Mexico are better equipped to absorb labor-intensive production of metals and miscellaneous manufactures, which includes plastic parts and toys.15 Czechia and Poland also have free access to the large European market, while Mexico has access to the large US market.

China recognizes the importance of raising domestic demand and reducing reliance on foreign production of technology.

Moving labor-intensive manufacturing from China to low- and middle-income countries could ultimately benefit everyone. Recipient countries would gain higher manufacturing production and exports. Plus, China will be more capable of achieving its goals of greater domestic consumption if it allows more labor-intensive production to move elsewhere. Moving production to lower-wage countries could also keep prices down for global consumers, while reducing supply-chain disruption risks associated with overreliance on one country for sourcing goods.

Moving labor-intensive manufacturing from China to low- and middle-income countries could ultimately benefit everyone.

Despite light at the end of the tunnel, there are postpandemic risks

Are we out of the woods? - Vaccinations and future waves

Chain reaction has been saved

Chain reaction has been removed