While drug discovery has led to many life-saving and life-enhancing clinical treatments, it is also a long, expensive and often unsuccessful process, with many areas of unmet need. AI-enabled solutions are transforming the process and enabling the development of more precise targeted treatments. This is shifting health care towards a future where medicine is more personalised, predictive, preventative and participatory.

Read the first article of the AI in Biopharma collection

The majority of drugs discovered during the 20th century were chemically synthesised small molecules, which still make up 90 per cent of drugs on the market today.2 Their advantages include simple manufacturing and administration routes. They also have low specificity and a stable shelf life, meaning they are safe and effective for large groups of people. However, low specificity can also lead to side effects, reducing the chances of success in clinical trials.

Since the 1990s, scientific and technological advances have led to the discovery of larger, more complex, biological therapeutics known as biologics, which are highly specific to their target. Biologics have invoked high levels of media and investor interest due to their innovative techniques and potential to cure previously untreatable diseases. In 2018, 17 of the 59 drugs approved by Food and Drug Administration (FDA) were biologics.

To date, the discovery of modern drugs remains a long, expensive and often unsuccessful process. The average time to bring a molecule to launch is 10-12 years.3 Deloitte’s 2018 report, Measuring the return from pharmaceutical innovation calculated that the average cost of R&D for the top 12 biopharma companies is $2.168 billion per drug – double the $1.188 billion calculated in 2010.4 At the same time, the average forecast peak sales per late-stage asset declined to $407 million in 2018, less than half the 2010 value of $816 million. As a result, the expected return on investment has declined from 10.1 per cent in 2010 to 1.9 per cent in 2018. Finding ways of improving the efficiency and cost-effectiveness of bringing new drugs to the market is critical for the industry.

One way to achieve this is by improving the accuracy, predictability and speed of drug discovery, which currently accounts for around a third of the above costs.5 Of the 10,000 molecules initially screened, only 10 make it to clinical trials.6  Moreover, the chance of success for a compound entering phase I trials, the first phase of clinical testing, is slightly under 10 per cent and has not increased in a decade.7 Given the growing cost of bringing a drug to market, a ten per cent improvement in the accuracy of predictions could save billions of dollars spent on drug development.

A number of AI-enabled solutions are emerging which are crucial for accelerating drug discovery. While these are focused mostly on transforming the process of small molecule research, they are also showing potential in the identification of new biologics such as therapeutic antibodies against cancer, fibrosis and other diseases. The potential of AI to improve the understanding of structures and specificity to the target molecules is due largely to the increasing amounts of structured and unstructured scientific data now available. Deloitte has identified five key challenges on which companies that use AI for drug discovery are focusing their efforts. Finding new drug candidates for disease targets is like finding the perfect key for a specific lock (figure 1). 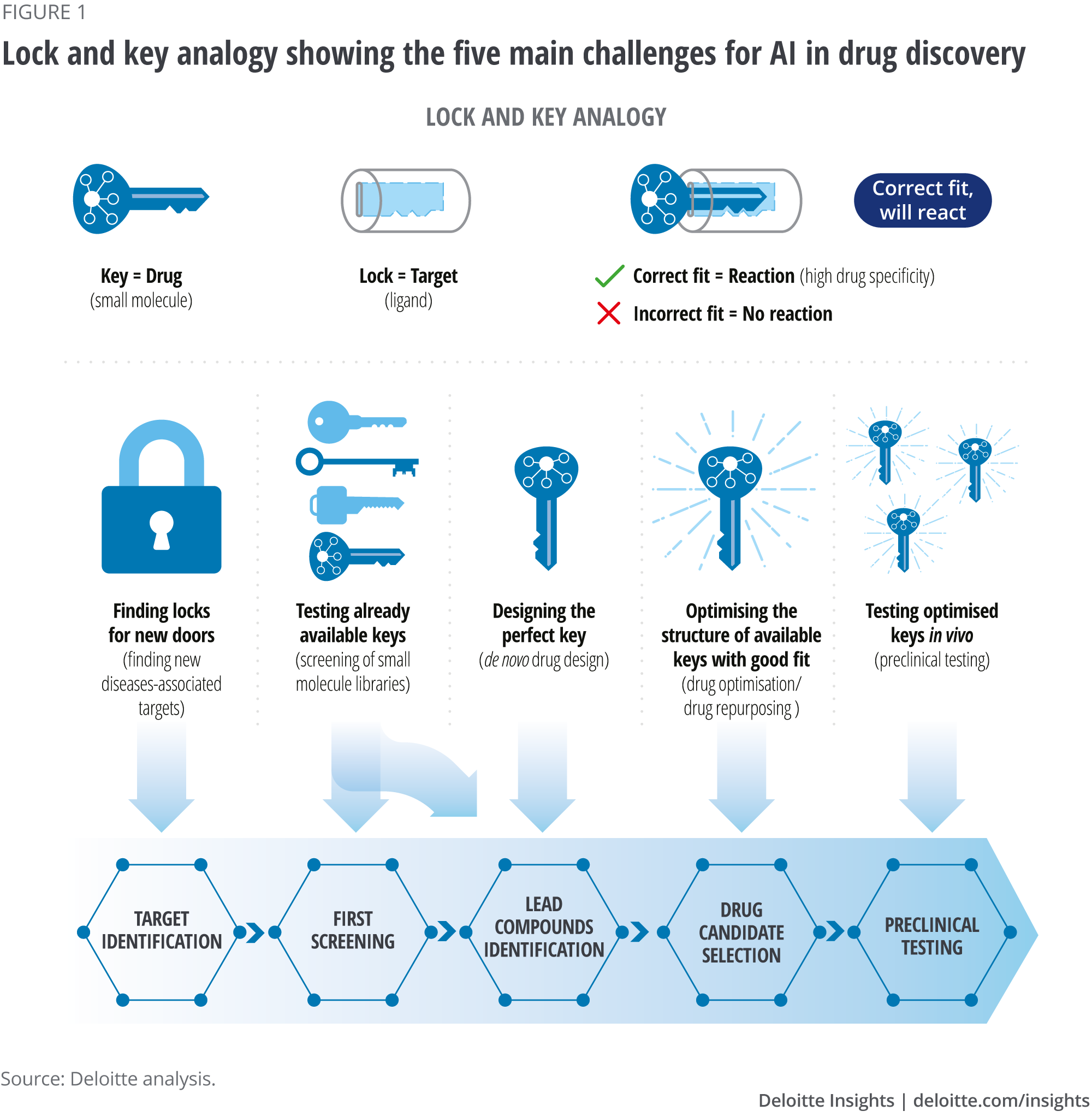 AI algorithms can extract concepts and relationships from data and learn independently from data patterns, augmenting what humans do. AI also helps cross-reference published scientific literature with alternative information sources, including clinical trials information, conference abstracts, public databanks and unpublished datasets. By mining such data, AI applications in drug discovery have already delivered new candidate medicines, in some cases in months rather than years.8 If adopted at the drug-discovery stage, AI solutions have the potential to kick-start the productivity of the entire R&D process.

Biopharma companies need to develop a robust strategy to integrate AI solutions into traditional processes. Deloitte has identified five key consideration to take into account for a strategic adoption of innovation by biopharma companies (figure 2). 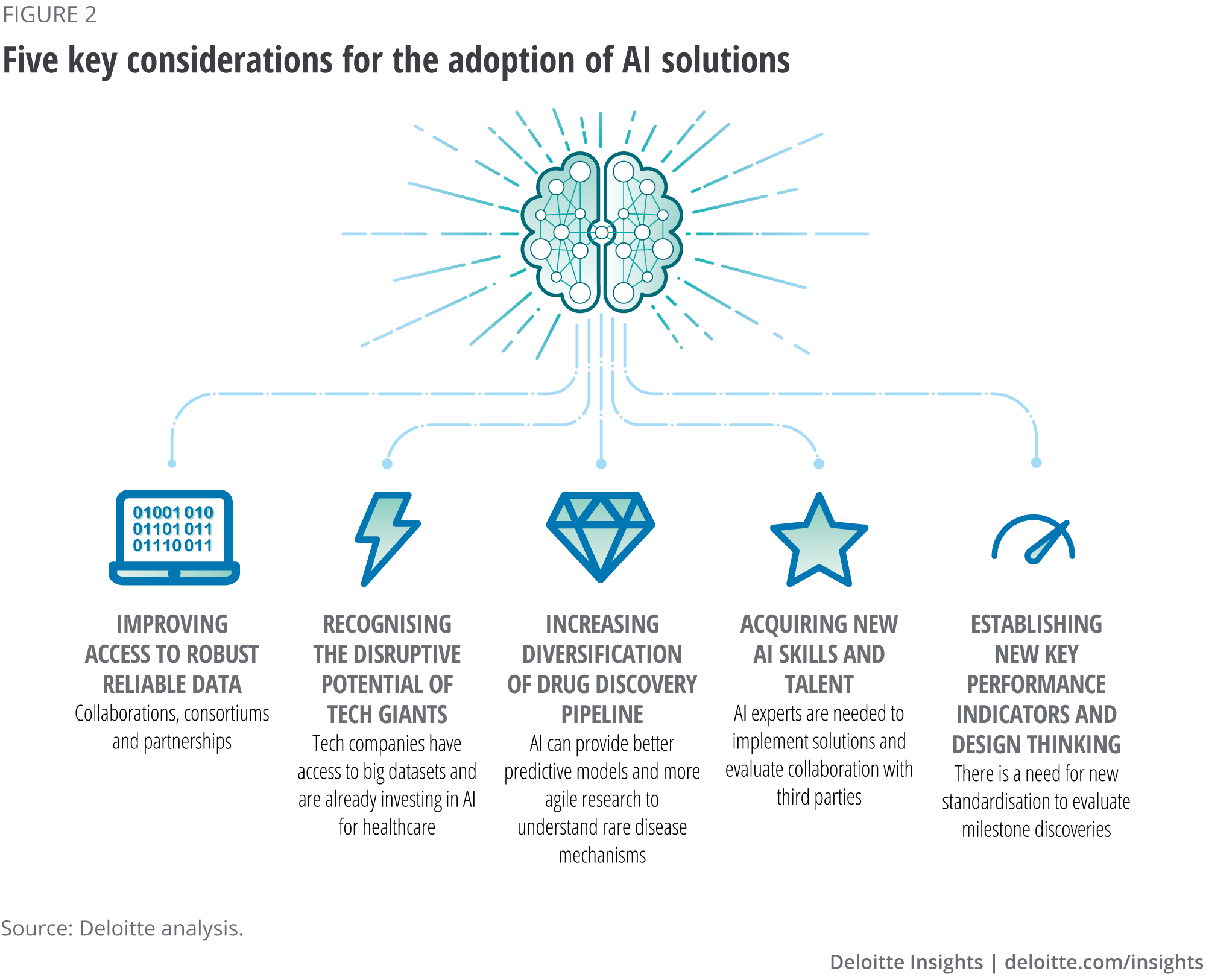 In the past three years, biopharma companies have adopted strategies to integrate AI into the discovery process, such as establishing teams of AI experts and data analysts, investing in startups and creating collaborations with tech giants and/or research centres.9 Deep Knowledge Analytics (DKA) Landscape of AI for Drug Discovery and Advanced R&D Q2 2019 report identifies significant growth in the drug-discovery landscape, (which by 1 July 2019 comprised) 170 AI companies, 50 corporations, 400 investors and 35 major R&D centres. 10 This market has increased from $200 million in 2016 to $700 million in 2018. It is expected to reach $20 billion in the next five years.11

Deloitte believes AI and other innovative technologies using data from multiple sources can enable more precise targeted treatments and will help shift the health ecosystem towards a future where medicine is personalised, predictive, preventative and participatory (figure 3). This will also lead to new, more efficient and effective models of care. Over the next decade, these shifts will have a significant impact on treatments and on patient outcomes, particularly in areas of unmet need.

As the number of compounds identified using AI increases, drugs capable of treating specific pathologies will become available. This transition will open a new future for the health industry, as a higher level of knowledge on disease mechanisms increases the number of treatments available and, in many cases, cures diseases that have not previously had effective treatments.

To thrive, Biopharma companies need strong AI divisions and a strategy for acquiring or collaborating with the best AI start-ups. Leaders with digital knowledge will need to integrate new strategies into research units. Agility and effective communication between departments with interdisciplinary skills in both business and technology will be a strategic asset.

By 2030, an increasing proportion of drug discovery will be done in silico and in collaboration with academia. The timings from screening to preclinical testing will be reduced to a few months and new potential drug candidates identified at increasingly lower costs. A transition that has already begun today.12

Siginificant advances in the techniques used for drug discovery will evolve to provide the framework for precision medicine to become mainstream. Over the next decade, patients can expect these deveopments to have a significant impact on the effectiveness of their treatment options and on disease outcomes, particularly in areas currently with no treatments available. 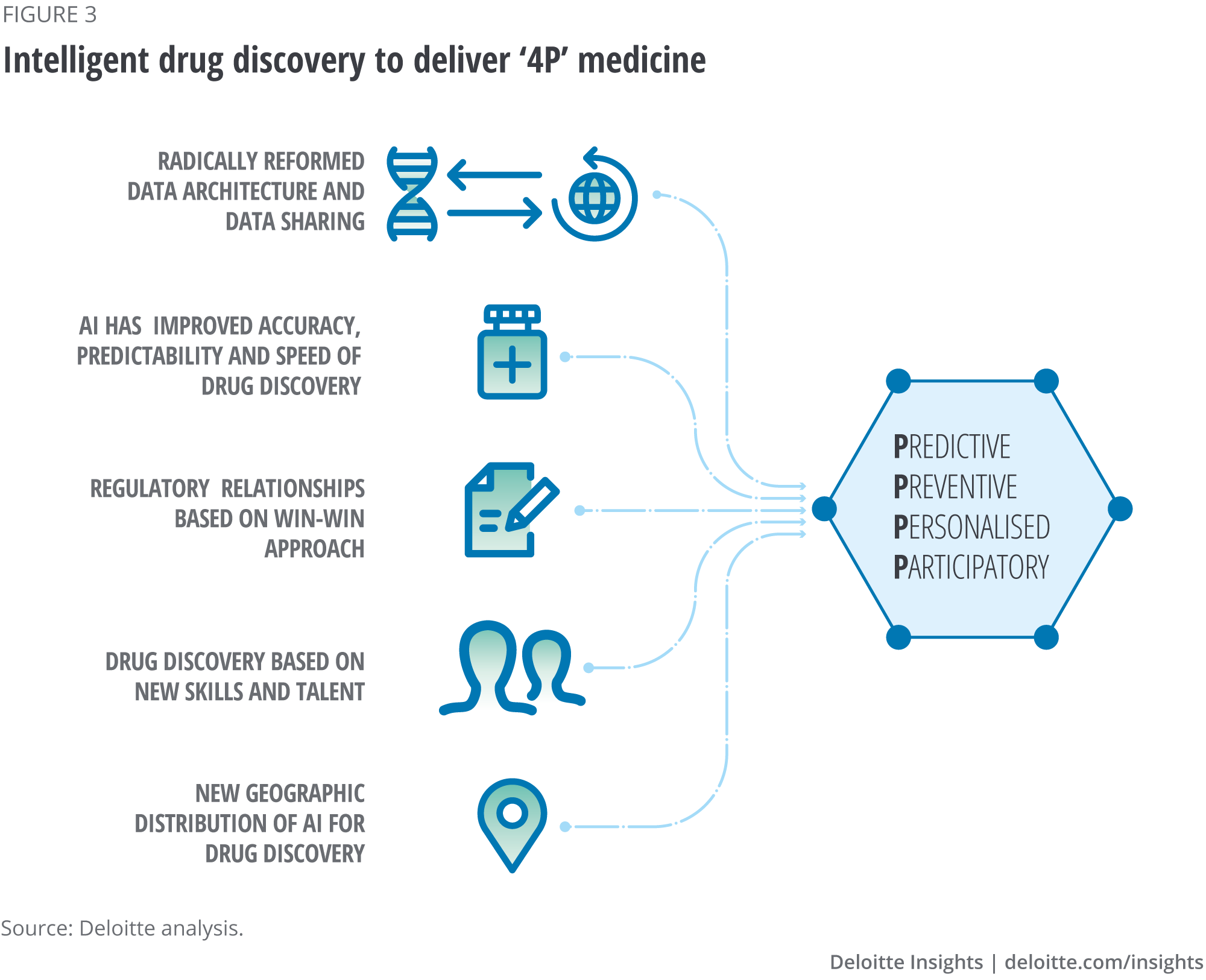 The Deloitte Centre for Health Solutions

The Deloitte Centre for Health Solutions is the research arm of Deloitte’s Life Sciences and Health Care practices. We combine creative thinking, robust research and our industry experience to develop evidence-based perspectives on some of the biggest and most challenging issues to help our clients to transform themselves and, importantly, benefit the patient. At a pivotal and challenging time for the industry, we use our research to encourage collaboration across all stakeholders, from pharmaceuticals and medical innovation, health care management and reform, to the patient and health care consumer. 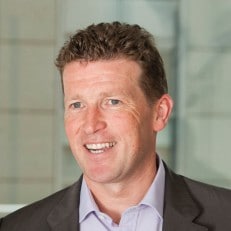 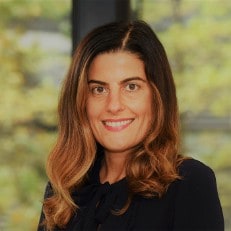 Francesca is a Research Manager for the Deloitte UK Centre for Health Solutions. Before joining Deloitte she was a Principal Investigator at the Italian Institute of Health and lead internationally recognised research on neurodegenerative diseases, specifically on novel diagnostic and therapeutic approaches, filing a relevant patent in the field. She previously a Senior Scientist at the MRC Prion Unit in London and worked on the implementation of a novel cell-based assays for large-scale drug screening. For this research she received an award as best young investigator in prion diseases in UK. Francesca has a PhD in neuronal regeneration from Cambridge University, and she has recently completed an executive MBA at the Imperial College Business School in London focused on innovation in life science and healthcare. 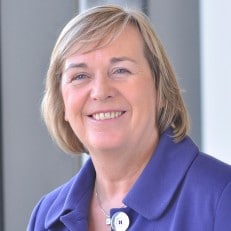 Karen is the Research Director of the Centre for Health Solutions. She supports the Healthcare and Life Sciences practice by driving independent and objective business research and analysis into key industry challenges and associated solutions; generating evidence based insights and points of view on issues from pharmaceuticals and technology innovation to healthcare management and reform. Karen also produces a weekly blog on topical issues facing the healthcare and life science industries. 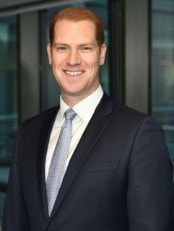 Mark Steedman is a Research Manager in the Deloitte UK Centre for Health Solutions. He supports the Life Sciences and Healthcare and Public Sector Healthcare practices by identifying emerging trends, challenges, opportunities and examples of good practice, based on primary and secondary research and rigorous analysis. 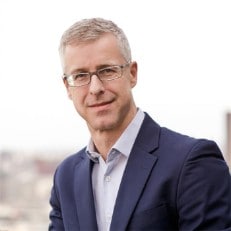 Hanno is a partner at Monitor Deloitte, our strategy consultancy business. He has more than 20 years of consulting experience primarily in the healthcare and life sciences sector. Hanno leads the Life Sciences and Healthcare team in Monitor Deloitte and is responsible for building the ‘Real World Evidence Capability’ within that. His projects have focused on corporate and business unit strategy, competitive response, marketing strategy and capability building.

John Haughey is Deloitte's Global Life Sciences Consulting Leader and the Life Sciences & Healthcare industry leader for the UK. He has extensive experience in the industry as well as more broadly cross sector, having led multiple large scale business and operational transformations over the past 30 years. He has operated across the full project lifecycle from feasibility through implementation. His specialism is in optimising global business operations, covering strategy, M&A integration and divestment, operational and financial improvement, ERP implementation, global business services, analytics and outsourcing.

Intelligent drug discovery has been saved

Intelligent drug discovery has been removed