For the first time since the end of 2014, a majority of Swiss CFOs rate the Swiss economic prospects over the next 12 months as positive. According to the latest Deloitte CFO Survey, the CFOs think that the financial prospects for their companies will remain bright too. Even though the second quarter of 2016 was marked by (geo)political uncertainties, risk appetite is rising again among CFOs. Four weeks after the Brexit vote there are few signs of great nervousness in the Swiss CFO community, although concerns about the possible consequences remain. British CFOs, by contrast, expect the business environment to deteriorate drastically. The stable optimistic trend seen in recent quarters is also confirmed in corporate financial prospects. Nearly half (49%) of CFOs surveyed assume the next twelve months will see a positive trend in business at their company, against 20% who are pessimistic. This figure is slightly higher than in the previous two quarters.

Despite a slight decline, a relatively large majority of 59% are forecasting a further increase in revenues over the next twelve months, with 20% anticipating a fall. Margin pressure remains high, though: 38% expect operating margins will decline, and 26% see them increasing.

Risk appetite among CFOs is also on the rise again for the first time in two years. The great majority (70%), however, remain cautious despite the positive signals and do not believe it is the right time to be taking on more risk. There are also opportunities on offer, though. The reintegration of Iran into the world economy is seen as an example.

"A persistently strong franc, high geopolitical risk and increasing regulatory complexity – companies are not in an easy setting at the moment. But despite the tough external environment, the signals coming out of Switzerland are more positive than in the previous quarters," commented Michael Grampp, Chief Economist at Deloitte in Switzerland. "The Brexit vote will keep external uncertainty at a high level. However, Swiss companies have largely overcome several economic challenges in the recent past, and they will cope with this one too."

Worries about the consequences of the UK leaving the EU were relatively high in Switzerland in the run up to the referendum. The percentage of CFOs polled (prior to the vote) who expect negative consequences for their own company in the event of a Brexit more than doubled to 42%, from 17% in Q1. Only 2% expect a positive impact and 53% see little or no change for their company.

CFOs in the UK expect their economic picture to deteriorate significantly. According to the recent CFO Survey by Deloitte UK (conducted between 28 June and 11 July 2016), 68% of companies expect the business environment in the UK to worsen over the long term; 20% see it remaining as it is and 12% anticipate an improvement. Corporate sentiment has also taken a huge knock: UK companies are more pessimistic about their business prospects than they have been at any time since the Survey was first conducted in 2007.

"The likely departure of the UK from the EU is having a perceptible impact on expected corporate decisions. British companies are now anticipating lower capex, hirings, discretionary expenditure and acquisitions," explained Dennis Brandes, Senior Economic Analyst at Deloitte in Switzerland.

"Naturally, Swiss companies are also concerned about the economic and political consequences of a Brexit, but to a much lesser extent. The UK leaving the EU is likely to have economic consequences, but provided the process runs smoothly, or is even used to boost reforms, these will probably be limited for the Swiss economy and Swiss companies.", says Brandes. 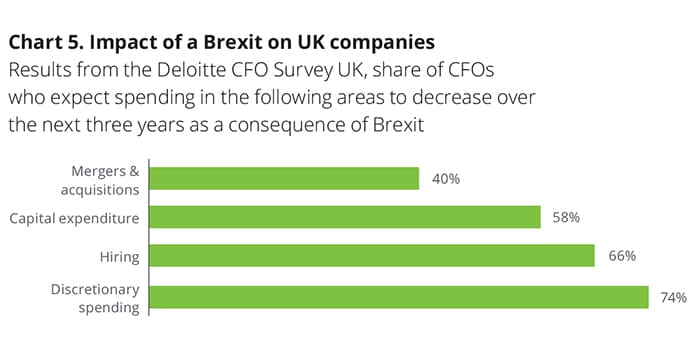 Geopolitical and regulatory risk factors still high on the agenda

In line with last quarter, 69% of Swiss CFOs list geopolitical risk as the biggest factor of uncertainty for their company, followed by increasing regulation (58%) and worries about the strong franc (56%). Financial market uncertainty (40%, up 6pp on the previous quarter) has returned as a significant external corporate risk with the likely departure of the UK from the EU and the associated tumult on the markets. For Swiss companies, the shortage of skilled staff remains the biggest internal factor of uncertainty (48%).

Each quarter, Deloitte in Switzerland conducts a survey amongst Chief Financial Officers (CFOs) and Group Financial Directors. The survey gauges their attitudes towards to outlook for business, financing, risk and strategies, and identifies trends and key themes in the Swiss corporate sector. The Q2 2016 edition was conducted between 30 May and 23 June 2016, with a total of 115 CFOs participating. They represent both listed companies and large private companies from all relevant industries. The Deloitte CFO Survey is the only of its kind in Switzerland.

Deloitte is a leading accounting and consulting company in Switzerland and provides industry-specific services in the areas of Audit & Risk Advisory, Consulting, Financial Advisory and Tax & Legal. With more than 1,400 employees at six locations in Basel, Berne, Geneva, Lausanne, Lugano and Zurich (headquarters), Deloitte serves companies and institutions of all legal forms and sizes in all industry sectors. Deloitte AG is a subsidiary of Deloitte LLP, the UK member firm of Deloitte Touche Tohmatsu Limited (DTTL). DTTL member firms comprise of over 225,000 employees in more than 150 countries.