[Series] What the future holds for Japanese conglomerates

There is a heightened sense of crisis regarding the decline of the Japanese manufacturing industry. In particular, the erosion is significant for conglomerate companies (companies that have multiple businesses with different products and services) that focus on the infrastructure industry, and there is confusion amidst the storm of changes in the competition environment and social transformation such as sustainability and digitization. In this series, we would like to post about various topics as a series from the perspectives of experts in each area to revitalize Japanese conglomerates. 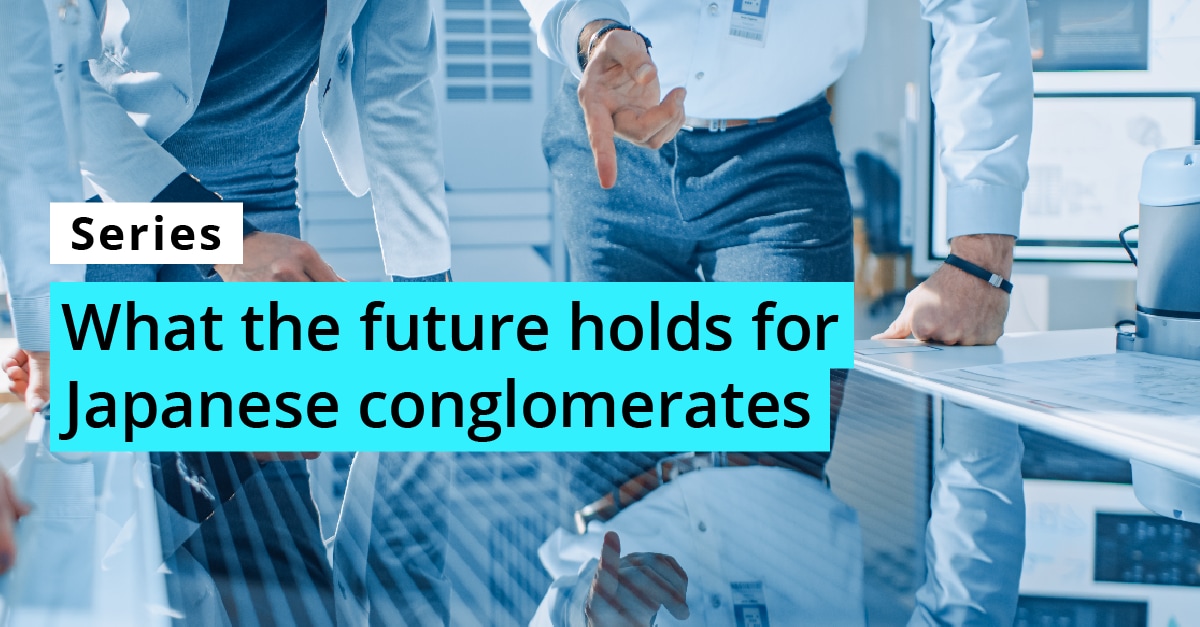 In the previous chapter, we discussed three factors that have contributed to the beginning of the decline and erosion of Japan's manufacturing industry.

If we were to slightly reword factors (1) and (2), this is how they would look:

1: The sharp decline in the presence of Japan’s industries on the global market

2: Outdated strategic thinking based on optimistic business forecasts and past successes

3: Decreased competitiveness due to the postponed resolution of substantial issues

There is a large number of Japanese companies that are experiencing the aforementioned issues (1 through 3). We have defined this state as the Japanese Discount. 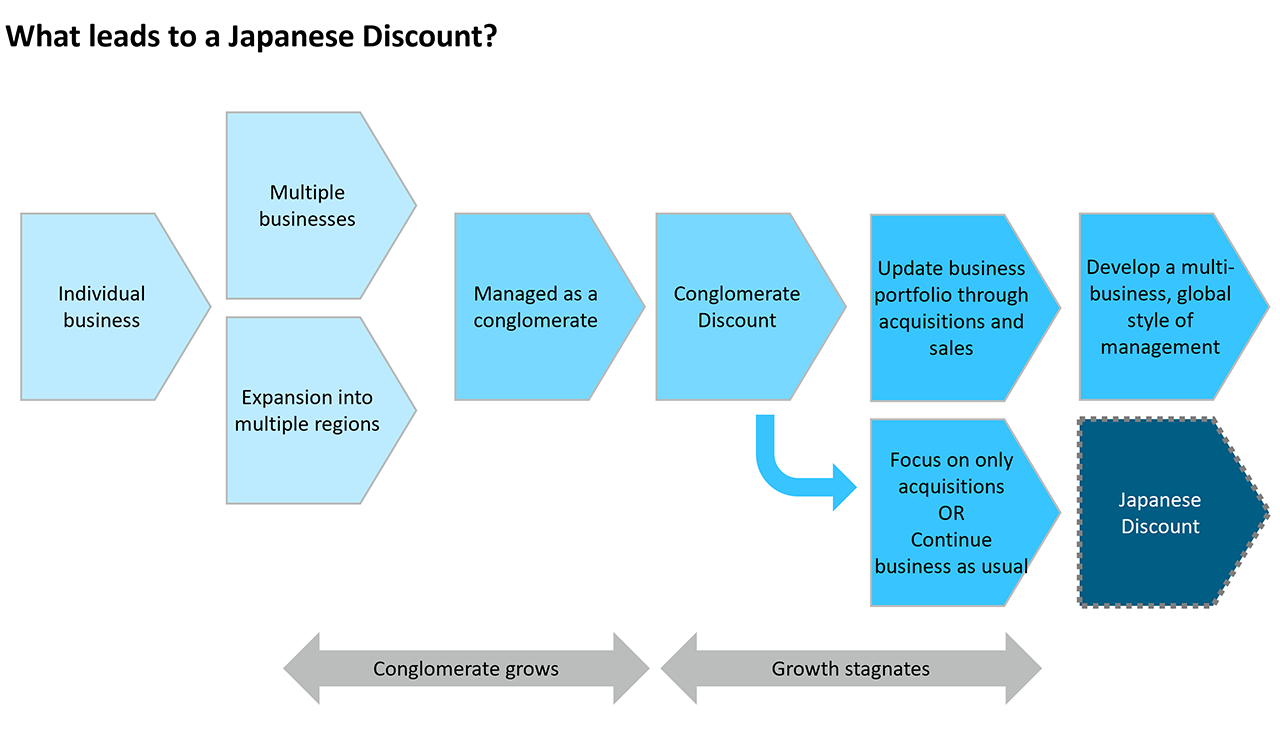 ※Click or tap the image to see the enlarged version

All companies start off with a single business operating out of a small factory. These companies more or less then begin to develop into conglomerates from a business or regional perspective by either diversifying into multiple business, expanding overseas, or doing both. Even single business companies expanding into multiple regions with the intention of doing business independently in each region could also be defined in a broad sense as a type of conglomerate in the sense that these companies are similar to companies that operate multiple businesses. In the midst of this expansion, companies looking to expand in a haphazard manner with rapid growth in mind without exerting some level of global or group control will inevitably encounter the Conglomerate Discount. When this happens, these companies will see their growth plateau.

Many companies regard this plateau as the limit of their organic growth and seek out further growth by making aggressive use of acquisition strategies. However, some Japanese companies are experiencing the Japanese Discount as a result of declining sales in their existing businesses and an inability to easily liquidate unprofitable businesses, which as lead to further damage to their group’s value.

In addition, any company that has multiple business units and manages the performance of these units on an individual basis has the potential risk of encountering the Japanese Discount. We wrote in the above paragraphs how the Japanese Discount could be summarized into three states. In the following paragraphs, we will focus on and break down each of these states.

Taking into account the attractiveness of the Japanese market and the fact that Japan has seen itself become an impoverished nation, we do not expect overseas companies to view the pursuit of the Japanese market as a high priority. However, if Japanese companies are serious about targeting overseas markets for growth and expanding their global business, they must take immediate action to address the Conglomerate and Japanese Discounts.

2: Outdated strategic thinking based on optimistic business forecasts and past successes

If you step out onto the global market, you will find excellent companies lying in wait as competitors that have been taking action since the early 2000s to address the aforementioned discounting issues.

This is a group of companies that we have researched and analyzed to find out what other companies are doing and what sort of best practices they employ.

Let’s try looking at some examples of the types of strategies Japanese companies employ overseas: “Let’s break into this market since it’s growing” or “Let’s acquire this company since its business plan shows it making a profit.” Most of these strategies paint an optimistic story based on analyses of external environments, and rarely incorporate discussions on your company’s intrinsic strengths.

Or rather, these companies stop thinking as soon as discussions regarding their company’s strengths come up.

In addition, Japanese companies must free themselves from the spell placed on them regarding past successes and best practices. Up until now, top managements of Japanese company would rely on their own experiences with successes and principles for achieving success. But despite already seeing changes in the market protocols, these companies continue to consider strategies that are based on the same techniques and approaches used in the past, and conduct detailed and nit-picking reviews of strategies and tactics proposed by those on the ground level. All of this is nothing more than a big waste of time.

3: Decreased competitiveness due to the postponed resolution of substantial issues

We would like to make a proposal that would address the issues facing Japanese companies.

Free yourselves from spending so much time and effort on considering strategies that are unrealistic and cover up your shortcomings in an attempt to appear attractive for IR purposes. There is no point in continuing to look at past successes and making comparisons with global companies.

Japanese companies must tackle these critical issues at hand with the highest sense of urgency, namely, the Conglomerate and Japanese Discounts. They must also quickly realize that the competitive gap between Japanese and global companies will continue to widen if they put off these issues.

So how should these companies overcome these discounts?

The root cause of this state of affairs is the existence of “Gap” and their exponential increase due to the formation of conglomerates. Numerous management consulting firms and leading academics are advocating a framework that suggests that management should be viewed in a systematic manner and issues should be analyzed.

However, there is no doubt that all Japanese companies are putting in their utmost effort on a daily basis to resolve the issues in each of these individual areas. We believe that the relentless effort these companies have invested in making improvements has become a part of their DNA, with some companies achieving excellent results.

As businesses have become increasingly complex in recent years in terms of their business, region, and function, we are often reminded that not all issues are derived from this framework.

In the field of consulting, much is made of cross-functional issues, especially when “the interplay between functions is not well aligned.” These issues provide us with a hint.

In essence, we believe companies that have fallen into a Conglomerate and Japanese Discount may have issues that can be found between the various items found in the aforementioned framework.

“Gap” issues may arise in proportion to the number of businesses, regions, and functions in development, with issues requiring a resolution increasing exponentially.

This is what makes the management of a conglomerate so difficult.

Therefore, more attention should be placed on the existence of these countless “Gaps,” with an effort being made to eliminate and tie them together.

Instead of spending an enormous amount of time on strategic considerations, priority should be given to solving the problems of the Conglomerate and Japanese Discount, and towards implementing reforms that will stop the bleeding from these “wounds,” also known as "Gaps."

(Continued in the next edition)

What the future holds for Japanese conglomerates Chapter 2: Overcoming the Conglomerate Discount Bookmark has been added

What the future holds for Japanese conglomerates Chapter 2: Overcoming the Conglomerate Discount Bookmark has been removed

An Article Titled What the future holds for Japanese conglomerates Chapter 2: Overcoming the Conglomerate Discount already exists in Bookmark library