Foreign investment in Vietnam has helped drive its economy closer to “Asian Tiger” status. However, US trade tensions with China, the threat of inflation, and increasing automation could weigh on future growth.

Vietnam continues to ride the wave of foreign investment and low-cost manufacturing. Its robust trade ties are likely to support export-driven growth in the medium term. However, growing trade tensions between the United States and China, if escalated further, could slow global trade and put the brakes on Vietnam’s economic growth. There are other risks too—wages are rising quicker than productivity, and automation in manufacturing could possibly displace millions of workers over the next decade or two.

The Nikkei purchasing manager’s index for manufacturing in Vietnam touched a multiyear high in June 2018. Strong global demand resulted in manufacturing output accelerating for the third straight month in June. As a result, manufacturers have been hiring more workers.2 Quick growth in manufacturing employment through 2017 is therefore likely to continue through 2018 (figure 1). 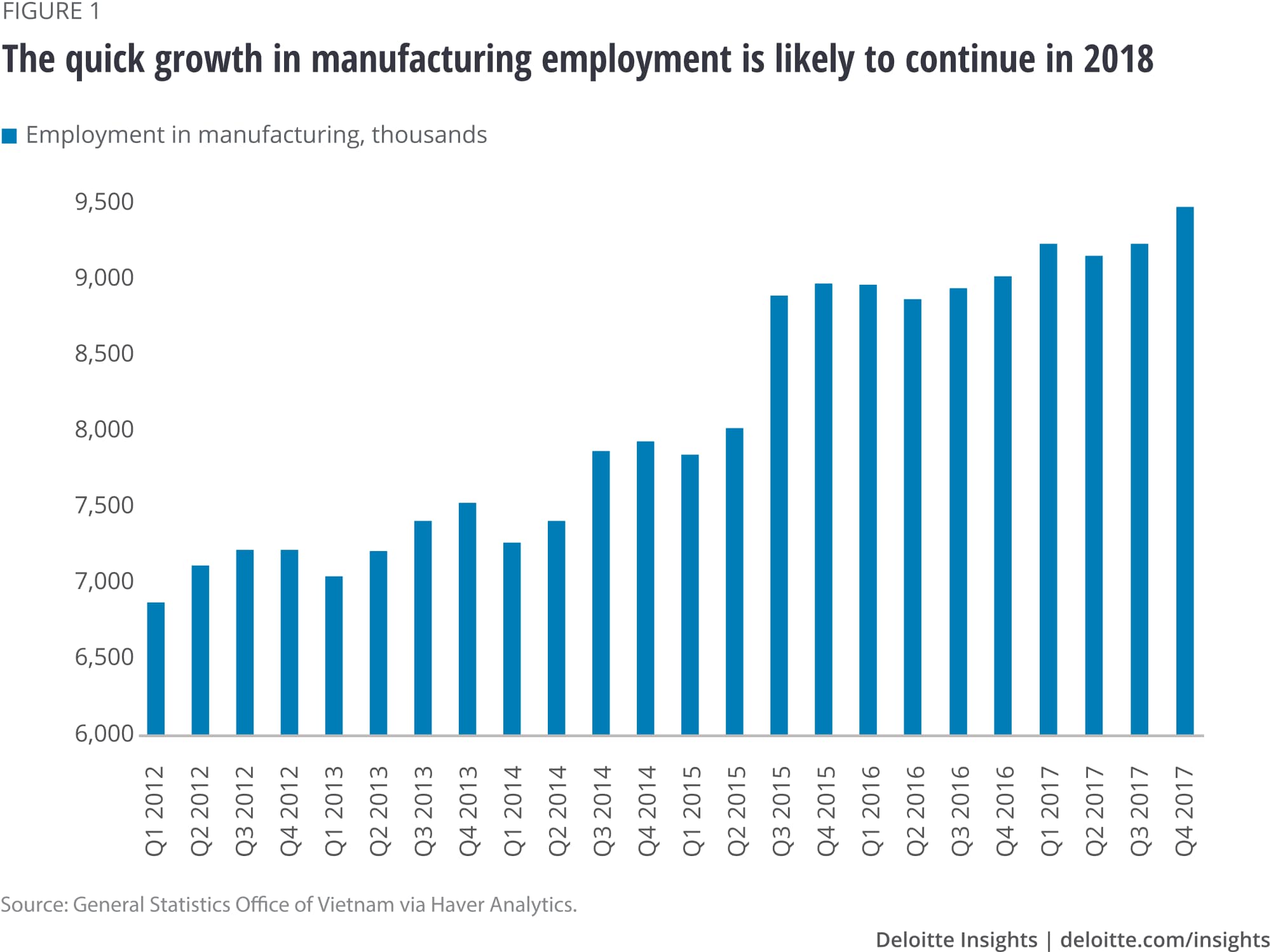 Vietnam’s promise as a low-cost manufacturing hub continues to hold strong. However, foreign direct investment (FDI) seems to be diversifying away from the sector in recent times (figure 2). From 2012 to 2016, newly registered FDI in manufacturing accounted for 70 percent of all newly registered FDI in the economy. However, in 2017 and in the first half of 2018, manufacturing’s share of new FDI dropped to about 35 percent as investors shifted capital to the real estate sector. The shift of investment capital to real estate, in Hanoi and Ho Chi Minh, is likely due to the easing of rules on foreign ownership of property in 2017; it is also a vote of confidence in favor of Vietnam’s economic prospects. 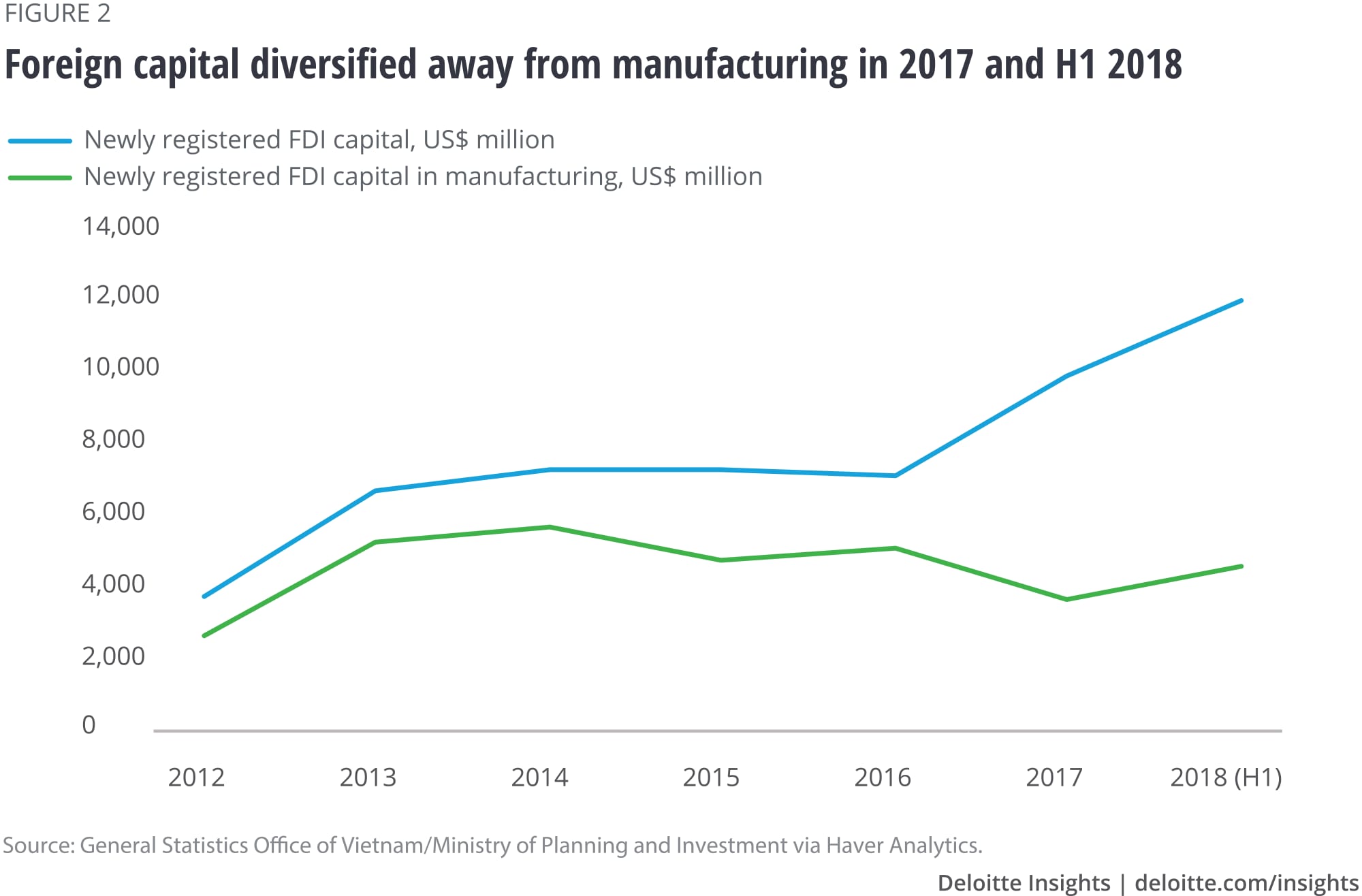 Even though attractive real estate deals might be shifting investor focus, it is highly likely that key manufacturing sectors will continue to attract foreign investment given Vietnam’s solid export performance. Total exports increased a robust 16 percent from a year ago in the first half of 2018. Key manufacturing verticals—phones, electronics, textiles, and footwear—accounted for 50 percent of all exports during the same period. Foreign investment into these sectors is therefore unlikely to dry up any time soon especially as Vietnam continues to sign free trade agreements.

Vietnam has been ahead of the game when it comes to signing free trade deals—the country has signed 16 bilateral and multilateral free trade agreements.3 Vietnam is a member of the Association of South East Asian Nations (ASEAN) and is an active participant in making ASEAN a single market through the ASEAN Economic Community. Beyond Southeast Asia, Vietnam has completed trade agreements with the United States, the European Union, Japan, South Korea, and the Eurasian Customs Union. It is also one of the 11 nations that are part of the Comprehensive and Progressive Agreement for Trans-Pacific Partnership (CPTPP).

These strong trade ties could stand Vietnam’s export-oriented economy in good stead by allowing it to tap into lucrative consumer markets while also allowing foreign investment to flow into the local economy. For instance, the recent trade deal with the European Union—which is expected to be ratified in 2018—will eliminate import tariffs on 99 percent of all goods within a decade and therefore allow Vietnamese manufacturers access to the vast and wealthy European consumer market, while members of the European Union can tap into Vietnam and the ASEAN region. In fact, European investment in Vietnam has already accelerated, with 24 EU member countries having made investments worth a total of US$ 21.5 billion as of 2017.4

However, trade tensions between the United States and China could pose a threat. An all-out trade war could slow global trade, and in turn, Vietnam’s economy. In the short term though, tariffs imposed on China might just benefit Vietnam. Low-cost manufacturers are likely to expedite plans to shift production from China, where wages are already considerably higher, to Vietnam.

How long will low labor costs be an advantage to Vietnam?

Rising labor costs in China have indeed worked to Vietnam’s advantage as many manufacturers have already shifted entire production facilities across the border. This trend is likely to continue through the medium term. Made in China 2025—China’s intensive effort to climb the manufacturing value chain to higher value-added manufacturing—also likely contributes to low-cost manufacturers viewing Vietnam as a favorable base in the medium term. 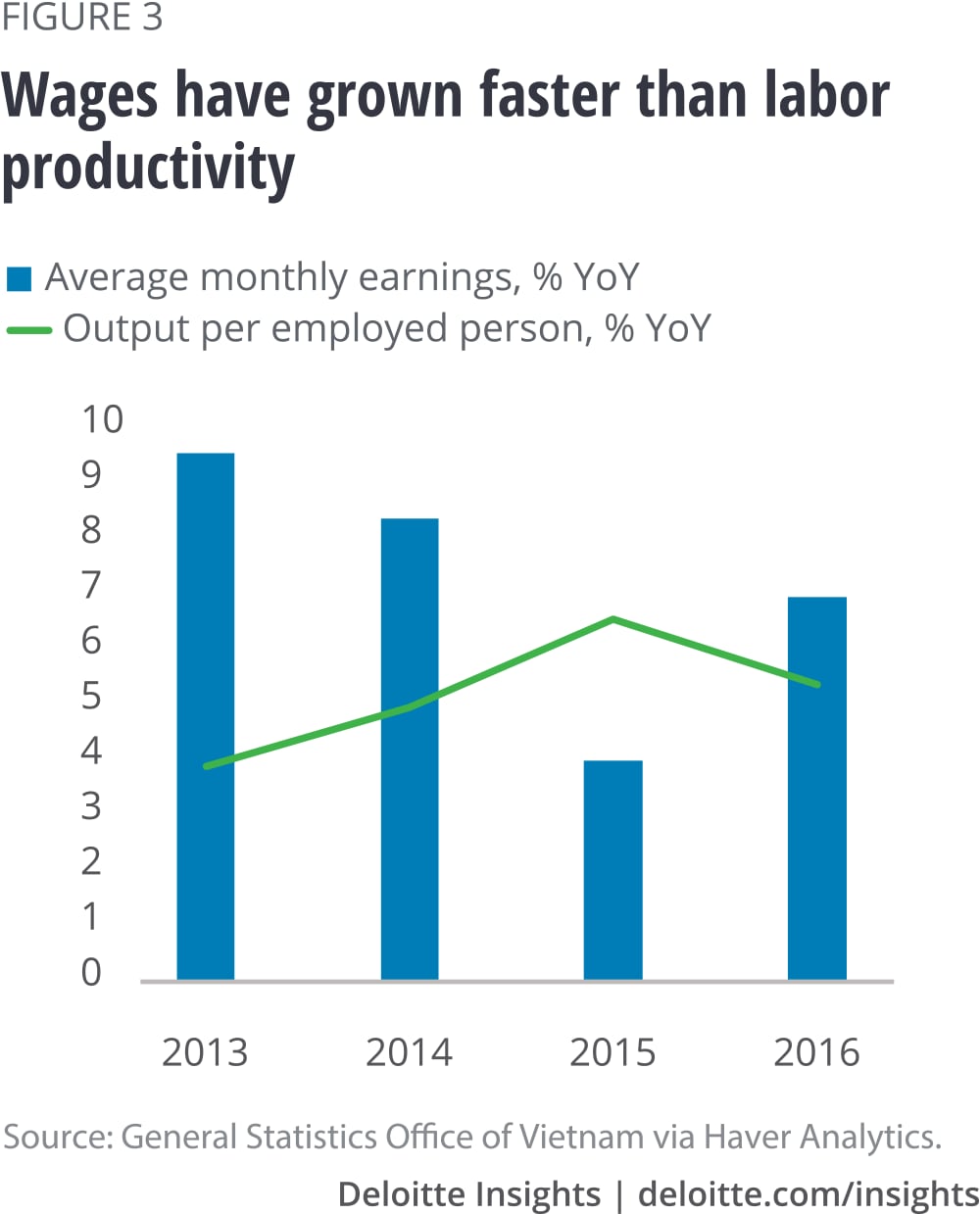 Automation is another potential problem—one that is likely to draw greater attention in the medium to long term. Industry 4.0 or the Fourth Industrial Revolution presents the risk of low-skill labor-intensive jobs being completely replaced by machines,7 but this is unlikely to happen in the short term. In the case of Vietnam, increased mechanization could provide a much-needed boost to productivity without hurting job growth. However, the advanced stages of automation could put millions of workers at risk of losing their jobs. Indeed, Made in China 2025, while possibly pushing low-cost manufacturing to Vietnam in the short to medium term, may pose a threat in the long term. While the initial focus on higher value-added manufacturing in China might encourage low-cost manufacturers to shift to Vietnam, widespread automation across manufacturing in China could result in low-cost manufacturing shifting out of Vietnam and back to China as labor-intensive techniques are supplanted by capital-intensive production at higher productivity, lower costs, and better quality.

According to the United Nations International Labor Organization, more than 56 percent of all employment in Vietnam, Cambodia, Indonesia, the Philippines, and Thailand are at high risk of displacement due to automation over the next decade or two.8 Vietnam could use this looming threat as an opportunity to upskill and reskill its workforce. However, to fund any broad-based education and training initiative in the medium term, Vietnam will likely need to keep making hay (and smartphones and garments) while the proverbial sun shines brightly.

Vietnam: Economy continues robust growth in 2018 has been saved

Vietnam: Economy continues robust growth in 2018 has been removed