US government agencies have been virtually the only financial institutions providing new financing for home mortgages since the mortgage meltdown. Only recently have private-sector lenders been willing to provide new money for homeowners.

If there was ever an asset class global investors should have learned to avoid, it is US mortgages. The British may once have talked of investments being “safe as houses” but in the United States (and in the United Kingdom as well) securities underpinned by houses turned out to be anything but safe. So after the mortgage meltdown, just who is willing to lend to US homeowners? The answer: Most US mortgages since the financial crisis have been financed through organizations related to the US government. That, however, is beginning to change as private-sector lenders are finding some appetite for US mortgages again. 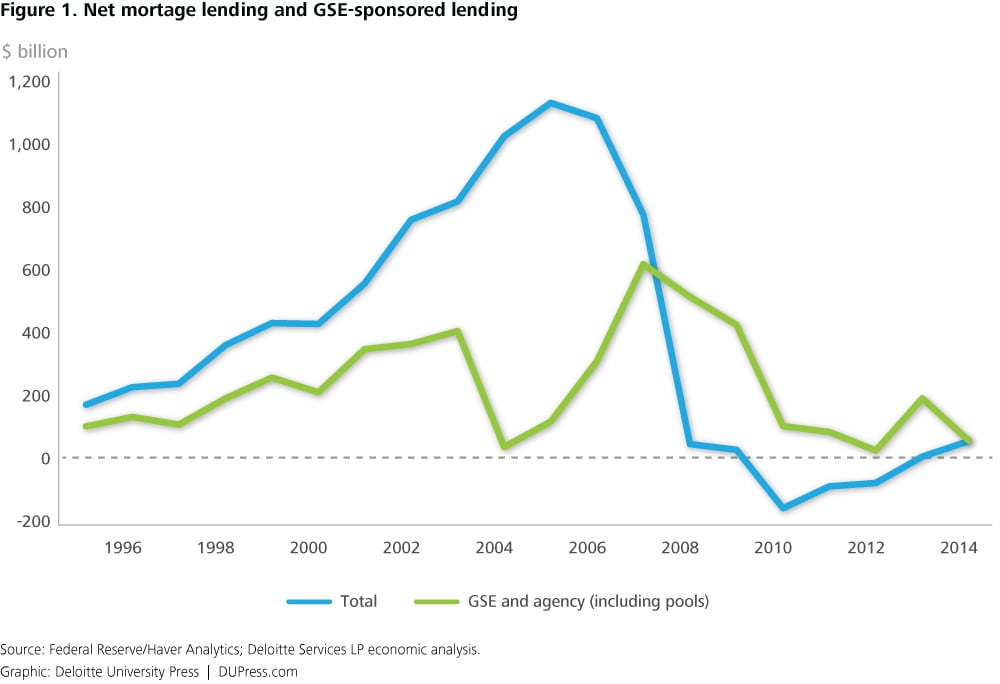 Figure 1 shows how net mortgage lending ballooned in the mid-2000s—and then stopped almost completely.1 In the 10 years to 2005, net mortgage lending quadrupled to a peak of $1.1 trillion. It then dropped sharply over the next two years, and turned negative in 2010. Between 2010 and 2013, investors actually lent less money for mortgages than homeowners repaid. That’s a measure of how little investors wanted to hold mortgages and mortgage paper.

In the 1990s (and before), the GSEs played a major role in mortgage lending. They provided over half of total net mortgage lending in the late 1990s.3 By the early 2000s, private lending started to account for an increasing share of the market. In 2003, the two main GSEs were hit by accounting problems, and in response, the GSEs cut their lending back sharply for a few years. Borrowers did not notice, since private-sector lenders—banks, credit unions, and particularly asset-backed securities (ABS) vehicles—more than took up the slack. In 2005 and 2006, half of all US mortgages were financed through private-label ABS, and mortgage lending was at record levels.

But that was the peak. In 2007, the private-label market began to unravel. Net lending from that sector dropped suddenly, and went negative in 2008. The GSEs picked up their lending pace as the accounting scandals receded into the past, and especially as the US government essentially took them over, and used them to prop up the mortgage market. From 2008 until 2013, they were virtually the only net source of mortgage funds.4

The sudden boom and fall-off in private-label ABS lending is evident in gross flows as well. Figure 2 shows total issues of mortgage-backed securities (MBS) by issuer. Private-label issuers floated $954 billion of mortgage-backed bonds in 2007, and just $56 billion in 2008. Private issues remained below the $100-billion mark until 2013. They still constitute just 10 percent of total issues, and the ABS sector is on net withdrawing funds from mortgage lending. After the financial crisis, the Federal Reserve became the biggest net purchaser of the GSE-sponsored mortgage pools. Fed purchases of agency MBS were greater than net issuance by the GSEs in the six years between 2009 and 2014 (see figure 3). The Fed’s purchases corresponded to the quantitative easing programs in 2008–2009 and 2012. Over the course of six years, the Fed, through its purchases of GSE MBS, essentially supplied $1.8 billion for mortgage lending, a very considerable amount. 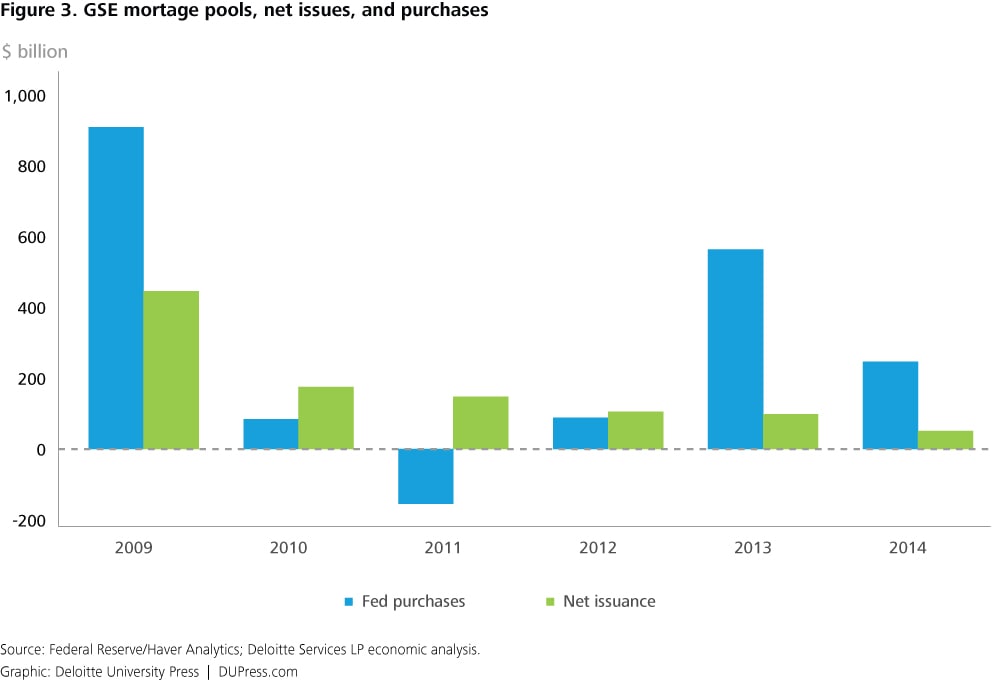 The most recent data show that private-sector investors are picking up the pace of lending. Net mortgage lending was positive in the first two quarters of 2015. Most of the improvement came from domestic banks and credit unions, with ABS issues still not supplying enough to make up for repayments. Net Fed purchase turned negative in the first two quarters of 2015 as QE purchases stopped, and Fed holdings started to fall due to repayments. Terms for mortgages are beginning to loosen as well (figure 4). Once again, the private sector seems to be willing, perhaps gingerly, to pick up additional US mortgage paper. That’s good news—for the Fed, US homeowners, and the global financial system, which may finally be returning to some semblance of “normal.” Just don’t expect global investors to ever be as excited about investment opportunities in US housing as they were in 2006.