What’s the matter with investment?

What’s the matter with investment? Behind the Numbers, May 2014

Why are businesses sitting on top of piles of cash, and if business is so profitable, why are they not putting it back into more and/or better capital investment?

The problem is confined neither to the current recovery nor to the United States. It does seem to be most concentrated in specific industries, particularly ones that use information technology.  Suggested explanations that don’t take those facts into account are missing the mark.

Figure 1 also shows that this decline is part of a trend going back to 1990. Since the end of the 1990 recession, each recovery has been associated with a lower ratio of investment to profits. But that’s after recoveries in the 1970s and 1980s saw the ratio of investment to profits rise. The question of why firms have been spending less of their profits on new capital since 1990 can be turned around to become a question of why firms started spending more of their profits on new capital between 1967 and 1980. 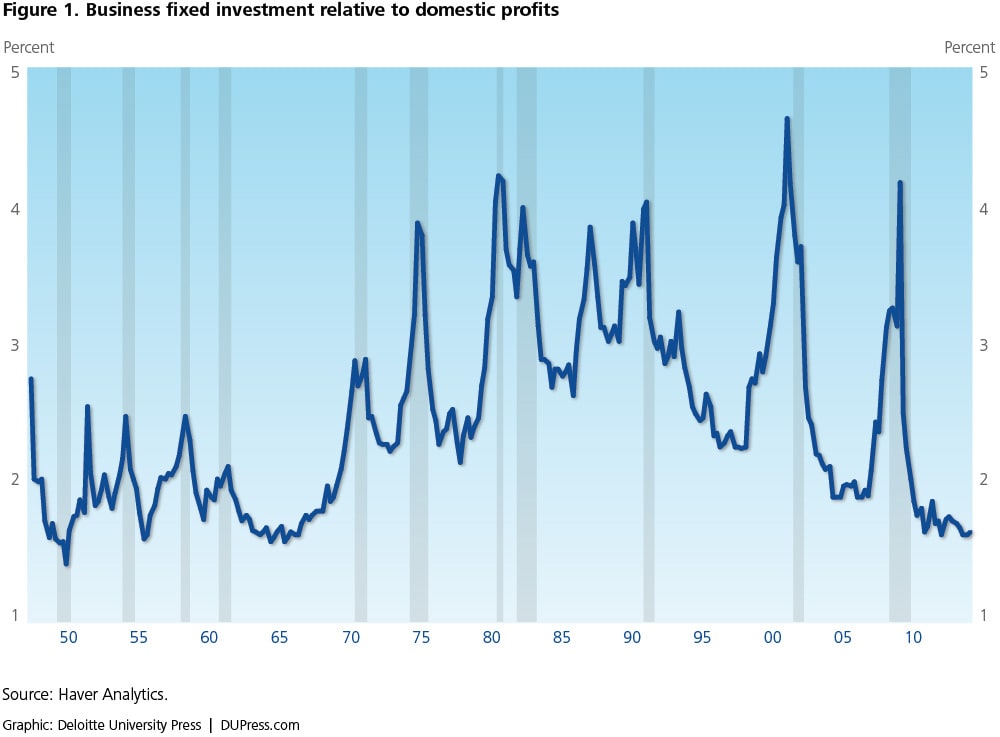 Figure 2 shows the ratio of investment to domestic profits for the last six recoveries (indexed to 100 at the beginning of the recovery). The current recovery has clearly seen a poor performance of investment spending relative to profits compared to most other recoveries. It’s not the worst, however. That dubious distinction belongs to the recovery from the 2001 recession, when firms were even stingier than in the current recovery (given the relatively higher investment-to-profits ratio they started with). 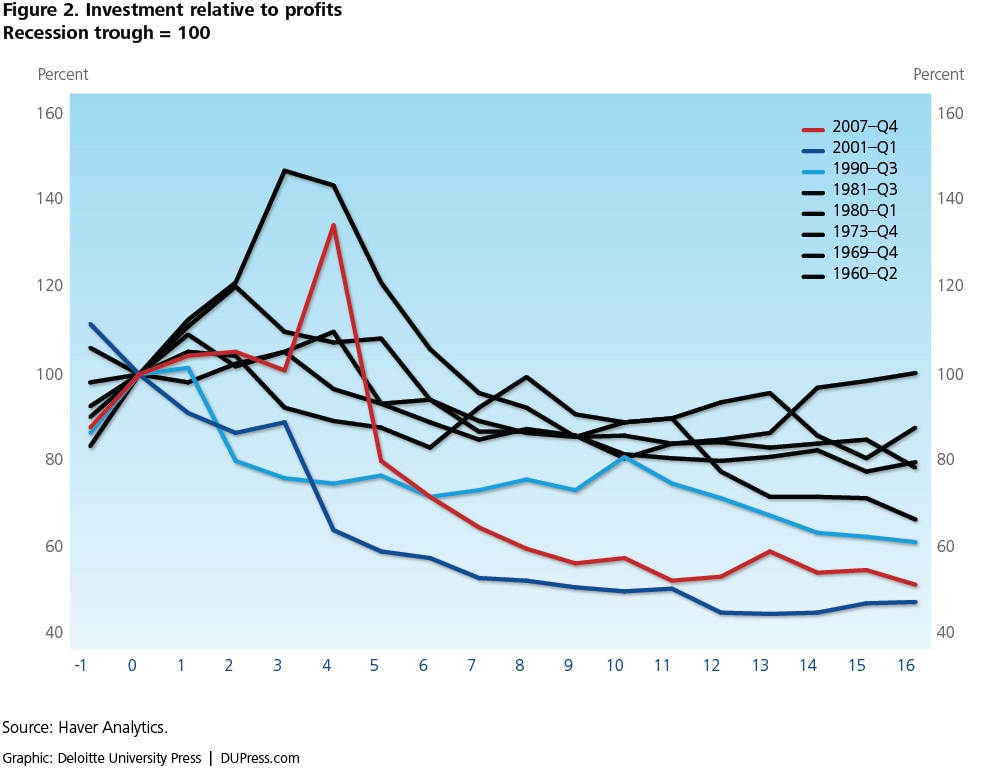 The last three recoveries have seen the weakest recovery of investment relative to firm cash flow. Most economists have noticed that job growth has been slow in the past three recoveries. The recovery after the 1990 recession was, after all, the original “jobless recovery.” What appeared to be a novelty in 1992 now seems to be a changed business cycle. And it looks like the changes are not just in job growth, but in investment spending as well.

The experience in other countries

Figure 3 suggests that declining investment may be due to a broad global cause. Explanations that appeal to conditions specific to the United States cannot explain why companies in countries as diverse as Germany, Finland, and Japan also reduced the share of profits spent on investment projects. 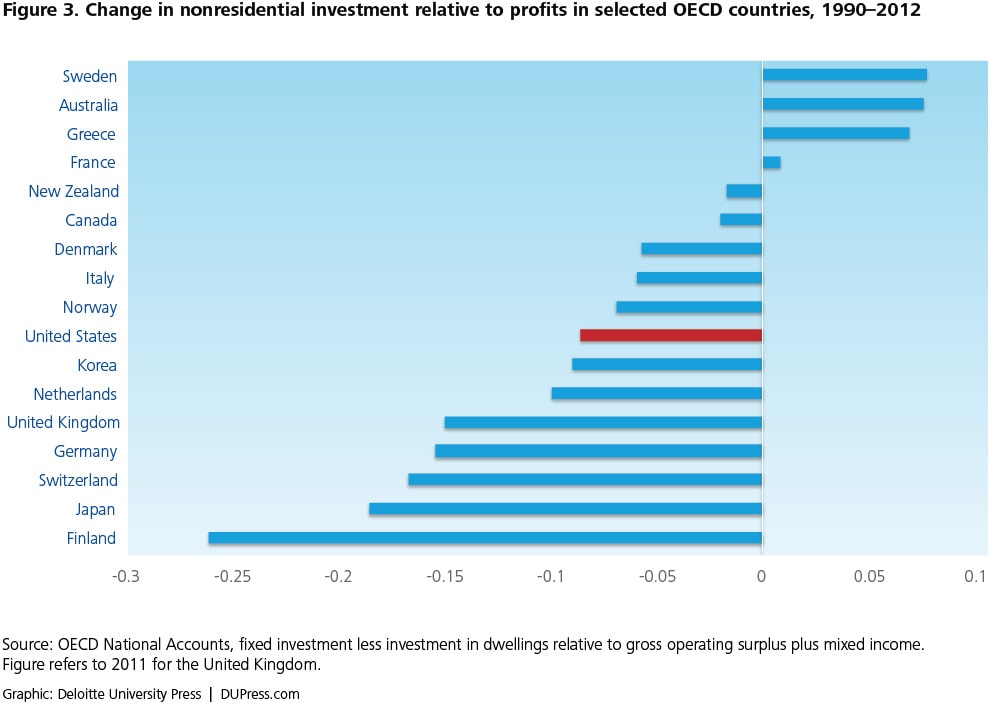 The experience by industry

In the United States, investment’s response to the growth in profits varied substantially by industry, and, oddly enough, by the rate of growth of profits in that industry. It appears that the faster profits grew in an industry, the more the industry’s investment-to-profits ratio fell. Figure 4 shows the decline in the ratio of profits to investment by industry compared to each industry’s average annual profits growth. Different industries experienced surprisingly different changes in the relationship between investment and profits. Information spent over 10 times industry profits on physical and intellectual capital in 1998, a ratio that fell to just 2.8 by 2012. Information also had an annual average rate of growth of profits of 16 percent, not much less than top-preforming mining and finance. 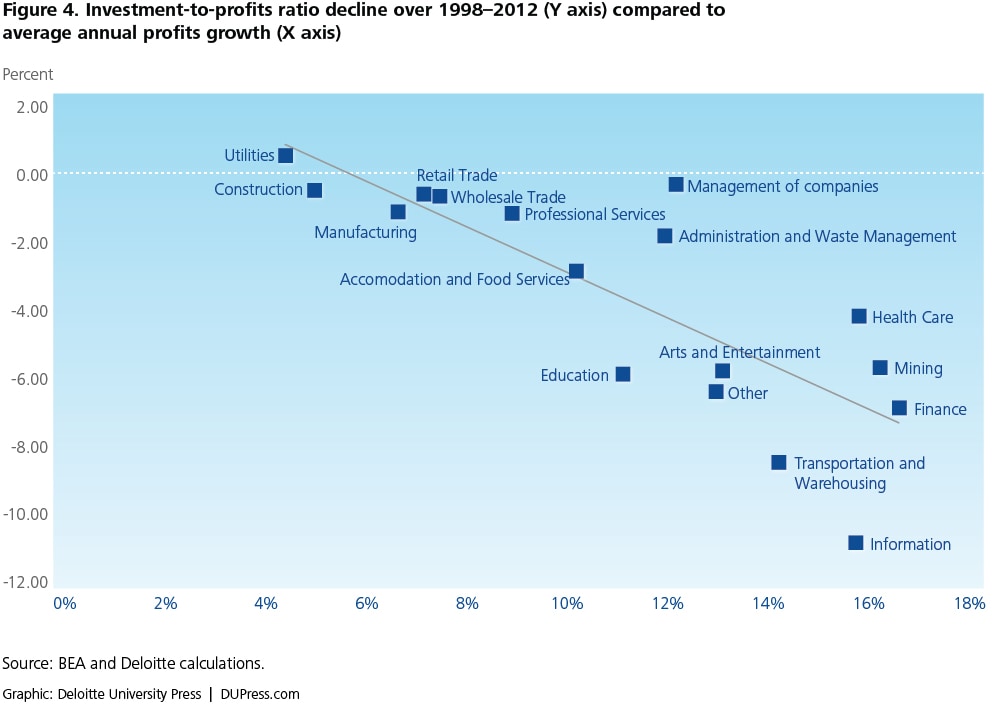 Goods-producing industries and wholesale and retail trade saw relatively small declines in investments relative to profits and relatively slow profits growth. Services industries such as health care, education, and finance saw the largest declines in investment and the fastest profits growth. The high correlation (80 percent) between profit growth and lack of investment by industry is an important feature of the weak investment spending that should be considered more carefully. The combination of that relationship and the prominence of industries such as information and finance in contributing to the decline in investment relative to profits suggest that the increasing role of information processing equipment may be an important driver of this phenomenon.

The data presented here doesn’t provide a definitive answer to the question of why companies seem to be ploughing less of their profits back into investment spending. However, the decline in investment relative to profits isn’t because of broad recent events such as the Obama administration’s regulatory policies, or the Affordable Care Act, or high US corporate tax rates. The decline is a longer-term phenomenon that is international in scope and affects industries differently. Plausible explanations must take that into account.

Some other potential explanations that have been advanced and that might be reasonable (with links to a representative argument): China’s entry into the global economy,2 an increase in corporate market power,3 or an increasing corporate interest in boosting short-term cash flow at the expense of longer-term investment.4 Each of these is consistent with the long-run nature of the trend as well as the fact that we observe it in other developed economies.

The most likely explanation seems to be the changing nature of technology. The decline in the United States is concentrated in industries—such as information and finance—that use information technology intensively, and it has been a feature of the economy since 1990. That suggests (although it certainly does not prove) that the increasing importance and declining cost of information processing equipment may be a key to understanding the decline in investment spending relative to profits.

What’s the matter with investment? has been saved

What’s the matter with investment? has been removed

An Article Titled What’s the matter with investment? already exists in Saved items