In 1983, America’s education world was shaken up by the report A Nation at Risk, with its memorable introduction:

“If an unfriendly foreign power had attempted to impose on America the mediocre educational performance that exists today, we might well have viewed it as an act of war.”1

This report was considered shocking by many because the United States had long expected top-notch results from its education system. In the words of the report, it was “unimaginable” that other nations would match or surpass the United States’ educational attainments.

Today, our nation is no longer at the top of the global education standings. Though the United States spends a greater proportion of its GDP on education than other OECD countries, it generally ranks in the middle of the pack in terms of math and reading scores.2

Since 1983, the K–12 education landscape has been marked by political battles as well as a wide array of reforms, including the federal No Child Left Behind effort. As technology evolves and experimentation of various sorts provides data to guide reform, we are likely to see a continued focus on educational innovation.

While there is no shortage of political disagreement on the topic, there is one aspect of education policy upon which both Democratic and Republican governors seem to agree: States should lead and the federal government should allow them to do so. In 2017, the National Governors Association released a policy statement on education that stresses this point: “Governors believe federal education policy should embrace a stronger state-led accountability system . . . [federal law should] recognize the proper, leading role of governors and other state officials to collectively govern education.”3 That shift back to states appears to be already underway, as the Every Student Succeeds Act, which became law with bipartisan support in December 2015, gave states greater flexibility in terms of setting standards as well as in the areas of curriculum, pedagogy, and teacher professional development.

Issue by the numbers: K–12 education 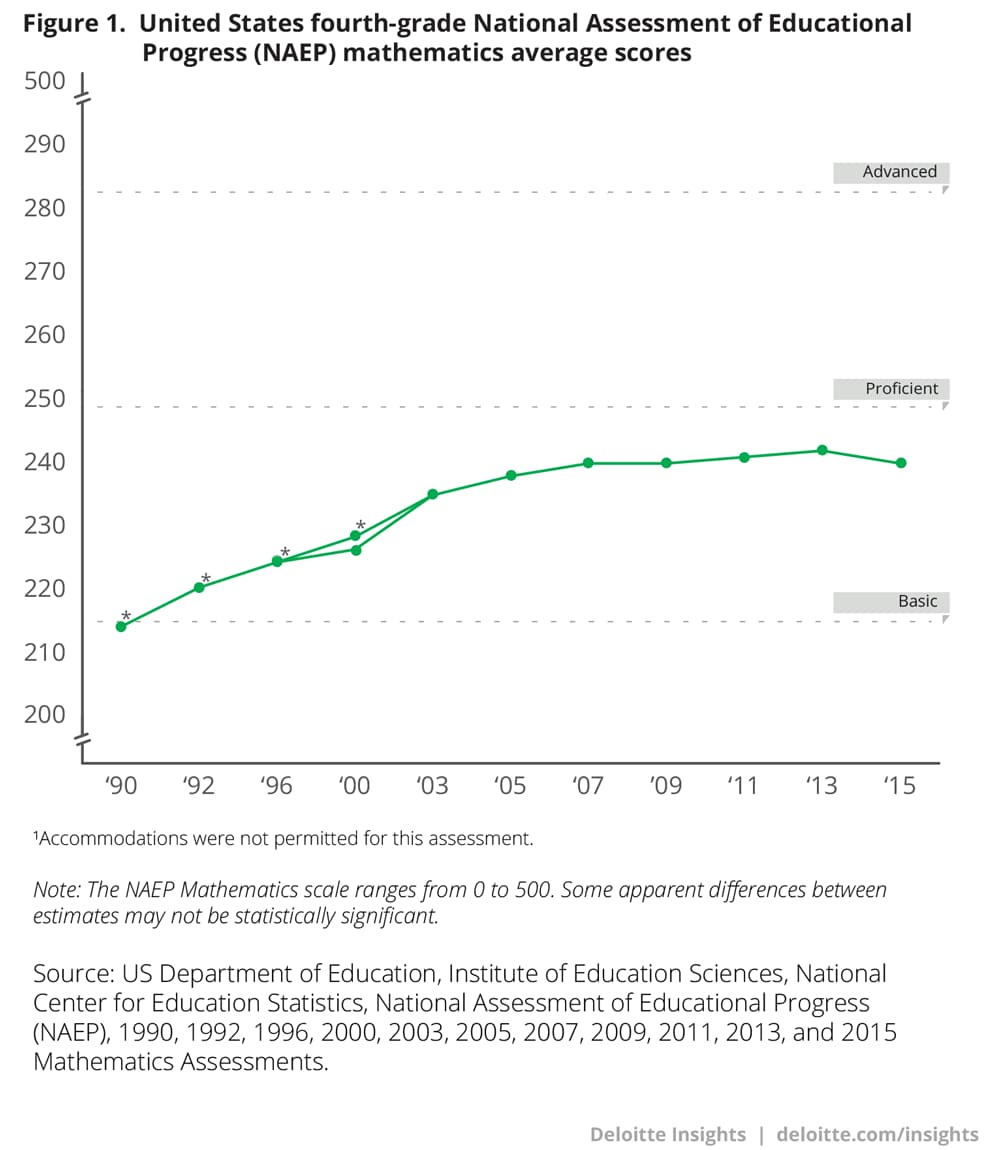 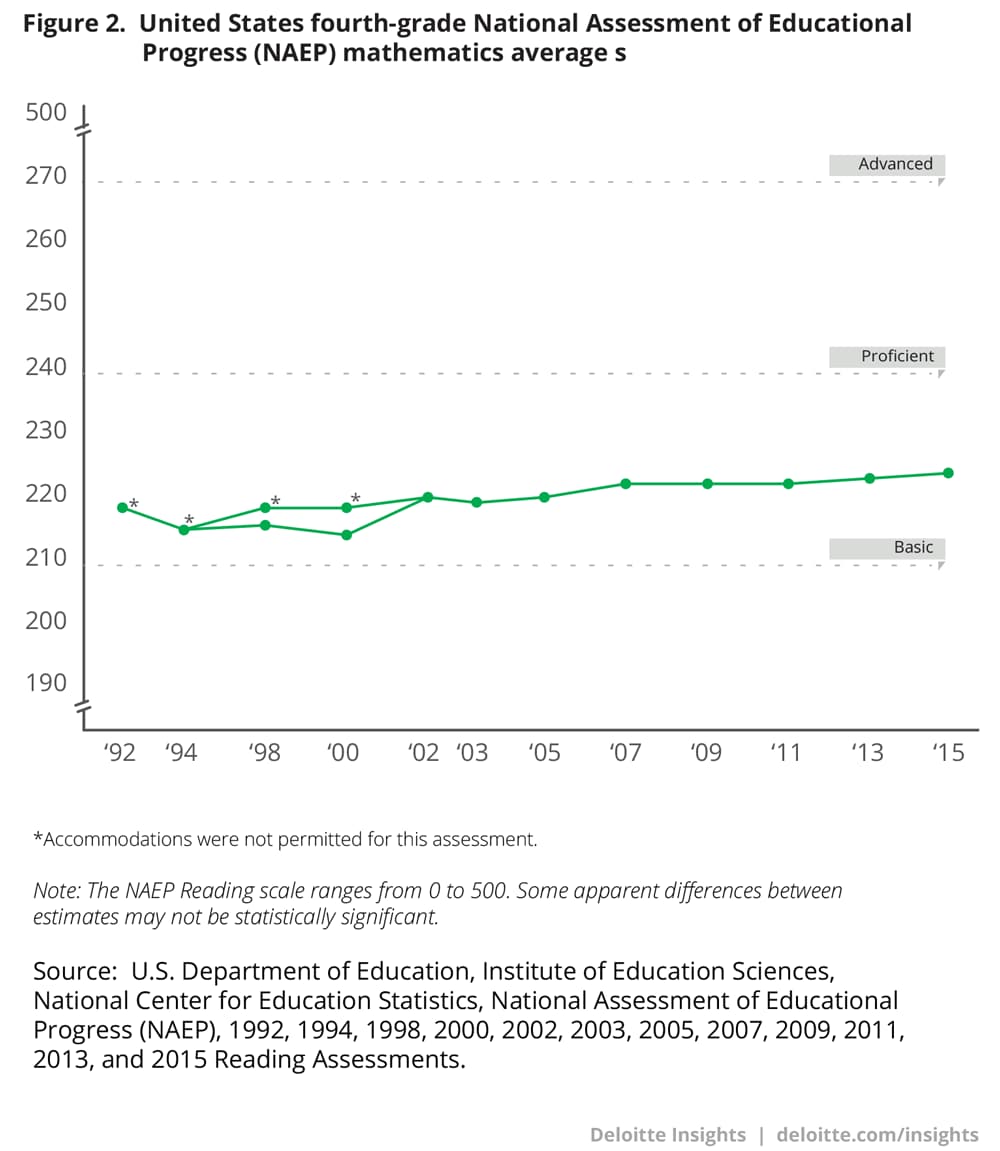 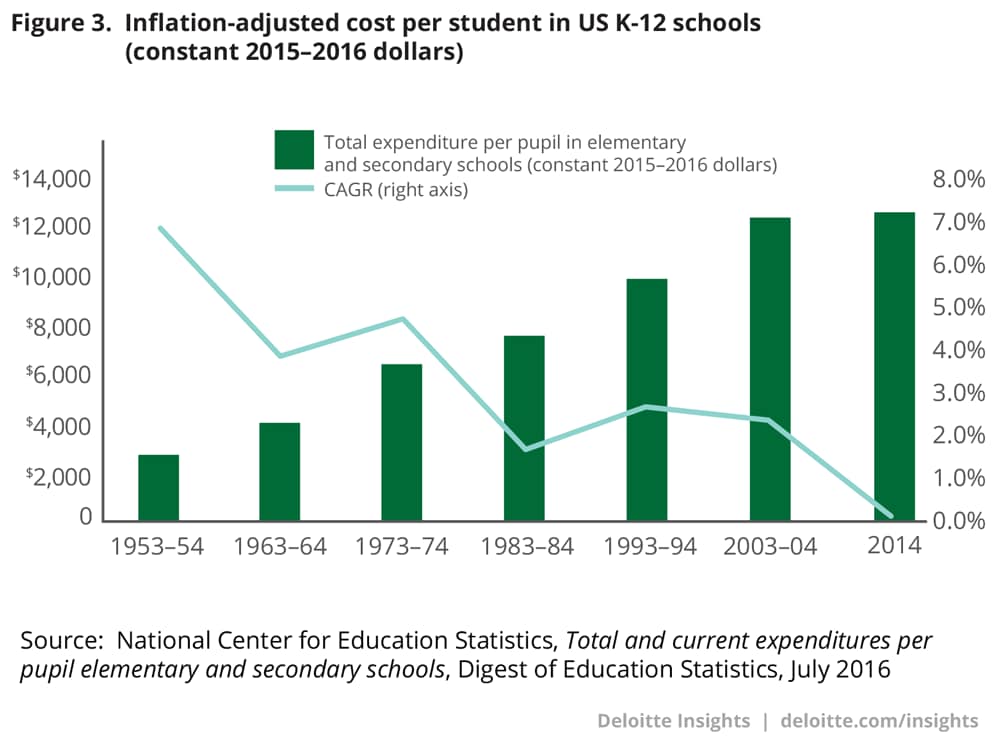 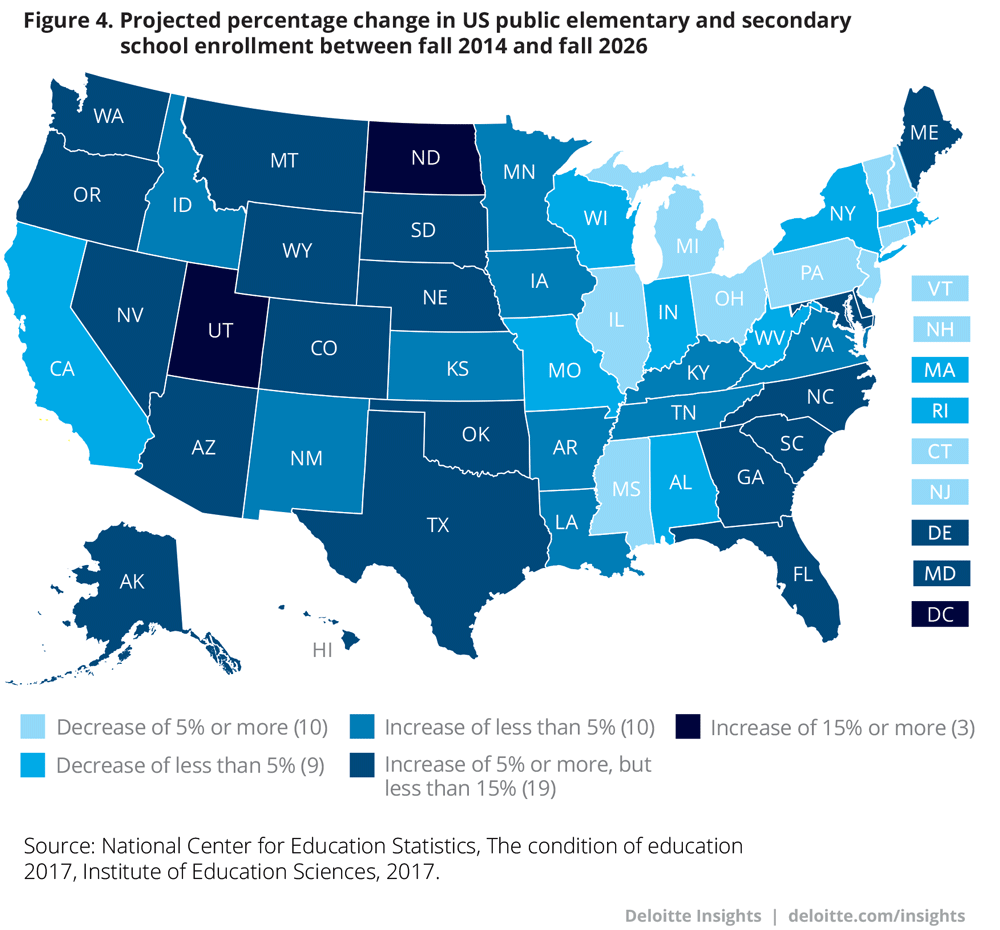 Education reform used to center on changes to traditional K–12 schools. Today, education innovation seems to be a much broader term. Rethinking education often starts with rethinking potential learners, from the very young through children in secondary school to people in their working adulthood. It also may mean reconsidering the notion of a public school, requiring fresh thinking about school governance approaches as well as about ways to deliver an effective education experience to students, teachers, and parents.

Coming to school ready to learn

Education doesn’t happen in a vacuum. Children grow up in an ecosystem of their family, community, and school. Closing the economic achievement gap has been a regular goal of educational policy and education philanthropists alike, but the debate has often been framed as one of “fixing schools” or “fixing poverty.” Too often for children growing up in poverty, however, these three dimensions can reinforce each other in a negative way.11

The challenges of school preparedness and family dysfunction are real, and work is being done to ensure students arrive at school “ready to learn.” Some states, such as Michigan, are taking steps toward greater involvement in pre-K education to help children be ready to learn when they arrive at school.

The commission’s recommendations encompassed a broad view of the state’s education mandate. The report notes: “Michigan’s 21st-century economy and educational goals require an education system that is seamless and accessible to all, from prenatal through career.” The report’s recommendations included:

Teacher quality is widely viewed as one of the most important variables in student success. Numerous reforms have been advanced to improve the situation, from curtailing tenure to just-in-time professional development. Other reforms have focused on measuring teacher performance—something that can be very difficult to do—in order to effectively implement pay for performance.

A combination of live instruction and digital augmentation tools may help to boost the effectiveness of teachers through the enhanced use of technology. Digital education materials include educational software, games, videos, podcasts, and other media that can be accessed through laptop and desktop computers, tablets, and mobile phones.

Deloitte’s 2016 Digital Education Survey found that many teachers, parents, and students are embracing these tools with enthusiasm, and a majority of these stakeholders believe that “digital education” makes a positive difference in learning outcomes and experiences.13

The survey found that at present 80 percent of teachers use digital education at least once a week, and 75 percent of teachers believe that digital content could replace print textbooks within the next decade. The biggest hurdle to adoption? For teachers, lack of training appears to be one of the biggest barriers to use of educational technology inside and outside the classroom.14

Thanks to the advanced technologies available today, it is possible to securely deliver instructional content personalized to an individual student’s ability, interest, and learning style. As a case in point, Khan Academy’s “anytime, anywhere” educational model delivers personalized learning to students worldwide and even provides diagnostics and dashboards to teachers.

However, merely adding technology to the classroom might not be enough. Participants in the education ecosystem—school administrations, teachers, students, parents, edtech solution providers, and government educational agencies—could work more closely together to create new digital learning environments. Integrated next-generation technologies will likely make it easier for students of all ages and backgrounds to continue their education for their entire lives, both inside and outside the classroom.15

Making every dollar count for learning

Roughly 40 cents of every public education dollar goes to noninstructional costs—physical infrastructure, food service, security, and so forth.16 A variety of approaches exist that could reduce these costs, potentially allowing states to devote more resources directly to learning.

For example, states can provide incentives for school districts to utilize a shared services approach in which, rather than having each district contract separately for items such as bus transportation or heating oil, the districts could join together to realize economies of scale. Oregon’s Reset Cabinet report estimated that the state could save $40 million a year if school districts shared certain services.17

Closing the workforce skills-employability gap could be important to economic competitiveness. In the past, most governors were either “workforce governors” or “education governors,” but in some cases, these priorities may converge.

Delaware's Pathways initiative is an integrated collection of programs and services intended to enhance the “academic, technology, and employability skills” of secondary school students in Delaware. As part of the national Pathways to Prosperity network, the Delaware initiative seeks to prepare students for high-demand, high-opportunity jobs by linking education and work experiences.18

Allan Ludgate is a managing director of Deloitte Consulting LLP within Monitor Institute by Deloitte. He is based in New York.